The gyroid structure was discovered in 1970 by a NASA scientist

Everything you need to know about the gyroid structure, one of the most advanced—and cool looking— 3D printing infill patterns available in slicer programs.

In 3D printing, infills are automatically generated internal geometries that enable makers to reduce printing times and save on material costs. Common infill patterns include grids and lines, as well as triangular, cubic, and honeycomb structures. These are fairly basic patterns that can be generated in slicer software programs before printing to reduce the density of a 3D printed part. The gyroid infill, for its part, is one of the most advanced and advantageous infill patterns, especially when it comes to achieving the best strength to weight ratio for 3D printed parts. Keep reading to learn more about the 3D gyroid infill pattern, the benefits it offers, and when to use it.

What is a Gyroid Infill?

First thing is first: what is a gyroid? A gyroid is a naturally occurring structure that was discovered in 1970 by NASA scientist Alan Schoen.[1] Its unique structure is characterized by the lack of straight lines and the fact that it is a triply periodic minimal surface (TPMS). TPMS are “surfaces with zero mean curvature and are characterized by local area minimizing which means any sufficiently small patch taken from the TPMS has the smallest area among all patches created under the same boundaries.”[2] In less technical terms, a gyroid is a 3D geometry made up of intersecting 2D wavy lines that create a strong, robust structure.

A gyroid infill refers to when a 3D printed object integrates a gyroid pattern as its internal geometry. In fused deposition modeling (FDM) 3D printing, it is common to generate an infill pattern to decrease the density of the 3D printed part. From the outside, the finished part looks solid, but inside the infill geometry allows for hollow spaces that help save on filament costs and printing time while still providing more strength and resistance than a purely hollow part.

It is also worth noting that with the gyroid structure, it is also possible to 3D print structurally sound objects without a shell—the external layer of the part. Because of the interesting curvature and style of the gyroid infill, some makers choose to integrate the structure into the look of their final part.

In slicer software programs such as Cura, you can adjust infill settings related to the gyroid infill. The most important setting is the infill density. Infill density is represented as a percentage (and is sometimes called infill percentage) and essentially refers to the amount of infill you want. For example, a 3D printed part with 100% infill will simply be a solid part, while a 3D printed part with 50% infill will be half hollow and half filled. The lower the percentage, the more low density the infill will be.

Gyroid infills allow users to minimize the infill density without sacrificing shear strength and resistance. This is because of their continuous structure. While many standard infill patterns, such as grids or hexagons, repeat the same 2D pattern for every layer, the gyroid infill is created through the continuous extrusion of wavy lines and each layer is different than the one before, creating the complex undulating pattern that displays strength and resistance in all directions. 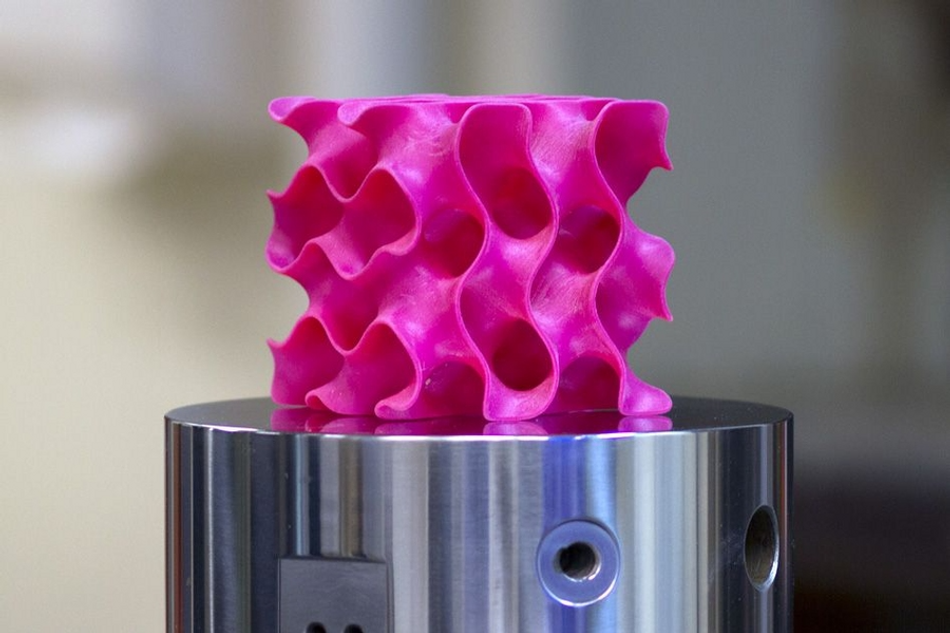 A gyroid infill enables the printing of parts with nearly isotropic properties. Isotropic materials demonstrate the same strength and material properties no matter which direction they are subject to loads or stresses. The pattern of a gyroid infill, while not technically isotropic, imparts similar properties due to its cubic symmetry. This means that 3D printed parts with this type of infill have similar degrees of resistance on all three axes. Most 2D infill patterns, on the other hand, are stronger in one direction.

The gyroid infill has one of the best density to strength ratios of any 3D printing infill. In 2017, MIT researchers discovered that compressing graphene into a gyroid structure with just 5% density of steel could achieve a strength 10 times greater than steel. This discovery could also be translated to other materials, like 3D printed filaments like PLA and ABS, where the gyroid structure can improve the overall material strength properties.[4]

Thanks to the near-isotropic strength provided by the gyroid structure and the excellent strength to infill density ratio, less filament material is needed to achieve 3D printed parts with superior properties. In other words, it requires less filament to achieve the same strength as many other infill patterns with higher densities. It therefore goes without saying that this feature can also save on material costs and can help produce more lightweight parts.

Due to the curvy structure of the gyroid infill pattern, it can actually be faster to 3D print compared to other 3D infills. In an experiment by CNC Kitchen comparing many different infill patterns, the test cube with the gyroid pattern took the same amount of time as the much simpler cubic infill (125%) and was significantly faster than the honeycomb (310%) and 3D honeycomb (288%) infill patterns.[5]

Because gyroid infills are more complex than standard 2D infill patterns, generating the G-code for the 3D printer requires more processing power. If you are working with an insufficiently powerful computer, gyroid infills can therefore be slower to process and generate than simpler 2D infills like grid infill or line (rectilinear) infill.

Unlike infill patterns that use straight lines, gyroid infills are made up exclusively of curvy lines. This means that the 3D printer extruder is continuously moving in wavy motions. If the infill density is too high and the infill waves are too close, the extruder’s movements can create vibrations in the 3D printer, which can lead to 3D printing defects. Fortunately, high densities are rarely required for gyroid infills, so this problem can usually be avoided.

The unique properties of the gyroid infill make it a good option for a number of applications. On the one hand, the infill is one of the most visually interesting infills available in slicer programs. This makes it a great option for making highly aesthetic 3D models. Because you can 3D print gyroid infill parts without a shell, it is possible to create objects like vases, lamps, and other home decorations that put the maze-like 3D pattern front and center. Using a clear filament with shells is another way to display the attractive gyroid pattern within the part. 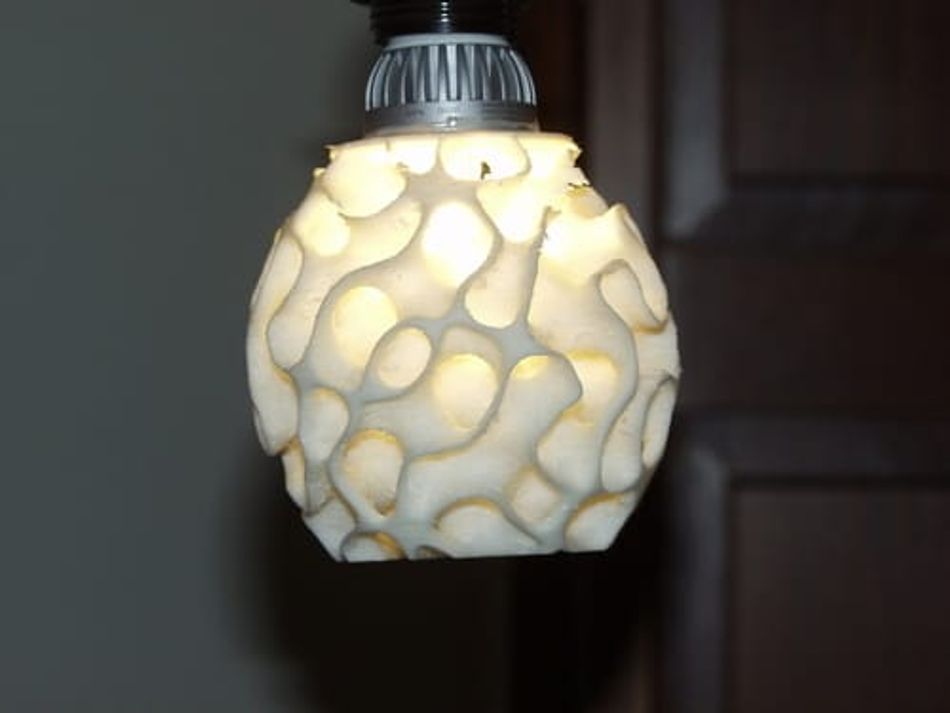 The gyroid infill is one of the more advanced infill patterns available in slicer programs. The unique bio-inspired geometry of the infill offers many advantages, especially if strength and weight are key considerations. As we’ve seen, the gyroid infill offers one of the best strength to infill density ratios and can save users both time and money (in terms of material usage). The gyroid infill also offers a more interesting visual aesthetic than more traditional infill patterns, with a continuous geometry with no straight lines. This unique combination of properties make the gyroid infill a great option for functional components as well as visual 3D printed parts without shells.

From Jet Engines to Satellites: 3D Printing and Aerospace

3D Print Stuck to Bed: What to do?

This week we are going to talk about selecting materials for 3D printing and what you need to consider when making your choice.