A new study by engineers at MIT, Caltech, and ETH Zürich shows that “nanoarchitected” materials — materials designed from precisely patterned nanoscale structures — may be a promising route to lightweight armor, protective coatings, blast shields, and other impact-resistant materials.

The researchers have fabricated an ultralight material made from nanometer-scale carbon struts that give the material toughness and mechanical robustness. The team tested the material’s resilience by shooting it with microparticles at supersonic speeds, and found that the material, which is thinner than the width of a human hair, prevented the miniature projectiles from tearing through it.

The researchers calculate that compared with steel, Kevlar, aluminum, and other impact-resistant materials of comparable weight, the new material is more efficient at absorbing impacts.

If produced on a large scale, this and other nanoarchitected materials could potentially be designed as lighter, tougher alternatives to Kevlar and steel.

“The knowledge from this work… could provide design principles for ultra-lightweight impact resistant materials [for use in] efficient armor materials, protective coatings, and blast-resistant shields desirable in defense and space applications,” says co-author Julia R. Greer, a professor of materials science, mechanics, and medical engineering at Caltech, whose lab led the material’s fabrication.

The team, which reports its results today in the journal Nature Materials, includes David Veysset, Yuchen Sun, and Keith A. Nelson, of MIT’s Institute for Soldier Nanotechnologies and the Department of Chemistry, and Dennis M. Kochmann of ETH Zürich. 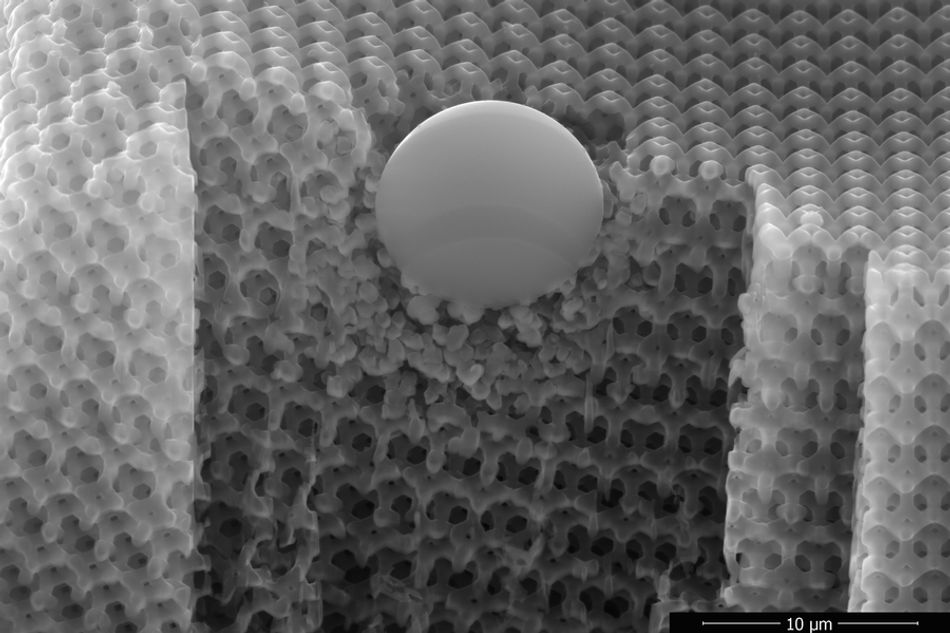 The team tested the material’s resilience by shooting it with microparticles at supersonic speeds, and found that the material, which is thinner than the width of a human hair, prevented the miniature projectiles from tearing through it. Credits:Courtesy of the researchers

From brittle to bendy

“We only know about their response in a slow-deformation regime, whereas a lot of their practical use is hypothesized to be in real-world applications where nothing deforms slowly,” Portela says.

The team set out to study nanoarchitected materials under conditions of fast deformation, such as during high-velocity impacts. At Caltech, they first fabricated a nanoarchitected material using two-photon lithography, a technique that uses a fast, high-powered laser to solidify microscopic structures in a photosensitive resin. The researchers constructed a repeating pattern known as a tetrakaidecahedron — a lattice configuration composed of microscopic struts. 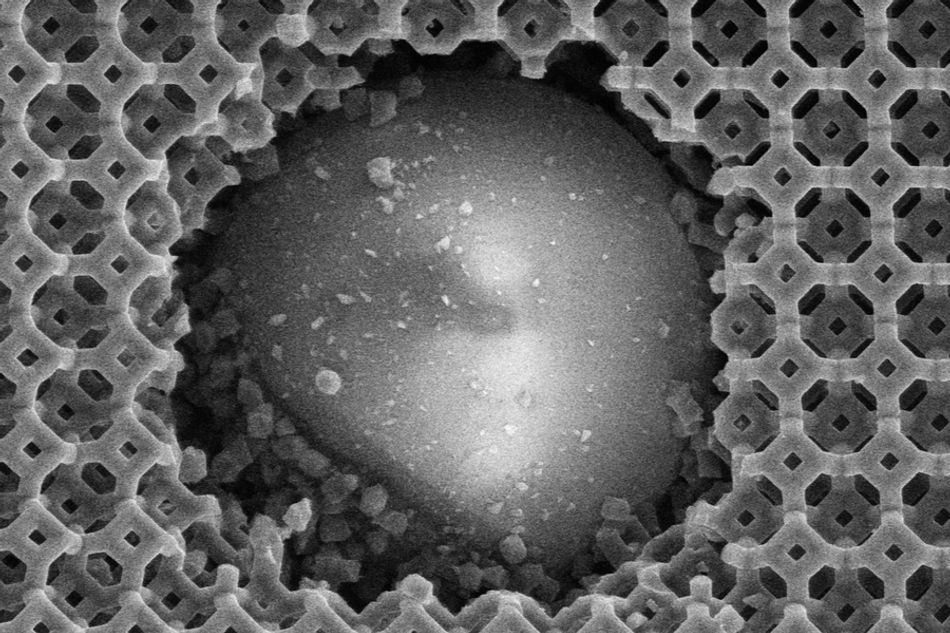 The researchers have fabricated an ultralight material made from nanometer-scale carbon struts that give the material toughness and mechanical robustness. Credits:Courtesy of the researchers

“Historically this geometry appears in energy-mitigating foams,” says Portela, who chose to replicate this foam-like architecture in a carbon material at the nanoscale, to impart a flexible, impact-absorbing property to the normally stiff material. “While carbon is normally brittle, the arrangement and small sizes of the struts in the nanoarchitected material gives rise to a rubbery, bending-dominated architecture.”

After patterning the lattice structure, the researchers washed away the leftover resin and placed it in a high-temperature vacuum furnace to convert the polymer into carbon, leaving behind an ultralight, nanoarchitected carbon material. 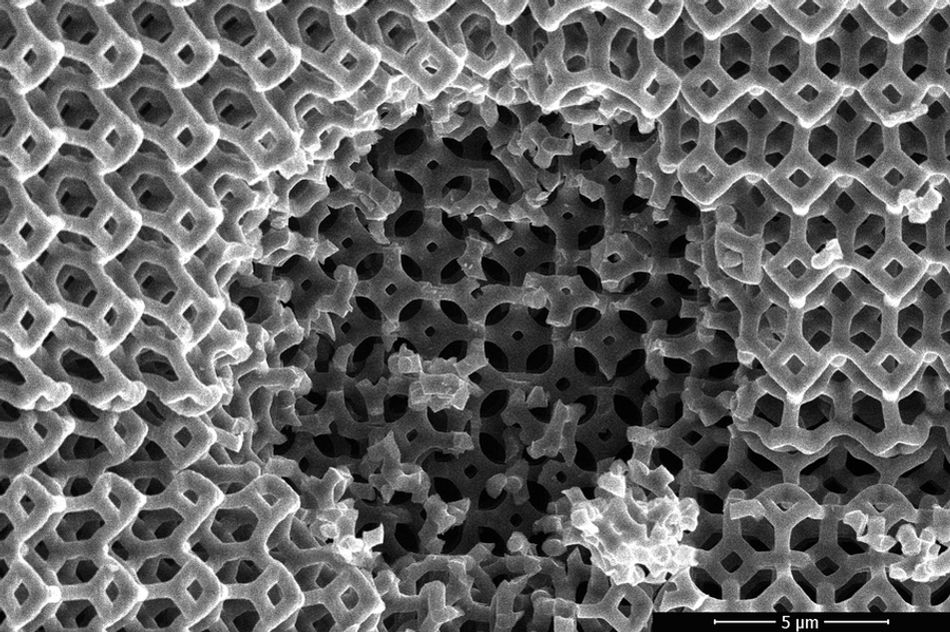 “We show the material can absorb a lot of energy because of this shock compaction mechanism of struts at the nanoscale, versus something that’s fully dense and monolithic, not nanoarchitected,” Carlos Portela says. Credits:Courtesy of the researchers

Faster than the speed of sound

To test the material’s resilience to extreme deformation, the team performed microparticle impact experiments at MIT using laser-induced particle impact tests. The technique aims an ultrafast laser through a glass slide coated with a thin film of gold, which itself is coated with a layer of microparticles — in this case, 14-micron-wide silicon oxide particles. As the laser passes through the slide, it generates a plasma, or a rapid expansion of gas from the gold, which pushes the silicon oxide particles out in the direction of the laser. This causes the microparticles to rapidly accelerate toward the target.

The researchers can adjust the laser’s power to control the speed of the microparticle projectiles. In their experiments, they explored a range of microparticle velocities, from 40 to 1,100 meters per second, well within the supersonic range. 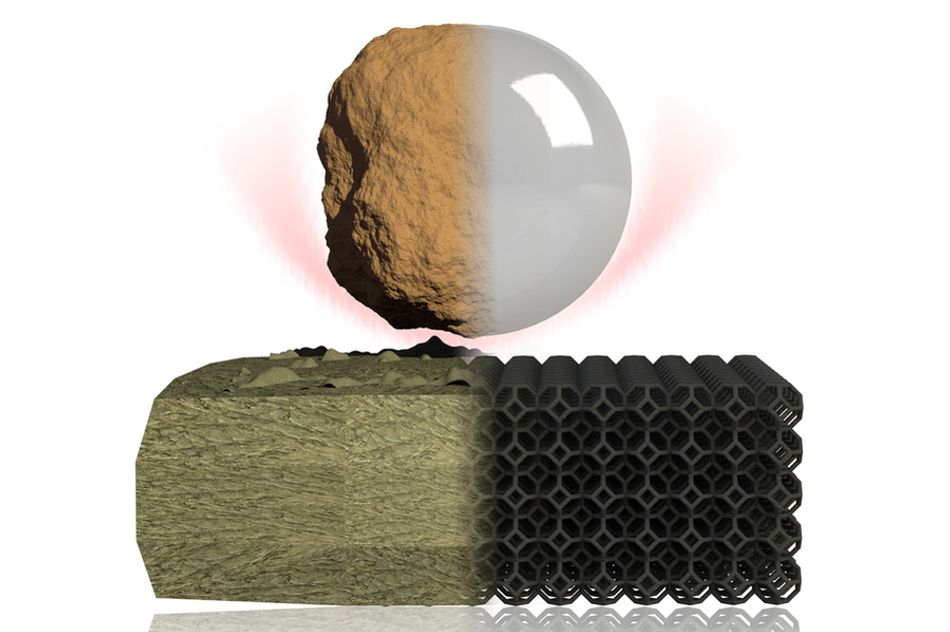 The team found they could predict the kind of damage the material would sustain by using a model for characterizing meteor impacts. Credits:Courtesy of the researchers

Using a high-speed camera, they captured videos of the microparticles making impact with the nanoarchitected material. They had fabricated material of two different densities — the less dense material had struts slightly thinner than the other. When they compared both materials’ impact response, they found the denser one was more resilient, and microparticles tended to embed in the material rather than tear straight through.

To get a closer look, the researchers carefully sliced through the embedded microparticles and the materials, and found in the region just below an embedded particle the microscopic struts and beams had crumpled and compacted in response to the impact, but the surrounding architecture remained intact.

Using a high-speed camera, researchers captured videos of the microparticles making impact with the nanoarchitected material.

“We show the material can absorb a lot of energy because of this shock compaction mechanism of struts at the nanoscale, versus something that’s fully dense and monolithic, not nanoarchitected,” Portela says.

Interestingly, the team found they could predict the kind of damage the material would sustain by using a dimensional analysis framework for characterizing planetary impacts. Using a principle known as the Buckingham-Π theorem, this analysis accounts for various physical quantities, such as a meteor’s velocity and the strength of a planet’s surface material, to calculate a “cratering efficiency,” or the likelihood and extent to which a meteor will excavate a material.

When the team adapted the equation to the physical properties of their nanoarchitected film and the microparticles’ size and velocities, they found the framework could predict the kind of impacts that their experimental data showed.

Going forward, Portela says the framework can be used to predict the impact resilience of other nanoarchitected materials. He plans to explore various nanostructured configurations, as well as other materials beyond carbon, and ways to scale up their production — all with the goal of designing tougher, lighter protective materials.

“Nanoarchitected materials truly are promising as impact-mitigating materials,” Portela says. “There’s a lot we don’t know about them yet, and we’re starting this path to answering these questions and opening the door to their widespread applications.”