Falcon and HALO are ready for the BLUESKY mission, Credit: DLR (CC-BY 3.0)

A clear blue sky without condensation trails and empty streets – this is a typical situation during the Coronavirus lockdown. Traffic, particularly air transport, and industrial production have been reduced worldwide due to the COVID-19 pandemic. There are fewer aircraft in the air and vehicles on the road in Europe than before the pandemic. Air pollution has dropped by 20 to 40 percent, and daily emissions from aircraft have decreased by up to 85 percent. This means that the atmosphere is much less polluted with emissions from transport and industry. A German research team now wants to make rapid use of this unusual situation for the BLUESKY project. Scientists from DLR, the Max Planck Institute for Chemistry, Goethe University Frankfurt, and the research centres at Jülich and Karlsruhe intend to use two DLR research aircraft to conduct a globally unique investigation into the resulting changes in Earth's atmosphere for the first time. DLR's HALO and Falcon research aircraft have been equipped with highly specialised instrumentation and will fly over Germany, Italy, France, Great Britain and Ireland in the course of the next two weeks. They will also fly over the North Atlantic, along the flight corridor to North America.

"DLR is deploying part of its unique research aircraft fleet to exploit an almost unique opportunity. During these missions, the atmosphere will be analysed in a state that could be achieved in the future with sustainable management of human activities. We will observe how the environment changes with the ramp-up of industrial activities. This will give us an entirely new perspective on the anthropogenic influence on Earth's atmosphere," explains Rolf Henke, DLR Executive Board Member responsible for aeronautics research. "Together with our partners, we are making a significant contribution to redefining humankind's activities once the pandemic is under control." 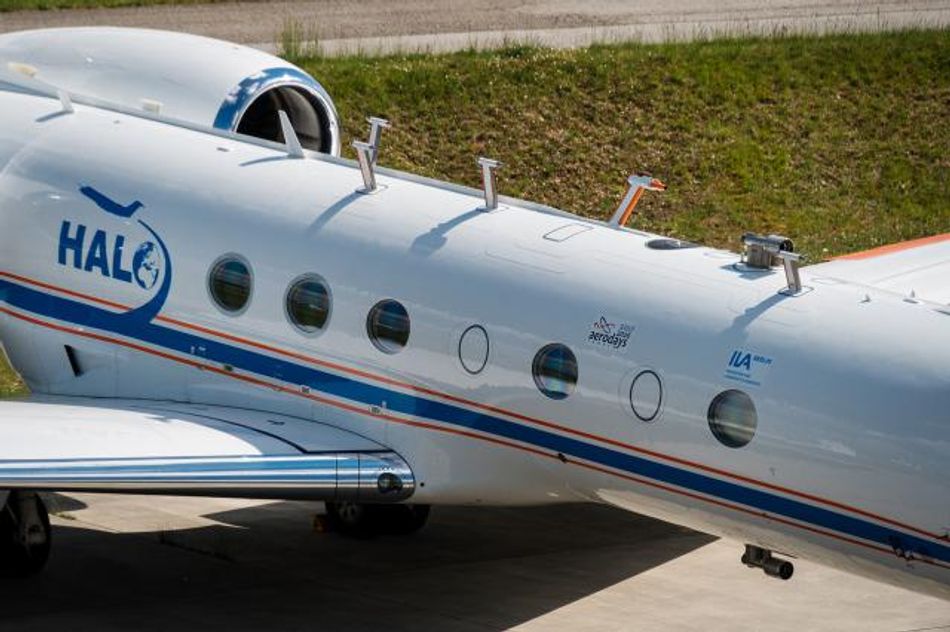 Max Planck Institute for Chemistry, wants to use the BLUESKY missions to clarify whether there is a correlation between the clear blue sky during the lockdown and the prevalence of aerosol particles in the atmosphere. "The unique blue sky of recent weeks cannot be explained by meteorological conditions and the decrease in emissions near the ground. Aircraft may have a greater impact on the formation of aerosol particles than previously thought," says the atmospheric researcher, who is the Scientific Director of the HALO flights. Aerosols, microscopic particles in the air that also influence cloud formation, are finely distributed. They scatter and absorb solar radiation and thus also have an impact on the climate, because they influence the radiation balance of the atmosphere. Aerosols are created, amongst other ways, during the combustion of fossil fuels.

Christiane Voigt, Head of the Cloud Physics Department at the DLR Institute of Atmospheric Physics and Scientific Director of the Falcon flights, also sees a unique opportunity with BLUESKY. "The current state of the atmosphere represents a kind of 'zero point' for science. We will be able to measure a reference atmosphere that is only slightly polluted with emissions from industry and transport, including aviation. This gives us a unique opportunity to better understand the effects of the anthropogenic emissions prior to the shutdown." The atmospheric physicist emphasises that, only through the cooperation of all the partners, was it possible to plan and implement the scientifically and logistically highly complex missions at very short notice. 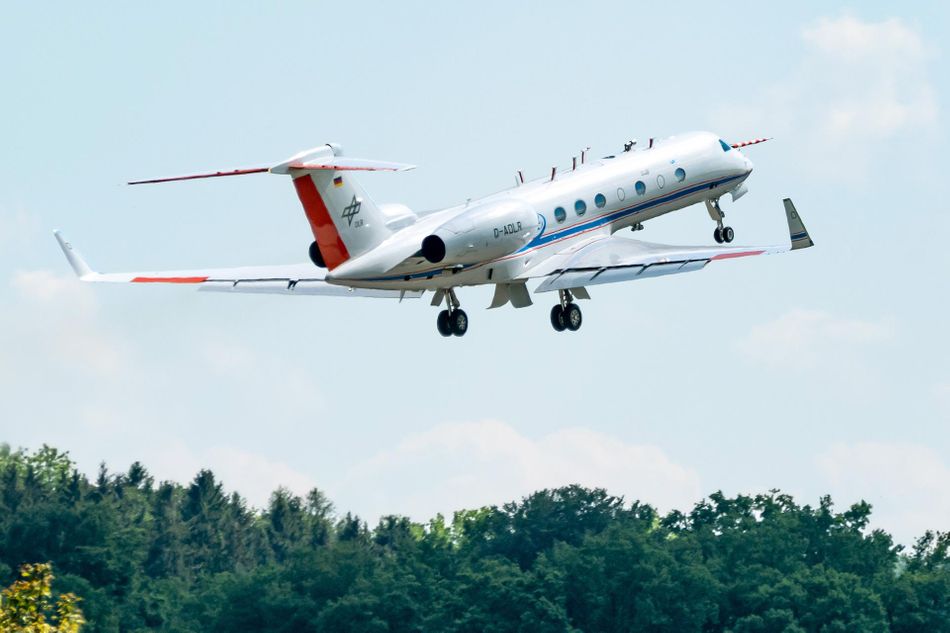 HALO takes off on the BLUESKY mission, Credit: DLR (CC-BY 3.0)

Voigt and her colleagues believe that the BLUESKY data will provide a clearer picture of anthropogenic influences on the composition of Earth's atmosphere. With the equipment on board both research aircraft, the BLUESKY scientists are investigating aircraft emissions such as nitrogen oxides, sulphur dioxide and aerosols at cruising altitude, in addition to the few remaining contrails. Among other things, they want to find out how much these emissions have decreased over Europe and the North Atlantic flight corridor. Approximately 30,000 aircraft fly over Europe every day, with correspondingly significant emissions. The reduced air traffic will allow more flexible flight routes for the measurements.

In addition, the researchers want to investigate the reduced emission plumes from urban areas and clarify how emissions are distributed at the atmospheric boundary layer. For example, the BLUESKY scientists plan to fly over the Ruhr area and the regions around Frankfurt am Main, Berlin and Munich. Flights over the Po Valley in Italy and around Paris and London are also planned. "Close to cities and conurbations, we will approach the atmospheric boundary layer at an altitude of one to two kilometres, since emissions from road traffic and industry are concentrated there," explains Jos Lelieveld. "We are interested in how much the concentrations of sulphur dioxide, nitrogen oxides, hydrocarbons and their chemical reaction products, as well as ozone and aerosols, have changed." He is also very proud that the team is the first in the world to implement a measurement campaign of this type. 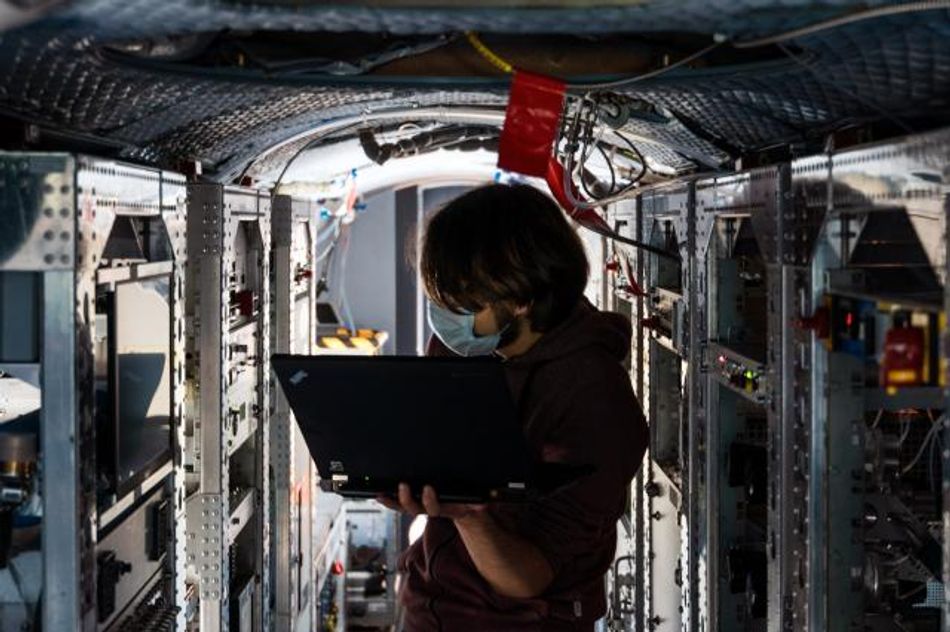 Measuring instruments in the research aircraft HALO
In recent weeks, it has been possible to install and adapt numerous instruments at short notice for the BLUESKY mission at the DLR Flight Operations facility in Oberpfaffenhofen. All flights are carried out in accordance with the currently valid rules of conduct and hygiene: during preparation, realisation and post-flight operations. Credit: © DLR. All rights reserved

In recent weeks, two DLR research aircraft – the Falcon 20E and the Gulfstream G550 HALO – have been successfully converted at short notice for the BLUESKY missions. The conversions were carried out at the DLR Flight Operations Facility in Oberpfaffenhofen. "Numerous instruments have had to be installed and adapted, and the aircraft modified for the upcoming missions," says Burkard Wigger, Head of DLR Flight Experiments. "Close cooperation between the various scientific organisations has made it possible for these two research aircraft to operate simultaneously under the challenging conditions resulting from the Coronavirus pandemic."

The preparation, execution and follow-up of the flights is being carried out in accordance with the current rules regarding personal interactions and infection control. Joint flights by Falcon and HALO are planned until the first half of June. The evaluation of the data and the analysis of the results will then take several months. The analysis will include comparative data from previous HALO research flight campaigns on air traffic emissions and emissions from major cities and conurbations.

The High Altitude and Long Range (HALO) research aircraft is a joint initiative of German environmental and climate research institutions. HALO is supported by grants from the Federal Ministry of Education and Research (BMBF), the German Research Foundation (DFG), the Helmholtz Association of German Research Centres, the Max Planck Society (MPG), the Leibniz Association, the Free State of Bavaria, the Karlsruhe Institute of Technology (KIT), the Forschungszentrum Jülich and the German Aerospace Center (DLR).

In 2010, DLR reacted at short notice to an unusual situation in the atmosphere with the measurement flights of the Falcon as the 'Volcano Ash Hunter'. The Falcon became known worldwide in spring 2010, when, following the eruption of the Icelandic volcano 'Eyjafjallajökull', it provided important data for assessing the situation for the resumption of European air traffic with measurement flights through the ash cloud.

A collaboration between DTU and Danish OxyGuard, a world-leading supplier of fish farm equipment, will develop a new sensor that can monitor the water quality at fish farms and ensure the welfare of the fish.