The small sensor connects to an embeddable wireless transmitter that lies on top of the skull. Photo courtesy of John A. Rogers

A new class of small, thin electronic sensors can monitor temperature and pressure within the skull – crucial health parameters after a brain injury or surgery – then melt away when they are no longer needed, eliminating the need for additional surgery to remove the monitors and reducing the risk of infection and hemorrhage.

Similar sensors can be adapted for postoperative monitoring in other body systems as well, the researchers say. Led by John A. Rogers, a professor of materials science and engineering at the University of Illinois at Urbana-Champaign, and Wilson Ray, a professor of neurological surgery at the Washington University School of Medicine in St. Louis, the researchers published their work in the journal Nature. 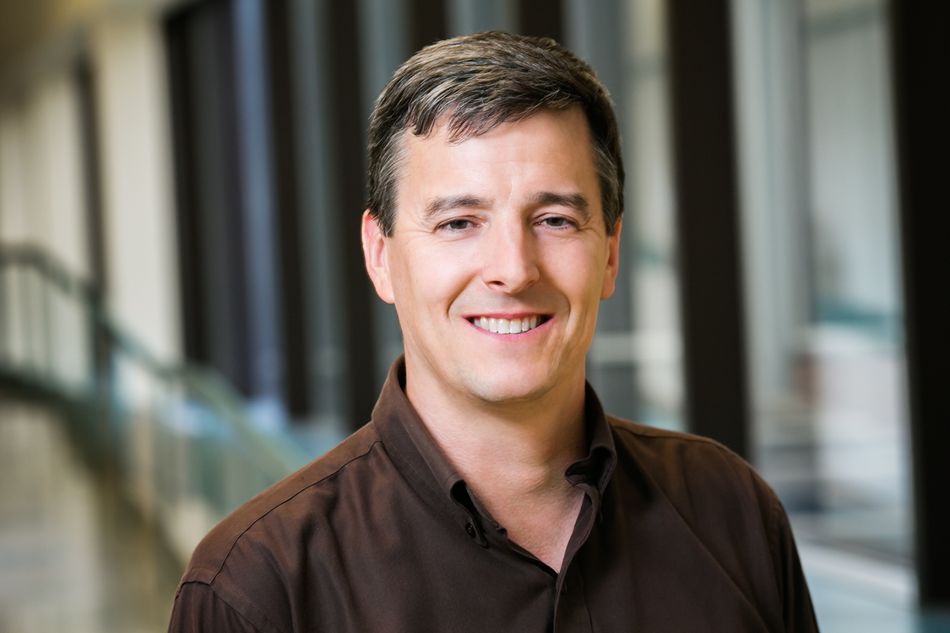 Illinois professor John A. Rogers led a group that developed tiny implantable sensors for monitoring pressure and temperature inside the skull after a brain injury. Photo by L. Brian Stauffer

“This is a new class of electronic biomedical implants,” said Rogers, who directs the Frederick Seitz Materials Research Laboratory at Illinois. “These kinds of systems have potential across a range of clinical practices, where therapeutic or monitoring devices are implanted or ingested, perform a sophisticated function, and then resorb harmlessly into the body after their function is no longer necessary.”

After a traumatic brain injury or brain surgery, it is crucial to monitor the patient for swelling and pressure on the brain. Current monitoring technology is bulky and invasive, Rogers said, and the wires restrict the patent’s movement and hamper physical therapy as they recover. Because they require continuous, hard-wired access into the head, such implants also carry the risk of allergic reactions, infection and hemorrhage, and even could exacerbate the inflammation they are meant to monitor.

“If you simply could throw out all the conventional hardware and replace it with very tiny, fully implantable sensors capable of the same function, constructed out of bioresorbable materials in a way that also eliminates or greatly miniaturizes the wires, then you could remove a lot of the risk and achieve better patient outcomes,” Rogers said. ”We were able to demonstrate all of these key features in animal models, with a measurement precision that’s just as good as that of conventional devices.”

The new devices incorporate dissolvable silicon technology developed by Rogers’ group at the U. of I. The sensors, smaller than a grain of rice, are built on extremely thin sheets of silicon – which are naturally biodegradable – that are configured to function normally for a few weeks, then dissolve away, completely and harmlessly, in the body’s own fluids.

Rogers’ group teamed with Illinois materials science and engineering professor Paul V. Braun to make the silicon platforms sensitive to clinically relevant pressure levels in the intracranial fluid surrounding the brain. They also added a tiny temperature sensor and connected it to a wireless transmitter roughly the size of a postage stamp, implanted under the skin but on top of the skull.

A downloadable image gallery is available.

The Illinois group worked with clinical experts in traumatic brain injury at Washington University to implant the sensors in rats, testing for performance and biocompatibility. They found that the temperature and pressure readings from the dissolvable sensors matched conventional monitoring devices for accuracy. 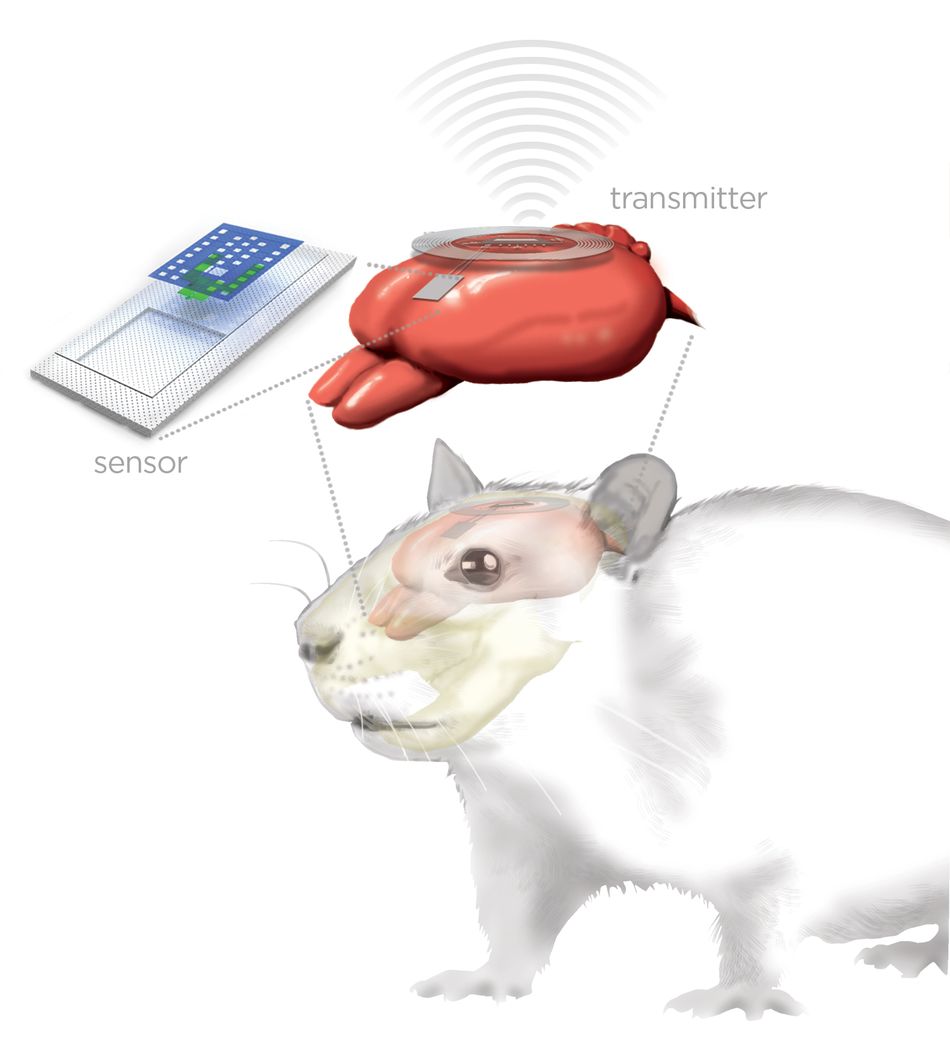 An artist’s rendering of the brain sensor and wireless transmitter monitoring a rat’s brain. Image by Julie McMahon

“The ultimate strategy is to have a device that you can place in the brain – or in other organs in the body – that is entirely implanted, intimately connected with the organ you want to monitor and can transmit signals wirelessly to provide information on the health of that organ, allowing doctors to intervene if necessary to prevent bigger problems,” said Rory Murphy, a neurosurgeon at Washington University and co-author of the paper. “After the critical period that you actually want to monitor, it will dissolve away and disappear.”

The researchers are moving toward human trials for this technology, as well as extending its functionality for other biomedical applications.

“We have established a range of device variations, materials and measurement capabilities for sensing in other clinical contexts,” Rogers said. “In the near future, we believe that it will be possible to embed therapeutic function, such as electrical stimulation or drug delivery, into the same systems while retaining the essential bioresorbable character.”

Memory, Neuralink, and Immortality of Consciousness

Is there a way to preserve the fleeting, fragile stuff that makes us who we are?