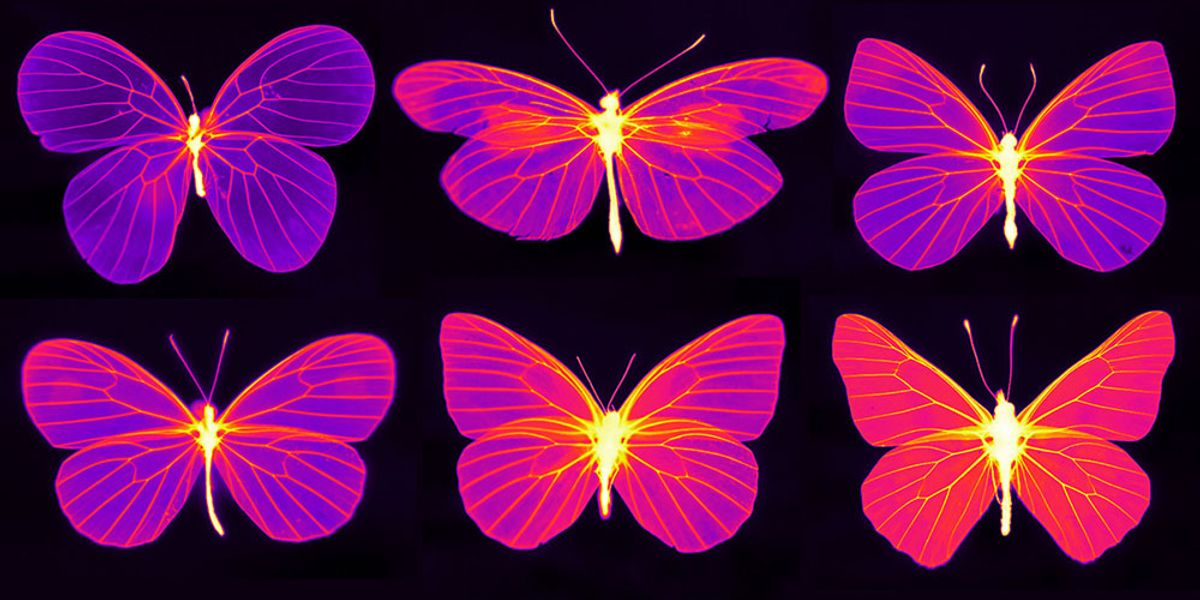 It turns out that butterflies are just as striking in thermal as they are in the visible light spectrum.

It turns out that butterflies are just as striking in thermal as they are in the visible light spectrum. Recently, researchers from Columbia Engineering and Harvard University published a study in Nature examining the thermodynamic properties of butterfly wings and the importance of radiative cooling in keeping these delicate structures fluttering. Nanfang Yu, associate professor of applied physics at Columbia, describes how thermal imaging played an important role in the study.

“It’s the most non-invasive way to measure temperature,” Yu explains. In the study, the team identified the complex living structures in butterfly wings that expertly aid in thermoregulation. With a thermal camera, in this case a FLIR SC660 science camera, “you begin to essentially see the skeleton of the butterfly,” says Yu. “It’s almost like an x-ray—you are seeing the framework, the wing veins, the membrane… the whole cross section of the wing material.” In thermal, the bright colors and patterns of a butterfly wing all disappear, and what you see instead is the underlying structure of the wing itself. 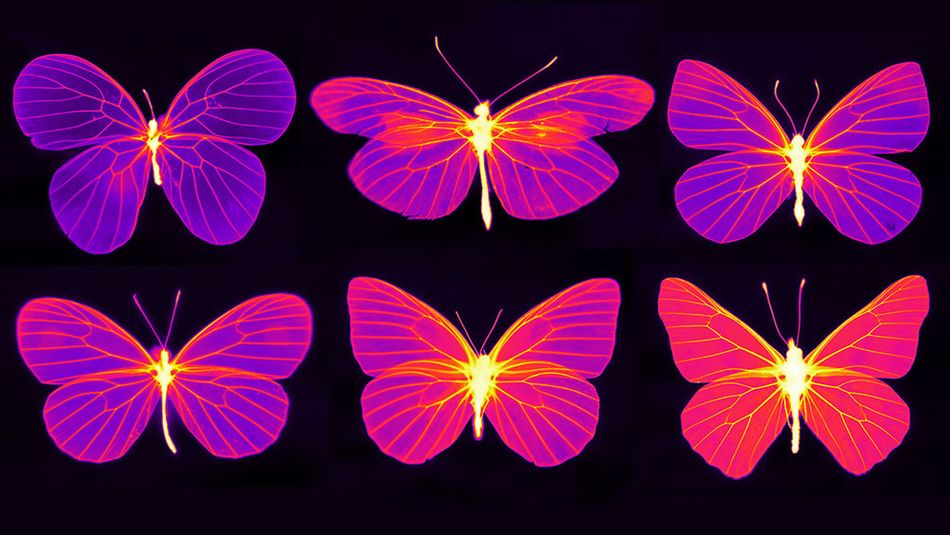 Past studies of butterfly wings have been limited by using equipment like thermocouples to measure temperature. Even the smallest probes are large compared to the thickness of a butterfly wing, and the act of measuring can affect the local temperature. Additional inaccuracies may occur because the measurements are only point-by-point. With thermal, “you can measure and map the entire temperature distribution,” Yu says. His team has been able to view and measure the difference in temperature between the wing veins, membrane, and other structures like scent pads. They found that the areas of butterfly wings that contain live cells (wing veins) have higher thermal emissivity than the “lifeless” regions of the wing (the membrane). 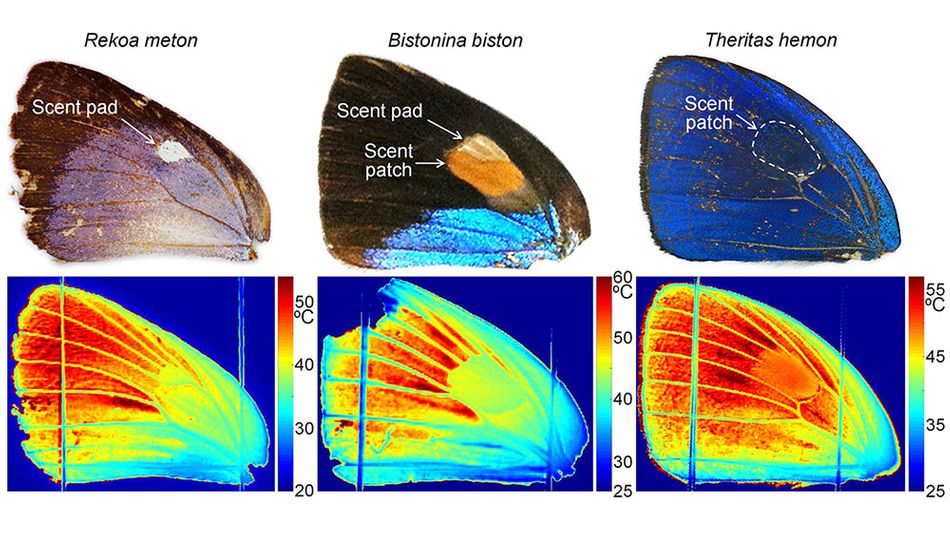 “This imaging technique enables us to examine physical adaptations that decouple the wing’s visible appearance from its thermodynamic properties,” Yu says in an article from Columbia Engineering. “We discovered that diverse scale nanostructures and non-uniform cuticle thicknesses create a heterogeneous distribution of radiative cooling—heat dissipation through thermal radiation—that selectively reduces the temperature of living structures such as wing veins and scent pads.”

Very thin materials like a plastic bag or a butterfly wing may be transparent in the infrared spectrum. To get a true temperature reading of a butterfly wing, Yu’s team had to quantify the emissivity and reflectivity of the wing and remove those sources of background temperature from their measurements.

In addition to mapping out the thermal distribution of butterfly wings, the researchers also conducted behavioral studies that they observed in thermal. Using a small light as a heat source, they demonstrated that butterflies use their wings to sense the direction and intensity of sunlight. At the “trigger” temperature of approximately 40°C, all the species they studied turned within a few seconds to avoid the light and keep their wings from overheating.

Butterfly wings have mechanical sensors that detect the direction and intensity of light. Here, the butterfly quickly moves to prevent its wing from overheating. Image credit: Nanfang Yu and Cheng-Chia Tsai

This isn’t Yu’s first time using a thermal camera to study insects. “When I was joining Columbia in 2013, the FLIR camera was one of the first pieces of equipment I bought while I was setting up my lab,” Yu says. Though his research is mainly focused on nanophotonics, Yu is particularly interested in the intersection between biology, photonics, and physics. His research friends in the field of biology “often they probe me with questions regarding the life history of animals they are studying... I'm quite interested in helping them solve these mysteries from a physics and photonics point of view.”

In an earlier collaboration with a nanobiologist colleague, Yu studied Saharan silver ants, which forage during the heat of the day in one of the hottest terrestrial environments on earth. In this study, published in Science in 2015, the researchers also used a FLIR scientific camera to monitor the body temperatures of the ants. They wondered how such small insects could survive such harsh conditions. “The interesting thing here is understanding how small and light insects—tiny ants or the thin wings of butterflies—manage thermodynamically, because they are, by default, very bad at it,” Yu explains. Due to their small thermal capacity, small animals like insects can heat up to extreme temperatures within a few seconds. 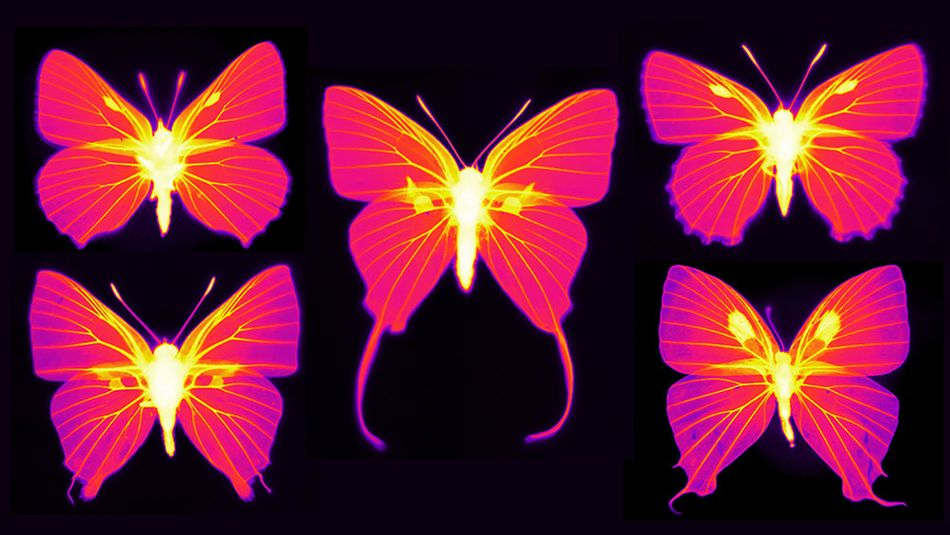 Infrared imaging of butterflies from the family Lycaenidae. The intensity of the picture is proportional to thermal emissivity—the capability of dissipating heat via thermal radiation. The image shows that living parts of the wings have elevated thermal emissivity. Image credit: Nanfang Yu and Cheng-Chia Tsai

The silver ants deal with extreme heat using the very fine hairs that cover their bodies. These hairs serve two functions: backscattering light in the visible and infrared wavelength to reduce the amount of absorption from solar energy, and enhancing thermal emissivity, so when the body of the ant is heated it can better distribute the heat in the form of thermal radiation.

“We wanted to find out how small animals were hardwired to survive extreme heat,” Yu says. His latest study continues exploring the question of how small insects manage to keep cool. Butterfly wings are covered with mechanical sensors to detect overheating, and their wing scales contain nanostructures that help facilitate radiative cooling. Besides the biological interest of these findings, Yu thinks they could serve as inspiration for the design of heat-resistant nanostructures and heat-sensing aircraft. 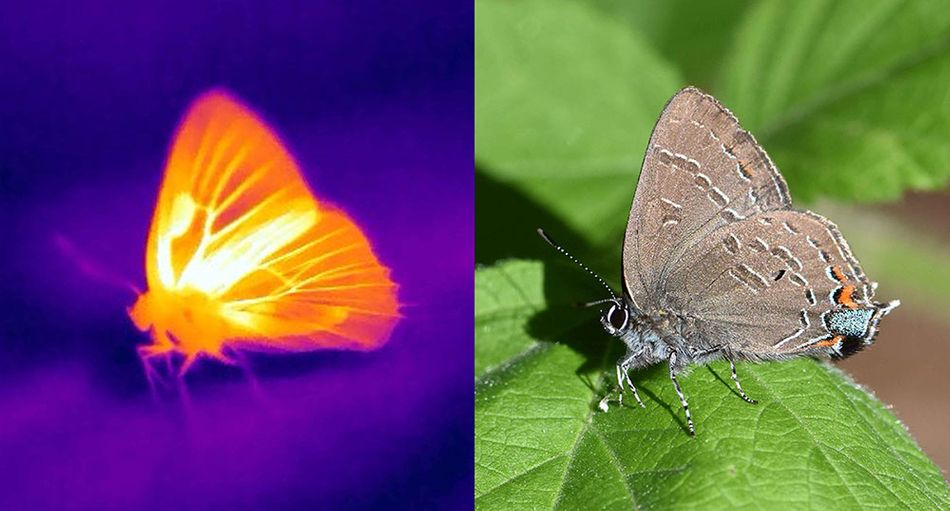 Thermal imaging helps reveal how butterflies like this hickory hairstreak keep from overheating. The membrane between the wing veins is actually hotter than the rest of the wing, but looks cooler because it’s semi-transparent and against a cool background. Image credit: Nanfang Yu and Cheng-Chia Tsai

Yu and his colleague Naomi E. Pierce, Hessel Professor of Biology, plan to continue their research on butterfly wings. Pierce is the Curator of Lepidoptera at the Museum of Comparative Zoology at Harvard, and has access to a large collection of butterflies and moths. They are currently conducting an extensive scan of the collection using a thermal camera, and hope to gain an understanding of the factors that contribute to the design of a butterfly wing. Yu compares the work to “deciphering a complex book” because of the many diverse elements that have played a part in the evolution of the butterfly wing. Clearly, this is one book that’s worth reading closely to see what other discoveries we might uncover.