Cheaper refrigerators? Stronger hip implants? A better understanding of human disease? All of these could be possible and more, someday, thanks to an ambitious new project underway at the National Institute of Standards and Technology (NIST).

NIST researchers are in the early stages of a massive undertaking to design and build a fleet of tiny ultra-sensitive thermometers. If they succeed, their system will be the first to make real-time measurements of temperature on the microscopic scale in an opaque 3D volume — which could include medical implants, refrigerators, and even the human body.

Measuring and controlling temperature in 3D is highly desirable for medical diagnostics, precision manufacturing, and much more. However, there is currently no way to measure 3D temperature inside these kinds of systems. NIST researchers are working on a solution using tiny nanoscale thermometers. Credit: Sean Kelley/NIST. Music: Blue Dot Sessions.

The NIST team has now finished building its customized laboratory spaces for this unique project and has begun the first major phase of the experiment.

Thermal MagIC will work by using nanometer-sized objects whose magnetic signals change with temperature. The objects would be incorporated into the liquids or solids being studied — the melted plastic that might be used as part of an artificial joint replacement, or the liquid coolant being recirculated through a refrigerator. A remote sensing system would then pick up these magnetic signals, meaning the system being studied would be free from wires or other bulky external objects.

The final product could make temperature measurements that are 10 times more precise than state-of-the-art techniques, acquired in one-tenth the time in a volume 10,000 times smaller. This equates to measurements accurate to within 25 millikelvin (thousandths of a kelvin) in as little as a tenth of a second, in a volume just a hundred micrometers (millionths of a meter) on a side. The measurements would be “traceable” to the International System of Units (SI); in other words, its readings could be accurately related to the fundamental definition of the kelvin, the world’s basic unit of temperature. 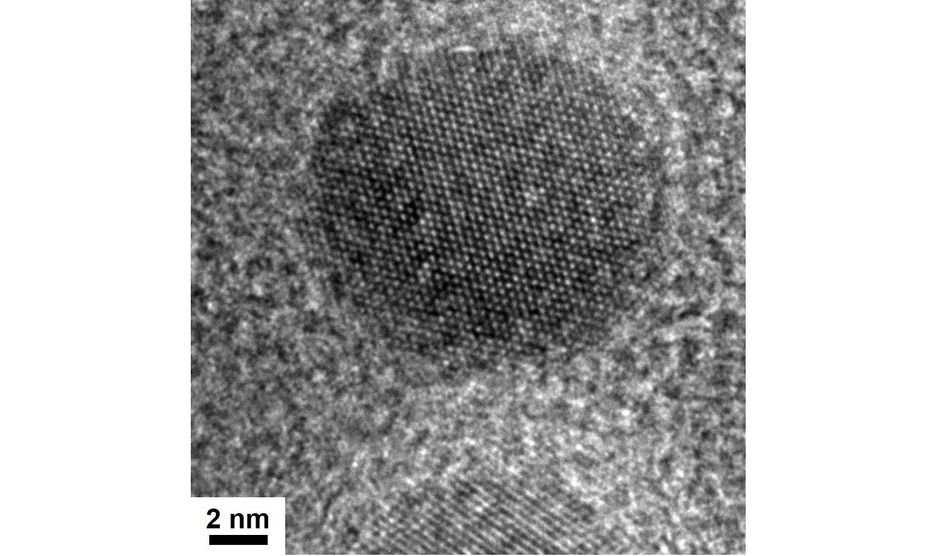 Image of a prototype nanoparticle for thermometry. Made of iron oxide and cobalt, this object—just about eight nanometers in diameter—is a good candidate for a nanoparticle “core,” which would be encased in a shell of a different material. Credit: Adam Biacchi/NIST

The system aims to measure temperatures over the range from 200 to 400 kelvin (K), which is about -99 to 260 degrees Fahrenheit (F). This would cover most potential applications — at least the ones the Thermal MagIC team envisions will be possible within the next 5 years. Dennis and her colleagues see potential for a much larger temperature range, stretching from 4 K-600 K, which would encompass everything from supercooled superconductors to molten lead. But that is not a part of current development plans.

“This is a big enough sea change that we expect that if we can develop it — and we have confidence that we can — other people will take it and really run with it and do things that we currently can’t imagine,” Dennis said.

Potential applications are mostly in research and development, but Dennis said the increase in knowledge would likely trickle down to a variety of products, possibly including 3D printers, refrigerators, and medicines.

What Is It Good For?

Whether it’s the thermostat in your living room or a high-precision standard instrument that scientists use for laboratory measurements, most thermometers used today can only measure relatively big areas — on a macroscopic as opposed to microscopic level. These conventional thermometers are also intrusive, requiring sensors to penetrate the system being measured and to connect to a readout system by bulky wires.

Infrared thermometers, such as the forehead instruments used at many doctors’ offices, are less intrusive. But they still only make macroscopic measurements and cannot see beneath surfaces.

Thermal MagIC should let scientists get around both these limitations, Dennis said.

Engineers could use Thermal MagIC to study, for the first time, how heat transfer occurs within different coolants on the microscale, which could aid their quest to find cheaper, less energy-intensive refrigeration systems.

Doctors could use Thermal MagIC to study diseases, many of which are associated with temperature increases — a hallmark of inflammation — in specific parts of the body.

And manufacturers could use the system to better control 3D printing machines that melt plastic to build custom objects such as medical implants and prostheses. Without the ability to measure temperature on the microscale, 3D printing developers are missing crucial information about what’s going on inside the plastic as it solidifies into an object. More knowledge could improve the strength and quality of 3D-printed materials someday, by giving engineers more control over the 3D printing process. 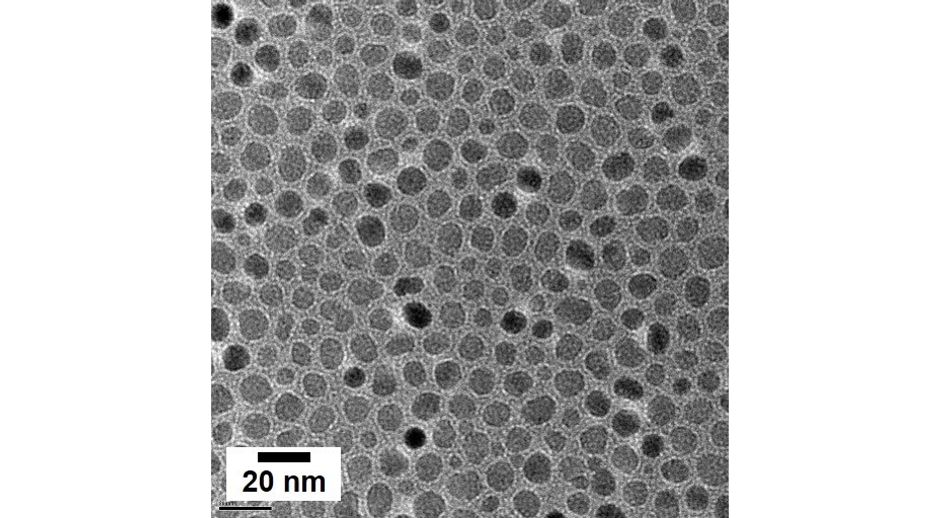 A group of prototype nanoparticle cores made of iron oxide and cobalt. Each particle is only 9.5 nm in diameter. Credit: Adam Biacchi/NIST

The first step in making this new thermometry system is creating nano-sized magnets that will give off strong magnetic signals in response to temperature changes. To keep particle concentrations as low as possible, the magnets will need to be 10 times more sensitive to temperature changes than any objects that currently exist.

To get that kind of signal, Dennis said, researchers will likely need to use multiple magnetic materials in each nano-object. A core of one substance will be surrounded by other materials like the layers of an onion.

The trouble is that there are practically endless combinations of properties that can be tweaked, including the materials’ composition, size, shape, the number and thickness of the layers, or even the number of materials. Going through all of these potential combinations and testing each one for its effect on the object’s temperature sensitivity could take multiple lifetimes to accomplish.

To help them get there in months instead of decades, the team is turning to sophisticated software: the Object Oriented MicroMagnetic Framework (OOMMF), a widely used modeling program developed by NIST researchers Mike Donahue and Don Porter.

The Thermal MagIC team will use this program to create a feedback loop. NIST scientists Thomas Moffat, Angela Hight Walker and Adam Biacchi will synthesize new nano-objects. Then Dennis and her team will characterize the objects’ properties. And finally, Donahue will help them feed that information into OOMMF, which will make predictions about what combinations of materials they should try next.

“We have some very promising results from the magnetic nano-objects side of things, but we’re not quite there yet,” Dennis said. 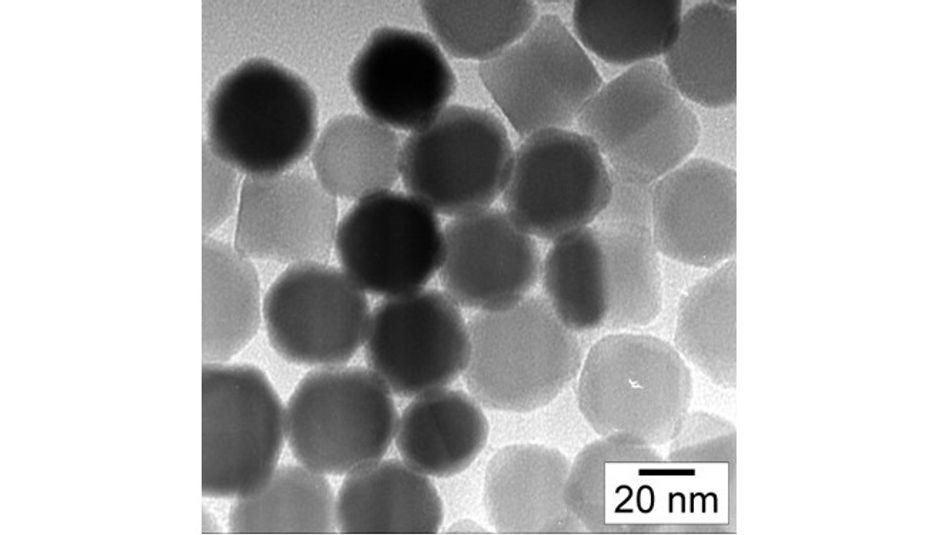 A slightly larger prototype for the nanoparticle cores. These particles are 35 nm in diameter. Credit: Adam Biacchi/NIST

Each Dog Is a Voxel

So how do they measure the signals given out by tiny concentrations of nano-thermometers inside a 3D object in response to temperature changes? They do it with a machine called a magnetic particle imager (MPI), which surrounds the sample and measures a magnetic signal coming off the nanoparticles.

Effectively, they measure changes to the magnetic signal coming off one small volume of the sample, called a “voxel” — basically a 3D pixel — and then scan through the entire sample one voxel at a time.

But it’s hard to focus a magnetic field, said NIST physicist Solomon Woods. So they achieve their goal in reverse.

Consider a metaphor. Say you have a dog kennel, and you want to measure how loud each individual dog is barking. But you only have one microphone. If multiple dogs are barking at once, your mic will pick up all of that sound, but with only one mic you won’t be able to distinguish one dog’s bark from another’s.

However, if you could quiet each dog somehow — perhaps by occupying its mouth with a bone — except for a single cocker spaniel in the corner, then your mic would still be picking up all the sounds in the room, but the only sound would be from the cocker spaniel.

In theory, you could do this with each dog in sequence — first the cocker spaniel, then the mastiff next to it, then the labradoodle next in line — each time leaving just one dog bone-free.

In this metaphor, each dog is a voxel.

Basically, the researchers max out the ability of all but one small volume of their sample to respond to a magnetic field. (This is the equivalent of stuffing each dog’s mouth with a delicious bone.) Then, measuring the change in magnetic signal from the entire sample effectively lets you measure just that one little section.

MPI systems similar to this exist but are not sensitive enough to measure the kind of tiny magnetic signal that would come from a small change in temperature. The challenge for the NIST team is to boost the signal significantly.

“Our instrumentation is very similar to MPI, but since we have to measure temperature, not just measure the presence of a nano-object, we essentially need to boost our signal-to-noise ratio over MPI by a thousand or 10,000 times,” Woods said.

They plan to boost the signal using state-of-the-art technologies. For example, Woods may use superconducting quantum interference devices (SQUIDs), cryogenic sensors that measure extremely subtle changes in magnetic fields, or atomic magnetometers, which detect how energy levels of atoms are changed by an external magnetic field. Woods is working on which are best to use and how to integrate them into the detection system.

The final part of the project is making sure the measurements are traceable to the SI, a project led by NIST physicist Wes Tew. That will involve measuring the nano-thermometers’ magnetic signals at different temperatures that are simultaneously being measured by standard instruments.

Before finishing their new laboratory space, the researchers were able to complete some important work. In a paper published last month in the International Journal on Magnetic Particle Imaging, the group reported that they had found and tested a “promising” nanoparticle material made of iron and cobalt, with temperature sensitivities that varied in a controllable way depending on how the team prepared the material. Adding an appropriate shell material to encase this nanoparticle “core” would bring the team closer to creating a working temperature-sensitive nanoparticle for Thermal MagIC.

In the past few weeks, the researchers have made further progress testing combinations of materials for the nanoparticles.

“Despite the challenge of working during the pandemic, we have had some successes in our new labs,” Woods said. “These achievements include our first syntheses of multi-layer nanomagnetic systems for thermometry, and ultra-stable magnetic temperature measurements using techniques borrowed from atomic clock research.”