Another fascinating month for robotics. Researchers are the highlight of the month. Through their work, we are pushing the boundaries of self-awareness, complex structure and even the limits of life and death.

Take a seat and join us in this quick review of robotics news.

And don't forget that you can also share your story. We would love to feature it in our next blog. Just email us at robotics.community@canonical.com

The Enabot Ebo Air is a friendly smart home robot, designed to keep the family company. It allows you to interact with your family at home while you’re away. It can take photos and videos as well as recognise faces, and you can steer it around the house via Wi-Fi. Recently, the security assessment firm Modux was asked to evaluate the security of the robot, and found two important vulnerabilities. Modux disclosed the issues to the manufacturer, who has since addressed the risks and released a fix. The first issue found was the use of a shared password for the system administrator (root) account. The Enabot Ebo Air robot came pre-configured with a default system administrator password, which was weak and shared across all devices. An attacker could have used this to connect via SSH (secure shell), and gain full administrative permissions. The recommendation was to disable SSH functionality, which the manufacturer did.

The second bug was a missing secure-delete functionality, which could potentially disclose information from the previous owner if the robot was resold. The robot did not effectively perform a secure deletion of data when a factory reset was initiated, leaving behind artefacts from previous uses of the device, including cleartext Wi-Fi passwords and session tokens from the previous owner. For this, the recommendation was to use a secure deletion functionality instead, overwriting all sensitive data multiple times.

An attacker could have used these vulnerabilities to move the robot, access the camera, record video, speak through the microphone, among other tasks, effectively using it as a surveillance device. This event highlights the importance of security awareness and thorough testing, as robots continue to serve and accompany us more and more in our daily lives.

Every time Amazon launches or acquires a new company (especially one developing a device) the whole internet starts talking about the data and privacy implications. Yes, certainly data is important for Amazon. But that is not the whole story. Today I want to talk about the impact this acquisition has on investors and how this could boost the market. Funding a robotics venture is not easy. Between March 2020 and March 2021, robotics companies raised only 8% in capital compared to AI companies. AI-focused startups raised a total of $73.4 billion while robotics startups raised $6.3 billion. This is a paltry sum in comparison, especially when we saw an increasing need for robotics in several industries (due to COVID). There are many reasons behind this. One of those, and the most important one, is the increased risk perception from investors. Robotics development is expensive and takes time.

But moves like Amazon’s show something to investors: a profitable exit. Amazon will acquire iRobot for $61 per share in an all-cash transaction valued at approximately $1.7 billion. A success story is always needed to push investment, and this certainly makes one.

This is not an isolated event. It comes after 2 years of really interesting acquisitions. Take Zebra's acquisition of Fetch, or John Deere's acquisitions of ROS-based startups. Investors are aware, now more than ever, that while the risk is high, the profit/ROI could be as well. Moves like Amazon launching Astro create more incentives.

Amazon’s acquisition has various implications. Only time will tell whether this boosts the market, and how much.

Robots are now able to learn a model of their entire body from scratch, without any human assistance. Researchers from Columbia University developed a visual self-model using deep neural networks that allowed a robot to learn the relationship between its motor actions and the volume it occupied in its environment. The team found a way to visualise how the robot saw itself, finding a surprisingly accurate self-image. (source)

The researchers placed a robotic arm inside a circle of five streaming video cameras. The video footage was fed to the network as the robot wiggled and contorted. This allowed it to learn exactly how its body moved in response to various motor commands.

After about three hours, the robot learned the relationship between its motor actions and the volume it occupied in its environment. Much like an infant exploring itself for the first time in a hall of mirrors. Robot inside a circle of five streaming video cameras

This awareness allows the robot to plan motion, reach goals, and avoid obstacles in a variety of situations—another small but incredible step towards robots’ self-awareness.

Researchers at the University of New South Wales are also working on a special project. They developed a new class of smart textiles that can shape-shift and turn two-dimensional material into 3D structures. The material is constructed from tiny soft artificial muscles. These muscles are long silicone tubes that can change shape thanks to hydraulics. The UNSW team's smart textile enables fabric reconfiguration which produces shape-morphing structures such as this butterfly and flower that can move using hydraulics. (source)

The artificial muscles can be programmed to contract or expand into a variety of shapes depending on their initial structure. The smart textile can either be attached to existing passive material or yarn to create an active fabric. What’s next is not fabric, but something from a sci-fi movie. Rice University researchers found a way to use dead spiders as robotic grippers. What started with a dead spider in a lab became a gripper; Necrobotics. Functioning of the spider gripper (source)

If you haven't noticed yet, spiders’ legs curl up when they die. This is because spiders extend their legs with hydraulic pressure and when spiders die they lose this ability. Researchers tapped into the hydraulic infrastructure of dead spiders using a needle, and by pumping air, they extended the spider’s legs. Releasing the pressure retracted the legs, allowing them to grab objects.

Congratulations to ROS Industrial for its 10-year anniversary

Happy birthday ROS Industrial! If you don't know it yet, ROS Industrial is an open source project that seeks to extend ROS and now ROS 2 to industrial hardware and applications.

ROS Industrial identifies and prioritises capabilities for industrial robotics and automation to address current and future application problems. They also provide a wide range of user services, including technical support and training, to facilitate the continued adoption of ROS by the industry.

They help us all carry the flag of open source in the industrial and automation domain. For that, we are truly thankful and we’re proud to be part of this community.

Did you miss the interview with Akara Robotics CEO Conor McGinn? Don’t worry, the video is now available on youtube.

And don't miss our upcoming interview with Russell Nickerson, Engagement Liaison at MassRobotics. MassRobotics is a non-profit coworking space for robotics startups in Boston's Seaport, where Russell supports more than 60 residence startups.

Based on his experience scaling robotics companies, Russell will share the dos and don'ts of go-to-market strategy. 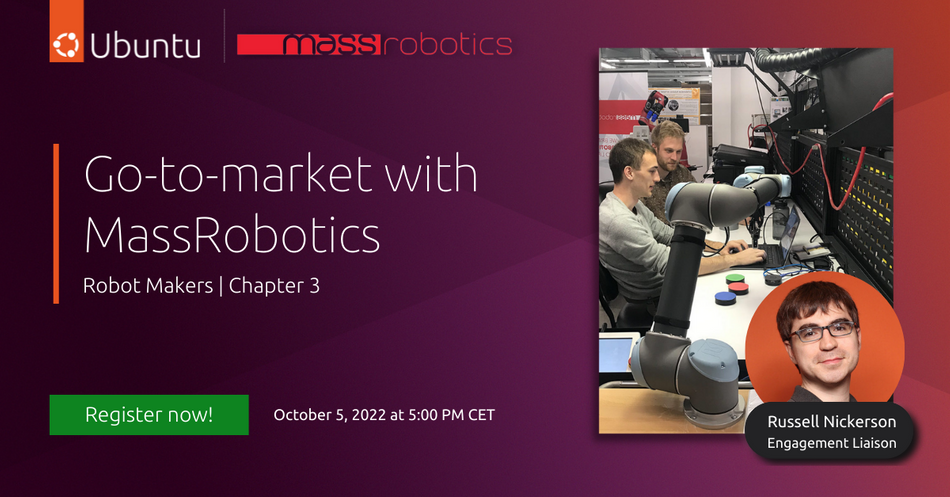 We recently published a whitepaper about the importance of choosing the right OS for your robot. Picking the right OS could make a big difference in factors like security, maintenance and infrastructure for deployment. If you want us to feature your robotics application, just send us an email at robotics.community@canonical.com.

After receiving questions regarding an error message issued by ROS 2 applications in snaps, we decided to put together a blog post on this matter “How to use ROS 2 shared memory in snaps” As usual, we’d love to get your feedback. Feel free to reach out on the snapcraft forum.

As always, we would love to hear from you. Send a summary of your robotics innovation and project to robotics.community@canonical.com, and we will share it in our next robotics newsletter or monthly video. Thanks for reading!

Canonical is the publisher of Ubuntu, the OS for most public cloud workloads and the emerging categories of smart gateways, self-driving cars and advanced robots. Canonical partners with industry leaders to deliver enterprise-grade security, long-term maintenance and support on all major architect... learn more