The Rise of Robots in Defence

The rise of robots in defence is a cause for celebration for those in the industry, as well as for ethical concern in others. Advanced robotics projects have been making the headlines, and anyone who's seen the French/English TV version of The War of the Worlds will find the French military's trial robot dog terrifyingly familiar.

Robot manufacturers claim that such robots will never be armed, and will be used only to support and augment human activities rather than as automated aggressors, although this is a fine line that may easily be breached. There are, however, cogent and convincing reasons for deploying robots in defence, particularly regarding the safety and protection of human combatants.

Why Use Robots In The Defence Industry?

In the first instance, it's cheaper and safer to put robots into the field than human beings. They don't require food or water, protective clothing, sleep, or stress relief, so they almost entirely do away with the need for a quartermaster and resupply chain. After the initial outlay involved in designing and building robots, this will greatly reduce the costs of provisioning an operation. Unmanned vehicles are also often safer for humans than those which require a driver or crew, and can save hugely on operational expenses. For example, the US defence agency's autonomous tracking vessel, Sea Hunter, is estimated to save some $680,000 per day in running costs, as against the expense of a crewed navy destroyer performing the same task.

Robots & unmanned ground vehicles (UGVs) are generally far more robust and resilient than a human being. They are able to venture into hazardous environments such as fires, mines, underwater operations and other environments that are simply not possible for humans, including space. Humanoid robots have already been into space, and it's a logical, if frightening, step to send them next onto a battlefield. Once a robot has been equipped to handle tools, it can equally well handle weapons. However, most of these devices are intended for humanitarian purposes or disaster relief operations, such as defusing or exploding land mines, rescuing human beings in burning or collapsing buildings, or conveying supplies into a combat zone.

The major advantage of deploying robotic and autonomous systems, according to one military strategist, is to increase the effectiveness of human troops. Their capacities are expanded by robots to cover a larger area, and see more detail from a wider perspective using drone technology. The increased level of information provides a better understanding of a tactical or combat situation. Robotic devices are typically a lot more compact than the average human, and can be a lot less conspicuous, so surveillance capabilities are both expanded and more discreet.

They're also operationally more flexible and capable of higher functions, not to mention intelligent multi-tasking, so they offer a higher level of security in many fields. As well as surveillance and reconnaissance, autonomous devices can provide greater situational awareness in a fraction of the time it would take a human being to coordinate several sources of information. Drone patrols and sensors are already in use in many countries to provide 'non-threatening' security, although these functions are considered by some to be intrusive. Concern has been expressed, particularly in the US and China, that the police forces are becoming too militarised, and an unwarranted means of controlling the populace.

In the UK, the government has combined its defence research and innovation with procurement, and has set up an Expeditionary Robotics Centre of Expertise (ERCoE) to work with the British Army. The Centre will collect experts from many fields, including government, defence, academia and industry, to collaborate on projects that develop robots and autonomous systems. Through the agency of the MoD, this group will establish a direct line from drawing board to market, making sure that the process of developing innovative ideas into viable products can be greatly speeded up.

The ability to use the new technology will also be enhanced. Collaboration between designers, manufacturers and military end-users will enable a faster and more in-depth understanding of the products and how they are to be used. Expertise in robotics and autonomous systems will spread more quickly in an open and collaborative environment, speeding up training procedures and allowing personnel to train on the products throughout the design and production process.

How Are Robots Used In The Defence Industry?

There are already several operational use cases for robots and autonomous devices in the defence industry. These include reconnaissance, surveillance, ground support and bomb defusing, as well as naval uses and providing cover for combat troops.

The primary function of Spot, the robot dog being tested by the French military, is to reconnoitre, either alone or in company with humans. The yellow quadruped is equipped with cameras and WiFi connectivity, and it runs on rechargeable batteries. It can perform autonomous missions or be remotely controlled, and having four legs means it's able to navigate terrain that would be much more challenging for devices with treads or wheels.

As well as its defence potential, Spot has been used as a survey mechanism to access several hazardous environments, including factories and construction sites as well as underground mines. The main issue found with Spot by the French military test teams was that the batteries tended to run out very quickly and that it was slow compared to human beings, but these are faults that can be remedied.

Drones are a touchy subject, and many people regard them as an invasion of privacy and counter to human rights. Nonetheless, in 2019 the MoD commissioned a "swarm of drones" from a commercial developer, to provide the army with greater situational awareness. Unmanned aerial vehicles (UAVs), as they are officially known, offer cheaper and safer aerial surveillance and reconnaissance than any form of crewed vehicle. They make a lot less noise and often perform the additional function of disorienting or flushing out hidden enemies. Drones carrying out reconnaissance can be very small and discreet, so land can be scouted and troop positions recorded with less notice or danger than when using human personnel. 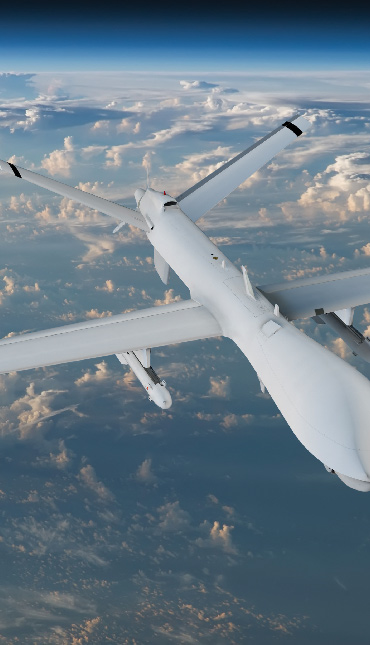 One of the greatest logistical problems of an army in the field is its ground support infrastructure; the organising of supply and distribution of food, water, clothing, medical supplies and munitions. Using a UGV or AEV, these can be conveyed to front line troops without any personnel having to risk navigating a combat zone. UGVs can travel over difficult terrain, use pre-programmed routes and be monitored at all times by a central controller.

Radio-controlled robots are familiar to us from TV and films, and are often regarded with some amusement. However, the role of autonomous devices in detecting and defusing bombs cannot be over-emphasised. Their field capabilities have been greatly improved, and Wifi connectivity gives them a greater performance range. In addition, some companies have developed sensors and devices that can be added to existing ground vehicles to convert them to unmanned operations, reducing the costs of IED detection.

The aforesaid Sea Hunter autonomous surface vessel is used to track enemy submarines, and can potentially cover thousands of miles of open sea for months on end, without requiring the presence of a single crew member. The Royal Navy has also been working with unmanned surface vessels (UMS), including the Madfox experimentation vessel and an RIB. These vessels can be used for hazardous expeditions such as detecting and deactivating mines, tracking enemy vessels, and anti-submarine warfare.

Another autonomous device being tried out by the French military was the Barakuda UGV, an all-terrain wheeled vehicle that looks like a cross between a tank and an armoured car. It's capable of various operational modes, including reconnaissance, with a 320° video turret; and medevac operations, with a stretcher facility and disinfection kit. This UGV's important feature is a ballistic shield, to offer protection for troops following in its wake.

There is a definite rise in the use of robots in the defence industry, and their potential is rapidly expanding. As a primary means of saving human lives, unmanned vehicles of all types are an advantage in the sea, in the air, or on the ground. While the initial cost of implementing these programmes may be very high, cost savings begin immediately after they go into service. Autonomous vehicles can cover a greater area, over difficult or demanding terrain, and undertake tasks no human could tackle.

While these machines are incredibly innovative and useful, there remains the concern in many minds that they may easily be weaponised, and that robot armies aren't so far in the future as once we thought. Like previous deadly inventions such as chemical and biological weapons, there must be some international code of ethics that governs the use of robots in defence, to ensure that they don't become robots of offence.

We formed Rowse in 2004, and have enjoyed many years of rewarding engagement with our customers. Our aim is always to supply quality products and a quality service, at the most competitive market prices. We currently work with clients in the domestic, industrial and military sectors, with a product ... learn more

Multifunctional shape-morphing material with reversible and rapid polymorphic reconfigurability implemented into a soft robotic morphing drone that autonomously transforms from ground to air vehicle and an underwater morphing machine.