Geothermal energy, which relies on hot rock far below the earth’s surface, has long been used as a source of heating and electricity generation. But recent advances in drilling technology have opened up new opportunities to widely deploy geothermal power. It spurred researchers at Princeton University to demonstrate in an article in the journal Applied Energy that geothermal also can serve as an ideal technology for energy storage. What’s more, geothermal can complement wind and solar energy, providing power when the sun is not shining or the wind dies down.

“Across the western United States where there’s a lot of geothermal potential, this could be the missing piece of the puzzle to get all the way to a carbon-free electricity system in conjunction with lots of wind and solar and shorter-duration batteries and demand flexibility,” said Jesse Jenkins, the project’s lead researcher and an assistant professor of Mechanical and Aerospace Engineering and the Andlinger Center for Energy and the Environment. 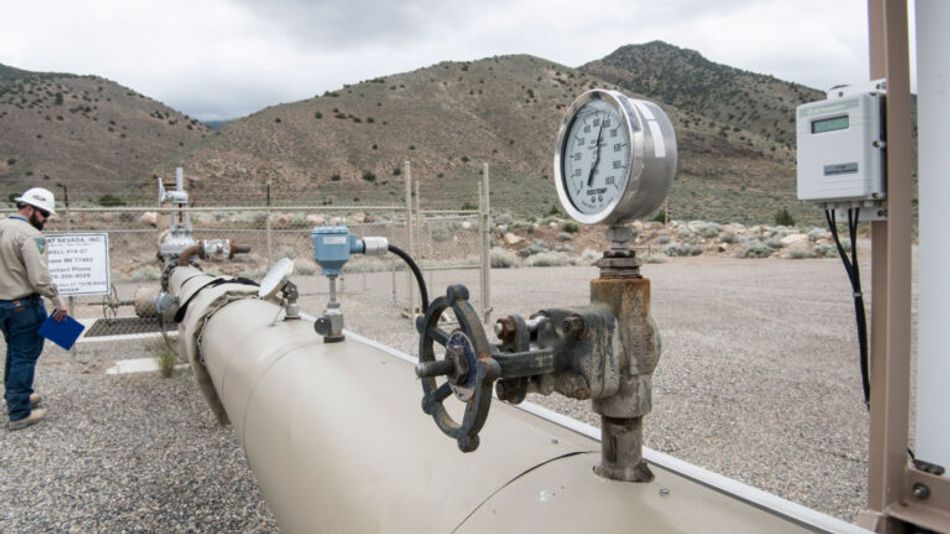 An injection well at the Blue Mountain geothermal plant. Photo by Dennis Schroeder/NREL

Geothermal is an ancient technology and has been used for heating for centuries. Boise, Idaho, heats much of downtown with geothermal. In modern times, geothermal has expanded to power industry, drive heat pumps and supply electric power to the grid. The renewable energy technology’s advantages include its constant generation, relatively low maintenance and zero carbon production.

But for grid-scale electricity, geothermal remains a niche player. That’s because the technology requires specific locations. Mainly, engineers need hot geological regions fairly close to the surface, fissured rock formations that serve as radiators, and access to fluid to move the heat to the surface. (Here is an overview of geothermal power.) That is changing rapidly as engineers are developing new technologies with an eye to vastly expanding geothermal electricity generation.

The key innovation harnesses technologies from the oil and gas sector, including directional drilling and hydraulic stimulation, to create artificial fracture systems wherever one can find hot, impermeable rock. If successful, companies commercializing these new techniques could unlock a clean, renewable resource capable of eventually supplying hundreds of gigawatts of power in the United States alone.

“That ability to move away from these very specific locations where you have all the right things in the right place, to just anywhere where you have hot enough rocks accessible without drilling too deep, means that enhanced geothermal can open up a much broader resource base,” Jenkins said.

It turns out, these novel techniques have another hidden advantage that has been overlooked until now. Water circulated through the artificial fracture system is contained within impermeable rocks, meaning it can’t leak out, and that makes these geothermal reservoirs a great a way to store large amounts of energy when demand is low and then release the energy when demand is high. Storing energy and shifting production to the most valuable times increases geothermal profitability and acts as a perfect complement for weather-dependent variable renewable systems such as wind and solar.

“We ran reservoir simulations to evaluate the systems that we are designing,” said Jack Norbeck, co-founder and CTO of Fervo Energy, a Houston-based development company pioneering these advanced geothermal technologies. The simulations showed that their geothermal systems could work to provide steady power, or baseload, but also to efficiently store and shift power for later use. “We can operate them both in baseload and flexible modes, which is a major step forward for geothermal technology.”

In 2020, engineers at Fervo were confident that their system would work. But they wanted to know about the economics of the systems and how to optimally integrate the technology into the power grid. For answers, Fervo approached Jenkins, head of Princeton’s ZERO Lab.

“That’s exactly the kind of questions that we love to look at,” Jenkins said. “These are practical questions that will guide real-world decision-making and investment and innovation, but have not been answered in the academic literature yet. So that’s the perfect project for us—something that is an open question in the research where the answer matters today, immediately, for the decisions that real people are making about how to allocate their time and money and innovation efforts.”

Norbeck, Fervo’s CTO, provided technical support for the study. He said the core of the idea was to combine the thermal energy of the subterranean rocks with mechanical energy of overlaying rock layers. Fervo’s engineers use horizontal drilling techniques to create a series of injection and production boreholes that are connected to each other by many small channels in the rock, forming an in-ground reservoir about 10,000 feet beneath the earth where water can be heated. Instead of immediately using heated water to drive turbines for electricity, technicians direct the hot, pressurized water into the reservoir’s network of channels. Fluid accumulates in the reservoir and flexes the rock, and that pressure can later be released to drive hot fluid to the surface to power turbines for electricity.

The researchers showed that this system can be used to store and dispatch electricity over a wide range durations, from just a few hours up to many days at a time – setting it apart from most other storage technologies. “The efficiency depends on the geology and other characteristics of the rock,” Norbeck said. But, in general, “it turns out this form of energy storage proves to be one of the cheapest forms of long-duration energy storage.”

Wilson Ricks, a Ph.D. candidate in mechanical and aerospace engineering and researcher with ZERO Lab, led the research and said the study’s results exceeded what he initially had expected.

“The idea seemed kind of simple and elegant to me: you have this system, it’s got these inherent properties and maybe we can just exploit them to do energy storage… almost like icing on a cake,” said Ricks, the paper’s lead author. “It turned out to be, unequivocally, more valuable in almost every context, and actually a really big potential advantage.”

The paper, The value of in-reservoir energy storage for flexible dispatch of geothermal power, was published in Applied Energy and supported by funding from the Department of Energy’s Small Business Innovation Research Grants program, and the Carbon Mitigation Initiative based at Princeton University.

The initial paper looked at the impact of one, first-of-its-kind plant. But as the technology is deployed at scale, it can shift and change the electricity price or market dynamics, so now the team is using long-term electricity capacity planning models to examine the long-run equilibrium outcome and impact on markets. Results from the first study helped Fervo demonstrate the added value of this novel storage method and secure a highly competitive grant from the Department of Energy’s Advanced Research Projects Agency-Energy (ARPA-E). The latest project is a joint effort by Fervo, Princeton’s ZERO Lab, Lawrence Berkeley National Lab and Rice University and will involve field demonstration and real-world data collection on the performance of the artificial fracture network and in-reservoir energy storage.

“This is the kind of stuff that we find really exciting, where you can answer this sort of open question with our energy system modeling tools, that then directly leads to further investment and innovation and, hopefully, accelerates the adoption of impactful technologies that can help us tackle climate change,” Jenkins said.