The seven-meter-long Swiss Solar Boat is no ordinary boat. Not only because it runs on solar power, but also because it has a complex single-outrigger design, a top speed of 30 knots and a pilot on board. Its asymmetrical side has earned it the name "Dahu". This year, the EPFL team behind the boat will test their full-scale design against some 40 other competitors in the Monaco Solar & Energy Boat Challenge on 6–10 July. 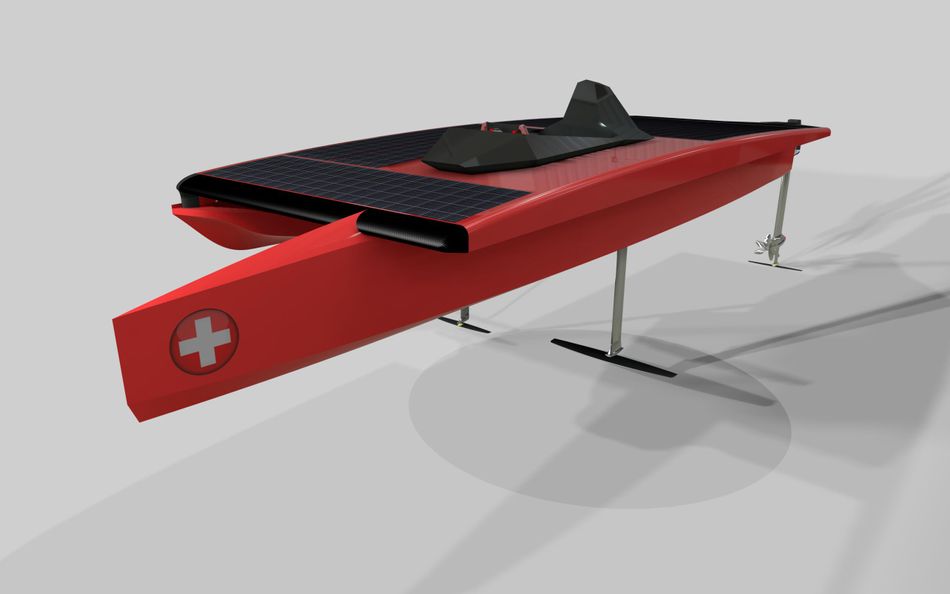 The story started back in 2014 with the HydroContest competition. During this model-boat race, which was held for six years in a row, student teams from around the world tested prototypes of their boat designs to find the best-performing one. “When the race was canceled in 2019, we worked with universities in Fribourg and Yverdon to put on the HydroContest X competition so that students could see their projects through to the end. For several months we wondered how we could take our initiative further, until we learned about the Monaco Solar & Energy Boat Challenge,” says Robin Amacher, the Swiss Solar Boat project coordinator and an experienced sailor.

During the HydroContest X in 2019, a team of EPFL students came up with the idea for a remote-controlled bifoiler. Their prototype, which had an outrigger, served as an inspiration for the Swiss Solar Boat. The Swiss Solar Boat is modeled after a proa, which is an asymmetric, multihulled Polynesian canoe with an outrigger on one side. But because the boat that will compete in Monaco is twice as big as the 2019 prototype and has a completely different shape, the engineering is much more complicated. The 60 students working on the Swiss Solar Boat have leveraged the experience acquired by previous EPFL teams over the years, but need to develop the entire power chain, from the solar panels to the battery, from scratch. 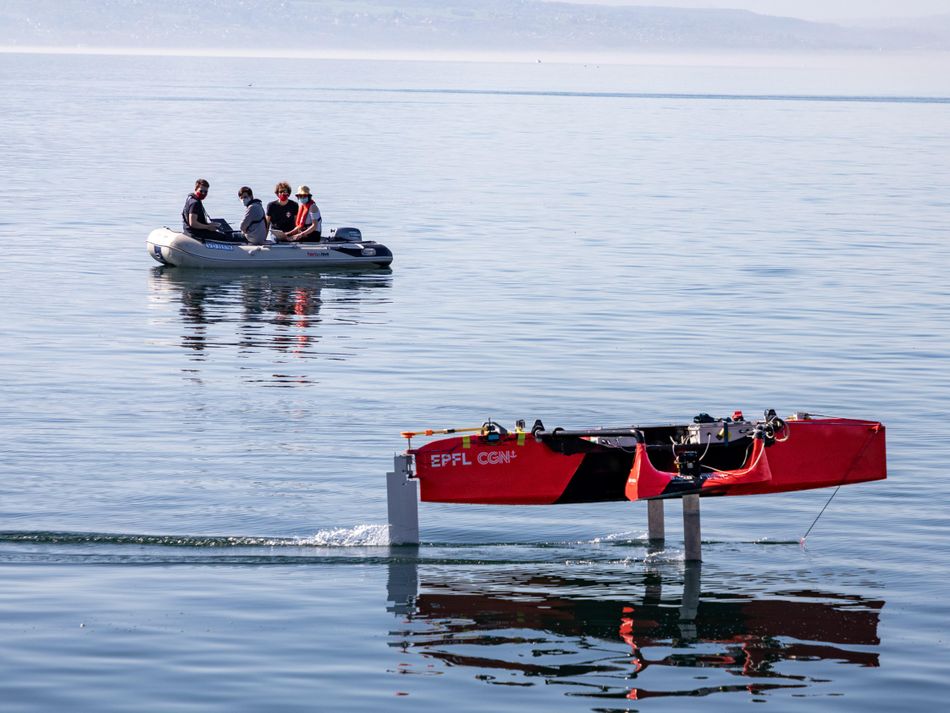 Local businesses are playing an important role in the Swiss Solar Boat venture, giving students an opportunity to work in a professional setting. One of these businesses is Decision SA, which has already helped build boats for major racing teams like Alinghi. Decision is letting students use its workshops and equipment to build their boat’s larger components. Other partner businesses include: North Thin Ply Technology, a developer of high-tech materials that’s providing the carbon fiber for the boat, and CGN, the Lake Geneva boat-transport operator, which is providing a lakeside operations base for the team along with a crane, since the Swiss Solar Boat will be too big to assemble in EPFL’s workshops. The team is also working with CSEM and EPFL’s PV Lab in Neuchâtel to develop solar panels made from monocrystalline silicon.

“We estimate the boat will cost CHF 200,000 over two years, but it’s hard to come up with an exact number. If you factor in all the time spent, the facilities we’re borrowing, the joint ventures we’ve formed and the materials we’re using, the total cost would exceed CHF 1 million,” says Amacher. 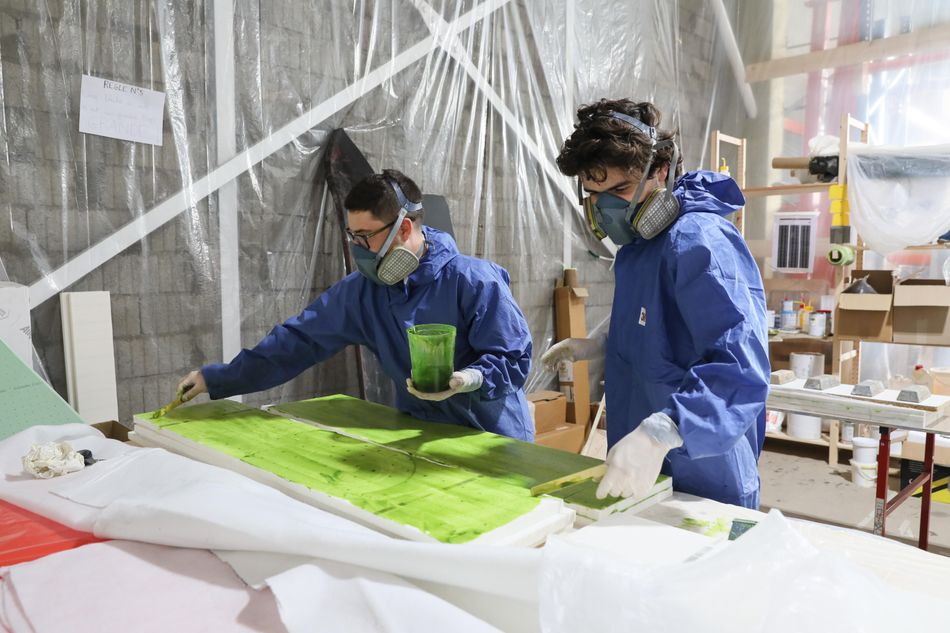 All students involved in the Swiss Solar Boat are aware of the excellent educational opportunity this kind of project provides and are fully committed to learning from each other and helping each other out.

Sébastien Jaffaux, a Master’s student in mechanical engineering, took part in the HydroContest when he arrived at EPFL in 2017. Today he’s vice president and CTO of the Swiss Solar Boat association. “What drew me to the project was the challenge of working on such a large team with people from so many different perspectives and backgrounds – from electrical engineering to microengineering,” he says.

Lukanaël Kopf, also a Master’s student in mechanical engineering, was attracted by the opportunity to apply the theory he learned in class. “I needed to step back from my classwork and calculations and take a hands-on approach, to see how the knowledge could be used for something concrete,” he says.

Students who are new to the project know that as soon as they dig in, they’ll be advised by the more experienced members. Tatiana Cogne, a Bachelor’s student in communication systems, joined the Swiss Solar Boat team eight months ago. “I signed up because otherwise I’d be spending most of my time in front of the computer. I wanted to experience something different and get involved in a cross-disciplinary project where I could work with both Bachelor’s and Master’s students from other sections,” she says.

Cogne is in the process of getting her sailing license and will be one of the substitute pilots for the race. The main pilot for now is Adrien Peltier, a Master’s student in mechanical engineering. He’s slated to sail the 7m-long, 2.4m-wide boat, which will have an average speed of 15 knots and a top speed of 30 knots or 60 km/h. “I’ll start training as soon as the boat is in the water. I’ll have to get used to how it operates and responds, pushing it to its limits but without straining the systems,” says Peltier.

Participants in the Monaco Solar & Energy Boat Challenge will have to follow strict safety rules. The boats’ batteries can be charged only by solar energy and can have a maximum storage capacity of 1.500 kWh. The boat’s electrical system can have a maximum voltage of 52 V. The battery should be installed at least one meter away from the pilot, who must wear an orange helmet and be able to evacuate the boat within five seconds without any form of outside assistance.

This will be the first time a team competes in Monaco with a proa-based, hydrofoil design – and it’s a daring feat. “I’m proud to be competing with an innovative design that’s not just a carbon-copy of other race boats,” says Amacher. “And I think that’s important for an engineering school. We’re taking risks and accepting the consequences. We’ll see if everything goes according to plan!” But even if everything doesn’t go according to plan, the students will still come out ahead. They are gaining in maturity and experience, acquiring new skills in a variety of fields, improving their teamwork and communication skills, and learning from students in other sections.