A new study by researchers from MIT, Boston Children’s Hospital, and elsewhere shows that a “social robot,” named Huggable (pictured), can be used in support sessions to boost positive emotions in hospitalized children. Image: Courtesy of the Personal Robots Group, MIT Media Lab

A new study demonstrates, for the first time, that “social robots” used in support sessions held in pediatric units at hospitals can lead to more positive emotions in sick children.

Many hospitals host interventions in pediatric units, where child life specialists will provide clinical interventions to hospitalized children for developmental and coping support. This involves play, preparation, education, and behavioral distraction for both routine medical care, as well as before, during, and after difficult procedures. Traditional interventions include therapeutic medical play and normalizing the environment through activities such as arts and crafts, games, and celebrations.

For the study, published today in the journal Pediatrics, researchers from the MIT Media Lab, Boston Children’s Hospital, and Northeastern University deployed a robotic teddy bear, “Huggable,” across several pediatric units at Boston Children’s Hospital. More than 50 hospitalized children were randomly split into three groups of interventions that involved Huggable, a tablet-based virtual Huggable, or a traditional plush teddy bear. In general, Huggable improved various patient outcomes over those other two options.

The study primarily demonstrated the feasibility of integrating Huggable into the interventions. But results also indicated that children playing with Huggable experienced more positive emotions overall. They also got out of bed and moved around more, and emotionally connected with the robot, asking it personal questions and inviting it to come back later to meet their families. “Such improved emotional, physical, and verbal outcomes are all positive factors that could contribute to better and faster recovery in hospitalized children,” the researchers write in their study.

Although it is a small study, it is the first to explore social robotics in a real-world inpatient pediatric setting with ill children, the researchers say. Other studies have been conducted in labs, have studied very few children, or were conducted in public settings without any patient identification.

But Huggable is designed only to assist health care specialists — not replace them, the researchers stress. “It’s a companion,” says co-author Cynthia Breazeal, an associate professor of media arts and sciences and founding director of the Personal Robots group. “Our group designs technologies with the mindset that they’re teammates. We don’t just look at the child-robot interaction. It’s about [helping] specialists and parents, because we want technology to support everyone who’s invested in the quality care of a child.”

“Child life staff provide a lot of human interaction to help normalize the hospital experience, but they can’t be with every kid, all the time. Social robots create a more consistent presence throughout the day,” adds first author Deirdre Logan, a pediatric psychologist at Boston Children’s Hospital. “There may also be kids who don’t always want to talk to people, and respond better to having a robotic stuffed animal with them. It’s exciting knowing what types of support we can provide kids who may feel isolated or scared about what they’re going through.”

Joining Breazeal and Logan on the paper are: Sooyeon Jeong, a PhD student in the Personal Robots group; Brianna O’Connell, Duncan Smith-Freedman, and Peter Weinstock, all of Boston Children’s Hospital; and Matthew Goodwin and James Heathers, both of Northeastern University. 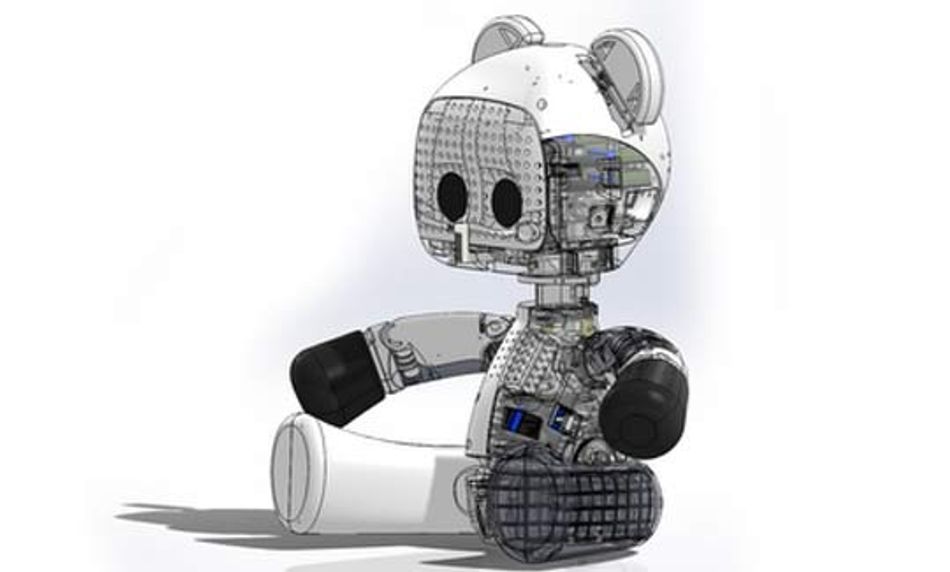 First prototyped in 2006, Huggable is a plush teddy bear with a screen depicting animated eyes. While the eventual goal is to make the robot fully autonomous, it is currently operated remotely by a specialist in the hall outside a child’s room. Through custom software, a specialist can control the robot’s facial expressions and body actions, and direct its gaze. The specialists could also talk through a speaker — with their voice automatically shifted to a higher pitch to sound more childlike — and monitor the participants via camera feed. The tablet-based avatar of the bear had identical gestures and was also remotely operated.

During the interventions involving Huggable — involving kids ages 3 to 10 years — a specialist would sing nursery rhymes to younger children through robot and move the arms during the song. Older kids would play the I Spy game, where they have to guess an object in the room described by the specialist through Huggable.

Through self-reports and questionnaires, the researchers recorded how much the patients and families liked interacting with Huggable. Additional questionnaires assessed patient’s positive moods, as well as anxiety and perceived pain levels. The researchers also used cameras mounted in the child’s room to capture and analyze speech patterns, characterizing them as joyful or sad, using software.

A greater percentage of children and their parents reported that the children enjoyed playing with Huggable more than with the avatar or traditional teddy bear. Speech analysis backed up that result, detecting significantly more joyful expressions among the children during robotic interventions. Additionally, parents noted lower levels of perceived pain among their children.

The researchers noted that 93 percent of patients completed the Huggable-based interventions, and found few barriers to practical implementation, as determined by comments from the specialists.

A previous paper based on the same study found that the robot also seemed to facilitate greater family involvement in the interventions, compared to the other two methods, which improved the intervention overall. “Those are findings we didn’t necessarily expect in the beginning,” says Jeong, also a co-author on the previous paper. “We didn’t tell family to join any of the play sessions — it just happened naturally. When the robot came in, the child and robot and parents all interacted more, playing games or in introducing the robot.” 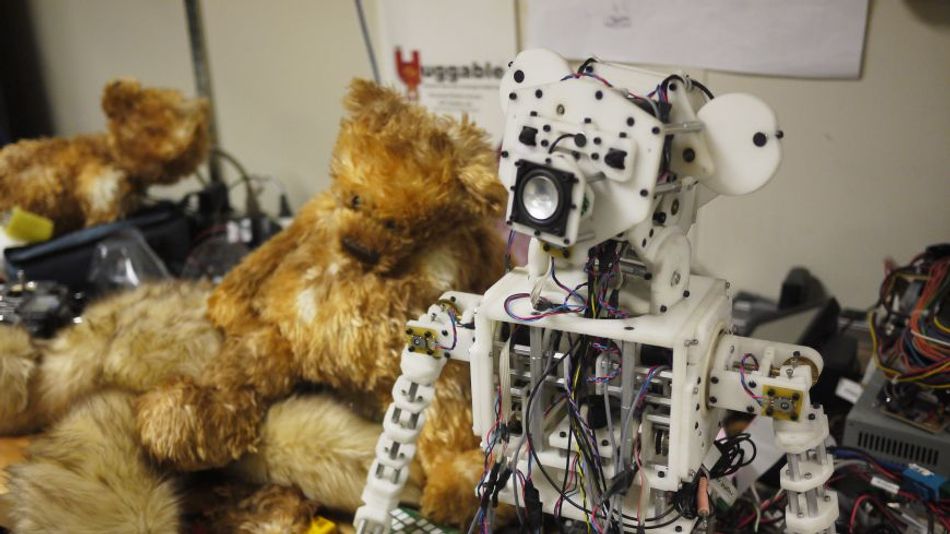 The study also generated valuable insights for developing a fully autonomous Huggable robot, which is the researchers’ ultimate goal. They were able to determine which physical gestures are used most and least often, and which features specialists may want for future iterations. Huggable, for instance, could introduce doctors before they enter a child’s room or learn a child’s interests and share that information with specialists. The researchers may also equip the robot with computer vision, so it can detect certain objects in a room to talk about those with children.

“In these early studies, we capture data … to wrap our heads around an authentic use-case scenario where, if the bear was automated, what does it need to do to provide high-quality standard of care,” Breazeal says.

In the future, that automated robot could be used to improve continuity of care. A child would take home a robot after a hospital visit to further support engagement, adherence to care regimens, and monitoring well-being.

“We want to continue thinking about how robots can become part of the whole clinical team and help everyone,” Jeong says. “When the robot goes home, we want to see the robot monitor a child’s progress. … If there’s something clinicians need to know earlier, the robot can let the clinicians know, so [they’re not] surprised at the next appointment that the child hasn’t been doing well.”

Next, the researchers are hoping to zero in on which specific patient populations may benefit the most from the Huggable interventions. “We want to find the sweet spot for the children who need this type of of extra support,” Logan says.

Check out the project description of the Huggable on Wevolver here.