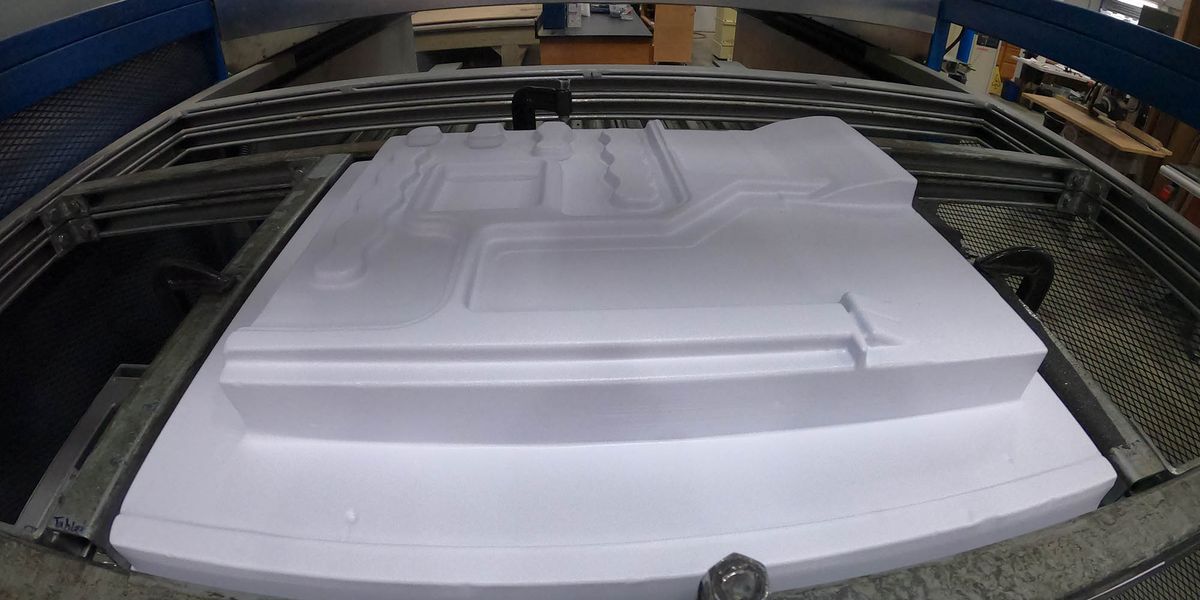 It has become clear in recent years that a large segment of Additive Manufacturing’s (AM) value comes from being used as a complement to established manufacturing processes. In particular, use of AM to enhance and streamline tooling and molding processes.

A collaborative team made up of Massivit 3D, an Israeli-based specialist in large-format 3D printing; 3D Composites, a Washington-based manufacturing company; and ACS Hybrid, an application and material processing consultancy based in Washington have demonstrated that large-scale additive manufacturing is not only viable for the production of thermoforming tooling, but that it is more streamlined and efficient than existing thermoforming tooling techniques.

Before illustrating how Massivit 3D and its partners leveraged 3D printing to improve thermoforming tooling processes, it is important to first look at the specific challenges associated with the traditional process. Thermoforming itself is a manufacturing technique that consists of forming plastic sheets—softened with heat—with the use of a mold and a vacuum. The process is straightforward and suitable for mass production. Where the hurdles arise, however, is in the production of the thermoforming mold, or tool.

Thermoforming molds are made using subtractive manufacturing methods and require multiple steps to complete, from designing the tool in CAD, to programming CAM tool-paths, to milling and drilling, to post-processing. From beginning to end, it can take weeks for a single thermoforming tool to be made. Furthermore, conventional tools are typically made from metal and have high raw material costs, while the subtractive process generates material waste. Finally, due to the design and size limitations of subtractive manufacturing, larger and more complex tools have to be manufactured in several different pieces, which then require time and labour to assemble.

Despite the theoretical benefits of additive manufacturing for the production of thermoforming tools, the question remained: would a 3D printed tool be durable and high-quality enough to undergo the thermoforming process repeatedly?

To better understand the potential of large-scale AM for thermoforming tools, Massivit 3D, 3D Composites, and ACS Hybrid set out to 3D print a tool that could meet the stringent requirements of the aerospace industry. 3D Composites selected a large-scale aerospace production tool that typically required several tooling processes, bonding, and finishing steps to complete. For the purpose of their proof of concept, the partners opted to build a section of the tool rather than the whole thing.

Even at an early stage, the partners saw benefits. Whereas the original tooling component would be made from 12 CNC milled pieces, the 3D printed version only required two parts. These two pieces were 3D printed on a Massivit 1800 Pro 3D printer—with a build volume of 5 x 4  x 6 feet (1.45 x 1.11 x 1.8 metres)—and Dimengel 90, a proprietary photo polymeric acrylic gel offered by Massivit 3D. On the highest resolution, the tooling components took 16 hours to print and consumed 2.75 kg of material. The total cost of the material was just $220 USD —substantially less than a metallic workpiece for CNC machining. 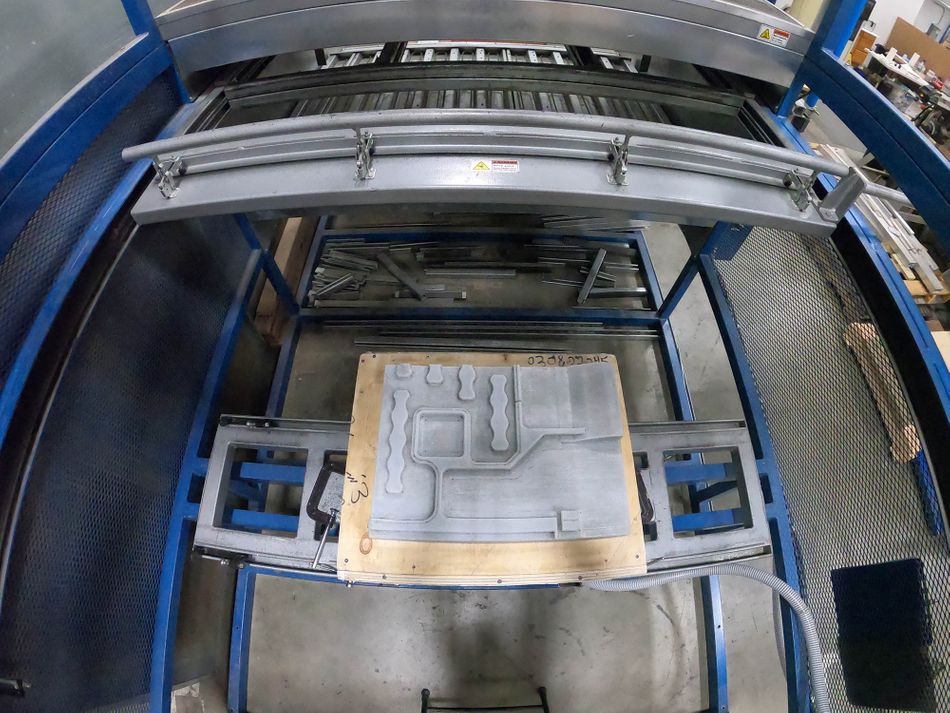 From there, the part underwent several post-processing steps with the aim of reinforcing the tool. First, a hole was drilled in the hollow 3D printed mold, into which a two-part epoxy resin was poured. The mold was then rotated to coat the inside layer of the 3D printed shell with the resin, which was then cured. This coating functioned to increase the part’s heat resistance. From there, two holes were drilled into the side of the mold and a two-part expanded polystyrene foam was injected. This step provided additional rigidity as well as better heat dissipation. Next, the 3D printed surface was sanded to remove any traces of layers. Finally, small holes were added to the tool to improve air flow during the thermoforming process.

A solid proof of concept

At every stage—both pre and post thermoforming—the 3D printed tool was inspected to identify any issues and ensure the highest quality. Before thermoforming, the tool was transported to 3D Composites’ facility in Arlington, WA, where a Creaform Handyscan 3D scanner was used to measure baseline dimensions. These would be compared to another set of measurements taken after the thermoforming process to determine any warpage.

In the production stage, the 3D printed thermoforming tool was used to form a 0.063” (1.6mm) sheet made of ABS, which was heated between 85 and 120 seconds before being placed on the mold. The tool and plastic sheet then underwent a vacuum seal for roughly 25 seconds before the tool was pulled from the finished part. In their proof of concept, the partners repeated the thermoforming process with 45 sheets of ABS plastic.

Based on heat measurements taken throughout the 45 thermoforming pulls, the 3D printed tool performed very well, with a temperature line leveling out at around 154 degrees F (67.8 degrees Celsius). Over the course of the production process, heating times for the ABS sheets were varied slightly to maintain a stable temperature, and the tool managed to stay below the observed glass transition temperature thus proving its integrity and viability. 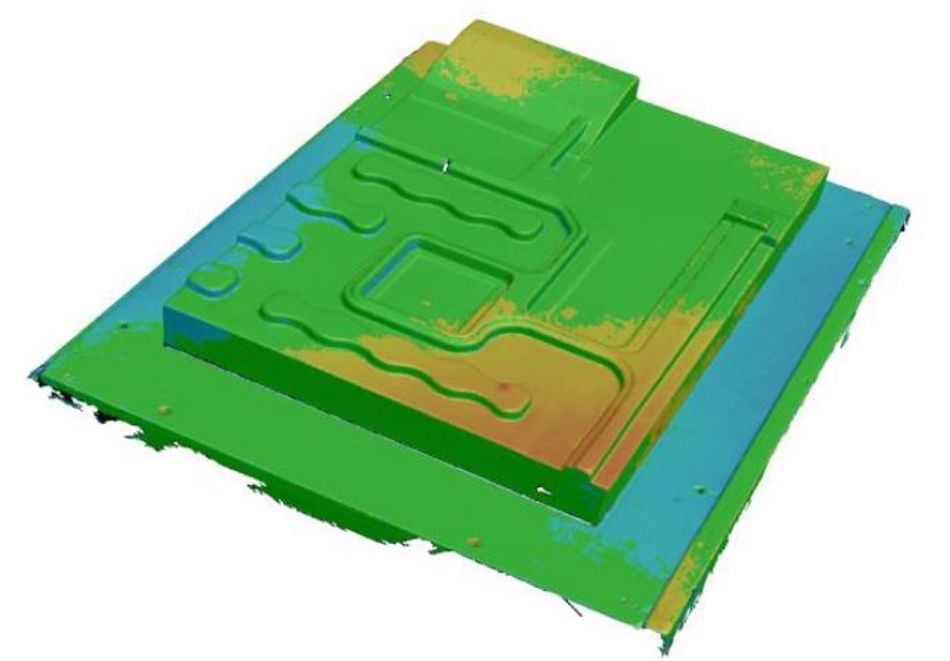 Once the 45 ABS sheets were successfully formed, 3D Composites went in once again with visual inspection equipment to identify any potential wear or defects on the tool surface. Based on this initial inspection, no problems were found. The team then conducted a 3D scan of the tool to compare the post-production dimensions to the pre-production dimensions. The 3D scan results concluded that the tool surface had only warped marginally—by +0.025” on the front left and back right corners. The slight warpage was likely due to the heat endured over the course of the thermoforming process.

Despite this small discrepancy, the tool performed well, producing 45 sheet parts with virtually no sign of degradation. The thermoforming operator testing the additive manufactured tool expressed confidence in the part, saying: “This tool is good to go, I wouldn’t even put a number on how many pulls it will last.”

Ultimately, the proof of concept is an excellent example of how large-scale additive manufacturing can enhance traditional production processes like thermoforming. Additive manufacturing itself, while well suited to one-off or short production runs, is not yet scalable for mass production, especially for large parts. Well-established processes like thermoforming are therefore still needed to achieve larger production volumes. As demonstrated by Massivit 3D and its partners, where AM can play a role is in improving these conventional processes by streamlining the production of tools to facilitate scale production.

The Next Generation of Rapid Automotive Prototyping