Xinjing Huang, a doctoral student in Forrest’s lab, holds a solar cell module with 40% transparency, based on the formula with an estimated 30-year lifetime. Photo: Robert Coelius

A new transparency-friendly solar cell design could marry high efficiencies with 30-year estimated lifetimes, research led by the University of Michigan has shown. It may pave the way for windows that also provide solar power.

“Solar energy is about the cheapest form of energy that mankind has ever produced since the industrial revolution,” said Stephen Forrest, the Peter A. Franken Distinguished University Professor of Electrical Engineering, who led the research. “With these devices used on windows, your building becomes a power plant.”

While silicon remains king for solar panel efficiency, it isn’t transparent. For window-friendly solar panels, researchers have been exploring organic—or carbon-based—materials. The challenge for Forrest’s team was how to prevent very efficient organic light-converting materials from degrading quickly during use.

The team, including researchers at North Carolina State University and Tianjin University and Zhejiang University in China, set out to change that. In their experiments, they showed that without protecting the sunlight-converting material, the efficiency fell to less than 40% of its initial value within 12 weeks under the equivalent of 1 sun’s illumination. 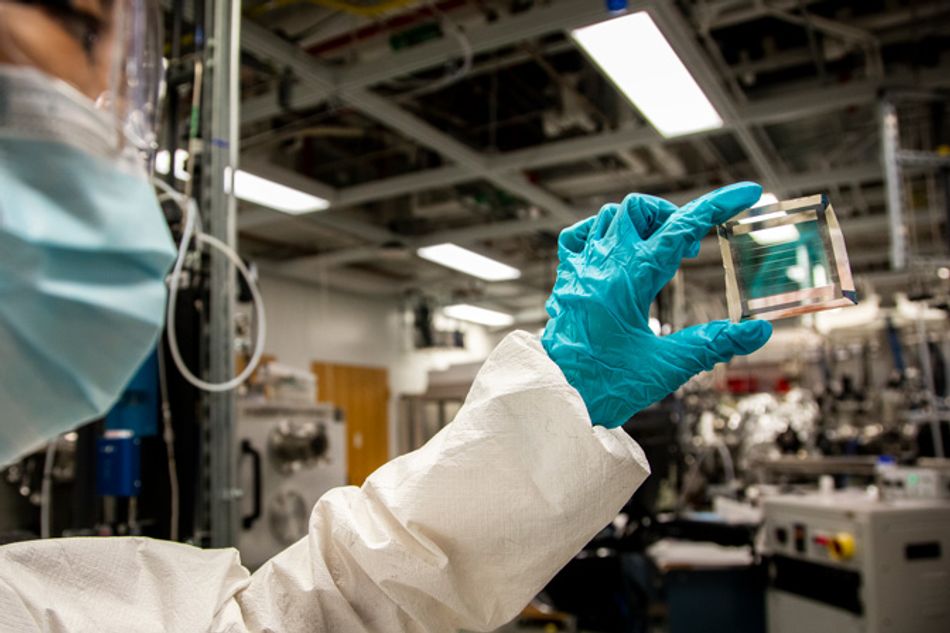 Xinjing Huang, a doctoral student in Forrest’s lab, holds a solar cell module with 40% transparency, based on the formula with an estimated 30-year lifetime. Photo: Robert Coelius/Michigan Engineering.

By studying the nature of the degradation in those unprotected solar cells, the team recognized that they only needed shoring up in a few places. First, they’d need to block out that UV light. For that, they added a layer of zinc oxide—a common sunscreen ingredient—on the sun-facing side of the glass. 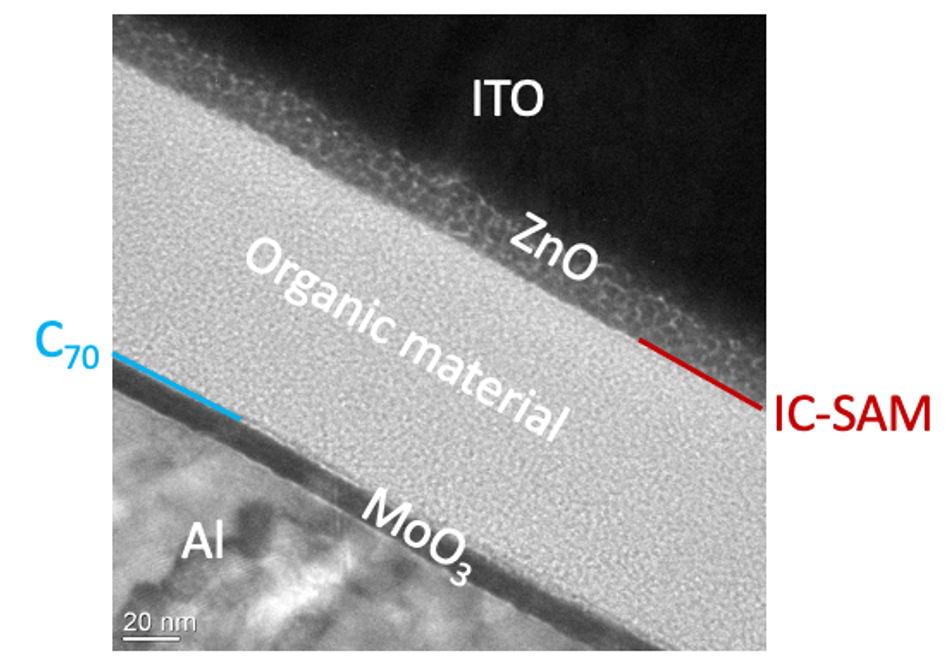 Transmission electron microscope (TEM) image of a cross-sectional slice of an OPV with the added layers of material (IC-SAM and C70) between the organic material and the external buffers, after the material was subjected to high intensity light to replicate an estimated age of 30 years. It reveals an intact organic active region with no breakdown at the edges. Credit: Kan Ding, University of Michigan

A thinner zinc oxide layer next to the light absorbing region helps conduct the solar-generated electrons to the electrode. Unfortunately, it also breaks down the fragile light absorber, so the team added a layer of a carbon-based material called IC-SAM as a buffer.

In addition, the electrode that draws positively-charged “holes”—essentially spaces vacated by electrons—into the circuit can also react with the light absorber. To protect that flank, they added another buffer layer, this one a fullerene shaped like a soccer ball.

The team then tested their new defenses under different intensities of simulated sunlight, from the typical 1 sun up to the light of 27 suns, and temperatures up to 150 degrees Fahrenheit. By studying how the performance degraded under these conditions, the team extrapolated that the solar cells would still be running at 80% efficiency after 30 years.

Forrest sees a future of these devices “coming to a window near you.” His team has already increased the transparency of the module to 40%. They believe they can approach 60% transparency.

They’re also working on bumping up the efficiency from the 10% achieved in the reported semitransparent modules, closer to the 15% believed to be possible at high transparency. Because the materials can be prepared as liquids, the manufacturing costs are expected to be relatively low.

Part of the research was conducted in the U-M Lurie Nanofabrication Facility. Forrest is also the Paul G. Goebel Professor of Engineering. He is a professor of electrical engineering and computer science, physics, and materials science and engineering.

An international collaboration led by EPFL chemical engineers has overcome a problem in the manufacturing of perovskites that reduces their efficiency as solar panels. The approach produced perovskite solar panels with an efficiency of 23.9% and operational stability longer than 1000 hours.

Thin-film photovoltaics: Efficient and versatile in a double pack