Sensor fusion refers to the capability to combine input from different radars, LiDARs, cameras to create a single image of an environment around a vehicle.

Such a process is required as sensor imperfections are a certainty. No system can afford the luxury of operating under pristine, lab-grade conditions, where distractions never happen.

Aside from external disturbances in working conditions, there are also the sensor’s own issues—drifting, inaccuracies, or just plain crazy black box errors.

Sensor fusion is one component you’ll use to design this ‘better’ system. An example of typical sensors used to perceive the environment. Note that various vehicle manufacturers may use different combinations of sensors and might use all of the displayed sensors. For example, increasingly multiple smaller LIDAR sensors are being used, and long-range backward-facing RADAR can be incorporated to cover situations like highway lane changing and merging. The placing of the sensors can vary as well. Image: Wevolver

What is sensor fusion?

You might be more familiar with sensor fusion if I call it “data fusion,” “information fusion,” or even “multi-sensor integration.”

These phrases are often mentioned like they’re the same thing.

But a sensor fusion system can involve all these principles at the same time.

‘Better’ in this sense can be something as simple as a more accurate representation, more complete data, or even inferred information that isn’t directly measured by current sensors.

4 reasons to use sensor fusion

Issues come up when you use sensors.

Whether it’s something caused by imperfection of the sensor itself, like noise and drifting, or an external factor, like an extraordinary operating condition.

Certain as they are, you can side-step these issues by strengthening your data stream with multiple sensors, whether they’re duplicates or heterogeneous sources.

Let’s say you want to measure the vibration of a bridge when a vehicle passes.

You left an accelerometer overnight, which transmits the data live to a computer in your office.

When you saw the data the next morning, you noticed that there’s an outlier in your data—a sudden burst in your accelerometer’s wavelength.

Did a particularly big truck just happen to pass by? Is it just plain sensor craziness? Or is there a cyclist who knocked the accelerometer out of its position?

This is where using multiple sensors and a sensor fusion algorithm helps.

The margin of error for your system gets smaller when you use sensor fusion to merge sensory data from multiple sources, as opposed to trusting a single sensor to perform exceptionally well throughout the entire operation.

When observed from a high-level, the setup you’ll need for a sensor fusion network is fairly simple.

You have the sensors, which give an input of raw data to the estimation framework, where the algorithm will transform your raw data into a specific output.

Depending on the algorithm you’re using, the output could be an entirely unique set of information, or it could be a more accurate version of your raw data.

However, the algorithm, the architecture of the overall system, and the sensor setup will depend on what sensors you have and what information you want to get out of this sensor fusion system.

Let’s start with the easier part and get to know the types of sensor fusion systems, based on the setup, architecture type, and levels of fusion.

Based on its architecture, there are three main types of sensor fusion systems: centralized, decentralized, and distributed. (Castanedo, 2013)

There is also a hierarchical type, which combines the decentralized and distributed system through a hierarchy, but let’s stick to the three main types for this brief explanation.

Depending on your application, your sensor measurement data will transform into different levels of data as it goes through your system. Ackoff states that the hierarchy of your data can take the form of data, information, knowledge, and wisdom. 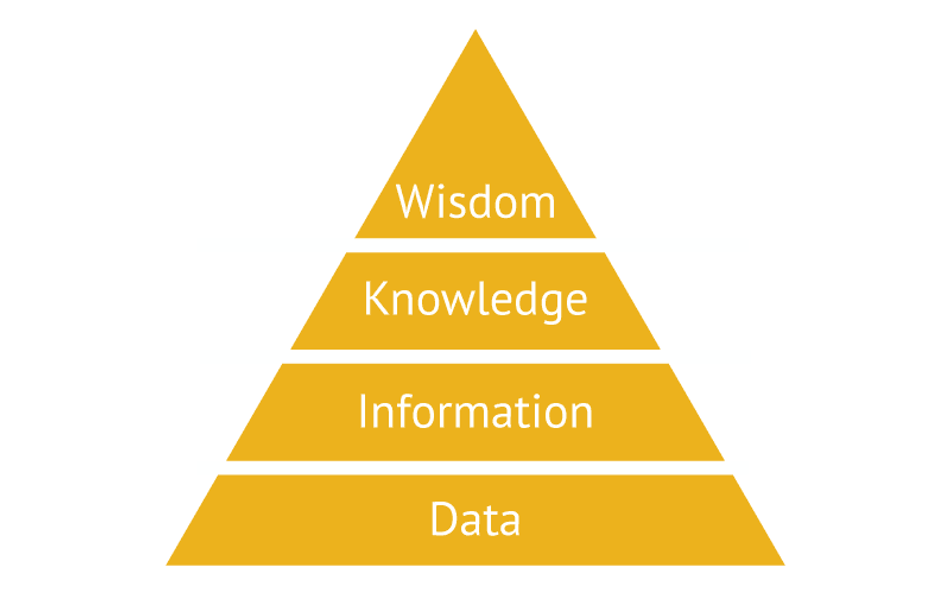 In this pyramid, data is raw data. Or basically just an input from your measurement system —whether it’s numbers, symbols, signals, or others—that you can’t really make sense of just yet.

The next level, information, is still data but this time tagged with the relevant context so it becomes more useful and easily visualized.

While knowledge is obtained by assembling the pieces of information and relating it to what you want to find out. In short, knowledge is where the data starts to become useful for you.

The top of our pyramid, wisdom, is a little harder to define. But just like everything else before it, it builds on knowledge. This time to ask more abstract questions like ‘why’ and eventually get a decision.

As you can see, this categorization only moves from one level to the next. The problem is when you have a system that crosses levels. Here, you can use Dasarathy’s categorization, which uses input and output data format as the parameter. 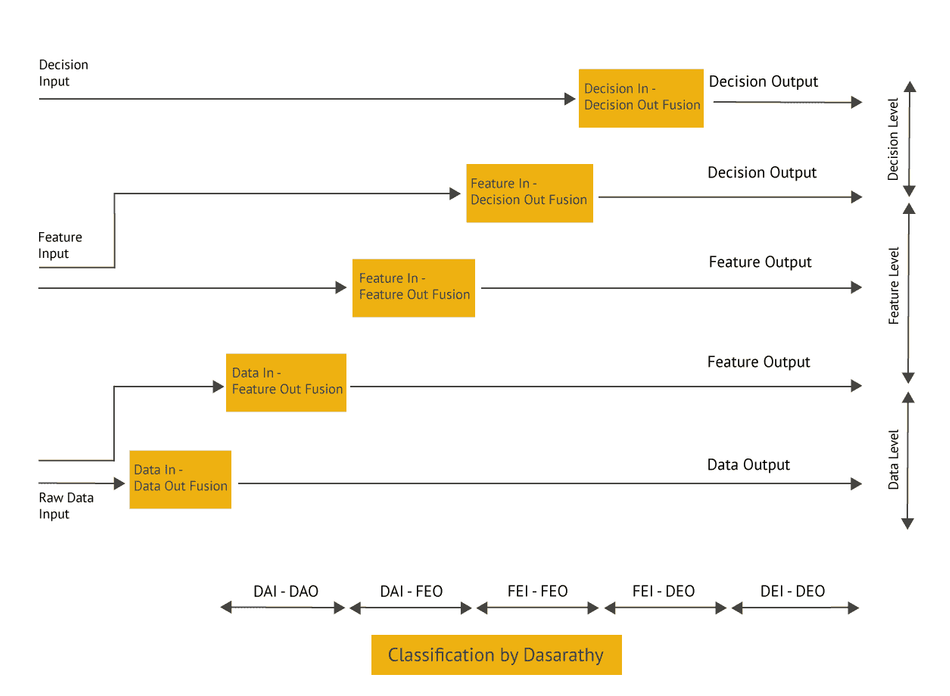 Autonomous vehicles need a lot of input to get a sense of their ever-changing environment.

To prevent crashes, the system needs a model of the external and internal state, which will need to be measured using a combination of several sensors, including radar, lidar, and cameras.

Naturally, each sensor has its own strength and weakness. To get an accurate depiction of the environment and improve the robustness of the system, you’ll need to combine the data from each sensor.

For instance, you need cameras to get more context about the environment and classify objects. On the other hand, lidar and radar are better at determining the distance of the car from an object.

The table below depicts how these three sensors can benefit from each other.

There are many more applications of sensor fusion in autonomous vehicles. It’s also needed for many other safety features required by an autonomous vehicle, such as 3D object detection, tracking, and occupancy mapping. (Lindquist, 2011)

Want to use sensor fusion in your next project?

So now that you’ve peeked into the world of sensor fusion, there’s one more topic we haven’t covered yet. Just because it’s such a broad topic.

It will largely depend on what you’re trying to do. The algorithm you’ll need to get more precise data for your lab-contained robots will most likely differ from one to prevent crashes on autonomous cars.

After you’ve decided on the requirement of your system and which sensors to use, you can start thinking about which algorithm you’ll use to create a sensor fusion system that matches your needs.

To get a basic idea about what kind of algorithm you need, you can start with the most popular filters for sensor fusion: the Kalman filter, an estimation framework widely used for its predictive capabilities.

Why Heatmaps Are A Powerful Tool for Facilities Management

Dhiya Hani is a writer for technology and B2B companies. She has a Bachelor's Degree in Engineering Physics with a specialization in instrumentation, sensors, control system, and renewable energy. With a soft spot for technology and engineering topics, she continues to renew her knowledge in various...

In 2022, most people have access to more technology than ever before. From solutions that make jobs more fulfilling to innovations that improve personal life, people have come to rely on technology for an increased standard of living.

Why Heatmaps Are A Powerful Tool for Facilities Management

For instance, the integration of sensors and sensor networks within Facilities Management processes enables the automated identification of dangerous situations, while at the same time facilitating the discovery and tracking of energy usage patterns.

Continued research on biosensors is the way to ensure humanity stays ahead of time. Presenting the biosensors developed by the top 5 highest voted teams during SensUs Student Competition 2021.