Specialists from ITMO University’s ChemBio Cluster developed a new minimally invasive method to treat venous thrombosis. Its key feature is the application of robots made from a soft magnetic composite material that can change its shape and extract clots without damaging the blood vessels. This method will help make surgeries quicker and safer.

Thrombosis is a condition when blood clots (thrombi) appear in blood vessels. They obstruct the blood flow by blocking veins. This leads to the clogging of vessels and may result in a stroke or heart attack that can be deadly.

There are two key methods to treat thrombosis – anticoagulant therapy and surgery. Noninvasive treatment means taking special medications (anticoagulant, fibrinolytic, and thrombolytic drugs) that thin the blood and lower the cholesterol level. However, these drugs can cause internal bleeding and are considered a less safer option.

During the surgery, a metallic catheter is injected into the patient’s popliteal fossa and is being pushed further until the thrombus is reached and seized. During this procedure, the catheter can scratch the walls of blood vessels. This damage leads to the formation of new blood clots and the patient has to undergo the surgery again.

Specialists at ITMO University’s ChemBio Cluster came up with a new minimally invasive method of treatment. It’s based on up to one-and-a-half centimeter big robots made from a soft magnetic composite material. This material consists of a soft elastomeric matrix with ferromagnetic particles and a temperature-responsive polymer placed inside it. Such a construction allows robots to move in a vein, change its form under the influence of a magnetic field, and seize thrombi in four minutes without damaging blood vessel walls. 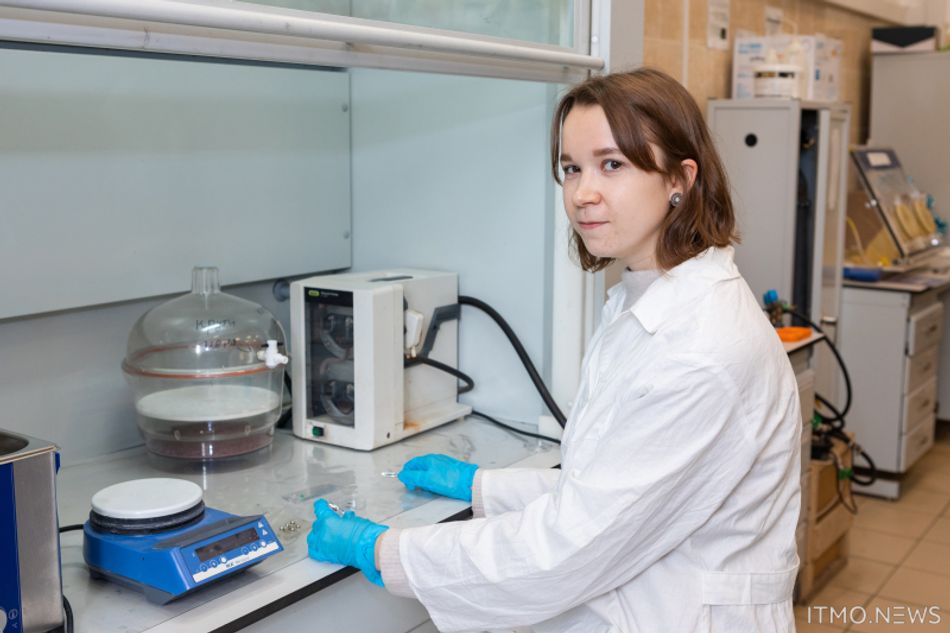 “Our robot has several advantages as compared to other existing methods. The softness and biocompatibility of the material will make it possible to conduct surgeries in almost any body part without harming the vessel walls. At the same time, it’s not necessary to inject the device into the popliteal fossa like it happens during the standard procedure. Moreover, during a conventional surgery, the doctor should be extremely careful to avoid damaging the blood vessel walls  with a catheter. This means that the result of the surgery depends on the human factor. Our method is less dangerous as the doctor controls robots remotely. This opens up new opportunities for telemedicine,” says Anna Pozhitkova, a second-year Master’s student at the ChemBio Cluster and the first author of the paper.

The development of robots

At the preliminary stage of research, the scientists created a biocompatible material. To achieve that, they’ve mixed synthesized ferromagnetic particles with a temperature-responsive polymer and embedded them into an elastomeric matrix, thus creating a composite material.

The next step was to design robots so that they would be able to move in liquids. The scientists came up with three different options, all inspired by nature. In the first case, the material is able to take the form of a spiral like spirulina. In the second model, the robot swims like a diver – by moving its flippers. The third option is to make the robot look like a harpoon that imitates the movement of sharks: there are two fins on each side of the body that help stay balanced, while the tail helps it move. The analysis showed that the form of a spiral is the best way to go, as it allows the robot to move faster and have a better grip on the thrombus, as well as move on its own thanks to its streamlined form. 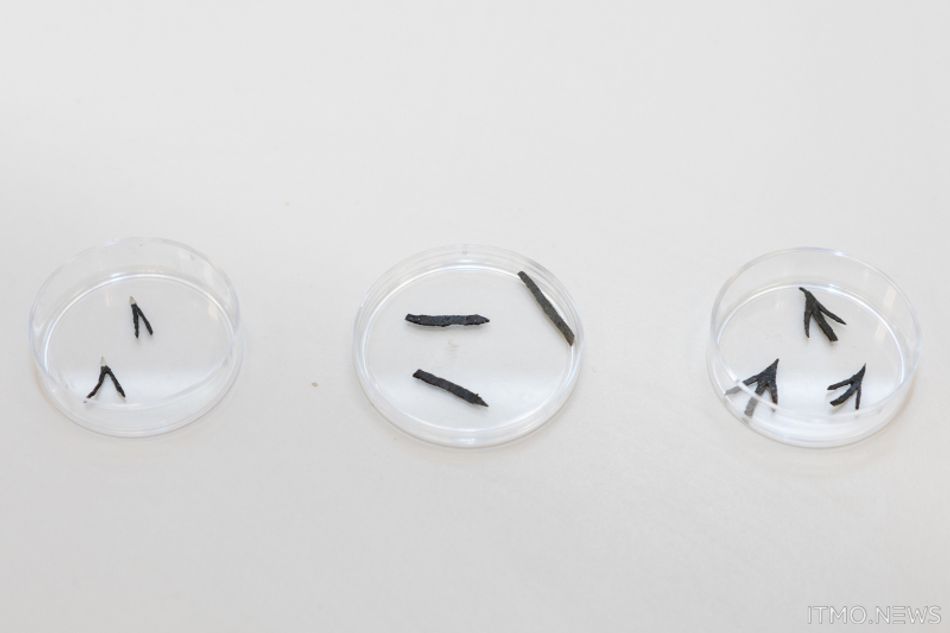 Three designs for soft robots (the diver, the spiral, and the harpoon). Credit: Dmitry Grigoryev, ITMO.NEWS.

But the most important task for the researchers was to find a way to make the robots change their form, move in the liquid, and interact with a thrombus. The thing is, if you simply place a composite material near a magnet, it will be attracted to it but nothing else is going to happen. In order to solve this problem, the scientists decided to reprogram the device.

First, the composite material was heated to 58°C, the melting point of the temperature-responsive polymer located inside the elastomeric matrix with ferromagnetic particles. This made the polymer viscous, allowing the particles to freely move inside the matrix. Then, the heated composite material was placed inside the magnetic field, so that it interacted with the fields of particles, resulting in required changes in robots’ field domains. In other words, prior to reprogramming the domains were facing one direction and each robot was uniformly attracted to the magnetic field, and after the procedure, parts of the system were moving differently thanks to different domain directions: some of them folded into spirals, others remained straight. 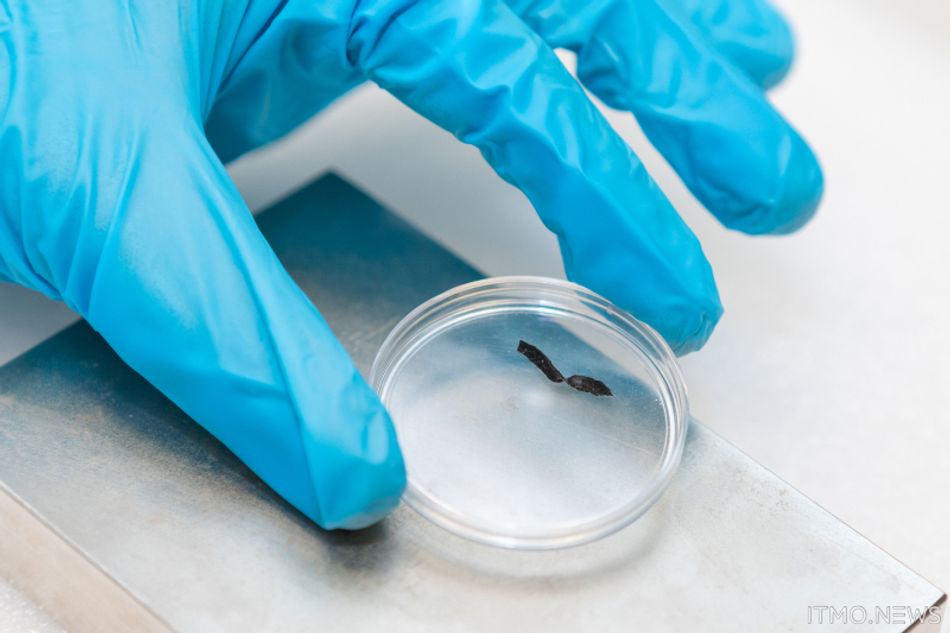 At the last stage of preparation, the material was cooled down inside the magnetic field. This allowed the temperature-responsive polymer to solidify, while the particles aligned, fixed in the right direction. Now, to control the robots and make them change shape, the researchers need to subject them to the magnetic field; this way, a band made from the composite material can first turn into a spiral and then go back to its initial form.

From lab experiments to in vivo tests

For the experiment, the scientists used a glass tube that had a liquid with blood-like viscosity flowing inside of it to imitate a blood vessel. A robot was placed inside the tube and started moving towards the fibrous clot located further down. As soon as the robot came close, affected by the magnetic field, it turned into a spiral, resembling a corkscrew. Affected by the physical impact, the fibrinous structure of the clot stretched, allowing the robot to bore into it and capture the clot. Then, following the magnetic field, the clot-bearing robot returned to the start of the tube, where it was picked up by the researchers.

The experiment on thromboextraction without thrombolytics: the robot reaches the clot, penetrates it, and extracts it from the system imitating a blood vessel.

In the future, this technology can be applied in clot removal surgeries, as it allows surgeons to precisely control the robot’s location in the body as it reaches the clot, captures, and extracts it. Experiments with blood clots led the researchers to conclude that thrombolytics will be needed to ensure that the robot captures them. As this project was focused on robot applications without additional medical substances, the researchers turned solely to fibrin clots, which consist of fibrin strands and not blood.

“Our project is the first stage in developing a minimally invasive approach to thrombosis treatment using soft composite materials. A different robot design will be needed for various types of clots that can be found in the human body. In this sense our project can become a solution for personalized medicine, where robots of specific designs and sizes will be available for every case. Moreover the results we demonstrated will help researchers find answers to many questions that will arise during in vivo testing. For instance, the way robots interact with blood clots with thrombolytics and without them or the methods for introducing sensors inside the magnetic system to track the robot’s location,” concludes Anna Pozhitkova.

Simple microstructures that bend, twist and perform stroke-like motions could be used for soft robotics, medical devices and more

Synthesis too slow? Let this robot do it.

Tiny Tides is an automated fast-flow instrument that can synthesize peptide-nucleic acids in a single shot.