Robots have been working in factories for many years. But given the complex and diverse tasks they perform, as well as related safety concerns, most of them operate inside cages or behind safety glass to limit or prevent interaction with humans.

In warehouse operations, where goods are continuously sorted and moved, robots can be neither caged nor stationary. And while large corporations like Amazon have already incorporated robots into their warehouses, they are highly-customized and costly systems where robots are designed to work within one particular facility on predefined grids or well-defined pathways under the guidance of specific centralized programming that carefully directs their activity.

“For robots to be most useful in a warehouse, they will need to be smart enough to deploy in any facility easily and quickly; able to train themselves to navigate in new dynamic environments; and most importantly, be able to safely work with humans, as well as sizeable fleets of other robots,” said Ding Zhao, the principal investigator and assistant professor of mechanical engineeringOpens in new window.

At Carnegie Mellon University, a team of engineers and computer scientists have employed their expertise in advanced manufacturing, robotics, and artificial intelligence to develop the warehouse robots of the future.

The collaboration was formed at the university’s Manufacturing Future’s InstituteOpens in new window (MFI), which funds such research with grants from the Richard King Mellon Foundation. The foundation made a lead $20 million grant in 2016 and gave an additional $30 million in May 2021 to support advanced manufacturing research and development at MFI.

Zhao and Martial HebertOpens in new window, the dean of the School of Computer Science and a professor at the Robotics Institute, are leading the warehouse robot project. They have investigated multiple reinforcement learning techniques that have shown measurable improvements over previous methods in simulated motion planning experiments. The software used in their test robot has also performed well in path planning experiments at Mill 19, MFI’s collaborative workspace for advanced manufacturing.

“Thanks to the advance in chips, sensors, and advanced AI algorithms, we are at the cusp of revolutionizing the manufacturing robots,” said Zhao. The team leverages previous work in self-driving cars to the development of warehouse robots that can learn multi-task path planning via safe reinforced learning, training robots to quickly adapt to new environments and operate safely with workers and human-operated vehicles.

MAPPER: Robots that can learn to plan their own pathways

The group first developed a methodOpens in new window that could enable robots to continuously learn to plan routes in large dynamic environments. The Multi-Agent Path Planning with Evolutionary Reinforcement (MAPPER) learning method will allow the robots to explore by themselves and learn by trial and error in a manner similar to the way human babies accumulate more experience to handle various situations over time.

The decentralized method eliminates the need to program the robots from a powerful central command computer. Instead, the robots make independent decisions based on their own local observations. The robots’ partially observable capabilities will enable their onboard sensors to observe dynamic obstacles within a 10–30-meter range. But with reinforced learning, robots will continually, if not indefinitely, train themselves how to handle unknown dynamic obstacles. 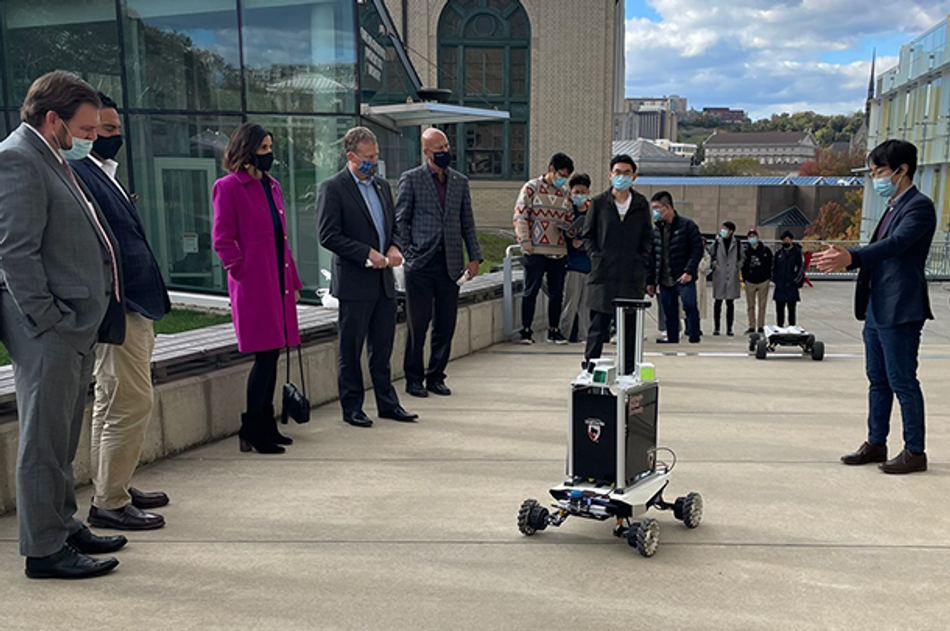 Such smart robots can enable warehouses to employ large fleets of robots more easily and quickly. Because the computation is done with each robot’s onboard resources, the computation complexity will increase mildly as the robot number increases, which will make it easier to add, remove, or replace the robots.

Energy consumption could also be reduced when robots travel shorter distances because they are able to independently learn to plan their own efficient paths. And the “decentralized and partially observable” setting will reduce the communication and computation energy when compared to classical centralized methods.

RCE: Robots that prioritize safety while in pursuit of programmed goal

Another successful studyOpens in new window applied the use of a constrained model-based reinforcement learning with Robust Cross-Entropy (RCE) method.

Researchers must explicitly consider safety constraints for a learned robot so that it does not sacrifice safety in order to finish tasks. For example, the robot needs to avoid colliding with other robots, damaging goods or interfering with equipment in order to reach its goal.

“Although reinforcement learning methods have achieved great success in virtual applications, such as computer games, there are still a number of difficulties in applying them to real world robotic applications. Among them, safety is premium,” said Zhao. 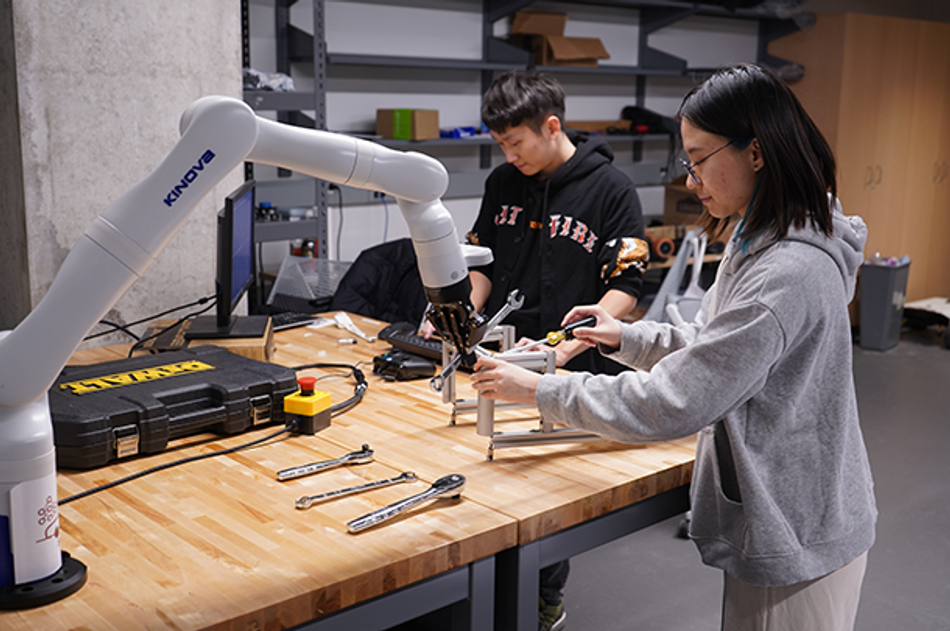 The team evaluated their new RCE method in the Safety Gym, a set of virtual environments and tools for measuring progress towards reinforcement learning agents that respect safety constraints while training. The results showed that their approach enabled the robot to learn to complete its tasks with a much smaller number of constraint violations than state-of-the-art baselines. Additionally, they were able to achieve several orders of magnitude better sample efficiency when compared with constrained model-free RL approaches.

CASRL: Robots that can learn to adapt to current conditions

To further address how robots can navigate safely in typical warehouse environments where people and other robots are moving freely—or what researchers call non-stationary disturbances, the group employed the use of a Context-Aware Safe Reinforcement LearningOpens in new window (CASRL) method, a meta-learning framework in which the robots can learn how to safely adapt to non-stationary disturbances as they occur.

In addition to workers or other robots moving around a warehouse, the CARSL method would also enable the robots to learn how to safely navigate other situations that could include inaccurate sensor measurements, broken robot parts, or obstructions such as trash or other obstacles in the environment. The team also applies CARSL to manipulation of tools and interaction with human, which can be directly applied to assembly in manufacturing.

“Non-stationary disturbances are everywhere in real-world applications, providing infinite variations of scenarios. An intelligent robot should be able to generalize to unseen cases rather than just memorize the examples provided by humans. This is one of the ultimate challenges in trustworthy AI.” said Zuxin Liu, a third year Ph.D. student at the Safe AI LabOpens in new window at CMU, supported by the MFI award.

Zhao explains that the robot must learn to determine whether the previously trained planning policies are still suitable for the current situation. The robot updates policy based on the recent local observations in an online training fashion, so that it could be easily adapted to new situations with unseen disturbances, while also guaranteeing safety with high degree of probability. Given the past several minutes/seconds sensing data, the robot can automatically infer and model the potential disturbances based on the data and update the planning policy. Zhao’s team further extends the method to task-agnostic online enforcement learningOpens in new window, which can continuously learn to solve unseen tasks with online reinforcement learning that not only is able to adapt to unseen, yet similar tasks, but also to identify and learn to solve distinct tasks.

In each of the above studies, the new models and methods improved upon prior ways of training robots to move about safely and effectively in new and changing environments. Such successful incremental steps are essential to achieving the ultimate goal of verifiable level of trustworthiness required for better warehouse robots.

The team will continue working on the deployment of manufacturing logistics and assembly manipulation. Zhao will also work on a new project funded by MFI on generating safety and security-critical digital twins/metaverse, which will be a critical tool in the development of trustworthy intelligent manufacturing robots safely and efficiently.

“The future of the next generation of manufacturing is now,” said Zhao.

In this series we will create short informative digests about popular engineering topics, enabling you to stay up to date.

Laying the ground for robotic strategies in environmental protection

Researchers from the Institute of Robotics and Mechatronics of the German Aerospace Center (DLR) and a consortium of additional DLR institutes and technology partners are investigating how aid supplies can be safely brought to their destinations using remote-controlled trucks.