The visualization depicts the mission scenario at the skylight of a lava tube on the moon with the three robot systems SherpaTT (upper left), Coyote III (lower left) and LUVMI (right). © DFKI GmbH, Grafik: Finn Lichtenberg

Water, protection, stable temperatures: When it comes to finding suitable areas for long-term lunar missions, the lava tubes on the moon are of great interest. In order to investigate their potential for future space exploration, teams of robots are meant to be enabled to enter these caves. In the project “CoRob-X”, a European consortium led by the DFKI is researching how a team of mostly autonomous robots can rappel into a tunnel and explore it. The goal of the project is an analogue mission in the Canaries, in which the systems jointly investigate a lava tube by employing new technologies from the European aerospace research. The EU is funding the project with roughly three million euros.

Teamwork pays off. This insight also applies to  the world of robotics: While current space missions still count on single systems like the NASA rover Perseverance, future scenarios will most likely involve teams of autonomous robots to  explore the surfaces of the moon and Mars – and even caves below ground. For long-term missions, extreme areas such as the craters and lava tubes of the moon are of special interest, as they can protect against radiation, meteorites and changes in temperature and may even offer water ice as a resource. Before a manned mission into the depths of earth’s satellite becomes worthwhile, these promising areas are meant to be investigated by autonomous robots. But the question is: How can the systems enter such lava tubes, and how do they get out again?

The solution can be found in an area of Artificial Intelligence (AI) that is developing into an increasingly important aspect in the planning of future space missions: collaborative autonomous robotics. The exploration via intelligent robots saves not only costs and expenses, but also avoids risks for humans. Additionally, the ability to cooperate and make decisions is a significant advantage when it comes to realizing complex mission scenarios such as the exploration of caves. For this reason, the European Commission finances research on cooperative robots for extreme environments as part of the Horizon 2020 funding programme. The project “CoRob-X”, coordinated by the German Research Center for Artificial Intelligence (DFKI), aims at realizing such a scenario in an analogue mission on earth and is funded over a period of two years with roughly three million euros. 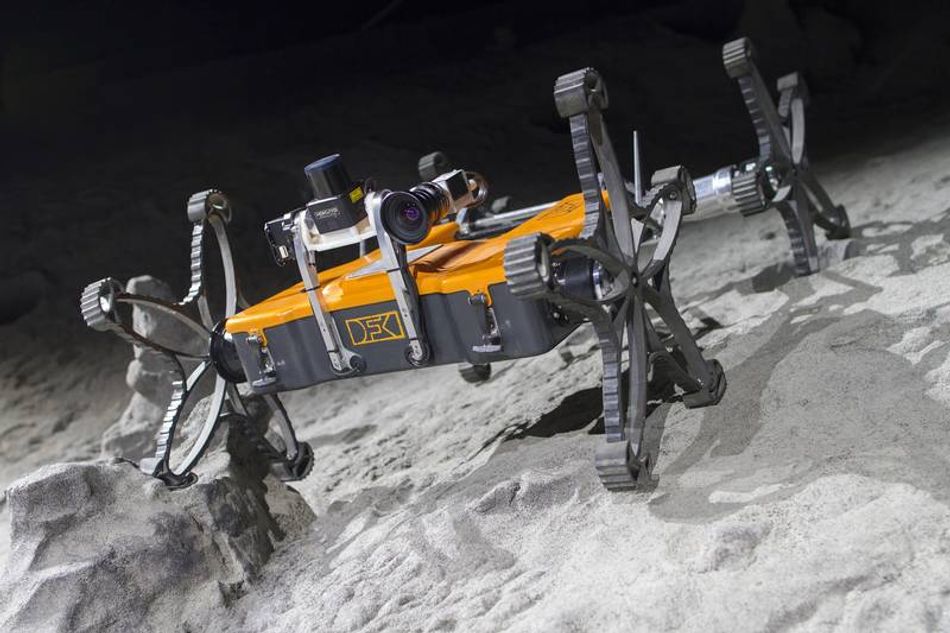 Micro-rover Coyote III can be seen on the artificial lunar crater in the Space Exploration Hall of the DFKI Robotics Innovation Center in Bremen. © DFKI GmbH, Foto: Annemarie Popp

The title “Cooperative Robots for Extreme Environments” stands for one of the final projects of the Strategic Research Clusters (SRC) “Space Robotics Technologies”, which combines several research projects for the European aerospace that were funded by the H2020 programme. For this reason, the focus of “CoRob-X”, which officially kicked off on March 1, 2021, lies on the testing and validation of technologies that were developed in the SRC and are meant to be employed in European space missions. The exploration of lava tubes is a realistic scenario, as these caves on the moon could be a key for long-term missions or even human habitats. “CoRob-X” aims at demonstrating the feasibility of such an exploration by three autonomous robot systems using SRC technologies in an analogue mission on the Canary Islands..

The mission scenario involves two systems of the DFKI Robotics Innovation Center (RIC) in Bremen as well as one robot by the Belgian company Space Applications NV/SA. Unlike the rovers that are currently used in space, these systems can make their own decisions thanks to Artificial Intelligence, which offers many advantages compared to a remote control by humans on Earth: Autonomous space robots can immediately react to their environment, include new data in their mission planning and compensate for errors faster. Finally, the teamwork is crucial for the exploration of extreme environments such as a lava tube – whether on the moon or in the Canaries. 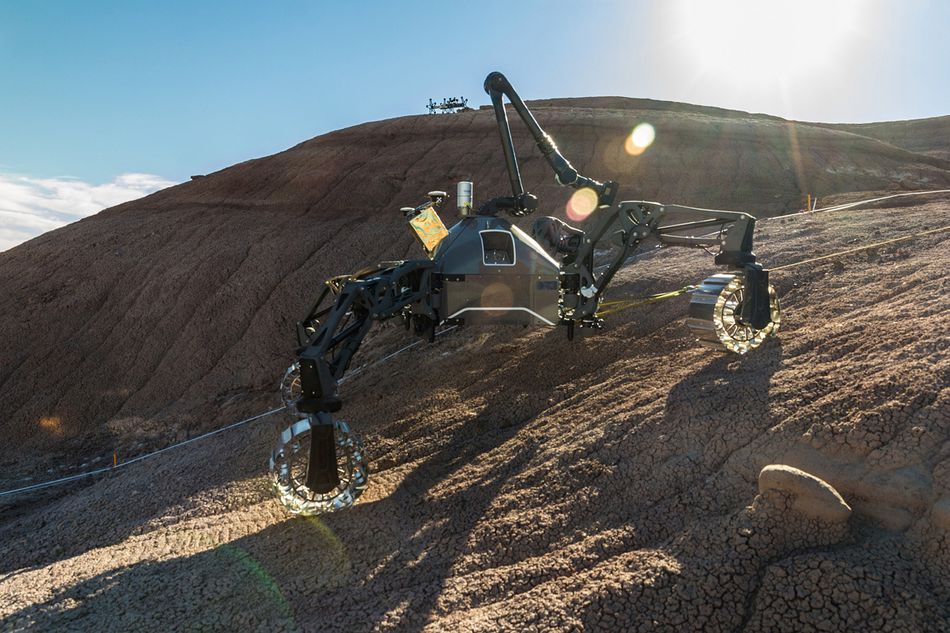 During field tests in the US state of Utah, the space exploration systems SherpaTT (front) and Coyote III (back) are put to test in a Mars-like terrain. © DFKI GmbH, Foto: Florian Cordes

In the mission, an autonomous exploration robot will rappel into a cave and be lifted up again. The scenario envisions three autonomous rovers – SherpaTT and Coyote of the DFKI as well as robot LUVMI of Space Applications Service in Belgium – that jointly explore the entrance of a cave and collect and share preliminary information by a sensor cube that LUVMI throws into the so-called “skylight”. Using this data, the systems determine a suitable point of entrance at which the robust rover SherpaTT rappels the compact Coyote into the cave using a wire rope hoist. After reaching the ground, the agile robot undocks from the rappel and docking mechanism, explores the cave and eventually returns to the docking station in order to transmit the data and be lifted up again by SherpaTT.

The field test for the validation of the SRC technologies is scheduled for early 2023. Until then, the task is to define the mission details and requirements, implement the technologies on the systems and consider possible safety and security questions. Simultaneously, the company GMV Aerospace and Defence SA and the Fundación Santa Bárbara will conduct another field test in a mine in Northern Spain, in which the same technologies are tested for the exploration of shafts. In this field test, a rover and a drone of Spanish company GMV are put to use. Further partners of the project CoRob-X, which is funded over a period of 24 months under grant number 101004130 with a total of 3.006.912,50 euros, are the Laboratoire Atmostphères, Milieux Observations Spatiales (LATMOS) and Magellium SAS from France, the University of Malaga, Sintef AS from Norway and Airbus Defence and Space GmbH from Germany.

The Praying Mantis As A Model - Six-Legged Robot To Build Infrastructure On...

Quantum AI For The Auto Industry

Secure And Sovereign: DFKI And Partners Work On Trustworthy Open Chips For ...

Engineers are developing the crucial hardware needed for a series of daring space missions that will be carried out in the coming decade.

Carnegie Mellon University’s Iris rover is bolted in and ready for its journey to the moon.

How two new technologies will help Perseverance, NASA’s most sophisticated rover yet, touch down onto the surface of Mars this month.