Since the 2003 discovery of the single-atom-thick carbon material known as graphene, there has been significant interest in other types of 2-D materials as well.

These materials could be stacked together like Lego bricks to form a range of devices with different functions, including operating as semiconductors. In this way, they could be used to create ultra-thin, flexible, transparent and wearable electronic devices.

However, separating a bulk crystal material into 2-D flakes for use in electronics has proven difficult to do on a commercial scale.

The existing process, in which individual flakes are split off from the bulk crystals by repeatedly stamping the crystals onto an adhesive tape, is unreliable and time-consuming, requiring many hours to harvest enough material and form a device.

Now researchers in the Department of Mechanical Engineering at MIT have developed a technique to harvest 2-inch diameter wafers of 2-D material within just a few minutes. They can then be stacked together to form an electronic device within an hour.

The technique, which they describe in a paper published in the journal Science, could open up the possibility of commercializing electronic devices based on a variety of 2-D materials, according to Jeehwan Kim, an associate professor in the Department of Mechanical Engineering, who led the research.

The paper’s co-first authors were Sanghoon Bae, who was involved in flexible device fabrication, and Jaewoo Shim, who worked on the stacking of the 2-D material monolayers. Both are postdocs in Kim’s group.

The paper’s co-authors also included students and postdocs from within Kim’s group, as well as collaborators at Georgia Tech, the University of Texas, Yonsei University in South Korea, and the University of Virginia. Sang-Hoon Bae, Jaewoo Shim, Wei Kong, and Doyoon Lee in Kim’s research group equally contributed to this work.

“We have shown that we can do monolayer-by-monolayer isolation of 2-D materials at the wafer scale,” Kim says. “Secondly, we have demonstrated a way to easily stack up these wafer-scale monolayers of 2-D material.”

The researchers first grew a thick stack of 2-D material on top of a sapphire wafer. They then applied a 600-nanometer-thick nickel film to the top of the stack.

Since 2-D materials adhere much more strongly to nickel than to sapphire, lifting off this film allowed the researchers to separate the entire stack from the wafer.

What’s more, the adhesion between the nickel and the individual layers of 2-D material is also greater than that between each of the layers themselves.

As a result, when a second nickel film was then added to the bottom of the stack, the researchers were able to peel off individual, single-atom thick monolayers of 2-D material.

That is because peeling off the first nickel film generates cracks in the material that propagate right through to the bottom of the stack, Kim says.

Once the first monolayer collected by the nickel film has been transferred to a substrate, the process can be repeated for each layer. 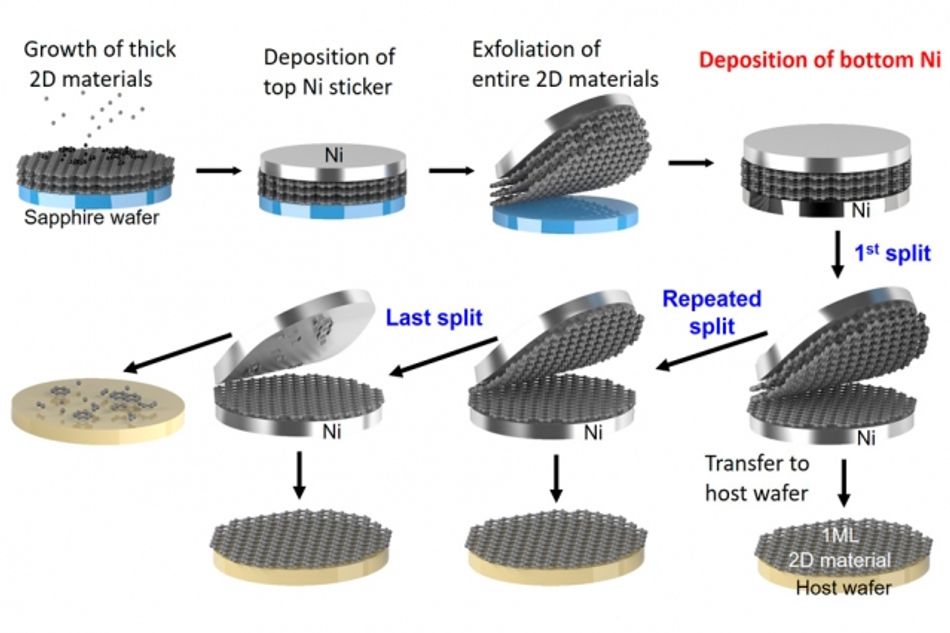 Schematic illustration explaining the atomic scale manipulation of 2-D materials, in which thick wafer-scale 2-D materials are split into individual monolayers. Courtesy of the researchers

“We use very simple mechanics, and by using this controlled crack propagation concept we are able to isolate monolayer 2-D material at the wafer scale,” he says.

The universal technique can be used with a range of different 2-D materials, including hexagonal boron nitride, tungsten disulfide, and molybdenum disulfide.

In this way it can be used to produce different types of monolayer 2-D materials, such as semiconductors, metals, and insulators, which can then be stacked together to form the 2-D heterostructures needed for an electronic device.

“If you fabricate electronic and photonic devices using 2-D materials, the devices will be just a few monolayers thick,” Kim says. “They will be extremely flexible, and can be stamped on to anything,” he says.

The process is fast and low-cost, making it suitable for commercial operations, he adds.

The researchers have also demonstrated the technique by successfully fabricating arrays of field-effect transistors at the wafer scale, with a thickness of just a few atoms.

“The work has a lot of potential to bring 2-D materials and their heterostructures towards real-world applications,” says Philip Kim, a professor of physics at Harvard University, who was not involved in the research.

The researchers are now planning to apply the technique to develop a range of electronic devices, including a nonvolatile memory array and flexible devices that can be worn on the skin.

They are also interested in applying the technique to develop devices for use in the “internet of things,” Kim says.

“All you need to do is grow these thick 2-D materials, then isolate them in monolayers and stack them up. So it is extremely cheap — much cheaper than the existing semiconductor process. This means it will bring laboratory-level 2-D materials into manufacturing for commercialization,” Kim says.

“That makes it perfect for IoT networks, because if you were to use conventional semiconductors for the sensing systems it would be expensive.”

Breaking (and Restoring) Graphene's Symmetry in a Twistable Electronics Device

Soft composites that use droplets of gallium-based liquid metal have the potential for transformative impact in multifunctional material engineering.

Breaking (and Restoring) Graphene's Symmetry in a Twistable Electronics Device

Columbia researchers invent a new way to tune the properties of 2D materials by adjusting the twist angle between them; technology enables the development of nanoelectromechanical sensors with applications in astronomy, medicine, search and rescue, and more.