Robotic hands are a physical extension of a surgeon’s hands. | Image: Getty Images

In a new study published in the January issue of the journal Scientific Reports, researchers at Texas A&M University show that by delivering small, yet perceptible buzzes of electrical currents to fingertips, users can be given an accurate perception of distance to contact. This insight enabled users to control their robotic fingers precisely enough to gently land on fragile surfaces.

The researchers said that this technique might be an effective way to help surgeons reduce inadvertent injuries during robot-assisted operative procedures.

“One of the challenges with robotic fingers is ensuring that they can be controlled precisely enough to softly land on biological tissue,” said Dr. Hangue Park, assistant professor in the Department of Electrical and Computer Engineering. “With our design, surgeons will be able to get an intuitive sense of how far their robotic fingers are from contact, information they can then use to touch fragile structures with just the right amount of force.”

Robot-assisted surgical systems, also known as telerobotic surgical systems, are physical extensions of a surgeon. By controlling robotic fingers with movements of their own fingers, surgeons can perform intricate procedures remotely, thus expanding the number of patients that they can provide medical attention. Also, the tiny size of the robotic fingers means that surgeries are possible with much smaller incisions since surgeons need not make large cuts to accommodate their hands into the patient’s body for operations.

However, Park noted that just visual information is not enough to guide fine finger movements, which is very critical when the fingers are in the close vicinity of the brain or other delicate tissue. 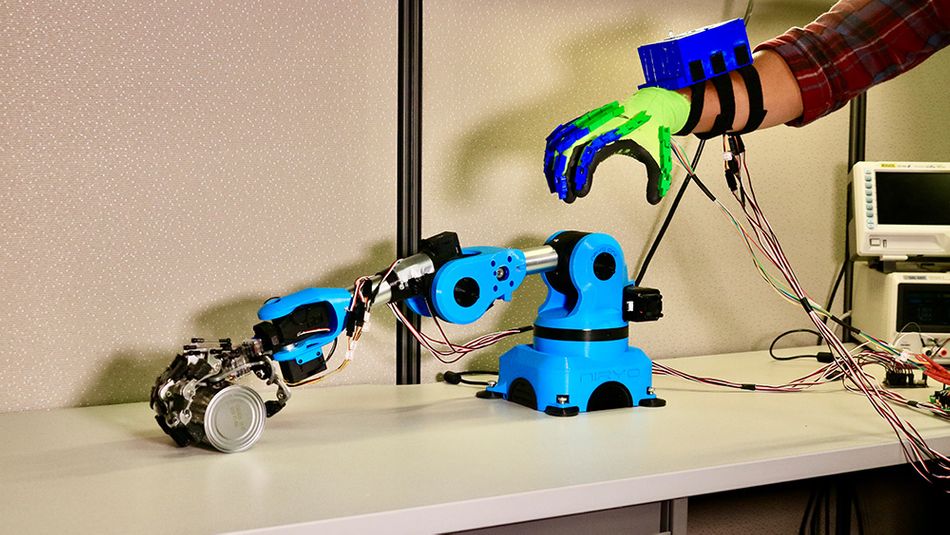 Stimulation electrodes on the glove delivers distance information so that a user can touch a test object with just the right amount of force. | Image: Dr. Hangue Park

To address this problem, Park and his team came up with an alternate way to deliver distance information that is independent of visual feedback. By passing different frequencies of electrical currents onto fingertips via gloves fitted with stimulation probes, the researchers were able to train users to associate the frequency of current pulses with distance, that is, increasing current frequencies indicated the closing distance from a test object. They then compared if users receiving current stimulation along with visual information about closing distance on their monitors did better at estimating proximity than those who received visual information alone.

Park and his team also tailored their technology according to the user’s sensitivity to electrical current frequencies. In other words, if a user was sensitive to a wider range of current frequencies, the distance information was delivered with smaller steps of increasing currents to maximize the accuracy of proximity estimation.

The researchers found that users receiving electrical pulses were more aware of the proximity to underlying surfaces and could hence lower their force of contact by around 70%, performing much better than the other group. Overall, they observed that proximity information delivered through mild electric pulses was about three times more effective than the visual information alone.

Park said that their novel approach has the potential to significantly increase maneuverability during surgery while minimizing risks of unintended tissue damage. He also said their technique would add little to the existing mental load of surgeons during operative procedures.

“Our goal was to come up with a solution that would improve the accuracy in proximity estimation without increasing the burden of active thinking needed for this task,” he said. “When our technique is ready for use in surgical settings, physicians will be able to intuitively know how far their robotic fingers are from underlying structures, which means that they can keep their active focus on optimizing the surgical outcome of their patients.”

Other contributors to the research include Ziqi Zhao, Minku Yeo and Stefan Manoharan from the Texas A&M Department of Electrical and Computer Engineering, and Dr. Seok Chang Ryu from Ewha Womans University, South Korea.

Machine learning can now reduce worry about nanoparticles in food

Surgical robot with DLR technology on the market

Operations with robotic assistance systems are no longer a rarity. The surgeon sits at a console, the robotic arms execute his commands precisely, safely and gently for the patient.

Now it is possible to teleoperate individual and combined control of any number of robotic arms. Thanks to the designed control architecture, the human operator can intuitively create robot groups to control them together.