Contemporary physics offers us many opportunities to control the properties of matter. By changing a substance’s composition or external conditions, such as pressure, temperature, or acidity, we can significantly influence the properties of this material.

“This can be done both chemically, by mixing different substances, and physically,” explains Ivan Iorsh, a professor at ITMO’s Faculty of Physics and Engineering. “For instance, metals enter superconductive states when cooled down rapidly.”

Similar transformations can be done with the help of light. Both by simply subjecting the matter to high-intensity light beams and by applying a slightly more complicated method – using the so-called ultrastrong coupling of an atom and a photon. As a result of this ultrastrong interaction, a polariton is created. It is a particle that has the properties of both light and matter.

“It’s a relatively new way of changing phases of matter,” says Ivan Iorsh. “Some suppose this interaction is superconductive. At the same time, it can change the matter’s magnetic properties creating ferroelectrics. This is the alchemy of our time, if you will, but one that works through interaction with light.”

To produce a polariton, we need to create the conditions necessary for a sufficiently intensive interaction between atoms of a substance and photons. To achieve that, we would generally have to put the atoms into an optical resonator, which lets the light in but doesn’t let the photons out easily. They are repeatedly reflected from the inner walls of the resonator, constantly interacting with the atoms inside.

“Atoms have their ground states and excited states, which they enter when given a certain amount of energy,” expounds Ivan Iorsh. “In photonics, we use light as energy. This process of atoms interacting with light can be a rather long one. If before this interaction the photon’s energy was equal to the energy needed to excite the atom, a strong coupling effect can arise, meaning that the atom and photon create a polariton. In such a case, the energy of the resulting particle equals the energy of the photon, give or take a certain amount. Thus, some polaritons have more energy (upper polaritons) and some have less (lower polaritons).” 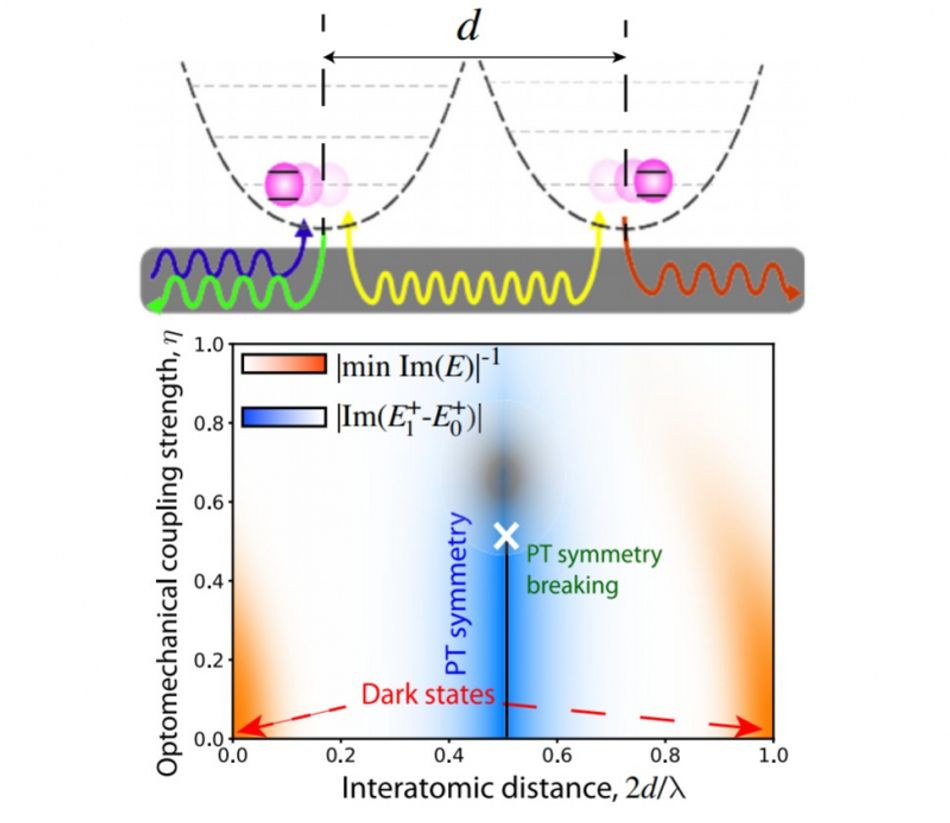 An illustration from the article. Credit: journals.aps.org

This limitation of polaritons possessing the same energy as photons give or take a specific amount is very important. As this difference depends on the strength of interaction between the light and the substance, when the interaction is strong enough the energy of lower polariton can be lower than the ground state, in which there is no photon in the resonator. It means that the material reaches its lowest energy state not in the ground state of an atom but in a polariton, a particle that is both light and matter. This is what allows us to change the properties of matter, control its conductivity, its magnetic and other properties.

“In such a system, you don’t have to constantly subject substances to light to change their properties – you only need to put them inside the resonator once,” continues Ivan Iorsh. “It is useful because ordinarily the changed properties only remain when the light is on, and go back to their original states when it’s turned off.”

Bathing in a stream of photons 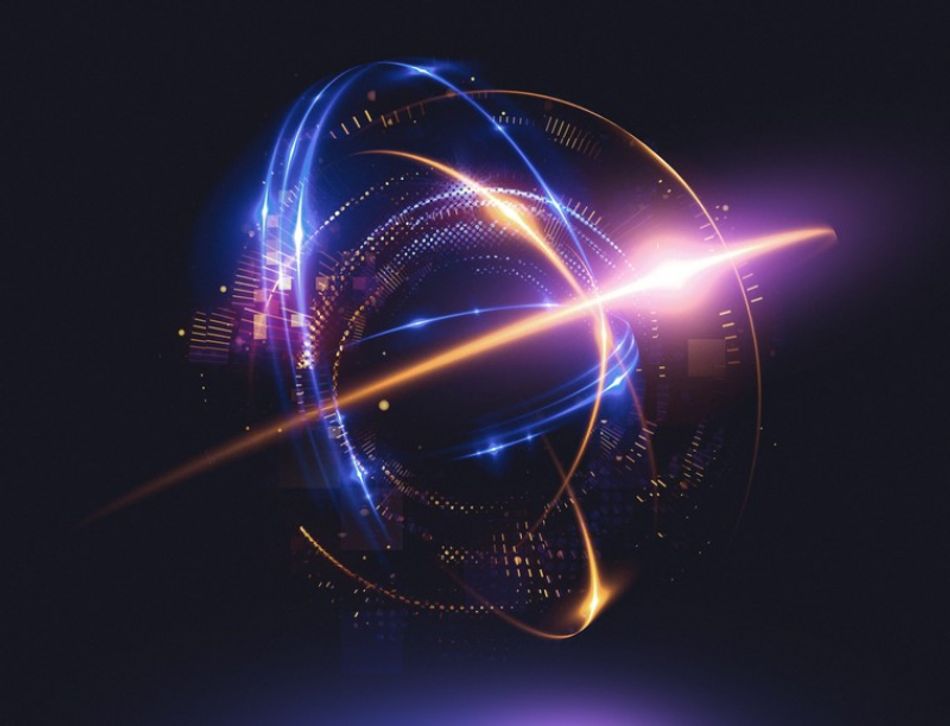 However, placing atoms in optical resonators is not the only way to acquire polaritons. It was previously theoretically predicted that such particles can form from a group of atoms placed above a waveguide – an optical channel with photons streaming inside. ITMO University researchers have proven this as part of a project supported by the Russian Science Foundation.

“We’ve demonstrated that ultrastrong coupling can occur in a system of atoms above a waveguide,” comments Ivan Iorsh. “In this case, the waveguide serves as a resonator – meaning that we have photons in the waveguide instead of photons in the resonator. It is important that there is not just one atom, but an array of them, and they “communicate” by exchanging these waveguide photons.” 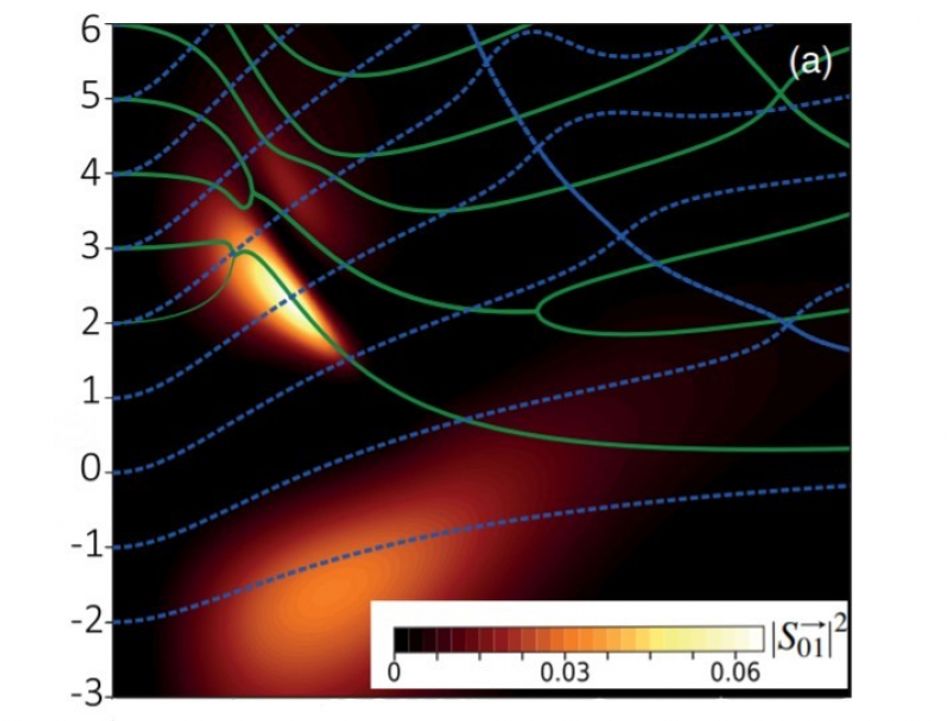 An illustration from the article. Credit: journals.aps.org

Using this state we can control the light, prompting its non-classic states. For instance, we can produce single or coupled photons and not a large stream of them as found in a typical laser.

“There is one more thing – a very strong bond exists between the photon subsystem and the mechanical degrees of freedom, the way atoms move,” adds Ivan Iorsh. “The movement of atoms is quantized, it is also non-classical and can be described with a discrete number of quantum variables. It turns out that you can record the information carried by a photon onto a quantum movement and then read it. This is something like quantum memory.”