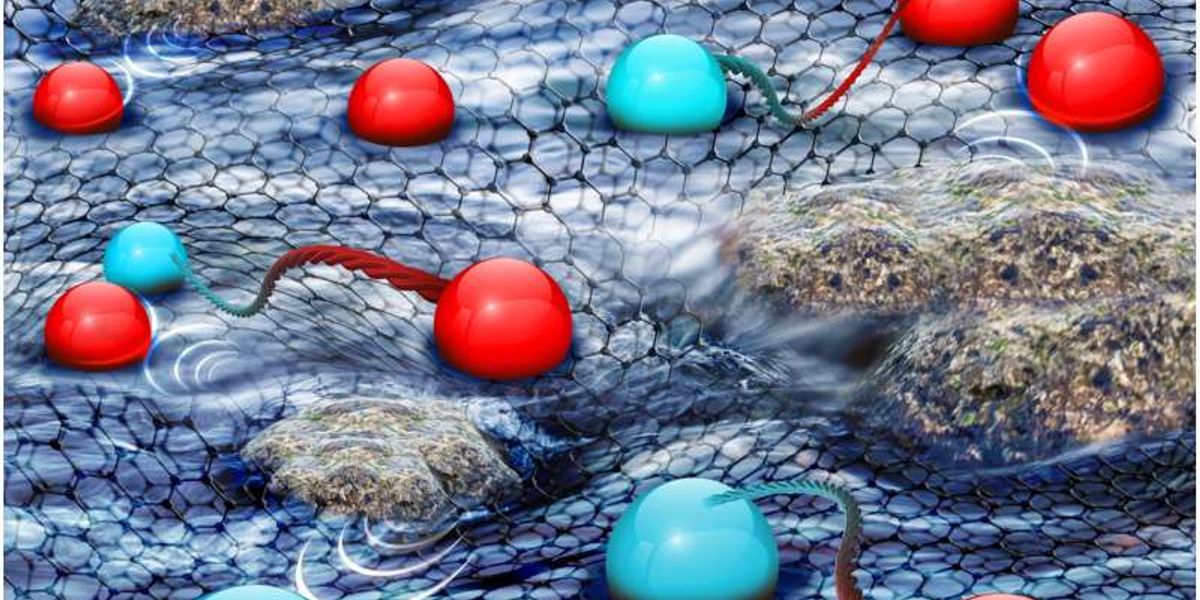 In a novel semiconductor, electrons can flow like water around obstacles. This hydrodynamic behavior could yield more efficient devices. Credit: Rina Goh/National University of Singapore

A team at Columbia University and the National University of Singapore finds a simple new way to describe the water-like movement of electrons in a novel type of semiconductor, which could pave the way for more efficient electronics.

You don’t normally want to mix electricity and water, but electricity behaving like water has the potential to improve electronic devices. Recent work from the groups of engineer James Hone at Columbia and theoretical physicist Shaffique Adam at the National University of Singapore and Yale-NUS builds new understanding of this unusual hydrodynamic behavior that changes some old assumptions about the physics of metals. The study was published on April 15 in the journal Science Advances.

In the work, the team studied the behavior of a novel semiconductor in which negatively charged electrons and positively charged “holes” simultaneously carry current. They found that this current can be described with just two “hydrodynamic” equations: one describing how the electrons and holes slide against each other, and a second for how all of the charges move together through the atomic lattice of the material.

“Simple formulas usually mean simple physics,” Hone said, who was astonished when Adam’s postdoc, Derek Ho, built the new model, which challenges assumptions many physicists learn about metals early in their education. “We were all taught that in a normal metal, all you really need to know is how an electron bounces off various types of imperfections,” Hone said. “In this system, the basic models we learned about in our first courses just don’t apply.”

In metal wires carrying an electrical current, there are many moving electrons that largely ignore each other, like riders on a crowded subway. As the electrons move, they inevitably run into either physical defects in the material carrying them or vibrations that cause them to scatter. Current slows down, and energy is lost. But, in materials that have smaller numbers of electrons, those electrons actually interact strongly with each other and will flow together, like water through a pipe. They still encounter those same imperfections, but their behavior is completely different: instead of thinking about individual electrons randomly scattering, you now have to treat the entire set of electrons (and holes) together, Hone said.

To experimentally test their simple new model of hydrodynamic conductivity, the team studied bilayer graphene—a material made from two atom-thin sheets of carbon. Hone’s PhD student Cheng Tan measured electrical conductivity from room temperature down to near absolute zero as he varied the density of electrons and holes. Tan and Ho found an excellent match between the model and their results. “It’s striking that experimental data agrees so much better with hydrodynamic theory than old ‘standard theory’ about conductivity,” Ho said.

The model worked when the material was tuned in a way that allows conductivity to be turned on and off, and the hydrodynamic behavior was prominent even at room temperature. “It is really remarkable that bilayer graphene has been studied for over 15 years, but until now we did not correctly understand its room-temperature conductivity,” said Hone, who is also Wang Fong-Jen Professor and chair of the Department of Mechanical Engineering at Columbia Engineering.

On a more fundamental level, the team verified that the sliding motion between electrons and holes isn’t specific to graphene, said Adam, associate professor from the Department of Materials Science and Engineering at the National University of Singapore and the Division of Science at Yale-NUS College. Because this relative motion is universal, researchers should be able to find it in other materials—especially as improving fabrication techniques continues to yield cleaner and cleaner samples, which the Hone Lab has focused on developing over the past decade. In the future, researchers might also design specific geometries to further improve performance of devices built to take advantage of this unique water-like collective behavior.

PMOS VS NMOS: Focus on Two Main Forms of MOSFET

Science Communications Manager for the Quantum Initiative at Columbia University

A household microwave oven modified by a Cornell Engineering professor is helping to cook up the next generation of cellphones, computers and other electronics after the invention was shown to overcome a major challenge faced by the semiconductor industry.

An oligomeric [8]annulene-based material has been shown to be suitable for creating single-molecule components including logic elements, switches, and gates — and could be one of the ways Moore's Law is kept marching in the semiconductor industry.

PMOS VS NMOS: Focus on Two Main Forms of MOSFET

NMOS and PMOS are the main forms of MOSFET. This article describes in reasonable detail, what PMOS and NMOS are. It also describes the types of PMOS and NMOS transistors, the body effect, construction and physical operation, and their applications.