The cane, incorporating sensing and way-finding approaches from robotics and self-driving vehicles, could reshape life for people who are blind or sight impaired.

Using tools from autonomous vehicles, the research team has built the augmented cane, which helps people detect and identify obstacles, move easily around those objects, and follow routes both indoors and out.

The augmented cane is not the first smart cane. Research sensor canes can be heavy and expensive — weighing up to 50 pounds with a cost of around $6,000. Currently available sensor canes are technologically limited, only detecting objects right in front of the user. The augmented cane sports cutting-edge sensors, weighs only 3 pounds, can be built at home from off-the-shelf parts and free, open-source software, and costs $400.

The researchers hope their device will be an affordable and useful option for the more than 250 million people with impaired vision worldwide.

“We wanted something more user-friendly than just a white cane with sensors,” says Patrick Slade, a graduate research assistant in the Stanford Intelligent Systems Laboratory and first author of a paper published in the journal Science Robotics describing the augmented cane. “Something that cannot only tell you there’s an object in your way, but tell you what that object is and then help you navigate around it.” The paper comes with a downloadable parts list and DIY solder-at-home instructions. 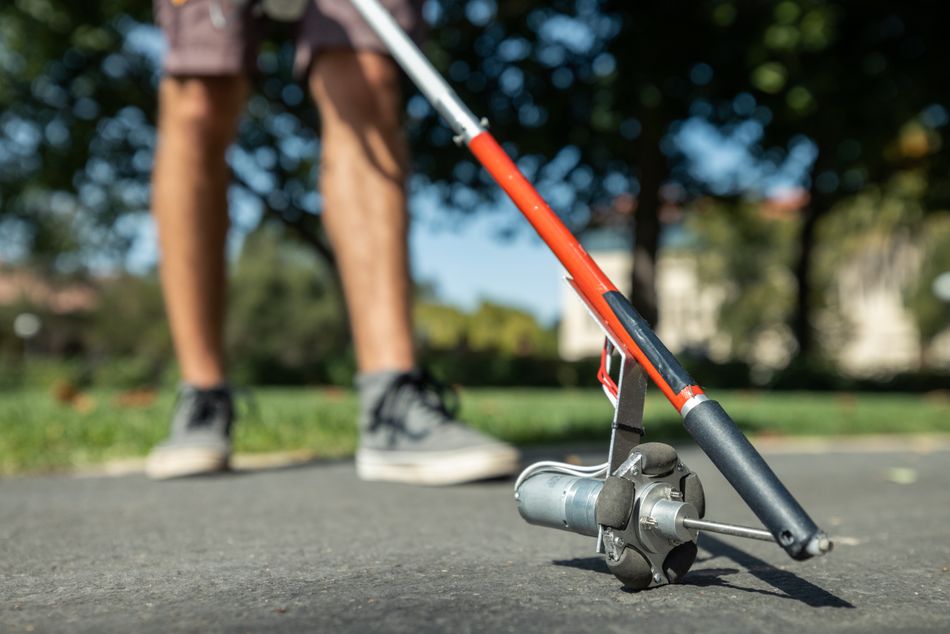 The cane uses a LIDAR sensor to measure distance to nearby obstacles and then directs users around those areas. | Andrew Brodhead

The augmented cane is equipped with a LIDAR sensor. LIDAR is the laser-based technology used in some self-driving cars and aircraft that measures the distance to nearby obstacles. The cane has additional sensors including GPS, accelerometers, magnetometers, and gyroscopes, like those on a smartphone, that monitor the user’s position, speed, direction, and so forth. The cane makes decisions using artificial intelligence-based way finding and robotics algorithms like simultaneous localization and mapping (SLAM) and visual servoing — steering the user toward an object in an image.

“Our lab is based out of the Department of Aeronautics and Astronautics, and it has been thrilling to take some of the concepts we have been exploring and apply them to assist people with blindness,” says Mykel Kochenderfer, an associate professor of aeronautics and astronautics and an expert in aircraft collision-avoidance systems, who is senior author on the study.

Mounted at the tip of the cane is the pièce de résistance — a motorized, omnidirectional wheel that maintains contact with the ground. This wheel leads the user with impaired vision by gently tugging and nudging, left and right, around impediments. Equipped with built-in GPS and mapping capabilities, the augmented cane can even guide its user to precise locations — like a favorite store in the mall or a local coffee shop.

In real-world tests with users that volunteered through the Palo Alto Vista Center for the Blind and Visually Impaired, the researchers put the augmented cane in the hands of people with visual impairments as well as sighted people who were blindfolded. They were then asked to complete everyday navigation challenges — walking hallways, avoiding obstacles, and traversing outdoor waypoints.

“We want the humans to be in control but provide them with the right level of gentle guidance to get them where they want to go as safely and efficiently as possible,” Kochenderfer says.

In that regard, the augmented cane excelled. It increased the walking speed for participants with impaired vision by roughly 20 percent over the white cane alone. For sighted people wearing blindfolds, the results were more impressive, increasing their speed by more than a third. An increased walking speed is related to better quality of life, Slade notes, so the hope is that the device could improve the quality of life of its users.

The scholars are open-sourcing every aspect of the project. “We wanted to optimize this project for ease of replication and cost. Anyone can go and download all the code, bill of materials, and electronic schematics, all for free,” Kochenderfer says.

“Solder it up at home. Run our code. It’s pretty cool,” Slade adds.

But Kochenderfer notes the cane is still a research prototype. “A lot of significant engineering and experiments are necessary before it is ready for everyday use,” he says, adding that he and the team would welcome partners in industry who could streamline the design and scale up production to make the augmented cane even more affordable.

Next steps for the team include refinements to their prototype and developing a model that uses an everyday smartphone as the processor, an advance that could improve functionality, broaden access to the technology, and further drive down costs.

Watch the Augmented Cane in Action:

Additional authors include Arjun Tambe in the Department of Mechanical Engineering at Stanford.

Pretreatment of palladium with steam could improve methane combustion

Researchers have developed a chip that is powered wirelessly and can be surgically implanted to read neural signals and stimulate the brain with both light and electrical current. The technology has been demonstrated successfully in rats and is designed for use as a research tool.

Researchers have successfully demonstrated how an electronic device implanted directly into the brain can detect, stop and even prevent epileptic seizures.