Imagine you’re driving your Tesla, or an equivalent electric car, down the highway. Your battery is running low. Sure, you could pull off at the next exit and spend time, and energy, searching for a recharging station. Or you could simply change lanes and drive over special charging strips embedded in the road.

That’s the vision of Khurram Afridi, associate professor of electrical and computer engineering in the College of Engineering. He’s pioneering an innovative approach for the wireless charging of electric vehicles, autonomous forklifts and other mobile machines, while they remain in motion. 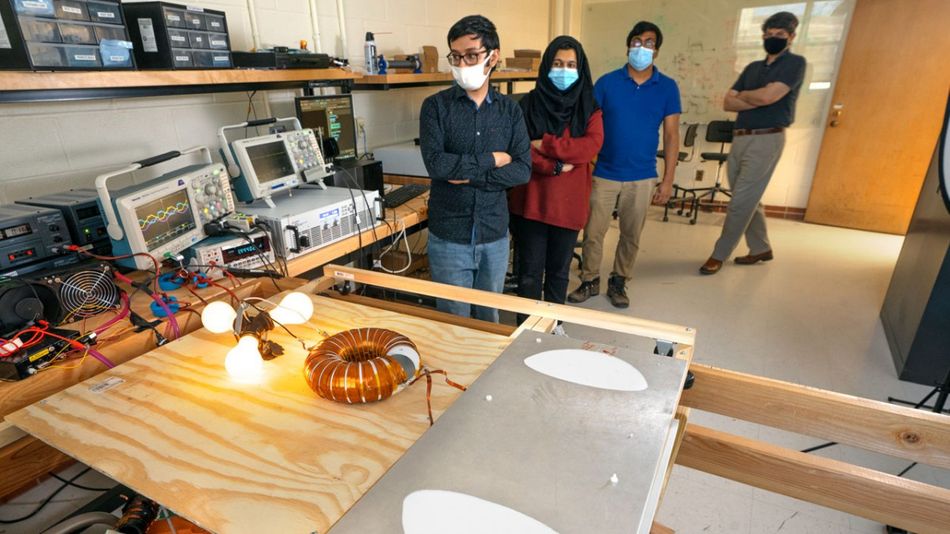 Doctoral students, from left, Sounak Maji and Maida Farooq and postdoctoral researcher Sreyam Sinha work to develop a wireless power transfer system in the lab of Khurram Afridi, associate professor of electrical and computer engineering, far right. John Munson/Cornell University The technology would not only save time for drivers and improve productivity in warehouses. It would also literally pave the way for more sustainable transit.

“There are a lot of infrastructure questions that get asked when you say, ‘OK, we’re going to enable electric vehicles.’” Afridi said. “How does that society function? If every vehicle in the country was electric, you would need a lot of outlets to plug them in. We don’t have that kind of power available in our homes to be able to charge them very fast.”

The origins of Afridi’s project go back more than 100 years to the original Tesla – Nikola, the Serbian-American inventor – who amazed audiences in the 1890s by using alternating electric fields to illuminate unplugged fluorescent lamps. Energized by Tesla’s ideas, French scientists plotted their own version of wireless power that would transfer energy via alternating magnetic fields, rather than electric fields, to power trams. They soon found their approach wasn’t practical, and interest in the technology fizzled.

Over the last several decades, the idea of wirelessly powering vehicles in motion has been revisited by a variety of groups, from California’s efforts to test roadway-powered electric vehicles in the 1980s as part of its Partners for Advanced Transit and Highways (PATH) program, to New Zealand researchers developing power-delivery technologies for conveyor systems in the 1990s. However, even with scientific advances in power and electronics technologies, attempts to commercialize this method for roadway-powered vehicles have proved difficult and costly.

The most popular proposal for wireless vehicle charging has focused on harnessing the power of alternating magnetic fields, because these fields can be generated using readily available electric currents. The delivered power increases if the fields are changing rapidly, so recent work – enabled by improved technology – has focused on tens of kilohertz frequencies compared to the few hundred hertz used by the PATH program.

The problem, however, remains that magnetic fields are unwieldy because they form complete loops and their direction must be guided to keep them out of certain regions. That’s because high-strength alternating magnetic fields can harm passengers in the car or heat up rebars in the road, and so need to be impeded at these points. The material that guides the fields – ferrite – is brittle, bulky, expensive and loses a lot of energy when the magnetic fields are changing quickly.

A team led by Khurram Afridi, associate professor of electrical and computer engineering, is pioneering an innovative approach for the wireless charging of electric vehicles, autonomous forklifts and other mobile machines, while they remain in motion. John Munson/Cornell University

While bulky and expensive wireless chargers could be acceptable for stationary charging, deploying magnetic field-based systems on a large scale for recharging moving vehicles is cost prohibitive.

Afridi discovered a unique solution to these challenges by looking far beyond magnetic fields and kilohertz: to outer space.

“Wireless power transfer is based on the same underlying physics used to send messages through radio waves to spacecraft in deep space, things like Voyager,” Afridi said. “Except now we are sending much more energy across much shorter distances, to moving vehicles.”

As an undergraduate at the California Institute of Technology, Afridi had a passionate interest in the radio frequency electronics used for deep space communication. At the end of his sophomore year, he worked with NASA’s Jet Propulsion Laboratory on designing the 8- and 32-GHz transmitter of the SURFSAT 1 satellite, which launched in 1995 as a precursor to the Saturn-bound Cassini satellite two years later.

In graduate school at the Massachusetts Institute of Technology, Afridi switched to studying power electronics, which operate at much lower frequencies by a difference of six orders of magnitude but handle much higher power levels. In effect, Afridi gave up his gigahertz for kilohertz. But he always wondered about pushing power electronics to their utmost frequencies.

“What really drives me at the fundamental level,” he said, “is taking these two very different communities – high-frequency electronics and high-power electronics – who have never talked to one another, who don’t speak the same language, who essentially solve problems very differently, and merge them together to essentially create an entirely new field and also enable brand new applications.”

From deep space to highways and warehouses

In 2014, Afridi began exploring the potential of reviving Nikola Tesla’s original parlor trick of manipulating electric fields, but at much higher frequency and power.

In the system Afridi’s team has designed, two insulated metal plates on the ground, connected to a power line through a matching network and a high-frequency inverter, create oscillating electric fields that attract and repel charges in a pair of matching metal plates attached to the underside of a vehicle. This drives a high-frequency current through a circuit on the vehicle, which rectifies it. The rectified current then charges the battery.

One enormous advantage of electric fields is they have a more linear, directed nature compared with the looping arcs of magnetic fields. Hence, they do not require flux-guiding materials, such as ferrite, and can operate at much higher frequencies. The main challenge is that electric fields generated by readily available voltages are quite weak. Afridi’s team compensates by boosting the voltage and operating the system at very high frequencies to achieve large levels of power transfer.

“The latest magnetic field systems developed for electric vehicle charging operate at 85 kilohertz. The electric field system that we are developing in our lab works at 13.56 megahertz. So it’s running almost 200 times faster, which partly compensates for the five orders of magnitude deficit it needs to overcome,” Afridi said. “It also turns out that you can deal with a much higher voltage more easily than a higher current, which helps further bridge the difference in power transfer capability.”

The team’s ferrite-free system promises to be smaller, lighter, less expensive and easier to embed in the roadway. However, the system is not easy to develop.

The wireless charging technology harnesses the power of electric fields, but boosts the voltage and operates at high frequencies to achieve large levels of power transfer. John Munson/Cornell University

In order to overcome a number of technological hurdles, Afridi’s team – including fellow Brandon Regensburger, M.S. ’19, Ph.D. ’20, postdoctoral researcher Sreyam Sinha, Ph.D. ’20, and doctoral student Sounak Maji – partnered with several collaborators at Cornell. Francisco Monticone, assistant professor of electrical and computer engineering, helped the team develop charging plates based on engineered metamaterials to better focus their electric fields. Debdeep Jena and Huili Grace Xing, both professors in electrical and computer engineering and in materials science and engineering, are also collaborating to develop wide bandgap materials and devices that can handle the high voltage and operate at high frequencies.

The team’s most notable innovation is the active variable reactance (AVR) rectifier, which allows a vehicle to get full power when passing over the charging plates even if the pairs of plates – which would be laid out roughly every few meters on the road – are not completely aligned. The AVR also helps deliver power to larger vehicles that have increased clearance between their undercarriages and the ground.

If it’s tough to create a wireless charging system, it’ll be just as tough to implement it on a mass scale.

One approach, Afridi believes, would be to electrify high-traffic roadways first, especially to support large, long-haul trucks. Another option would be to focus on cities, installing charging strips at stop signs and traffic lights, so drivers could recharge while they wait.

The technology could also be employed in manufacturing warehouses and fulfillment centers so autonomous robots could work around the clock. Afridi is currently working with Toyota Material Handling North America to develop in-motion charging for forklifts and material-handling mobile robots. He is also part of a National Science Foundation-funded international research center that advances sustainable, electrified transportation.

“Wireless charging may sound crazy in the beginning,” he said. “But if we really had that technology, it would make a lot of sense.”

As battery makers race to keep up with demand, a quick and inexpensive step can save money and time in development.

Battery power from electric vehicles to the grid could open a fast lane to a net-zero future.