The Boxing Hand Grenade (BHG) is the brainchild of Shrewsbury-based personal trainer and martial arts instructor John Docherty, who developed the handheld device after sustaining a cumulative injury to his hand and wrist.

Faced with a race to be first to market, he turned to Telford-based Protolabs - the world’s fastest digital manufacturer and a pioneer of advanced manufacturing technologies - to produce a prototype through its PolyJet 3D printing service.

“The idea for the BHG came after I used a piece of foam I found on the gym floor to grip in my fist whilst I was sparring with a client,” explained John, whose potential boxing career had to be cut short due to issues with his eyesight.

“It had the effect of improving the structural integrity of the hand and absorbing the impact shock from a punch, so the idea for the Boxing Hand Grenade was born and the response has been fantastic.” 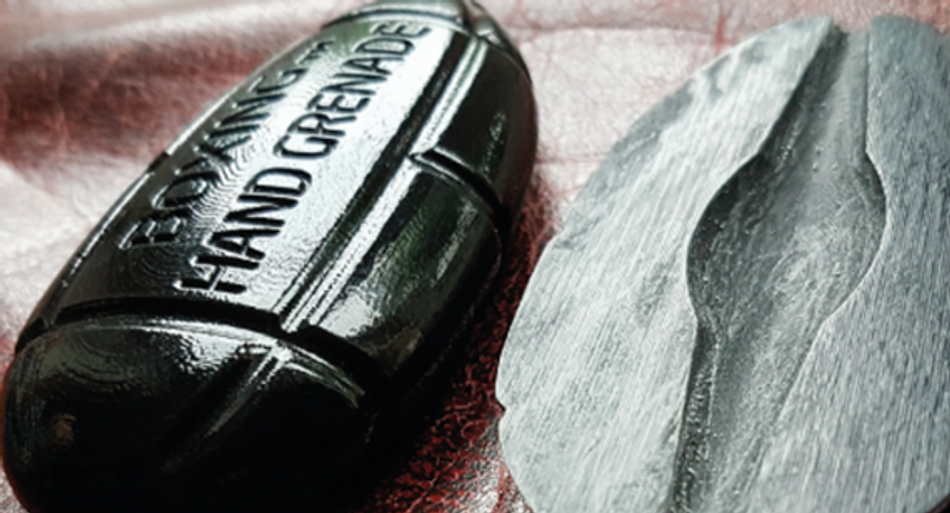 At a glance it is a very simple device, but it has been ergonomically designed to fit the contours of the hand and to be worn under traditional boxing hand wraps inside boxing gloves. There are also a number of key features that are enhanced by the 3D printing production process that sets it apart from similar aids.

Flexion grooves allow for the initial surface impact shock dissipation and micro movement of the striking fist, whilst a future variation of the product will feature a central implosion chamber that allows for the dissipation of the excess impact shock.

John added: “As an entrepreneur with limited resources I needed to find a manufacturing partner that understood what I was trying to create and how important it was to get the product to market before another innovation came to light.

“From the first minute I met engineers from Protolabs, I knew they recognised the urgency, but, equally importantly, identified that a combination of 3D printing for the prototype and injection moulding for production would give me a performance and price point that worked.

“Using the interactive quoting system also enabled me to understand the financial impact of different materials and allowed me to quickly produce a practical and affordable solution for my design.”

Charlotte-Anne Smith, Application Engineer at Protolabs, said: “We were delighted to help John develop this truly innovative project in such a quick time and at a realistic cost. PolyJet 3D printing technology provided outstanding detail, precision and surface smoothness, using a clear digital photopolymer material so that the implosion chamber is visible.”

This is an exciting innovation for boxing and other martial arts and could prevent hundreds, if not thousands, of long-term injuries.

The Boxing Hand Grenade, which retails at £19.99 for a pair, has undergone rigorous testing via professional boxers and professional fight hand wrappers, including former Welsh Boxing Champion Russell Pearce.

Feedback has been overwhelmingly positive and sales have started to come from all four corners of the globe, with John keen to now explore distribution agreements and a number of potential retail deals.

He concluded: “There is nothing else on the market like BHG and we’ve had requests from amateur and pro boxers who recognise the potential benefit of using the fist loaders for their bag and pad work. All the feedback suggests it will soon be a common feature in the professional, amateur and fitness boxing circuits.”

Color, Material, and Function (CMF) are three things to consider when designing a new product. When used appropriately and combined with additive manufacturing, they can help set your product apart from competition when others have brand recognition, lower price, or better technical specs.