Polylactic acid (PLA) and Acrylonitrile Butadiene (ABS) filaments are two of the most commonly used plastics in additive manufacturing due to the low cost of the materials, their relative ease of printing, and of course, their strength and mechanical properties.

In this article, we will be taking a closer look at the two filament types, diving into the FFF printing process as well as PLA vs ABS respective material properties to help you make an informed decision when it comes to choosing 3D printing filaments.

Both ABS and PLA fall into the category of thermoplastics, which are polymers characterized by the ability to change state from molten plastic to solid plastic, and back again when reheated to a particular melting point. This is opposed to thermoset plastics, which cannot be remelted once the plastic has cooled and set.

Thermoplastics are commonly used in 3D printing for a number of reasons. First, the raw materials are relatively low cost. Second, thermoplastics can be easily processed into different feedstock types. For instance, to form pellets or filament from a thermoplastic, the material must simply be melted down and processed using specific tooling to obtain the desired shape. Once it is cooled into the shape of the feedstock, the material is packaged and distributed to customers, who can feed the material into their 3D printer, which will re-melt it and extrude it into the desired final shape.

Being able to change back into a molten state does have one obvious drawback however: thermoplastics tend to melt when they get hot, which means that the working environment for your additively manufactured thermoplastics should be far below the melting point of the plastic. This is the main limitation of using thermoplastics.

ABS filament has been used in industry for decades, having been patented back in 1948. It is commonly injection molded and found in all kinds of products from garden furniture and toys (Lego bricks being most notable), to aerospace and automotive components.

In fact, ABS plastic experienced a boom in the 1970s, due largely to the ongoing oil crisis at the time. The crisis drove up the cost of gasoline in the US, and in order to reduce fuel consumption, automotive manufacturers swapped out the old heavy chromed steel bumpers and other heavy metal ancillary parts and replaced them with electroplated ABS versions, which were significantly lighter. The weight reduction in vehicles gave instant fuel economy gains to customers, and the automotive industry has not given up its love of ABS plastic to this date.

Historically, ABS has been the preferred material of industrial sectors because of its good impact resistance, strength and manufacturability in injection molding. Despite its increased risk of warping when 3D printed, the material still offers these mechanical properties, making it a popular option for many functional applications.

PLA filament is also a mature polymer product, having been developed in the 1920s by Wallace Carothers, who also created Nylon. While PLA was long overlooked for industrial applications compared to other thermoplastics such as ABS, PET, and PVC, it has enjoyed something of a renaissance in recent years, thanks in large part to the proliferation of 3D printing.

While ABS and PLA are comparable in terms of mechanical and thermal properties, one of the main differences between the two polymers is in how they are made and what they are made from. ABS is derived from mineral oil (from fossils); PLA is derived from corn and other starchy plants. Part of PLA’s increasing popularity can be attributed to the fact that it is made from a renewable, bio-based resource, making it a more ecological material than non-renewable ABS. As a result, more and more sectors are exploring the use of PLA, such as the food packaging industry.

While PLA and ABS do bear many similarities in terms of mechanical properties, there are some distinct differences that make each material better suited for certain uses and applications.

To provide a deeper understanding of these differences, we have arranged the properties of a sample PLA filament and ABS filament in the table below for comparison.

Naturally, there are variations in material properties depending on the brand of feedstock, quality control, and other factors, but this table gives a comprehensive overview of what to expect when comparing generic PLA and ABS filaments.

Strength is the amount of force needed to deform a material specimen: it tells us how big of a load a material can handle. In this table, we are specifically looking at ultimate tensile strength, which refers to how much tension the material can withstand before breaking.

As you can see from the table, the PLA sample outperforms ABS in terms of tensile strength in the XY orientation (the strongest orientation). The PLA has a 50% increase in tensile strength compared to the ABS and also has minor gains in elastic modulus (stiffness).

The toughness of a material is defined by its resistance to impact. There are a number of tests to determine these values, but typically we look at the Izod impact strength test which is an ASTM standard test for evaluating the impact strength of materials. Tough materials feature a combination of strength and ductility. A tough material has a greater ability to absorb energy during plastic deformation and will not shatter under impact.

In this category, we can see that ABS is clearly superior to PLA, having roughly 4 times the impact resistance in the notched test and a 50% increase in toughness on the unnotched test. This is to be expected. ABS has long been prized as an impact-resistant material, hence why it is so popular in the manufacture of car bumpers/fenders.

One other benefit worth noting is that ABS has a lower density than PLA, so if you make two parts of the same geometry, the ABS part is going to be lighter.

Typically when users are looking at material data sheets for information about the thermal characteristics of a plastic, they are most interested in the melting point/glass transition temperature (Tg). This is because the value is needed to know the extrusion temperature and the Heat Deflection Temperature (HDT) of the material in question.

Heat Deflection Temperature is a measure of the material’s resistance to distortion under a given load at an elevated temperature. Usually two values for HDT are given, for loads of 0.46 MPa (67 psi) and 1.8MPa (254 psi).  The temperature given shows the temperature at which the sample displaces a distance of 0.25mm for the quoted load.

For anyone curious about what the ASTM D648 test for HDT looks like, the graphic below is a fairly good explanation of the process and apparatus needed to heat the samples during the test. 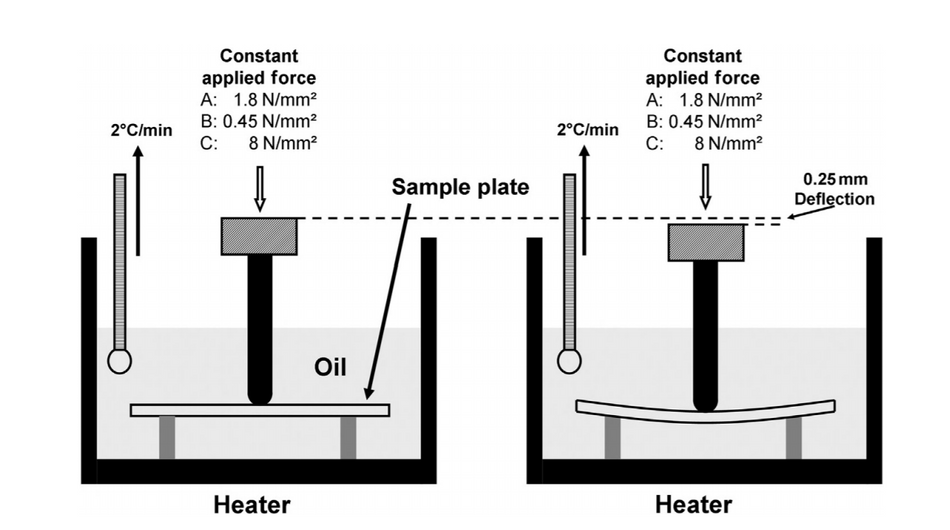 Freshly formed polymers have a tendency to shrink as they cool. This is true of injection molded parts and of 3D printed parts. The percentage for volumetric shrinkage for both processes is about 1.5%.

The difference is that because 3D printing is a layerwise process, warpage can accumulate over time. This is especially true when printing with an unenclosed printer, where cool air currents in the room can cause uneven cooling and uneven shrinkage of a part.

PLA does not warp as much in a typical home printing environment as long as the air in the room is fairly still. Sudden drafts from open doors, windows, or fans can cause larger parts to warp right off the bed, resulting in a failed print.

There are two main solutions in terms of managing the thermal environment to reduce the risk of warping for PLA and ABS:

Aside from managing your thermal environment, warping can be mitigated by improving bed adhesion with the use of brims and rafts in your slicer program. Essentially, these help to keep the part anchored to the bed while it cools. 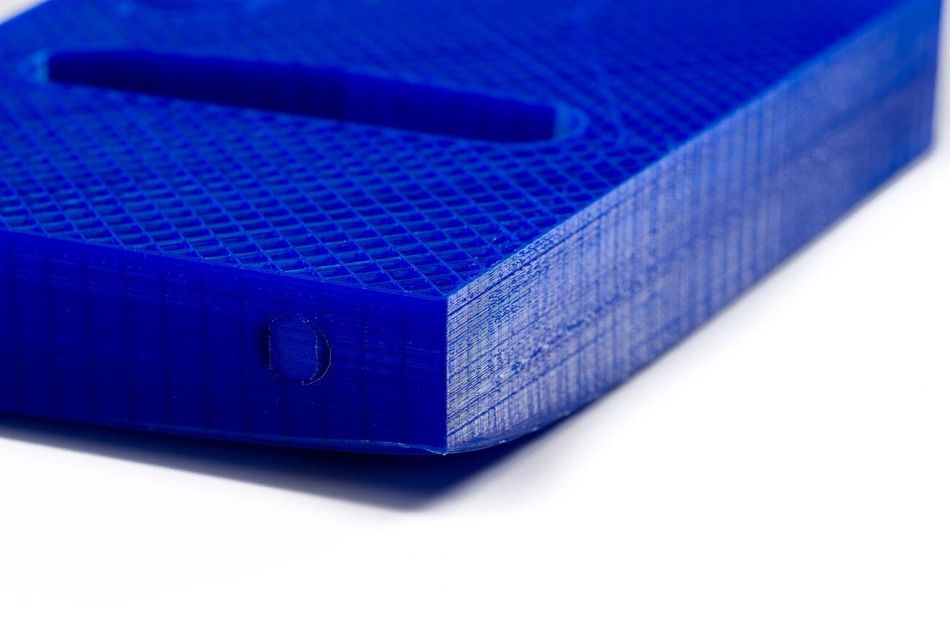 Simplify3D’s software is used by millions of people around the world, enabling them to slice their models and generate G-code for their 3D printers, so we trust that they know a thing or two about printer settings!

Note that the bed temperature for ABS is higher than what is achievable in most off-the-shelf Prusa-style 3D printers, so to ensure bed adhesion and reduce warping with ABS, you will need to upgrade your print bed heater to a higher wattage. It is also interesting to note that the different filaments prefer different build surfaces.

Optimal print speeds vary wildly depending on a number of factors, but generally speaking, speeds of between 30mm/s and 100mm/s are fine for PLA. ABS doesn’t typically flow quite as easily as PLA so lower printing speeds may be advisable for the best print results,. 50mm/s is a reasonable speed at which to start printing ABS, and you can increase it gradually to see what the limit is for your particular machine.

Once you have selected your print settings for your filament, you are ready to start producing customized plastic parts. If all goes well with the prints, it is important to know that in many cases there is still more work to be done.

That is, there is a strong chance that your parts may require post-processing, especially if you have used support materials, or if you need to alter the aesthetics of the parts.

For both PLA and ABS filaments, good old-fashioned sanding works well for simpler parts (use fine grit, wet paper). Though it may not be the best option when dealing with more complicated geometries for a variety of reasons, namely accessibility and part fragility.

Vibratory bowls with abrasive pellets/powders are commonly used in several industries for smoothing parts made from a variety of polymers, including ABS and PLA. So if you have access to this equipment, this is a good option that produces great results.

With many polymers, there is also the option of using vapor smoothing to reduce the stepping effect of 3D printing. This post processing technique results in parts with a smooth, near-mirror finish. Acetone vapor is generally used for smoothing ABS, as the material dissolves the ABS from the outer surface, melting the outer faces so that they become seamless.

There are other chemicals available for smoothing  PLA, although the process can be a little more complicated (especially in regards to health and safety). For instance, some polymers can be smoothed by the use of chloroform. Naturally, keep a window open if dealing with that stuff.

Now to sum up the key takeaways about PLA and ABS 3D printing filaments.

Your reward for choosing to print with ABS is an impact-resistant plastic part that holds its shape even at the boiling temperature of water.

Your reward for printing with PLA is an easy-to-print, low-cost plastic that outperforms ABS in terms of strength and stiffness at ambient temperatures.

Take these use cases as an example: if you are printing a pipe fitting for hot fluids (at low pressure), you would probably opt for ABS just to be on the safe side. For pretty much all other mechanical fittings and fixtures used in  “normal” room temperature scenarios, such as brackets and jigs, PLA is absolutely fine (or better) in most cases.

Check out these other articles in the series where we be take a look at PLA compares to PETG and also how ABS and PETG filaments stand up against each other.

Soft robots that can sense touch, pressure, movement and temperature

The stiffest porous lightweight materials ever

Researchers at ETH have developed and manufactured a family of architectures that maximises the stiffness of porous lightweight materials. It’s practically impossible to develop stiffer designs.