This image shows a prototype of the linear tension piston, rested (on top) and pressurized (on the bottom). Credit: Wyss Institute at Harvard University

Since their invention in the late 1700s when French-born British physicist Denis Papin, the inventor of the pressure cooker, proposed the piston principle, pistons have been used to harness the power of fluids to perform work in numerous machines and devices.

Conventional pistons are made of a rigid chamber and a piston inside, which can slide along the chamber’s inner wall while at the same time maintaining a tight seal. As a result, the piston divides two spaces, which are filled with two fluids and connected to two exterior fluid sources. If the fluids have different pressures, the piston will slide into the direction with the lower pressure and can at the same time drive the movement of a shaft or other device to do physical work. This principle has been used to design many machines, including various piston engines, hydraulic lifters and cranes such as the ones used on construction sites, and power-tools.

However, conventional pistons suffer from several shortcomings: the high friction between the moving piston and the chamber wall can lead to breakdown of the seal, leakage, and gradual or sudden malfunctions. In addition, especially in the lower pressure-spectrum, energy efficiencies and response speeds often are limited.

Now, a team of roboticists at Harvard’s Wyss Institute for Biologically Inspired Engineering, the Harvard John A. Paulson School of Engineering and Applied Sciences (SEAS), and Massachusetts Institute of Technology (MIT) has developed a new way to design pistons that replaces their conventional rigid elements with a mechanism using compressible structures inside a membrane made of soft materials.

The resulting “tension pistons” generate more than three times the force of comparable conventional pistons, eliminate much of the friction, and at low pressures are up to 40% more energy efficient. The study is published in Advanced Functional Materials.

“These ‘tension pistons’ fabricated with structures incorporating soft, flexible materials are a fundamentally new approach to piston architecture, that open an extensive design space. They could be dropped into machines, replacing conventional pistons, providing improved energy efficiency,” said Wyss Institute Founding Core Faculty member and co-corresponding author Robert Wood, Ph.D., who is also the Charles River Professor of Engineering and Applied Sciences at SEAS and co-lead of the Wyss Institute’s Bioinspired Soft Robotics Initiative. “Importantly, this concept also enables a range of new geometries and functional variations that may empower engineers to invent new machines and devices and to miniaturize existing ones.” 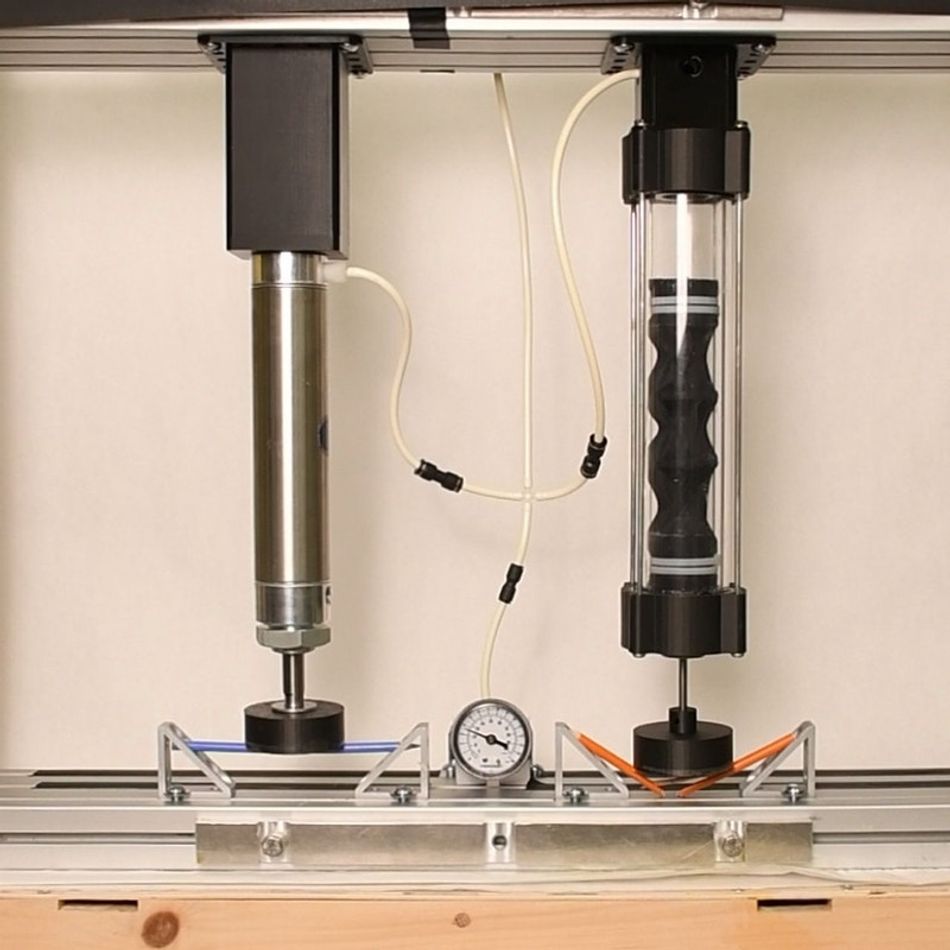 The team showed in an object-crushing comparison between a conventional piston (air cylinder; left) and a tension piston (right) that the tension piston can produce greater forces at the same air-pressure. Credit: Wyss Institute at Harvard University

Wood led the study together with Daniela Rus, Ph.D., Professor and Director of MIT’s Computer Science and Artificial Intelligence Laboratory (CSAIL) and Shuguang Li, Ph.D., a Postdoctoral Fellow mentored by Wood and Rus.

The tension piston concept builds on the team’s “fluid-driven origami-inspired artificial muscles” (FOAMs) that use soft materials to give soft robots more power and motion control while maintaining their flexible architectures. FOAMs are made of a folded structure that is embedded within a fluid in a flexible and hermetically sealed skin. Changing the fluid pressure triggers the origami-like structure to unfold or collapse along a pre-configured geometrical path, which induces a shape-shift in the entire FOAM, allowing it to grasp or release objects or to perform other kinds of work.

“In principle, we explored the use of FOAMs as pistons within a rigid chamber,” said Li. “By using a flexible membrane bonded to a compressible skeletal structure inside, and connecting it to one of the two fluid ports, we can create a separate fluid compartment that exhibits the functionality of a piston.”

The researchers showed that a rise in driving pressure in the second fluid reservoir surrounding the membrane in the chamber increases the tension forces in the membrane material that are directly transmitted to the bonded skeletal structure. By physically linking the skeleton with an actuating element that reaches out of the chamber, compression of the skeleton is coupled to a mechanical movement outside the piston.

“Better pistons could fundamentally transform the way we design and utilize many types of systems, from shock absorbers and car engines to bulldozers and mining equipment,” says Rus, the Andrew (1956) and Erna Viterbi Professor of Electrical Engineering and Computer Science at MIT. “We think that an approach like this could help engineers devise different ways to make their creations stronger and more energy-efficient.”

The team tested their piston against a conventional piston in an object-crushing task, and showed that it broke objects like wooden pencils at much lower input pressures (pressures generated in the skin-surrounding fluid compartment). At the same input pressures, particularly in the lower pressure range, the tension pistons developed more than three times greater output forces and display more than 40% higher energy efficiency by harnessing the fluid-induced tension in their flexible skin materials.

“By configuring the compressible skeletons with very different geometries such as a series of discrete discs, as hinged skeletons, or as spring skeletons, the output forces and motions become highly tunable,” said Li. “We can even incorporate more than one tension piston into a single chamber, or go a step further and also fabricate the surrounding chamber with a flexible material like an air-tight nylon fabric.”

“The invention of tension pistons by the team of Robert Wood and his MIT collaborator points out a potentially impactful new direction in which new soft robotic principles can be interfaced with existing technology to bring significant advances to a variety of industrial and environmental areas, including the development of new robotic devices and applications,” said Wyss Institute Founding Director Donald Ingber, M.D., Ph.D., who is also the Judah Folkman Professor of Vascular Biology at HMS and the Vascular Biology Program at Boston Children’s Hospital, as well as Professor of Bioengineering at SEAS.

Getting to the heart of engineering a heart

Towards more effective tendon repair with a multi-functional biomaterial

Researchers from North Carolina State University and Elon University have developed a technique that allows them to remotely control the movement of soft robots, lock them into position for as long as needed and later reconfigure the robots into new shapes.