Perovskite solar cells have clearly caught up with silicon solar cells in terms of efficiency - but some of their properties are not yet fully understood. (Photo: Markus Breig, KIT)

Perovskite semiconductors are seen as promising materials for next-generation solar cells. How well a semiconductor is for use in photovoltaics can be seen, among other things, from the so-called photoluminescence quantum yield. Researchers at the Karlsruhe Institute of Technology (KIT) have developed a new model with which the photoluminescence quantum yield of perovskite layers can be precisely determined for the first time. They report about it in the magazine Matter . (DOI: 10.1016 / j.matt.2021.01.019)

Photovoltaics make a significant contribution to a sustainable energy supply. The material used is decisive for the efficiency of solar cells, which convert light energy directly into electrical energy. Metal halide perovskites are considered particularly promising materials for next-generation solar cells. With these semiconductors, which owe their name to the special perovskite crystal structure, a significant increase in efficiency has been achieved in recent years: Perovskite solar cells have now achieved an efficiency of up to 25.5 percent - not far from that of the market-dominating silicon Solar cells. In addition, the raw materials required for perovskite solar cells are abundant, the solar cells can be produced easily and cheaply and used in a variety of ways.

To come close to this level of efficiency, the optoelectronic quality of perovskite semiconductors must continue to increase. Basically, materials suitable for photovoltaics should not only absorb light, but should also efficiently emit it again - a process known as photoluminescence. The associated measurand, called photoluminescence quantum yield, is therefore ideally suited to determine the quality of the perovskite semiconductor. Researchers at the Institute for Microstructure Technology (IMT) and at the Light Technology Institute (LTI) of KIT have now developed a new model together with scientists from the Center for Advanced Materials (CAM) at the University of Heidelberg and the Technical University of Dresden, with which the photoluminescence quantum yield of perovskite layers can be reliably and precisely determined for the first time. They are currently reporting on their results in the journalMatter . 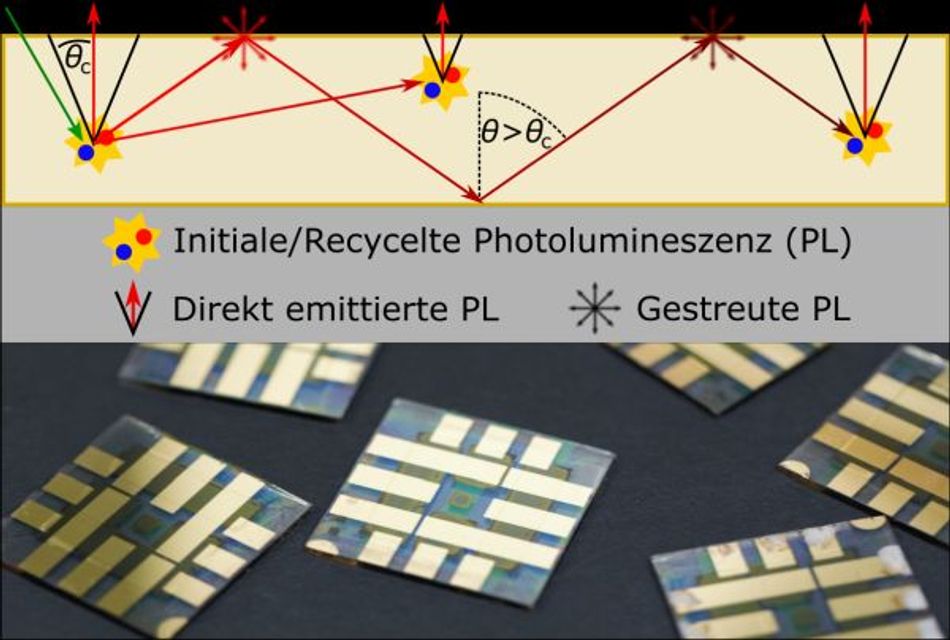 The proportion of so-called photon recycling, the re-emission of reabsorbed photons, plays an important role in the calculation of the photoluminescence quantum yield. (Figure / Photo: IMT / KIT)

"Our model allows us to determine the photoluminescence quantum yield under solar irradiation conditions more precisely than before," explains Dr. Paul Faßl from the IMT of KIT. "It depends on the photon recycling, that is, the proportion of the photons emitted by the perovskite that is reabsorbed and re-emitted within the thin layers." The researchers applied their model to methylammonium lead triiodide (CH 3 NH 3 PbI 3), one of the perovskites with the highest photoluminescence quantum yield. This was previously estimated at around 90 percent, but according to the model calculations it is around 78 percent. As the scientists explain, the previous estimates did not adequately take into account the effect of light scattering and therefore underestimated the probability that photons - the quanta of light energy - escape from the layer before they are reabsorbed. "Our results show that the potential for optimizing these materials is significantly higher than previously assumed," says Dr. Ulrich W. Paetzold, head of the Advanced Optics and Materials for Next Generation Photovoltaics group at the IMT of KIT. The research team provides an open source application,

New Sensor to Increase the Number of Trains on the Route

High-efficiency but fragile molecules for converting light to electricity thrive with a little protection.