The artificial muscle in use as a bicep lifts a skeleton’s arm to a 90 degree position. Photos And Video Credit: Aslan Miriyev/Columbia Engineering

Researchers at Columbia Engineering have solved a long-standing issue in the creation of untethered soft robots whose actions and movements can help mimic natural biological systems. A group in the Creative Machines lab led by Hod Lipson, professor of mechanical engineering, has developed a 3D-printable synthetic soft muscle, a one-of-a-kind artificial active tissue with intrinsic expansion ability that does not require an external compressor or high voltage equipment as previous muscles required. The new material has a strain density (expansion per gram) that is 15 times larger than natural muscle, and can lift 1000 times its own weight. 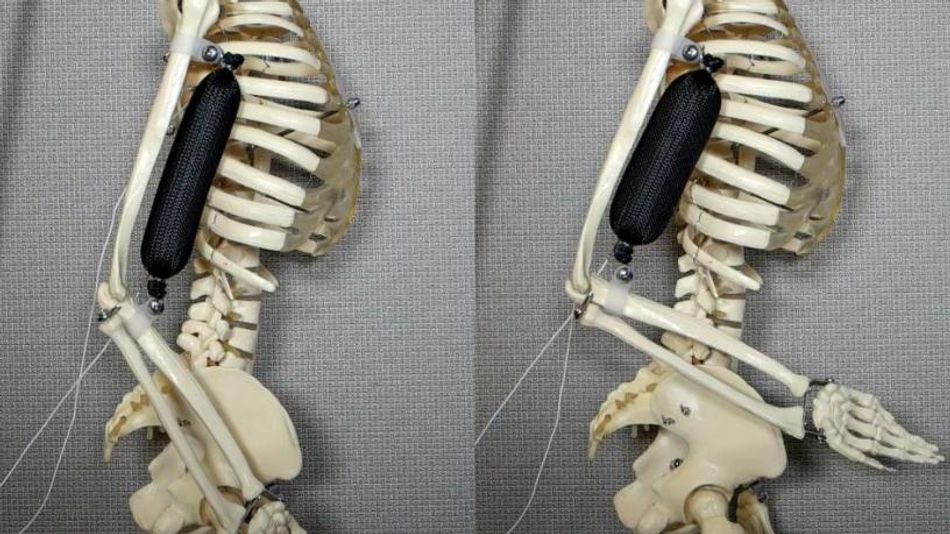 The artificial muscle in use as a bicep lifts a skeleton’s arm to a 90 degree position. Photos And Video Credit: Aslan Miriyev/Columbia Engineering

Previously, no material has been capable of functioning as a soft muscle due to an inability to exhibit the desired properties of high actuation stress and high strain. Existing soft actuator technologies are typically based on pneumatic or hydraulic inflation of elastomer skins that expand when air or liquid is supplied to them. The external compressors and pressure-regulating equipment required for such technologies prevent miniaturization and the creation of robots that can move and work independently.

“We’ve been making great strides toward making robots minds, but robot bodies are still primitive,” said Hod Lipson. “This is a big piece of the puzzle and, like biology, the new actuator can be shaped and reshaped a thousand ways. We’ve overcome one of the final barriers to making lifelike robots.”

This video shows the soft composite actuator and its performance in a series of experiments. Photos And Video Credit: Aslan Miriyev/Columbia Engineering

Inspired by living organisms, soft material robotics hold great promise for areas where robots need to contact and interact with humans, such as manufacturing and healthcare. Unlike rigid robots, soft robots can replicate natural motion—grasping and manipulation—to provide medical and other types of assistance, perform delicate tasks, or pick up soft objects.

To achieve an actuator with high strain and high stress coupled with low density, lead author of the study Aslan Miriyev, a postdoctoral researcher in the Creative Machines lab, used a silicone rubber matrix with ethanol distributed throughout in micro-bubbles. The solution combined the elastic properties and extreme volume change attributes of other material systems while also being easy to fabricate, low cost, and made of environmentally safe materials.

After being 3D-printed into the desired shape, the artificial muscle was electrically actuated using a thin resistive wire and low-power (8V). It was tested in a variety of robotic applications where it showed significant expansion-contraction ability, being capable of expansion up to 900% when electrically heated to 80°C. Via computer controls, the autonomous unit is capable of performing motion tasks in almost any design.

“Our soft functional material may serve as robust soft muscle, possibly revolutionizing the way that soft robotic solutions are engineered today,” said Miriyev. “It can push, pull, bend, twist, and lift weight. It’s the closest artificial material equivalent we have to a natural muscle.”

The researchers will continue to build on this development, incorporating conductive materials to replace the embedded wire, accelerating the muscle’s response time and increasing its shelf life. Long-term, they will involve artificial intelligence to learn to control the muscle, which may be a last milestone towards replicating natural motion.