Monitoring vitals and diagnosing ailments can be clunky, painful and inconvenient. But researchers like Huanyu “Larry” Cheng, Dorothy Quiggle Career Development Assistant Professor of Engineering Science and Mechanics at Penn State, are working to improve health monitoring by creating wearable sensors that collect data for clinicians while limiting discomfort for patients.

Since joining the Penn State Department of Engineering Science and Mechanics in 2015, Cheng has engineered novel components and approaches to develop such devices as wearable head scanners, needle-free glucose monitors, wearable antennas and printable electronics. The sensors, made with flexible electronics, are capable of monitoring patients’ physical motions and chemical signals in their sweat, skin and more to help diagnose or inform treatment plans.

Industry partners from various disciplines recognize the demand for innovation in wearable electronics, according to Cheng, and they are willing to invest. In December 2021, Meta Reality Labs, Facebook’s technology development branch, awarded Cheng $150,000 in unrestricted funds to advance biodegradable, stretchable, energy-generating systems.

“There’s a significant need for environmentally-friendly, self-charging sensors that can monitor patients’ vital signs without contributing to their physical or financial stress — and we’re finding those solutions can be applied to a broad range of challenges,” Cheng said. “My research program is focused on understanding the interactions and limits of various materials, with the goal of fabricating new methods and devices to address these issues.”

Developing flexible, economical sensors is one thing; powering them is another. Although self-charging power units for stretchable energy harvesters already exist, they are expensive to fabricate, heavy to carry and “suffer from low and unstable output power,” according to Cheng.

Graphene-based materials, however, are light and tiny. Graphene consists of a single layer of hexagonally arranged carbon atoms. Using a laser, manufacturers can create layered graphene foams in various shapes at a low cost. When correctly shaped, graphene can harvest energy from motion, such as human body movements, and store it as electrical energy in micro-supercapacitors. 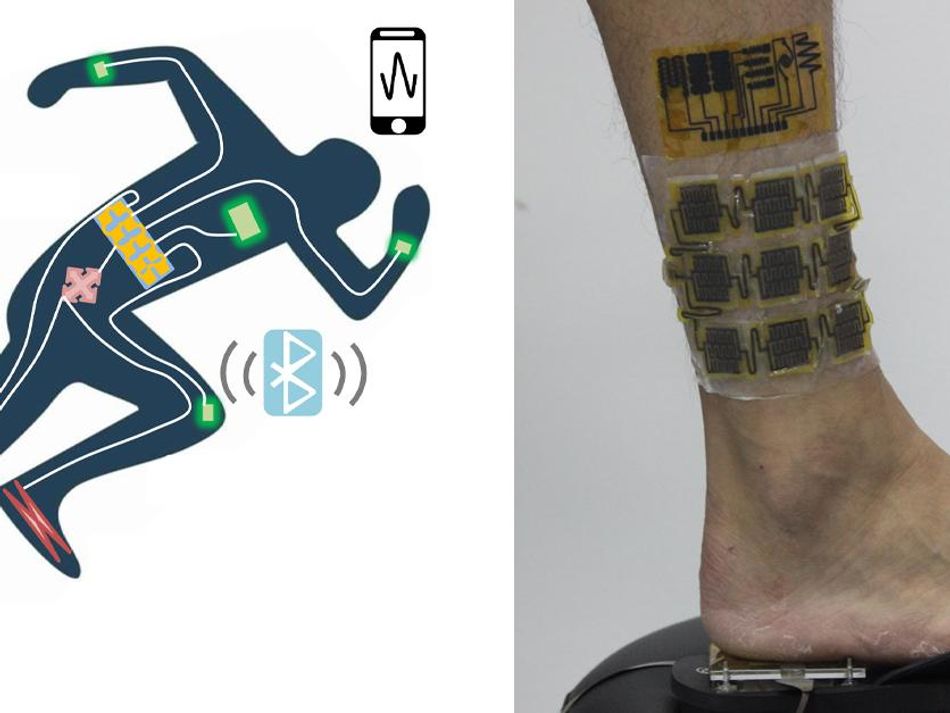 Like other types of wearable sensors, the self-powered device can measure users’ vital signs such as pulse, temperature, electrocardiogram, blood pressure and blood oxygen. The difference, Cheng said, is that the sensor doesn’t require a wired power supply or a charger.

“While monitoring various signals, the device collects power from body movements, in a sort of closed feedback loop,” Cheng said, noting that Bluetooth or radio transmission of data could eliminate wired sensing entirely. “It is a fully integrated system based on the same simple, low-cost, scalable manufacturing methods we employ to develop individual monitoring components.”

The approach has several potential applications — including beyond humans, Cheng said — such as tracking the movements of wildlife like bats or seals. The animals’ movements can continuously recharge the device.

“We incorporated several of our previous developments to make this full system — but we’re not done,” Cheng said. “We want to make every component of these systems as economical, sustainable and hardy as possible.”

In this vein, Cheng and his team have also published two recent papers detailing advances in more efficient, cost-effective and renewable approaches to improve sensors and their applications.

From tissue paper to pressure readings

Tissue paper decorates presents, protects breakables and, thanks to Cheng and his team, monitors blood pressure and respiratory conditions.

The device is created by dipping a piece of tissue paper into conductive material, which is then pressurized to create a 3D scaffold and encapsulated to become a sensor that sticks to the skin. 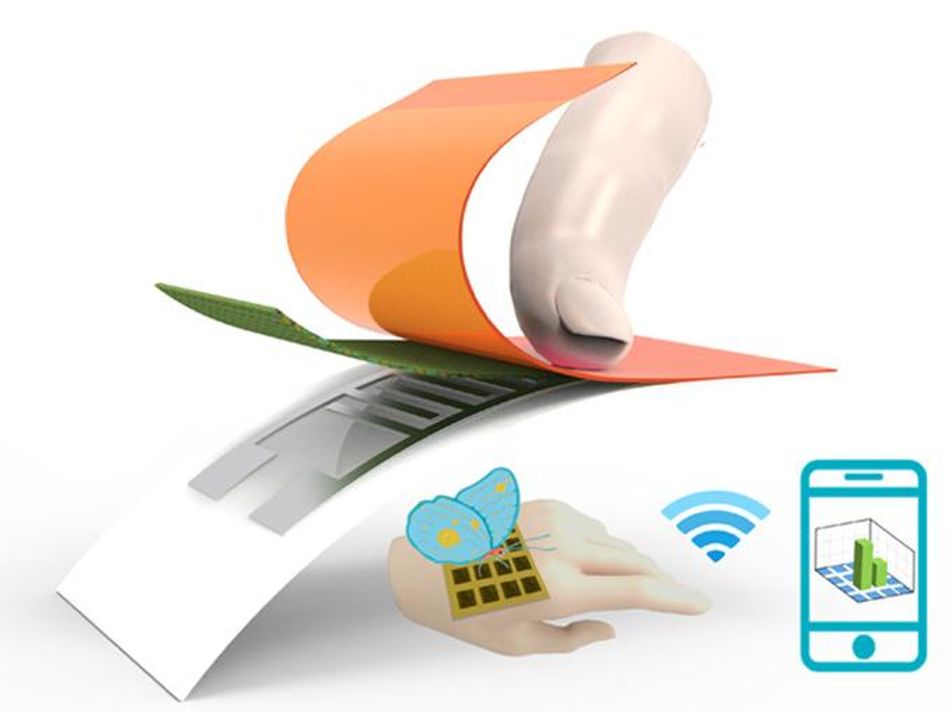 This wearable sensor is created by dipping a piece of tissue paper into conductive material, which is then pressurized to create a 3D scaffold and encapsulated to become a sensor that sticks to the skin. Pressure readings can be done on the back of the hand and sent to a smartphone. Credit: Larry Cheng group, Hebei University of Technology, Xiangtan University. All Rights Reserved.

The wireless device adheres comfortably to a user’s forearm and reads blood pressure by measuring the dilation and constriction of a blood vessel in the wrist. According to Cheng, it is a much smaller and easier device to use than a conventional blood pressure monitor, which uses a cuff to maintain pressure to an arm to get a single reading.

“In the hospital, a blood pressure cuff wakes patients up when they’re trying to sleep,” Cheng said. “This device would allow continuous, remote monitoring 24 hours a day.”

The device amasses data on blood pressure, heart rate and cardiac activity, which can be sent to a health care provider through a Bluetooth smartphone app.

The device also measures pulsation and motion of the body through pressure readings, which allow for specific movements to be quantified, like range of motion for a joint. Cheng said that the data also could track healthy movement, like hand gestures during speech, to inform robotic prosthetics that incorporate artificial intelligence.

“The pressure-based manufacturing method is easy and low-cost,” Cheng said. “All the materials, like the silver in the sensors, can be recycled after the device is discarded, and they are readily available.”

The sensor is light enough to be comfortable, but durable enough to hold up when a user is jogging or sweating. The researchers also incorporated the sensor into a face mask to remotely monitor respiratory conditions, including potential abnormalities for early detection of emergencies like opioid overdose.

In future research, Cheng said he will investigate incorporating drug delivery through the device when it detects specific symptoms.

“A future iteration of the device could detect a drug overdose in real time, and administer naloxone, saving a user’s life,” Cheng said.

A sensor for humid environments

Most wearable sensors use superhydrophobic materials to repel water, but they have limited flexibility and often degrade quickly in humid environments — a major issue in field hospitals or other medical facilities without climate control, Cheng said.

To solve that problem, Cheng’s lab combined superhydrophobic materials with Joule heating, where electric current passes through a conductor to produce heat. The heat provides continuous moisture resistance, even when the sensor is in an environment with 99% humidity. 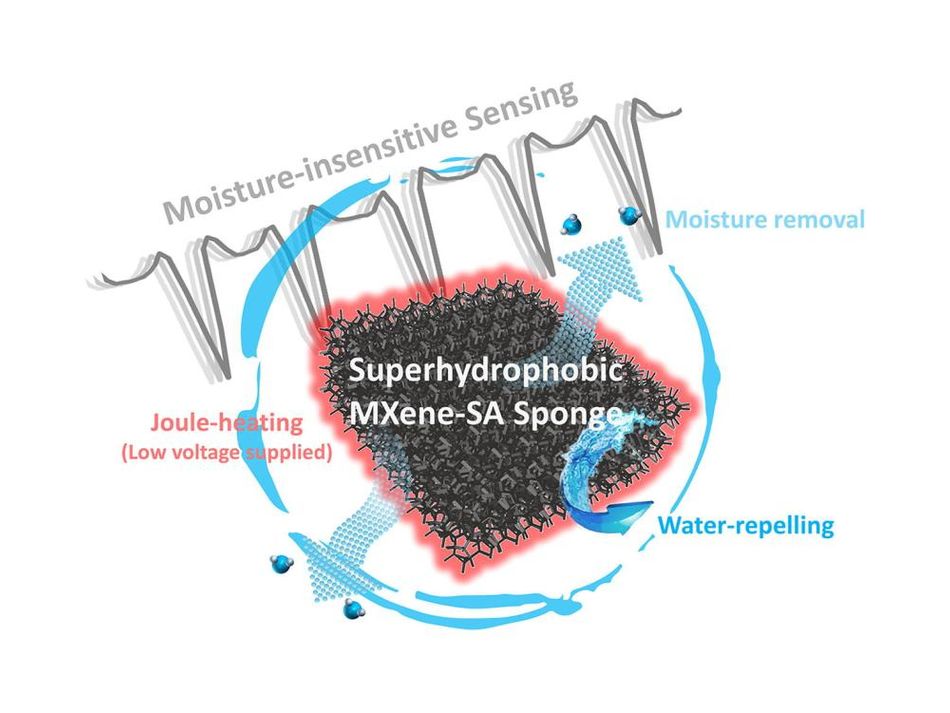 A combination of superhydrophobic materials and Joule heating allows this sensor to stay dry and functional, even in environments with up to 99% humidity, according to Cheng.  Credit: Larry Cheng group, Hebei University of Technology, Xiangtan University. All Rights Reserved.

The result is a new flexible pressure sensor that is able to withstand high degrees of humidity. The details were made available online ahead of the March issue of Chemical Engineering Journal.

Cheng’s sensor is made of a transitional metal and sodium alginate, a food-grade material extracted from algae, which allow the device to repel large water droplets, like a lotus plant does in nature.

With durable materials and constant heat, the sensor can monitor a user’s vital signs even in “extreme use scenarios,” according to Cheng, such as when users are sweating while running, biking or sunbathing.

Despite all his manifold discoveries and advancements, Cheng is not finished; his research team will continue to transform the wearable medical devices sphere.

“We don’t know where inspiration will strike — tissue paper, lotus plants, motion power and more have all proved fruitful sources,” Cheng said. “From discovery to research to application, our team is enjoying the challenge of creating the next generation of medical devices.”

Designed around a novel DNA aptamer, this flexible sensor array can pick up your cortisol — and therefore stress — levels by sampling your sweat, and transmit readings to a nearby smartphone or other device for long-term tracking.