Simplified schematic of the overall placement and location of the MTA in a rat. Image Credit: Zifang Zhao And Claudia Cea/Columbia Engineering

As researchers learn more about the brain, it has become clear that responsive neurostimulation is becoming increasingly effective at probing neural circuit function and treating neuropsychiatric disorders, such as epilepsy and Parkinson’s disease. But current approaches to designing a fully implantable and biocompatible device able to make such interventions have major limitations: their resolution isn’t high enough and most require large, bulky components that make implantation difficult with risk of complications.

A Columbia Engineering team led by Dion Khodagholy, assistant professor of electrical engineering, has come up with a new approach that shows great promise to improve such devices. Building on their earlier work to develop smaller, more efficient conformable bioelectronic transistors and materials, the researchers orchestrated their devices to create high performance implantable circuits that enable allow reading and manipulation of brain circuits. Their multiplex-then-amplify (MTA) system requires only one amplifier per multiplexer, in contrast to current approaches that need an equal number of amplifiers as number of channels.

“It is critical to be able to detect and intervene to treat brain-disorder-related symptoms, such as epileptic seizures, in real time,” said Khodagholy, a leader in bio- and neuroelectronics design. “Not only is our system much smaller and more flexible than current devices, but it also enables simultaneous stimulation of arbitrary waveforms on multiple independent channels, so it is much more versatile.

Khodagholy collaborated on the study, published today by Proceedings of the National Academy of Sciences (PNAS), with Jennifer N. Gelinas, Department of Neurology and the Institute for Genomic Medicine at Columbia University Irving Medical Center. Gelinas is a neuroscientist and specialist in pediatric epilepsy whose research focuses on understanding how neural networks become abnormal in epilepsy and designing methods to correct this dysfunction.

In order to record, detect, and localize epileptic discharges, scientists must log brain activity in multiple locations with high temporal resolution. This requires a high-sampling-rate multi-channel acquisition and stimulation device and circuit. Conventional circuits need an equal number of amplifying circuits as number of channels before they can combine these signals into a stream of data using multiplexing. This increases the size of the circuits linearly with the number of channels.

Khodagholy knew from working with neurologists like Gelinas that there was a great need for an all-in-one, fully implantable system that can record, process, and stimulate brain activity—such a system would enable researchers to design personalized therapies. To record brain activity, he needed multi-channel amplifiers but the available options were too big and unwieldy. As the team continued to make their electrodes more effective, lowering impedance by using a conducting polymer, they suddenly wondered what would happen if they took advantage of their electrode improvements in circuit design and placed the multiplexer in front of, rather than after, the amplifier. 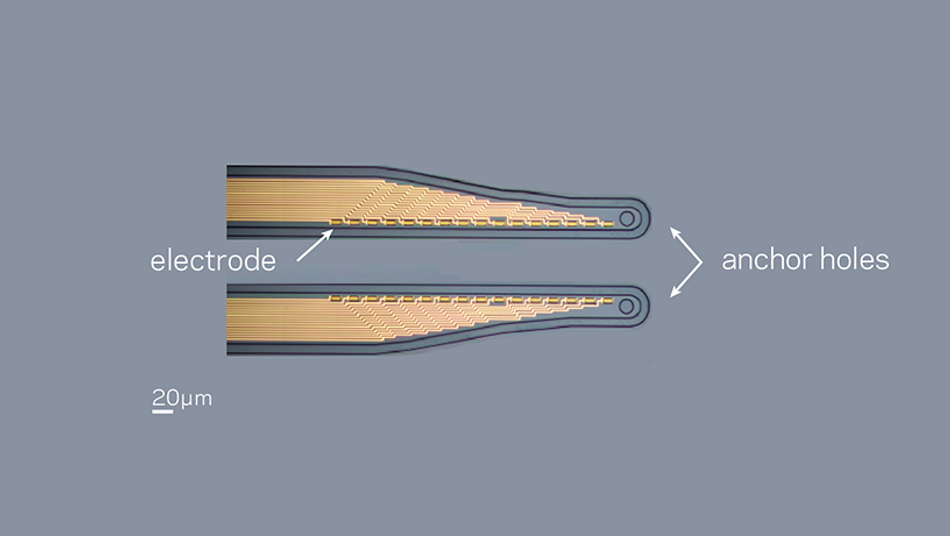 With this new idea in mind, the team built the MTA device and then confirmed its functionality by developing a fully implantable, responsive embedded system that can acquire—in real time—individual neural action potentials using conformable conducting polymer-based electrodes. It can accomplish this with low-latency arbitrary waveform stimulation and local data storage—all within a miniaturized (approximately the size of a quarter) physical footprint.

“The key challenge was to create an electric-charge drainage path during the multiplexing operation to eliminate any unwanted charge accumulation,” said Zifang Zhao, postdoctoral fellow in the department of electrical engineering and the first author of the study.

The MTA device, which was fabricated at the Columbia Nano-Initiative, enabled the team to then develop a novel closed-loop protocol to suppress pathological coupling between the hippocampus and cortex in real-time within an epileptic network. This type of approach could help address memory problems that often accompany epilepsy.

The team is now integrating their system with various experimental platforms with the goal of improving neural network function and cognitive skills.

The invention opens up new opportunities in the field of medicine, including endoscopy and laparoscopy, quantum technologies, and fiber-optic sensors. The concept proposed by the scientists got on the front cover of the October issue of ACS Photonics.