For over a decade the proliferation of the number and types of internet-connected devices has driven the rise and the growth of the Internet of Things (IoT) computing paradigm. Nowadays, non-trivial IoT applications involve interactions of IoT devices with people and other devices. These interactions are governed by the network topology of the IoT system, which defines how the various components communicate with each other.  There are different IoT network topologies, much in the same way there are many ways to structure a computer network. The various topologies have diverse functional and non-functional characteristics and serve different application needs. Specifically, IoT topologies vary significantly in their security, energy efficiency, latency, cost, and reliability characteristics.

A mesh topology comprises multiple IoT devices that connect directly, dynamically, and non-hierarchically to as many other devices as possible. The devices of a mesh network cooperate with one another to efficiently route data from producers to consumers within the network. Specifically, in a mesh network, messages travel from one IoT device to another until they reach their destination (e.g., an IoT gateway).  Hence, every IoT device acts as data capture and transmission endpoint, while at the same time operating as a repeater that relays data from other nodes. In full mesh networks, all nodes act as repeaters and relay nodes. However, there are also partial mesh network deployments, where only selected devices to act as repeaters and/or relay nodes. In practice, mesh IoT networks are used to extend the coverage of popular short-range wireless protocols (e.g., Zigbee and WirelessHART). 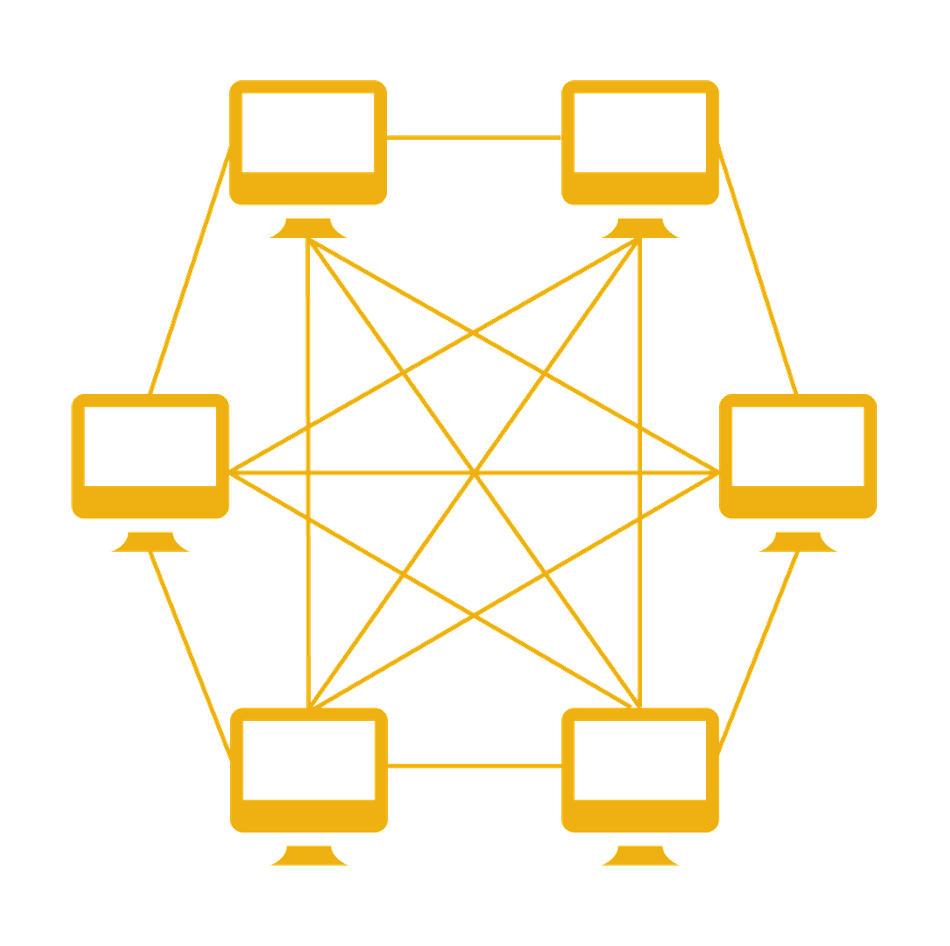 Mesh topologies present many advantages, which is the reason why they are increasingly used in IoT deployments. Specifically, in mesh networks, IoT data can be transmitted from different devices simultaneously, which leads to high throughput and supports high traffic scenarios. Additionally, mesh networks do not have any single points of failure: if one component fails, it is always possible to find an alternative route.

The downside of mesh networks lies in their complexity, which complicates their setup and increases the effort needed for managing and maintaining them. Moreover, the density of a mesh network’s connections is a setback to their scalability. Despite the low power required for data transmission, mesh networks are energy-intensive systems. This is due to the large number of relay connections involved in typical mesh networks - nodes must be continually available to relay messages, which can drain their battery in short time. Furthermore, mesh networks have high deployment costs. This is mainly due to the need for deploying many repeaters given the very short range between devices. Finally, one of the main disadvantages of mesh IoT topologies is that they are susceptible to security attacks. Specifically, it is theoretically possible to hack a mesh network by attacking a single node or repeater. Therefore, in an IoT network with many nodes and repeaters, hackers are provided with many opportunities to launch adversarial attacks.

In a star topology, IoT nodes and devices are individually connected to a central connection point such as a switch, a router, an access point, or an IoT gateway. It is a very popular topology, which is used by WiFi, cellular networks, and Low Power Wide Area Network (LPWAN) technologies like LoRa. 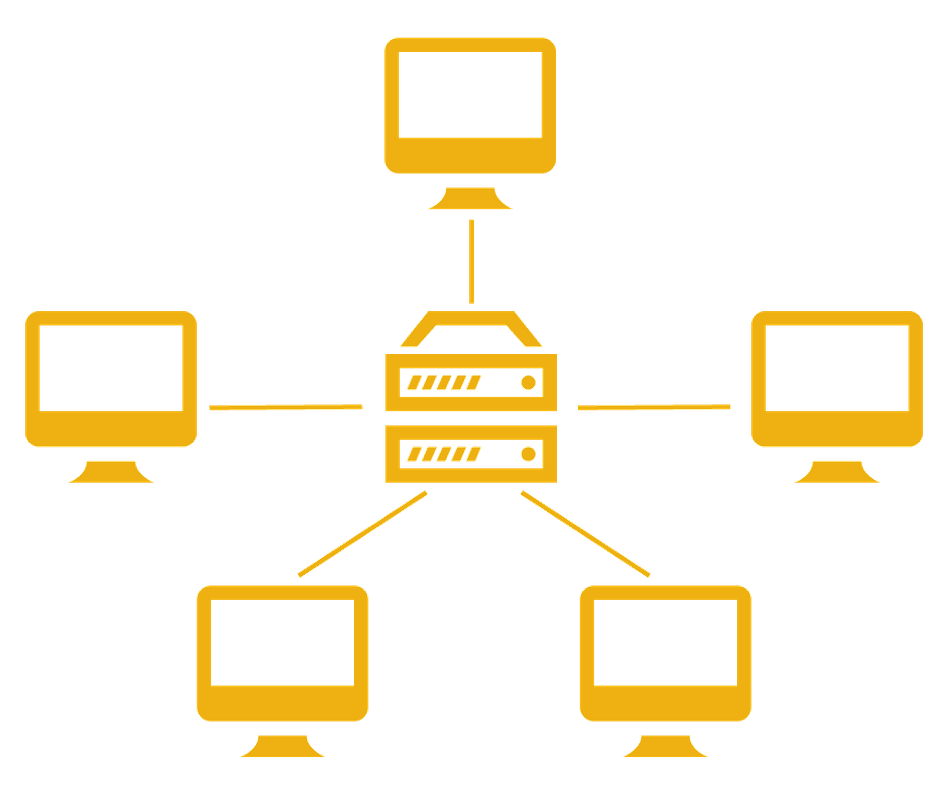 The main advantage of a star IoT network is that it delegates communication complexity to the central node. All the rest IoT devices can communicate according to their time or frequency slot.  In case of a device failure, the rest devices are not affected. Likewise, in the case of a security attack against an IoT device, only a single node is compromised, as endpoints operate independently of each other. Hence, star topologies offer better security than mesh networks. It is also easy and straightforward to add or remove nodes from the central connection point. This makes star topologies flexible and scalable. As already outlined, popular LPWAN networks rely on star topologies in order to minimize power consumption and to ensure that sensors and IoT devices can operate for large intervals without a battery change.

One of the main drawbacks of a star topology is that the radio link between the gateway and the devices can be very long, which increases the amount of energy needed for relaying a message. Nevertheless, contrary to mesh networks, in star topologies devices do not consume energy continuously, but rather only when they transmit data.

In the scope of bus topology, IoT devices are connected through a single cable, which is conveniently called a bus. A bus network enables a device to transmit data to any other device, much in the same way a public transportation bus enables passengers to get in and get out at any stop. Specifically, data from a source travels through the bus to all available devices and is ultimately picked up by the intended recipient i.e. the destination device. For the deployment of a bus network, each device is equipped with an interface connector like a Network Interface Card (NIC). 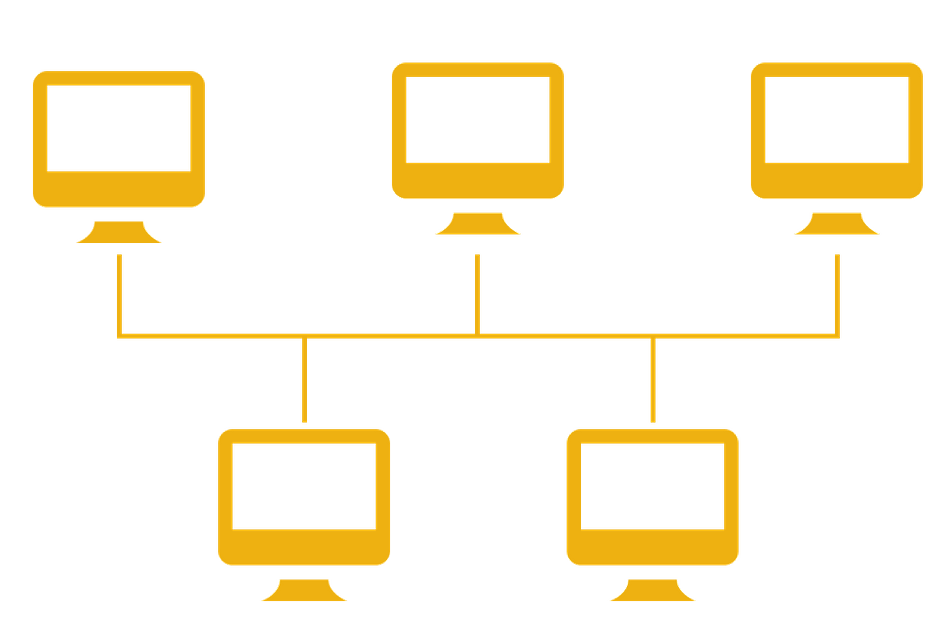 The main advantage of a bus topology is that it is fairly easy to implement and set up. Moreover, its deployment cost is lower than that of other topologies. Also, bus topologies are very easily understood and can be flexibly expanded.

Bus topologies are prone to failure since any cable failure will result in the network not working. Further, as the number of nodes grows, the bus network is subject to substantial performance degradation. On top of that, cable networks have a limited range of coverage, making them no longer suitable for large networks. Moreover, even though a bus network is typically low-cost to implement, it is vulnerable to failures and performance degradation, which increases the cost of failure and performance management functions.

A ring topology resembles a closed-loop bus, which enables devices to transmit data in a single direction. Following the initiation of data transmission, every node passes the data to the next node until the data reaches its intended destination. The intermediate nodes in a ring act as repeaters that maintain the strength of the signal. 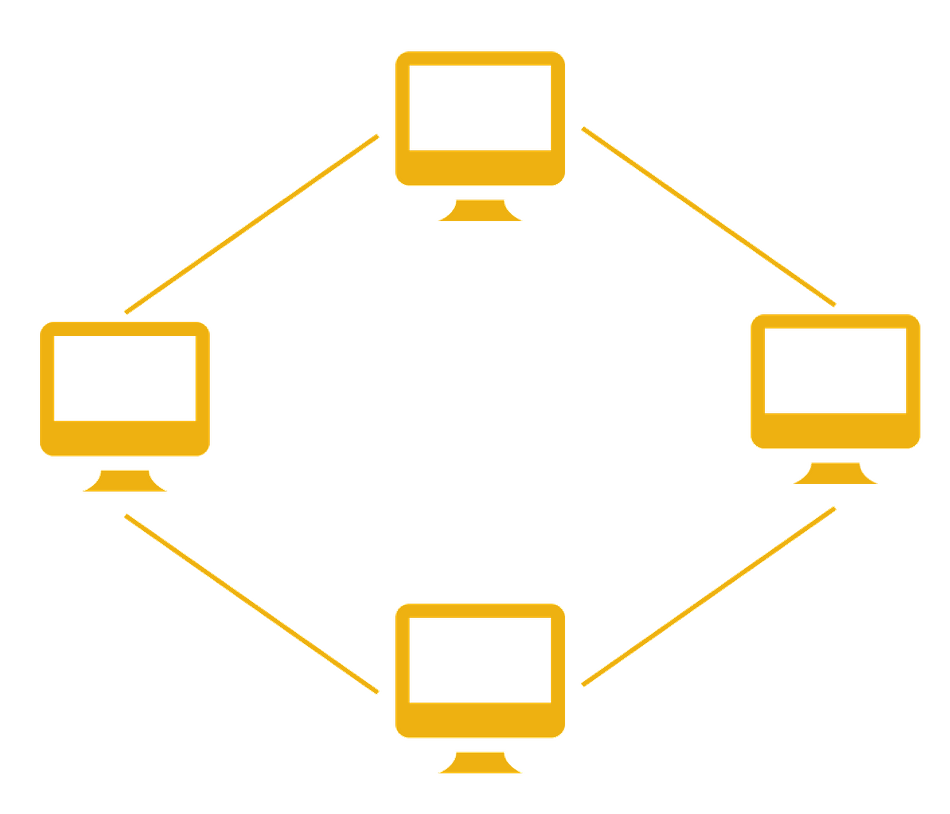 In ring topologies data flows in a single direction, which reduces collisions and achieves better throughput than bus topologies in high traffic contexts. Also, ring topologies obviate the need for controlling connectivity via some central server or gateway. Moreover, there are bi-directional ring networks that sustain node failure, since when a node fails data can flow through the reverse direction.

In several cases, IoT deployers combine two or more topologies in an integrated IoT solution. The rationale behind this combination is to leverage the advantages of more than one topology. Such combinations are commonly characterized as hybrid topologies. A hybrid topology is usually developed in a way that exploits the advantages of the topologies that it combines while avoiding their drawbacks. One of the most prominent hybrid topologies is the so-called tree networks, which interconnect multiple star topologies via a bus network. As such tree topologies combine star and bus networking aspects, including the data reliability of a ring network with the fault tolerance of a star topology. Tree networks are hierarchical, as each node can have multiple child nodes. As another example, ring and star networks can be also combined into hybrid topologies. In this case, the central points (e.g., hubs/gateways) of multiple star networks are connected in the scope of a ring. 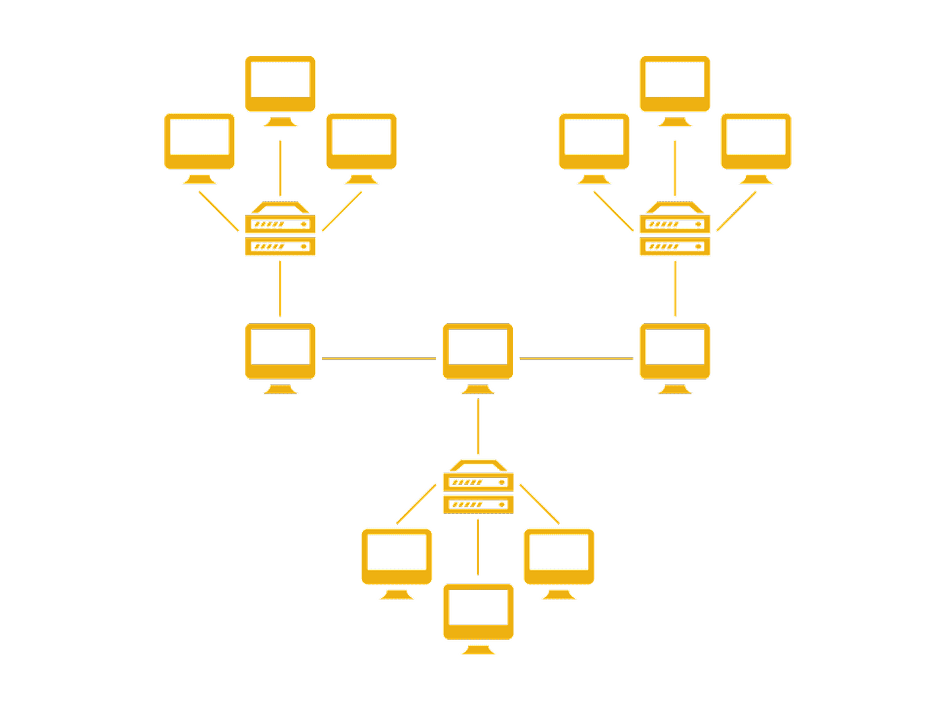 The main advantage of hybrid topologies lies in their flexibility. Specifically, hybrid topologies can combine different types of networks to fulfill specific latency, scalability, and energy efficiency requirements. Moreover, hybrid topologies tend to be very reliable. This is because it is fairly easy to detect and isolate faults without disrupting the rest parts of a hybrid network. Likewise, hybrid networks are very scalable, as new components can be added to a segment without essentially affecting the operations of other segments.

Hybrid networks are complex to design and set up. Their design requires significant effort as it goes beyond simple popular topologies and their implementation blueprints. Moreover, their complexity comes at a high deployment cost. In most cases, hybrid networks require expensive capital investments on elements like intelligent hubs, cooling infrastructure, and sophisticated networking devices. Overall, hybrid topologies are suited for large-scale deployments, yet they are inappropriate for simpler and smaller-scale projects.

For over a decade, IoT networks are growing in scale and functional sophistication. Hence, designers and deployers of IoT networks are faced with complex and dynamically evolving requirements such as varying performance, security, scalability, reliability, and power efficiency requirements.  In this context, there is no silver bullet regarding the network topology to be used. Rather, IoT deployers are offered a range of different options, notably the five topologies outlined in previous paragraphs. It is therefore important to understand the pros and cons of the above-listed options, as well as the scope of their applicability.

Fortunately, it is possible to leverage best practices and blueprints regarding the selection and optimization of IoT networking topologies. For instance, mesh networks are commonly used to support small and medium scale wireless sensor network applications, such as consumer applications based on protocols like Zigbee and Bluetooth. At the same time, modern IoT-focused networks such as LPWAN leverage star topologies. Specifically, most LPWAN deployments cover large-scale, geographically dispersed areas, and are based on a star topology. Thus, star topologies are the preferred option when it comes to covering large areas (e.g., smart cities) and networking distributed industrial facilities (e.g., factories, oil refineries, energy plants, industrial buildings). Likewise, ring networks are sometimes used in conjunction with star topologies to cover large metropolitan areas. IoT and network designers can always resort to hybrid topologies to fulfill complex or peculiar requirements.

There are also cases where designers must resolve various trade-offs prior to introducing the topology that best suits their needs. This is one of the most challenging, yet interesting, problems in IoT network design. To address such challenging problems, IoT designers and deployers must combine their knowledge and experience with industry best practices. Earlier paragraphs have shed light on the advantages and disadvantages of IoT topologies and could help engineers start their IoT network design journey on the right foot.

John Soldatos holds a PhD in Electrical & Computer Engineering from the National Technical University of Athens (2000) and is currently Honorary Research Fellow at the University of Glasgow, UK (2014-present). He was Associate Professor and Head of the Internet of Things (IoT) Group at the Athens In...

Predictive Maintenance: Using Smart Sensors to get the most out of your ass...

IIoT stands for the Industrial Internet of Things. You've probably seen a similar set of letters, the IoT, which is the Internet of Things. IoT refers to all digitally-connected devices, over and above such familiar items as phones, tablets, laptops and PCs.

How to capture Industrial IoT (IIoT) value through R&D innovation

This webinar was a Nordic Partner webinar hosted by Fractus Antennas and gives an introduction to Embedded Antennas for IoT.