Visible both in the inset photograph on the upper left and near the center of NASA's Perseverance Mars rover in this illustration is the palm-size dome called the Laser Retroreflector Array (LaRA). In the distant future, laser-equipped Mars orbiters could use such a reflector for scientific studies. Credit: NASA/JPL-Caltech

When the Apollo astronauts landed on the Moon, they brought devices with them called retroreflectors, which are essentially small arrays of mirrors. The plan was for scientists on Earth to aim lasers at them and calculate the time it took for the beams to return. This provided exceptionally precise measurements of the Moon's orbit and shape, including how it changed slightly based on Earth's gravitational pull.

Research with these Apollo-era lunar retroreflectors continues to this day, and scientists want to perform similar experiments on Mars. NASA's Perseverance rover - scheduled to land on the Red Planet on Feb. 18, 2021 - carries the palm-size Laser Retroreflector Array (LaRA). There's also small one aboard the agency's InSight lander, called Laser Retroreflector for InSight (LaRRI). And a retroreflector will be aboard the ESA (European Space Agency) ExoMars rover that launches in 2022.

While there is currently no laser in the works for this sort of Mars research, the devices are geared toward the future: Reflectors like these could one day enable scientists conducting what is called laser-ranging research to measure the position of a rover on the Martian surface, test Einstein's theory of general relativity, and help make future landings on the Red Planet more precise.

"Laser retroreflectors are shiny, pointlike position markers," said Simone Dell'Agnello, who led development of all three retroreflectors at Italy's National Institute for Nuclear Physics, which built the devices on behalf of the Italian Space Agency. "Because they're simple and maintenance-free, they can work for decades." 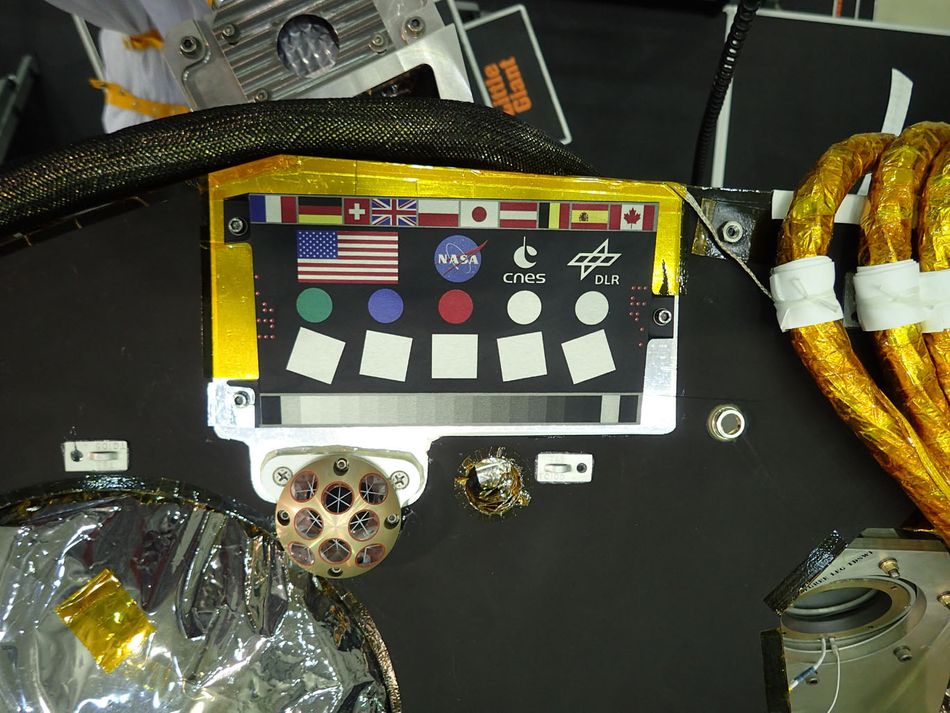 A Box of Mirrors

The devices work a lot like a bike reflector, bouncing light back in the direction of its source. Perseverance's LaRA, for example, is a 2-inch-wide (5-centimeter-wide) dome speckled with half-inch holes containing glass cells. In each cell, three mirrored faces are positioned at 90-degree angles from one another so that light entering the holes is directed back out at exactly the same direction it came from.

LaRA is much smaller than the retroreflectors on the Moon. The earliest ones, delivered by the Apollo 11 and 14 missions, are about the size of typical computer monitor and embedded with 100 reflectors; the ones delivered by Apollo 15 are even larger and embedded with 300 reflectors. That's because the lasers have to travel as much as 478,000 miles (770,000 kilometers) to the Moon and back. By the return trip, the beams are so faint, they can't be detected by the human eye.

The beams that Perseverance's LaRA and InSight's LaRRI were built to reflect would actually have a far shorter journey, despite Mars being some 249 million miles (401 million kilometers) away at its farthest point from Earth. Rather than traveling back and forth from Earth, which would require enormous retroreflectors, the laser beams would just need to travel back and forth from a future Mars orbiter equipped with an appropriate laser. 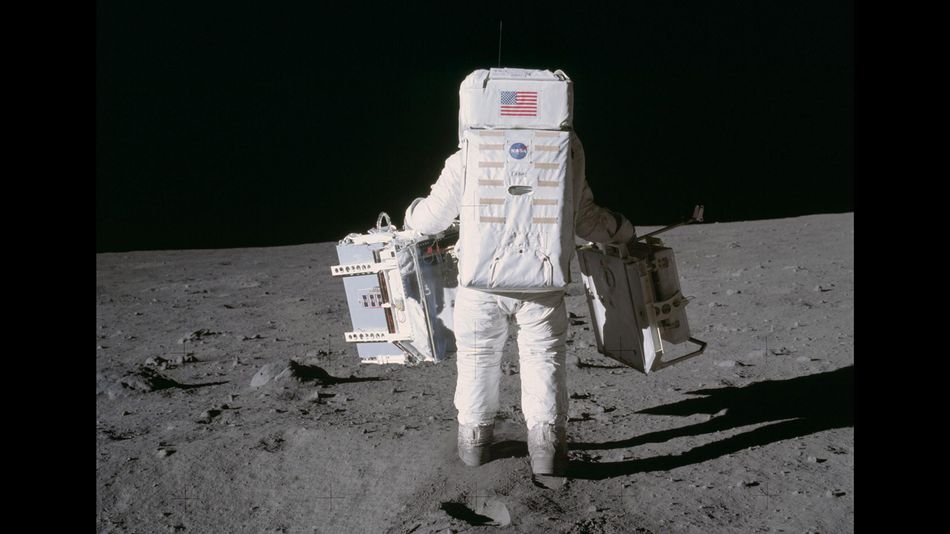 Such an orbiter could determine the precise position of a retroreflector on the Martian surface. And since Perseverance will be mobile, it could provide multiple points of reference. Meanwhile, the orbiter's position would also be tracked from Earth. This would allow scientists to test Einstein's theory of general relativity, as they have with retroreflectors on the Moon. Each planet's orbit is greatly influenced by the bend in space-time created by the Sun's large mass.

"This kind of science is important for understanding how gravity shapes our solar system, the whole universe, and ultimately the roles of dark matter and dark energy," Dell'Agnello noted.

In the case of the InSight lander, which touched down on Nov. 26, 2018, laser-ranging science could also aid the spacecraft's core mission of studying Mars' deep interior. InSight relies on a radio instrument to detect subtle differences in the planet's rotation. In learning from the instrument how the planet wobbles over time, scientists may finally determine whether Mars' core is liquid or solid.

And if the science team were able to use the lander's retroreflector, they could get even more precise positioning data than InSight's radio provides. LaRRI could also detect how the terrain InSight sits on shifts over time and in what direction, revealing how the Martian crust expands or contracts. 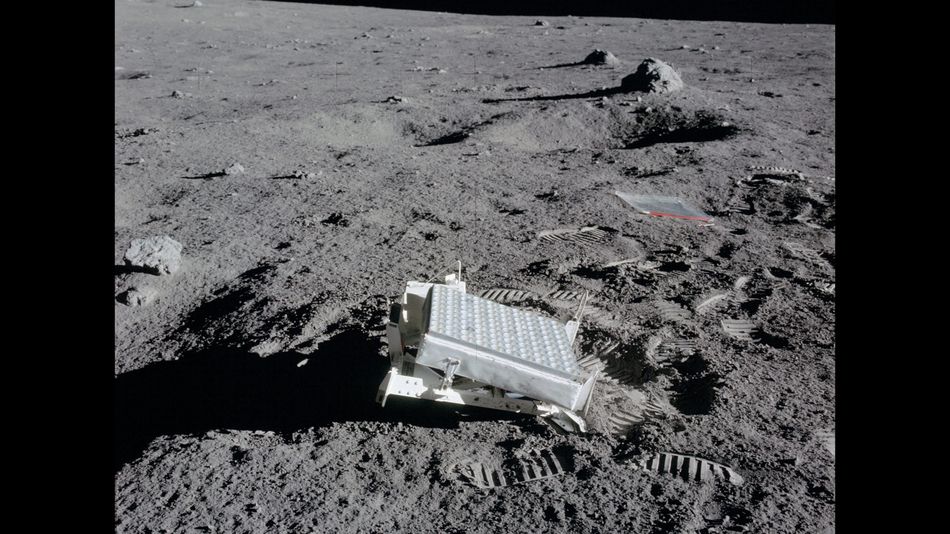 A close-up view, taken on Feb. 5, 1971, of the Laser Ranging Retro-Reflector (LR3), which the Apollo 14 astronauts deployed on the Moon during their lunar surface extravehicular activity. Credit: NASA

Mars landings are hard. To help get Perseverance safely to the surface, the mission will rely on Terrain-Relative Navigation, a new technology that compares images taken during descent to an onboard map. If the spacecraft sees itself getting too close to danger (like a cliffside or sand dunes), it can veer away.

But in such a mission-critical event, you can never have too many backups. Future missions barreling toward the surface of the Red Planet could use the series of reference points from laser retroreflectors as a check on the performance of their Terrain Relative Navigation systems - and perhaps even boost their accuracy down to a few centimeters. When the difference between successfully landing near an enticing geological formation or slipping down the steep slope of a crater wall can be measured in mere feet, retroreflectors might be critical.

A key objective for Perseverance's mission on Mars is astrobiology, including the search for signs of ancient microbial life. The rover will also characterize the planet's climate and geology, pave the way for human exploration of the Red Planet, and be the first planetary mission to collect and cache Martian rock and regolith (broken rock and dust). Subsequent missions, currently under consideration by NASA in cooperation with the European Space Agency, would send spacecraft to Mars to collect these cached samples from the surface and return them to Earth for in-depth analysis.

Managed for NASA by JPL, a division of Caltech in Pasadena, California, the Mars 2020 Perseverance rover is part of a larger program that includes missions to the Moon as a way to prepare for human exploration of the Red Planet. Charged with returning astronauts to the Moon by 2024, NASA will establish a sustained human presence on and around the Moon by 2028 through NASA's Artemis lunar exploration plans.

An electronics issue is suspected to be preventing the sensors from sharing their data about Mars weather with the spacecraft.