This novel sensor, made by pressing a glass-and-gold nanopatch design against liquid gallium, performs impressively in testing.

Surface-enhanced infrared absorption (SEIRA) spectroscopy has proven a valuable tool for non-destructive detection and identification, but with a key issue: Relying, as they do, on molecular vibrations interacting with and absorbing infrared light they become increasingly difficult to make: Tiny nanophotonic structures are built to create large numbers of “hot spots” where the weak effect is amplified, but the smaller the structures the harder it is to ensure that the molecules to be analyzed make their way where they’re needed.

It’s this problem a trio of researchers at the University of Buffalo and the Center for Integrated Nanotechnologies at Sandia National Laboratories claims to have solved, using a novel nanopatch antenna design which relies on a layer of liquid metal for its ground plane — and which can be quickly cleaned and reused, making it cost-effective and suitable for point-of-care medical sensing of materials down to a single molecule.

Traditional SEIRA sensors are constructed from assembled supercrystals of metal nanoparticles or by transferring graphene — the one-atom-thick allotrope of carbon which has found a use in a wide variety of fields — to from sensor structures, which first author Xianglong Miao and colleagues say is too complex for use in point-of-care applications.

Their proposal: A SIERA sensor made from an array of metallic nanostrips, a nanometric dieletric layer, and a metallic ground plane of liquid metal — gallium, in their prototypes, heated to just over room temperature and applied quickly and easily by pressing the sensor down into a small pool of the metal.

“The fluidic nature of liquid gallium allows it to be straightforwardly spread on the analyte film [of molecules to be analysed] and form the nanopatch antenna structures without the need for any bulky equipment such as a metal evaporator,” the team explains. “Such a sensor design and preparation procedure also makes the delivery of analytes into the nanometric sensing hot spots convenient and efficient.”

This novel sensor, with its liquid-metal ground plane, is both cheaper and easier to make than its rivals while outperforming them too.

The prototype sensors themselves were constructed by using electron-beam lithography to pattern glass or calcium fluoride substrates, then depositing 70nm-thick layer of gold. The analyte molecule film was applied using physical and chemical adsorption or spin-coating, depending on the particular prototype, and the gallium layer added by pushing the metal, heated to 30°C (86°F), through a syringe into a glass holder before scraping off the layer of gallium oxide which formed and pressing the sensor chip against the puddle.

“Compared with the conventional methods of depositing solid noble metals, such as evaporation or sputtering,” the researchers claim, “this method of coating liquid metal to complete the sensor structures in simple and quick to operate and it does not require expensive and bulky equipment, which significantly reduces the cost and is suitable for point-of-care sensing applications.”

Simple, quick, and cheap are all fantastic qualities in a sensor — but they’re meaningless if the sensor can’t sense. Thankfully, that’s not the case here: The team’s testing on detection of octadecanethiol (ODT), as well as a second larger-scale sensor for polymethylmethacrylate (PMMA), demonstrated a performance notably higher than rival SIERA sensors — as well as of reference sensors the team created using a more traditional noble metal ground plane.

“Our liquid-gallium-based sensor structures not only allow for simple and cost-effective device fabrication,” the team conclude, “but also lead to superior field enhancement and sensitivity performance.”

Those aren’t the only advantageous qualities the team highlight in the paper, however: Once the sensor had been measured optically, removal of the chip from the small pool of liquid gallium into which it had been pressed proved enough to also remove the gallium from the chip itself without residue — meaning the chip can be immediately re-used for subsequent analysis of the same analyte molecules or, for analytes which can be easily cleaned off, entirely recycled for a fresh sensing application. 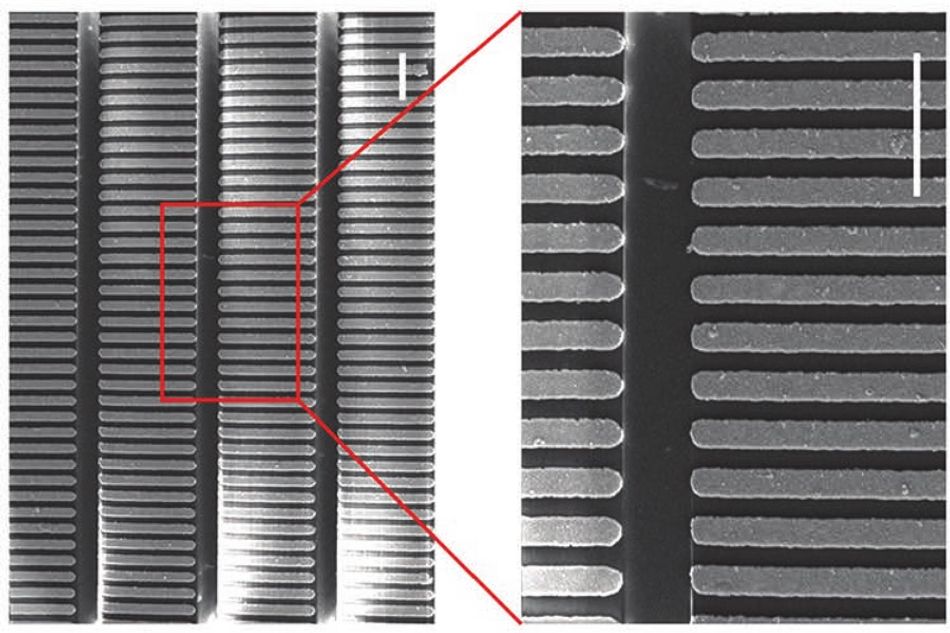 The team believes the sensor's performance can be boosted further by lessening the roughness of the gold surface.

While the results are impressive, though, there’s still work to be done. In particular, the team is confident the already-leading-edge performance of the sensors can be further enhanced through a process which would remove surface roughness from the gold nanostrip layer in order to reduce the minimum effective gap size of the nanopatch antenna structures.

There is also room to investigate the sensors’ suitability for a range of applications beyond those detailed within the paper, the researchers suggest, including index sensing, surface-enhanced Raman scattering sensing, non-linear optics, and cavity quantum electrodynamics — plus, of course, its potential for use in the medical field.

“The structure of our sensor makes it suitable for point-of-care applications that can be implemented by a nurse on a patient,” corresponding author Peter Q. Lui, assistant professor at the University of Buffalo School of Engineering and Applied Sciences, suggests in support of the work, “or even outside the hospital in a patient’s home.”

The team’s work has been published in Advanced Materials under early-access terms; data from the study are available from the corresponding author upon request.

Get ready for the biosensor future

Biosensors are set to revolutionize healthcare and our researchers are leading this revolution.

In the intensity of basic training, a smartwatch-based system warns recruits when they are at risk of heat injury.