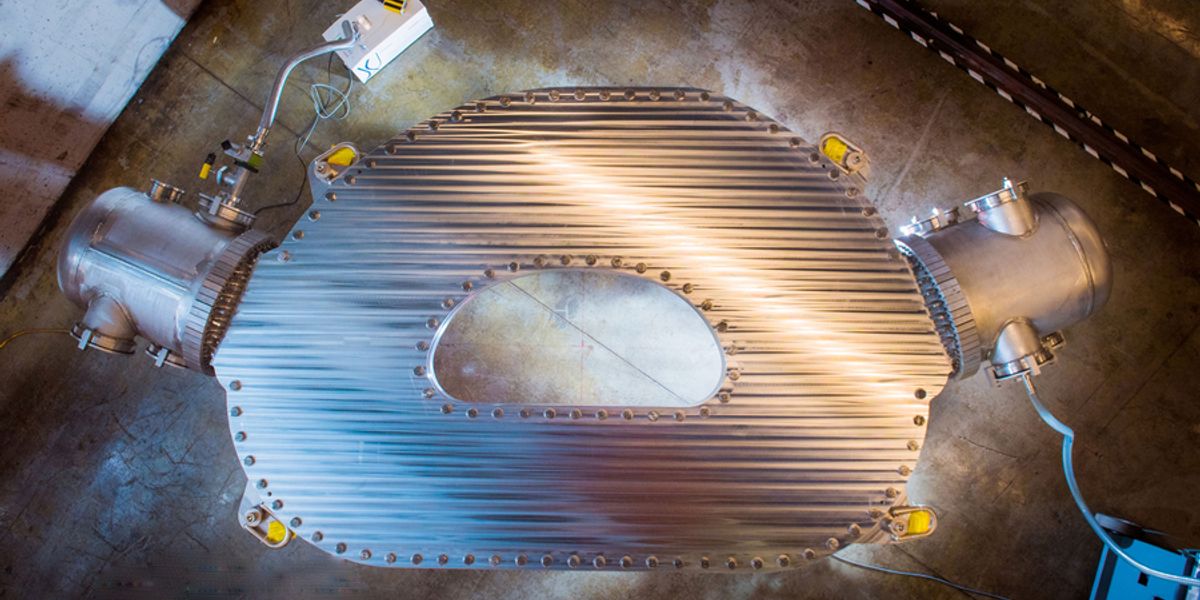 It was a moment three years in the making, based on intensive research and design work: On Sept. 5, for the first time, a large high-temperature superconducting electromagnet was ramped up to a field strength of 20 tesla, the most powerful magnetic field of its kind ever created on Earth. That successful demonstration helps resolve the greatest uncertainty in the quest to build the world’s first fusion power plant that can produce more power than it consumes, according to the project’s leaders at MIT and startup company Commonwealth Fusion Systems (CFS).

That advance paves the way, they say, for the long-sought creation of practical, inexpensive, carbon-free power plants that could make a major contribution to limiting the effects of global climate change.

“Fusion in a lot of ways is the ultimate clean energy source,” says Maria Zuber, MIT’s vice president for research and E. A. Griswold Professor of Geophysics. “The amount of power that is available is really game-changing.” The fuel used to create fusion energy comes from water, and “the Earth is full of water — it’s a nearly unlimited resource. We just have to figure out how to utilize it.” 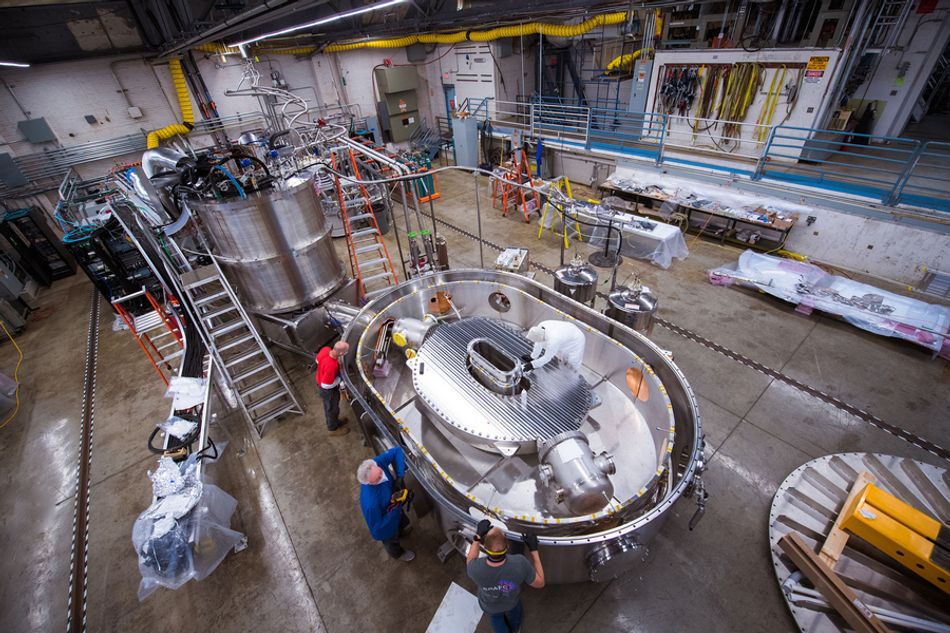 Caption:Collaborative team working on the magnet inside the test stand housed at MIT. Research, construction and testing of this magnet has been the single largest activity for the SPARC team, which has grown to include 270 members. Credits: Gretchen Ertl, CFS/MIT-PSFC, 2021

Developing the new magnet is seen as the greatest technological hurdle to making that happen; its successful operation now opens the door to demonstrating fusion in a lab on Earth, which has been pursued for decades with limited progress. With the magnet technology now successfully demonstrated, the MIT-CFS collaboration is on track to build the world’s first fusion device that can create and confine a plasma that produces more energy than it consumes. That demonstration device, called SPARC, is targeted for completion in 2025.

“The challenges of making fusion happen are both technical and scientific,” says Dennis Whyte, director of MIT’s Plasma Science and Fusion Center, which is working with CFS to develop SPARC. But once the technology is proven, he says, “it’s an inexhaustible, carbon-free source of energy that you can deploy anywhere and at any time. It’s really a fundamentally new energy source.”

Whyte, who is the Hitachi America Professor of Engineering, says this week’s demonstration represents a major milestone, addressing the biggest questions remaining about the feasibility of the SPARC design. “It’s really a watershed moment, I believe, in fusion science and technology,” he says.

The sun in a bottle

Fusion is the process that powers the sun: the merger of two small atoms to make a larger one, releasing prodigious amounts of energy. But the process requires temperatures far beyond what any solid material could withstand. To capture the sun’s power source here on Earth, what’s needed is a way of capturing and containing something that hot — 100,000,000 degrees or more — by suspending it in a way that prevents it from coming into contact with anything solid.

That’s done through intense magnetic fields, which form a kind of invisible bottle to contain the hot swirling soup of protons and electrons, called a plasma. Because the particles have an electric charge, they are strongly controlled by the magnetic fields, and the most widely used configuration for containing them is a donut-shaped device called a tokamak. Most of these devices have produced their magnetic fields using conventional electromagnets made of copper, but the latest and largest version under construction in France, called ITER, uses what are known as low-temperature superconductors.

The major innovation in the MIT-CFS fusion design is the use of high-temperature superconductors, which enable a much stronger magnetic field in a smaller space. This design was made possible by a new kind of superconducting material that became commercially available a few years ago. The idea initially arose as a class project in a nuclear engineering class taught by Whyte. The idea seemed so promising that it continued to be developed over the next few iterations of that class, leading to the ARC power plant design concept in early 2015. SPARC, designed to be about half the size of ARC, is a testbed to prove the concept before construction of the full-size, power-producing plant. 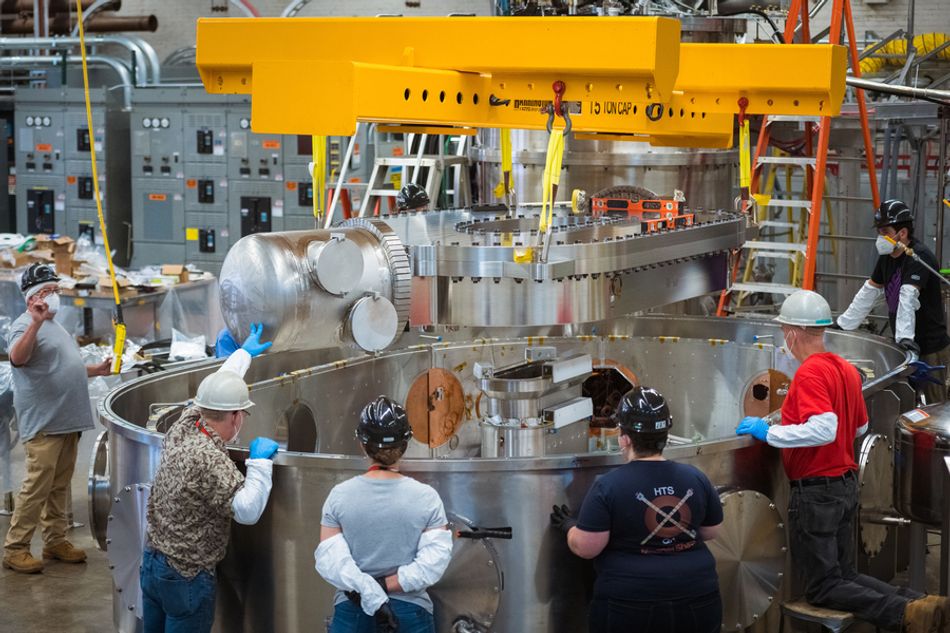 A team of engineers and scientists from CFS and MIT’s PSFC lower the superconducting magnet into the test stand in which the magnet was cooled and powered to produce a magnetic field of 20 tesla. Credits: Gretchen Ertl, CFS/MIT-PSFC, 2021

Until now, the only way to achieve the colossally powerful magnetic fields needed to create a magnetic “bottle” capable of containing plasma heated up to hundreds of millions of degrees was to make them larger and larger. But the new high-temperature superconductor material, made in the form of a flat, ribbon-like tape, makes it possible to achieve a higher magnetic field in a smaller device, equaling the performance that would be achieved in an apparatus 40 times larger in volume using conventional low-temperature superconducting magnets. That leap in power versus size is the key element in ARC’s revolutionary design.

The use of the new high-temperature superconducting magnets makes it possible to apply decades of experimental knowledge gained from the operation of tokamak experiments, including MIT’s own Alcator series. The new approach, led by Zach Hartwig, the MIT principal investigator and the Robert N. Noyce Career Development Assistant Professor of Nuclear Science and Engineering, uses a well-known design but scales everything down to about half the linear size and still achieves the same operational conditions because of the higher magnetic field.

A series of scientific papers published last year outlined the physical basis and, by simulation, confirmed the viability of the new fusion device. The papers showed that, if the magnets worked as expected, the whole fusion system should indeed produce net power output, for the first time in decades of fusion research.

Martin Greenwald, deputy director and senior research scientist at the PSFC, says unlike some other designs for fusion experiments, “the niche that we were filling was to use conventional plasma physics, and conventional tokamak designs and engineering, but bring to it this new magnet technology. So, we weren’t requiring innovation in a half-dozen different areas. We would just innovate on the magnet, and then apply the knowledge base of what’s been learned over the last decades.”

That combination of scientifically established design principles and game-changing magnetic field strength is what makes it possible to achieve a plant that could be economically viable and developed on a fast track. “It’s a big moment,” says Bob Mumgaard, CEO of CFS. “We now have a platform that is both scientifically very well-advanced, because of the decades of research on these machines, and also commercially very interesting. What it does is allow us to build devices faster, smaller, and at less cost,” he says of the successful magnet demonstration.

Proof of the concept

Bringing that new magnet concept to reality required three years of intensive work on design, establishing supply chains, and working out manufacturing methods for magnets that may eventually need to be produced by the thousands.

“We built a first-of-a-kind, superconducting magnet. It required a lot of work to create unique manufacturing processes and equipment. As a result, we are now well-prepared to ramp-up for SPARC production,” says Joy Dunn, head of operations at CFS. “We started with a physics model and a CAD design, and worked through lots of development and prototypes to turn a design on paper into this actual physical magnet.” That entailed building manufacturing capabilities and testing facilities, including an iterative process with multiple suppliers of the superconducting tape, to help them reach the ability to produce material that met the needed specifications — and for which CFS is now overwhelmingly the world’s biggest user.

They worked with two possible magnet designs in parallel, both of which ended up meeting the design requirements, she says. “It really came down to which one would revolutionize the way that we make superconducting magnets, and which one was easier to build.” The design they adopted clearly stood out in that regard, she says.

In this test, the new magnet was gradually powered up in a series of steps until reaching the goal of a 20 tesla magnetic field — the highest field strength ever for a high-temperature superconducting fusion magnet. The magnet is composed of 16 plates stacked together, each one of which by itself would be the most powerful high-temperature superconducting magnet in the world. 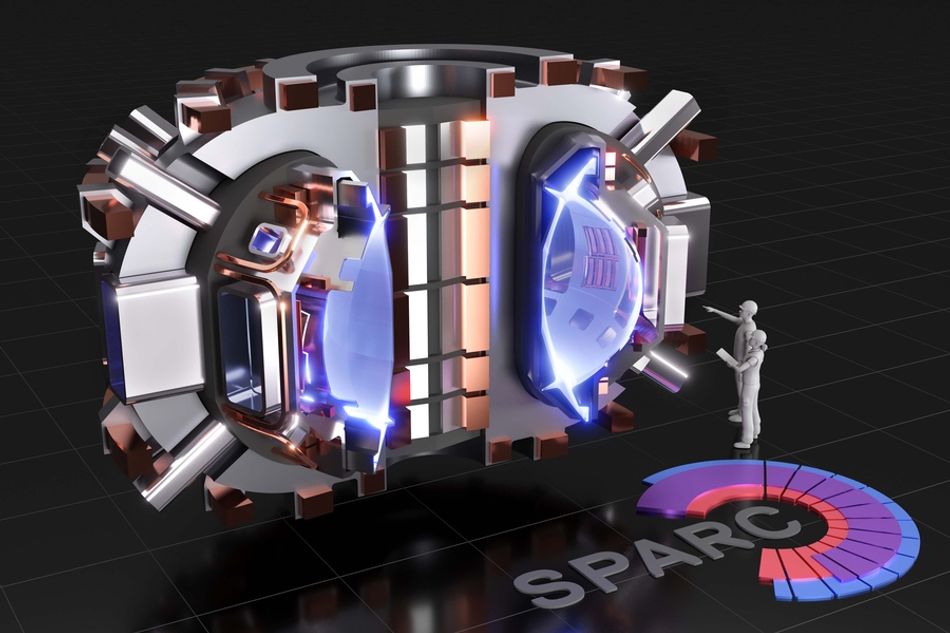 Caption:Rendering of SPARC, a compact, high-field, tokamak, currently under design by a team from the Massachusetts Institute of Technology and Commonwealth Fusion Systems. Its mission is to create and confine a plasma that produces net fusion energy. Credits: T. Henderson, CFS/MIT-PSFC, 2020

“Three years ago we announced a plan,” says Mumgaard, “to build a 20-tesla magnet, which is what we will need for future fusion machines.” That goal has now been achieved, right on schedule, even with the pandemic, he says.

Citing the series of physics papers published last year, Brandon Sorbom, the chief science officer at CFS, says “basically the papers conclude that if we build the magnet, all of the physics will work in SPARC. So, this demonstration answers the question: Can they build the magnet? It’s a very exciting time! It’s a huge milestone.”

The next step will be building SPARC, a smaller-scale version of the planned ARC power plant. The successful operation of SPARC will demonstrate that a full-scale commercial fusion power plant is practical, clearing the way for rapid design and construction of that pioneering device can then proceed full speed.

Zuber says that “I now am genuinely optimistic that SPARC can achieve net positive energy, based on the demonstrated performance of the magnets. The next step is to scale up, to build an actual power plant. There are still many challenges ahead, not the least of which is developing a design that allows for reliable, sustained operation. And realizing that the goal here is commercialization, another major challenge will be economic. How do you design these power plants so it will be cost effective to build and deploy them?”

Someday in a hoped-for future, when there may be thousands of fusion plants powering clean electric grids around the world, Zuber says, “I think we’re going to look back and think about how we got there, and I think the demonstration of the magnet technology, for me, is the time when I believed that, wow, we can really do this.”

The successful creation of a power-producing fusion device would be a tremendous scientific achievement, Zuber notes. But that’s not the main point. “None of us are trying to win trophies at this point. We’re trying to keep the planet livable.”

Power plant technology center MoNiKa: Researchers and industry are working on technologies for the energy-efficient conversion of low-temperature heat into electricity

A new, highly sensitive system for detecting the production of hydrogen gas may play an important role in the quest to develop hydrogen as an environmentally friendly and economical alternative to fossil fuels, according to Penn State scientists.