This prototype sensor, pictured by Mark Stone at the University of Washington, disperses itself on the wind and harvests sunlight for energy.

Created by a team at the University of Washington and inspired by nature, these microgram-weight sensor systems can be deployed by simply scattering them into the wind — just like the dandelion seed.

The idea of widely-deployed sensor networks, capable of providing vast amounts of useful data over a broad area, is an attractive one — but one which has two key issues to resolve: Powering the devices, and distributing them.

A team of researchers at the University of Washington have come up with a potential solution to both problems, taking a leaf from nature to do so: Ultra-light devices, inspired by the dandelion seed, which distribute themselves on the wind and operate entirely through harvested solar energy without a battery in sight.

“The way dandelion seed structures work is that they have a central point and these little bristles sticking out to slow down their fall,” explains lead author Vikram Iyer, assistant professor at the University of Washington, of the reason dandelion seeds were of interest. “We took a 2D projection of that to create the base design for our structures.”

The resulting device, built from Dupont Kapton polyimide film laser-cut from computer-generated patterns inspired by nature, is somewhat taller than its natural inspiration but works in much the same way. Curved in a 3D-printed housing and finished with tape, these porous structures work in much the same way as a parachute — but create a stable vortex of air above themselves as they fall, increasing drag noticeably compared with a solid structure yet using considerably less material than a traditional parachute.

Another key aspect of the design: The ability to cut each with a varied morphology. Given absolutely identical devices deployed at the same time in the same area and with the same weather conditions, the tiny sensor systems would tend to cluster around a single area. Sensor networks provide the best data when widely dispersed, however — giving the researchers the idea to alter the shape of each so that they would travel different distances once deployed.

Mimicking a dandelion seed, however, does bring one drawback: Exactly like its natural inspiration the device has a very limited payload, carrying an absolute maximum of 70mg — a very tight envelope in which to fit power, sensor, computation, and communication hardware.

In the initial prototypes, the payload is attached to the distribution system via double-sided tape — though the team notes it could be integrated directly in future. Manufactured on a flexible substrate, there are six key components: Three tiny solar panels operating in series, a capacitor for energy storage, a combined temperature and humidity sensor, an ambient light sensor, a radio-frequency switch for communication, and a start-up circuit.

The latter is key to addressing power-on current requirements, where the on-board microcontroller will draw considerably above its usual operating energy in order to prepare itself for operation from a cold-boot. “We’ve got this little circuit that will measure how much energy we’ve stored up,” Iyer explains, “and, once the sun is up and there is more energy coming in, it will trigger the rest of the system to turn on because it senses that it’s above some threshold.”

The decision to use an off-the-shelf microcontroller — a Microchip ATiny20 — was a deliberate choice over an application-specific integrated circuit (ASIC) design. Using a microcontroller, the team notes, “creates a highly accessible platform for researchers with diverse backgrounds to build on and rapidly prototype new applications at millimeter-scale without the considerable time, expense and expertise required to design custom silicon.” 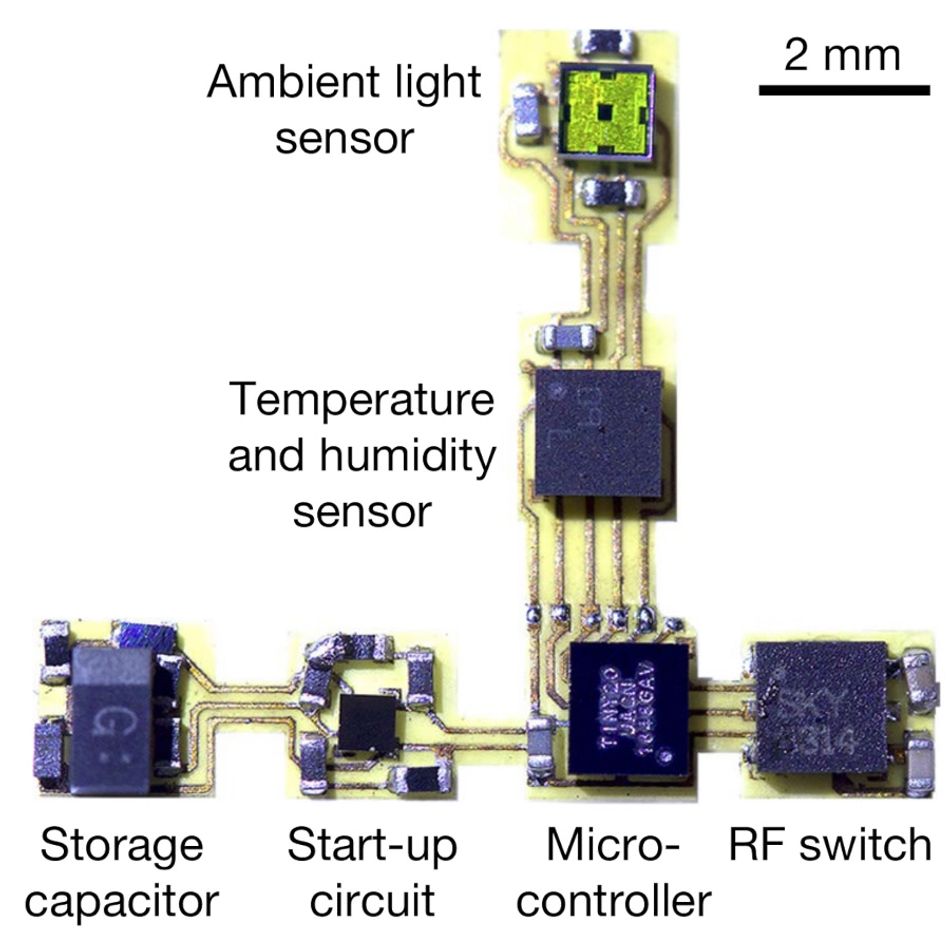 The final prototype comes in at just 28.4mg, yet offers a range of functionality. In testing, the prototypes — deployed at various heights and being carried by the wind up to the length of a football field and landing solar-panels-up around 95 per cent of the time — were able to provide environmental monitoring, while variants with differing sensor payloads could detect nearby vehicles using magnetometers or measure wind speed with an on-board accelerometer. In all cases, data is communicated back to a central receiver using a backscatter radio system — designed specifically for the relatively limited resources of the on-board microcontroller.

"We show that you can use off-the-shelf components to create tiny things," says Shyam Gollakota, professor and senior author of the paper. "Our prototype suggests that you could use a drone to release thousands of these devices in a single drop. They’ll all be carried by the wind a little differently, and basically you can create a 1,000-device network with this one drop."

“This is just the first step, which is why it’s so exciting,” Iyer claims of his team’s work. “There are so many other directions we can take now — such as developing larger-scale deployments, creating devices that can change shape as they fall, or even adding some more mobility so that the devices can move around once they are on the ground to get closer to an area we’re curious about."

One key area for improvement: Ensuring that the devices, no matter how small, don’t pollute the environment once they’ve outlived their usefulness. For this, the team has a couple of suggestions: Producing the drag-creating portion from biodegradable material, and fitting magnets which would allow a vehicle to automatically collect the electronics package for recycling or reuse — potentially using the backscatter radio or an additional non-linear diode as a means of locating each device to speed the collection process. 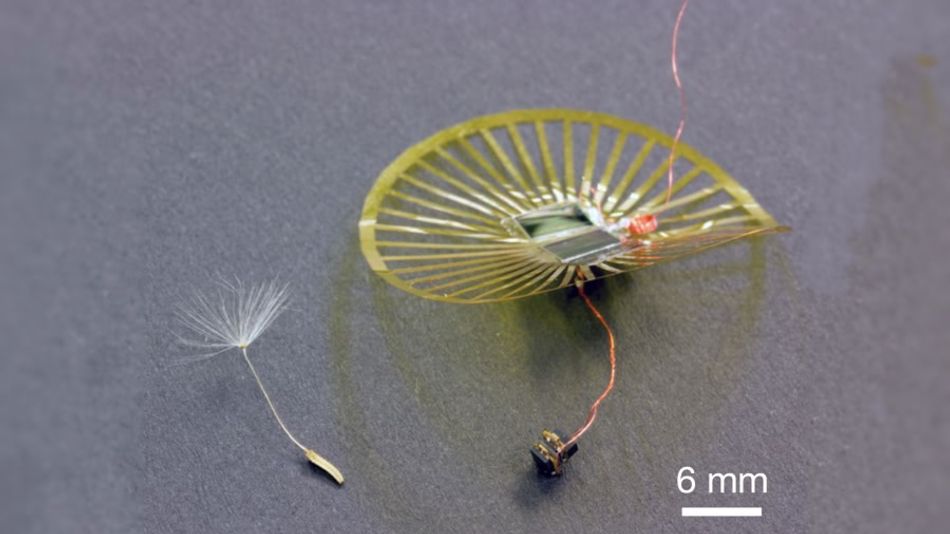 The prototype devices proved deployable over a wide area from a low-flying drone, and landed with the solar panels facing upwards around 95 per cent of the time.

Another route for improvement would be in allowing the devices to steer their descent, to better ensure even coverage and reasonable spacing during deployment — and to help the solar panels track the sun for better harvesting, or to aim a sensor in a specific direction, once deployed. This, the team admits, would require more energy — which could be supplied by adding the ability to harvest energy from radio waves, potentially transmitted from the same drone which deployed the devices in the first place.

Finally, the team suggests that additional research could be put into the radio side of the project — in part to resolve issues with network collisions when a large number of devices are deployed into a relatively small area but also to investigate the possibility of having the devices act as a mesh network. “An abnormally high temperature indicating a fire could trigger a sensor to send an alarm signal that propagates through a network,” the researchers explain, “[and] could further be augmented through integration with other sensing modules such as electrochemical gas sensors and cameras.”

Researchers from Texas A&M University believe the next generation of offshore energy lies in the development of a synergistic combination of several renewable energy production methods, set atop a floating offshore platform.