What Is Our Technology?

As government space agencies and private space exploration companies plan missions to Mars, engineers are looking at ways to convert Martian raw materials into useful products, a process known as in-situ resource utilisation (ISRU). Local production of materials will be a key enabler to future Mars missions, considering it takes around 225 tonnes of rocket fuel to deliver a single tonne of any material (including fuel) to the Martian surface. Recent advances in electro and plasma catalysis have created new opportunities for using electricity to drive industrially important chemical processes.

On Earth these processes can be coupled with renewable energy sources to decarbonise dirty industrial processes and store energy, an approach collectively known as power-to-X (P2X). In 2021 the MOXIE experiment aboard the NASA Perseverance rover successfully converted carbon dioxide from the Martian atmosphere into carbon monoxide (a useful intermediate) and breathable oxygen, demonstrating Martian ISRU for the first time. Our group has proposed an integrated Martian ISRU system based on P2X technology, which aims to reliably supply a range of critical materials for a long-duration Mars mission.

NASA has identified water, oxygen, and buffer gases (for life support), along with methane (for rocket fuel) as primary targets for Martian ISRU technology. The reliable production of water and oxygen for life support systems on Mars will be a key enabler for long-duration missions, providing astronauts an alternative to resupply from Earth. The three key sources of raw materials on Mars are water ice (located at the polar regions), atmospheric gases, and regolith.

The Martian atmosphere is 95.3% carbon dioxide, 2.7% nitrogen, and 1.6% argon, with trace amounts of other gases. Martian regolith – the grainy layer of dust and rock that covers the surface – is a rich mixture of mineral oxides including oxides of silicon, aluminium, calcium, magnesium, iron, and titanium. The regolith contains between 1% - 8% water content that can be extracted, whilst the mineral oxides can be refined into breathable oxygen and metal alloys.

P2X technologies such as plasma catalysis reactors, electrolytic cells, and electrocatalytic devices, are well suited to space applications due to their modularity, solid-state design, responsiveness, and capability to operate at lower temperatures and pressures compared to conventional chemical plants on Earth. Being electrically driven, they can also be integrated into the power grid of a Martian base, which will likely be supplied by a combination of solar photovoltaics and radioisotope thermoelectric generators.

To approach the system-level design of an integrated ISRU ecosystem, we adopted a ‘building block’ framework whereby raw materials are converted into versatile, small molecules, which can be combined in a variety of ways to form valuable products. Figure 1 shows how four key input materials, namely carbon dioxide, nitrogen, water (from ice and hydrated regolith), and mineral oxides, can be used to produce a wide range of commodities supporting manufacturing, agriculture, sanitation, life support, and ascent propellant. A key building block will be methanol, which can be synthesised from carbon dioxide and hydrogen, allowing the synthesis of a range of hydrocarbon-based materials. 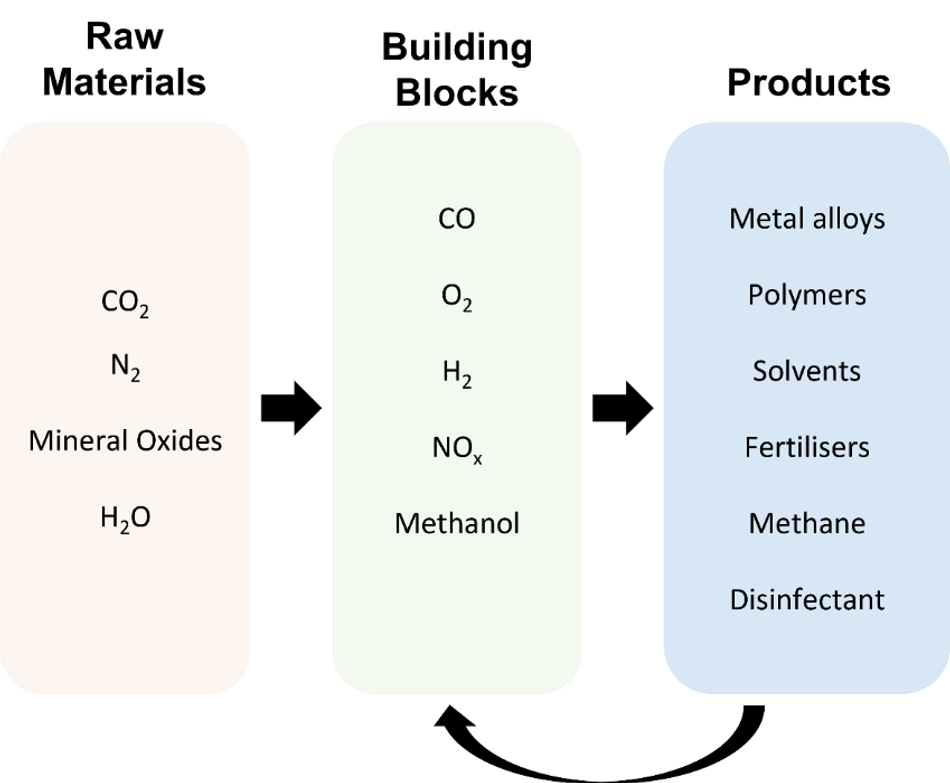 We took the building block concept and explored what it might look like in practice, considering the various process material streams and aiming to incorporate recycling where possible. Figure 2 shows our proposed concept for an integrated ISRU system, facilitating the production of the key commodities discussed above. Hydrogen could be produced from the electrolysis of water and combined with atmospheric carbon dioxide to produce methane for rocket propellant, and methanol to produce solvents and polymers. Molten oxide electrolysis (MOE) – the process of heating regolith until it becomes molten and applying an electric current to separate the metals from the oxygen – could be used to produce metal alloys and oxygen gas.

Oxygen produced from both MOE and water electrolysis would find applications in life support, as an oxidant for rocket fuel, and in the production of synthetic fertiliser when combined with atmospheric nitrogen through plasma-catalytic nitrogen fixation. This proposed system considers recycling at the molecular level, for example with carbon dioxide from human exhalation collected and converted into breathable oxygen and a source of carbon atoms, for various processes. A similar technology was used on the international space station for several years from 2010 to convert exhaled carbon dioxide and waste hydrogen into drinkable water and methane (which was vented), using the thermochemical Sabatier process.

Figure 2: A concept design for an integrated ISRU system using a variety of technologies

What are some applications of our technology?

The applications for this technology are not limited to a Martian settlement but may also form the basis of establishing a Lunar refuelling station to facilitate trips to Mars and the wider solar system. Closer to home, this technology can help remote communities in harsh conditions be less reliant on expensive resupply (think Antarctic bases, sea platforms, and even remote towns).

When combined with abundant and cheap renewable energy, electrically driven chemical process technology (P2X) like this could facilitate a shift away from globe-spanning supply chains and towards decentralised production. One of the most attractive examples of this P2X technology on Earth is the localised production of ‘green’ fertiliser, which may finally allow the global economy to transition away from the extremely polluting Haber-Bosch process, which generates more greenhouse gases than any other industrial chemical process in the world and is responsible for around 1% of global carbon dioxide emissions.

Dr Mark Baldry is a researcher at the University of Sydney, Australia. Dr Baldry's work focuses on leveraging the potential of multiphysics modelling to invent new technology to solve leading challenges in energy, medicine, and space travel.