This photograph shows a metal electrode (the textured inner circle) on a grey disc of solid electrolyte. After being tested through many charging-discharging cycles, the electrolyte shows the beginnings of dendrite formation on its surface. Credits:Courtesy of the researchers

As researchers push the boundaries of battery design, seeking to pack ever greater amounts of power and energy into a given amount of space or weight, one of the more promising technologies being studied is lithium-ion batteries that use a solid electrolyte material between the two electrodes, rather than the typical liquid.

But such batteries have been plagued by a tendency for branch-like projections of metal called dendrites to form on one of the electrodes, eventually bridging the electrolyte and shorting out the battery cell. Now, researchers at MIT and elsewhere have found a way to prevent such dendrite formation, potentially unleashing the potential of this new type of high-powered battery.

The findings are described in the journal Nature Energy, in a paper by MIT graduate student Richard Park, professors Yet-Ming Chiang and Craig Carter, and seven others at MIT, Texas A&M University, Brown University, and Carnegie Mellon University. 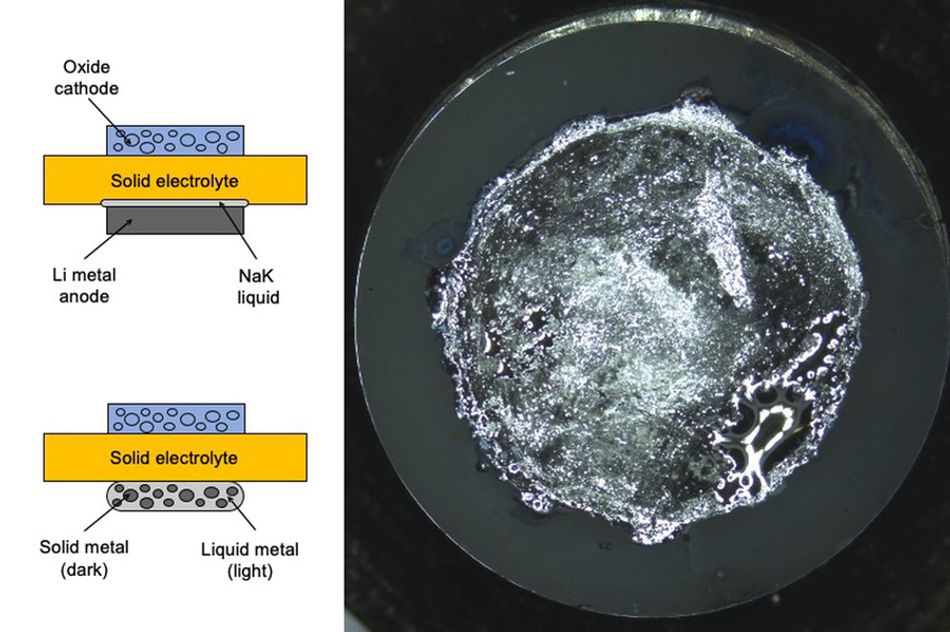 Solid state batteries only make sense with metal electrodes, he says, but attempts to develop such batteries have been hampered by the growth of dendrites, which eventually bridge the gap between the two electrode plates and short out the circuit, weakening or inactivating that cell in a battery.

It’s been known that dendrites form more rapidly when the current flow is higher — which is generally desirable in order to allow rapid charging. So far, the current densities that have been achieved in experimental solid-state batteries have been far short of what would be needed for a practical commercial rechargeable battery. But the promise is worth pursuing, Chiang says, because the amount of energy that can be stored in experimental versions of such cells, is already nearly double that of conventional lithium-ion batteries.

The team solved the dendrite problem by adopting a compromise between solid and liquid states. They made a semisolid electrode, in contact with a solid electrolyte material. The semisolid electrode provided a kind of self-healing surface at the interface, rather than the brittle surface of a solid that could lead to tiny cracks that provide the initial seeds for dendrite formation.

The idea was inspired by experimental high-temperature batteries, in which one or both electrodes consist of molten metal. According to Park, the first author of the paper, the hundreds-of-degrees temperatures of molten-metal batteries would never be practical for a portable device, but the work did demonstrate that a liquid interface can enable high current densities with no dendrite formation. “The motivation here was to develop electrodes that are based on carefully selected alloys in order to introduce a liquid phase that can serve as a self-healing component of the metal electrode,” Park says. 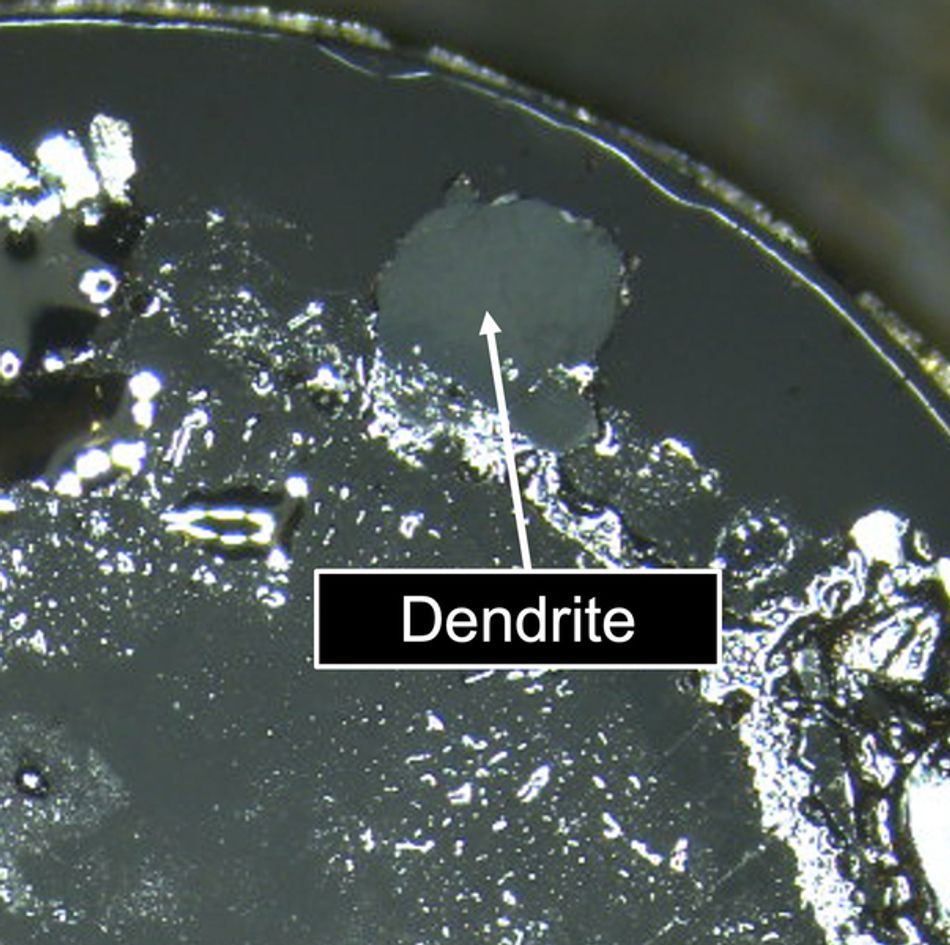 The arrow points to the branch-like dendrite formations on the electrode. Credits:Courtesy of the researchers

The material is more solid than liquid, he explains, but resembles the amalgam dentists use to fill a cavity — solid metal, but still able to flow and be shaped. At the ordinary temperatures that the battery operates in, “it stays in a regime where you have both a solid phase and a liquid phase,” in this case made of a mixture of sodium and potassium. The team demonstrated that it was possible to run the system at 20 times greater current than using solid lithium, without forming any dendrites, Chiang says. The next step was to replicate that performance with an actual lithium-containing electrode.

In a second version of their solid battery, the team introduced a very thin layer of liquid sodium potassium alloy in between a solid lithium electrode and a solid electrolyte. They showed that this approach could also overcome the dendrite problem, providing an alternative approach for further research.

The new approaches, Chiang says, could easily be adapted to many different versions of solid-state lithium batteries that are being investigated by researchers around the world. He says the team’s next step will be to demonstrate this system’s applicability to a variety of battery architectures. Co-author Viswanathan, professor of mechanical engineering at Carnegie Mellon University, says, “We think we can translate this approach to really any solid-state lithium-ion battery. We think it could be used immediately in cell development for a wide range of applications, from handheld devices to electric vehicles to electric aviation.”

“Metal penetration through solid electrolyte separators is a key challenge facing high energy-density batteries, and to date much attention has been directed toward the properties of the separator material through which the metal penetrates,” says Paul Albertus, an associate professor of chemical and biomolecular engineering at the University of Maryland, who was not associated with this research. Noting that the new work focuses instead on the properties of the metal electrode itself, he says the research “is important for both setting scientific priorities for understanding metal penetration, as well as developing innovations to help mitigate this important failure mode.”

An energy-storage solution that flows like soft-serve ice cream

Researchers make the case for a semisolid electrochemical compound as a cost-efficient, grid-scale battery backup for wind and solar power.