A team of researchers led by the University of Pittsburgh (Pitt) has partnerned with Carnegie Mellon University (CMU) and five other institutions to secure a $22 million grant from the Defense Advanced Research Projects Agency (DARPA). The grant will fund the development of a device combining artificial intelligence, bioelectronics, and regenerative medicine to regrow muscle tissue, especially after combat injuries. The project is led by Stephen Badylak, professor of surgery at Pitt and deputy director of the McGowan Institute for Regenerative Medicine.

When more than 20% of a muscle is damaged, as is common for soldiers wounded in recent overseas conflicts, the tissue can’t regenerate, and a stiff scar forms in place of the missing muscle, which often leads to significant disability.

Our patch will allow us to heal large scale wounds in half the time it would take a normal wound, with more than 70% restored functional tissue.

In order to address this issue, the team will be creating a device that would change the environment inside larger wounds to help them heal the way smaller wounds do naturally. Carnegie Mellon’s Tzahi Cohen-Karni will be co-leading the efforts in the first phase of the project that deal with the device’s development.

Smaller, self-healing wounds typically switch from inflammatory to anti-inflammatory conditions a couple of weeks after the initial injury. With the team’s device, they hope to kick larger wounds into anti-inflammatory mode as early as day three or four, and then again a few days later, repeating the cycle until the muscle rebuilds itself, similar to the way fetal wounds heal without forming a scar.

“With these severe injuries, it’s been drilled into us through all of our training that functional muscle replacement is not possible,” says principal investigator Badylak. “The sort of technology we’re developing offers hope where there otherwise would have been no hope.”

All of that would be accomplished by a smart device implanted inside the wound. The device will monitor key molecular signals at each stage of healing—from the first hours after injury to the days and weeks that follow—and deliver specific molecules at specific times under the direction of artificial intelligence. 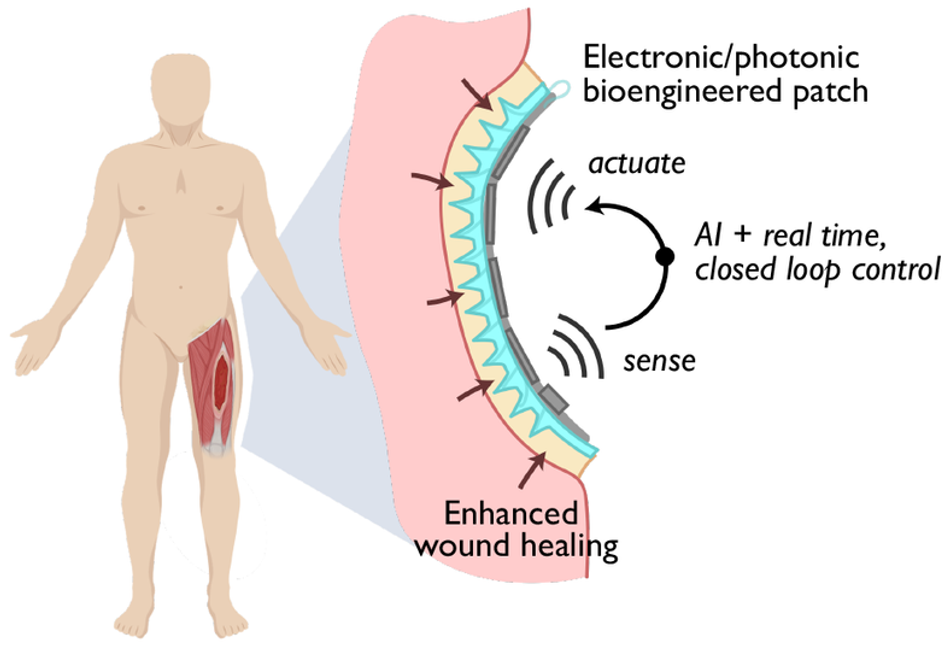 A schematic that shows the bioengineered patch that will allow for enhanced and accelerated wound healing. Source: Jonathan Rivnay

“Think about removing a large chunk of a muscle and then trying to regrow it,” says Cohen-Karni, who is an associate professor of biomedical engineering and materials science and engineering. “Inside muscles are nerves; so in a wound of this size, you would be missing nerves as well, not just muscle tissue. We want large wounds to allow both muscle and nerve regrowth, so instead of leaving scar tissue, we are going to try and recreate the muscle itself.”

This grant awarded by DARPA’s Bioelectronics for Tissue Regeneration program will support the development of the team’s “Regenerative Electronics Platform through Advanced Intelligent Regulation (REPAIR)” project. REPAIR is a convergence of efforts from experts in the field of bioelectronics geared toward healing large volumetric muscle loss with the goal of reaching as close as possible to normal function.

The team is composed of leading experts in bioelectrical sensors and materials science and engineering, photonics, and bioengineering from Carnegie Mellon and Pitt, as well as Northwestern, Rice, University of Vermont, University of Wisconsin, and Walter Reed National Military Medical Center. These institutions will work together collaboratively to allow for continuous monitoring of healing wounds, as well as accelerating the healing process by as much as half the time it would normally take.

“This is an exciting time to be a bioelectronics researcher,” says Cohen-Karni. “Our patch, which will contain electrical sensors, electrical stimulators, optical sensors, cell factories, and hydrogels, will allow us to heal large-scale wounds in half the time it would take a normal wound, with more than 70% restored functional tissue.”

The first two years of the project will involve developing the device, then the next two years will involve close collaboration with surgeons at Walter Reed, who treat patients with major muscle loss, to refine the design so that it’s suitable for the clinic. Meanwhile, the researchers will be working with industry partners and the Food and Drug Administration to identify and clear regulatory hurdles that might slow down clinical translation.

“We’re developing the science and the device in mostly an academic setting,” Badylak says. “If that’s done without consideration of regulatory and industry requirements, patients would never see it because it would remain buried in institutions with no clear path for clinical translation.”

Other researchers on this project include Adam Feinberg of Carnegie Mellon University; Yoram Vodovotz, Ruben Zamora, Douglas Weber, Bryan Brown, Paul Cohen, and Milos Hauskrecht, of Pitt; Jonathan Rivnay, of Northwestern University; Jacob Robinson, Ashok Veeraraghavan, and Omid Veiseh of Rice University; Gary An and Robert Chase Cockrell of the University of Vermont; Peng Jiang of the University of Wisconsin; and Eric Elster and Seth Schobel of Walter Reed.