The SanaHeal bioadhesive is a double-sided tape that could potentially replace sutures, preventing the leakage of blood and reducing the risk of infection, pain, and scarring. Credits:Felice Frankel, Christine Daniloff, MIT

In November, mechanical engineering PhD candidate Hyunwoo Yuk earned the top prize at the Collegiate Inventors Competition hosted by the National Inventor’s Hall of Fame. Yuk was named the graduate winner for his invention SanaHeal, a bioadhesive tape that can easily bind to tissues or organs. The tape could one day be used in place of sutures to promote healing and minimize complications after surgery.

Yuk accepted the prize a few weeks prior to successfully defending his doctoral thesis last December. These accomplishments marked the culmination of a personal journey that has its root in family tragedy.

As he was completing his bachelor’s degree, Yuk received a call that his brother was involved in a horrific accident. He suffered multiple traumatic injuries and required intensive care. Yuk spent the next two years by his brother’s side as he was ushered in and out of operating rooms and intensive care units.

“I’m 10 years older than my little brother, so I view him much like a son. Seeing what he went through was pure pain,” says Yuk.

The years spent with his brother in the hospital gave Yuk insight into the problems and limitations of medical technologies. He started approaching these problems from the perspective of an engineer.

“I believe that personal problems are the best problems for engineers to solve,” adds Yuk. “If there is a chance that I can do something meaningful as an inventor to solve the problems my brother faced, there is no better motivation.”

Before his brother’s accident, Yuk was focused primarily on bioinspired robotics during his undergraduate studies at the Korea Advanced Institute of Science and Technology (KAIST). While serving in the Korean military, Yuk was stationed at a local school to help children with special needs. Working with children with limited motor skills inspired Yuk to apply to MIT for graduate school to build robots for use in rehabilitation.

Shortly after being accepted into MIT’s mechanical engineering graduate program, Yuk received an email from a new faculty member, Xuanhe Zhao, now professor of mechanical engineering and George N. Hatsopoulos (1949) Faculty Fellow. An expert in the field of soft materials, Zhao was looking for a graduate student to take the lead on understanding and design of soft materials, especially hydrogels.

Despite being a complete newcomer to the world of soft materials, Yuk quickly found excitement from the interesting properties of soft materials and their unique potential to bridge artificial machines and devices to the human body. Through their research on how humans and machines interface, Zhao and Yuk began exploring the adhesive properties of hydrogels.

“Adhesion of soft materials, especially hydrogels, greatly attracted our research interests, because the state-of-the-art adhesion of hydrogels was fairly weak and often led to failures,” Zhao says. “In 2015, we proposed the first general strategy to achieve tough adhesion for diverse hydrogels and other materials.”

Like humans, hydrogels are made out of polymers and water. The similarities in mechanical and electrical properties make biological tissue and hydrogels compatible, opening up a world of biomedical applications. Now, Zhao and Yuk could further integrate hydrogels within various materials, devices, and even the human body with unprecedented robustness.

“We gradually started realizing that one major impact of hydrogels and hydrogel adhesion lies in biomedicine, but we needed someone who could help us better understand unmet clinical demands,” explains Yuk.

That role was filled by Christoph Nabzdyk, a critical care physician, cardiothoracic anesthesiologist, and assistant professor at the Mayo Clinic. 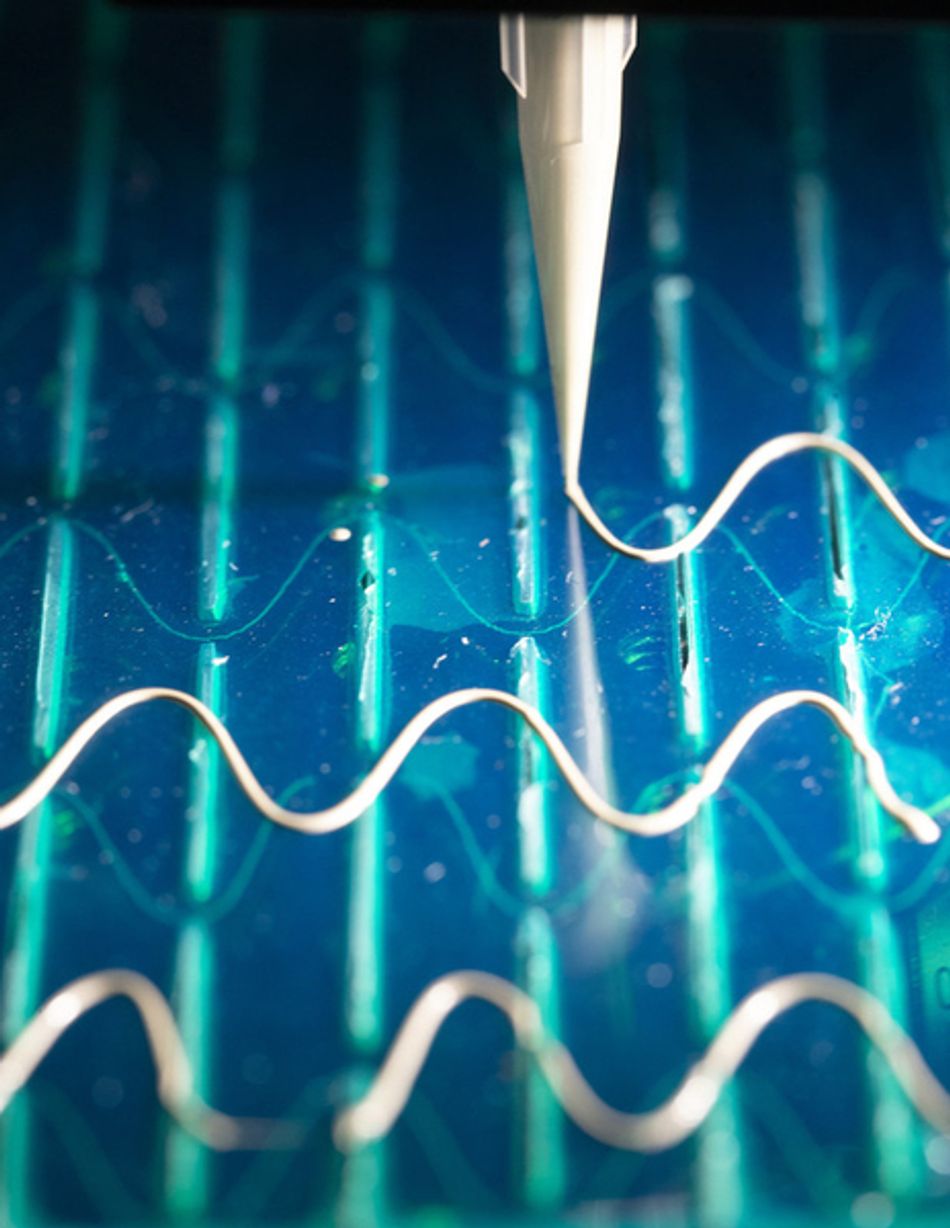 Throughout his graduate studies, Yuk worked with Professor Zhao on a number of applications for interfacing soft materials with the human body. Here, electrically conductive ink based on silver microparticles is being 3D printed on an elastomer sheet with cuts — or kirigami — to prepare an electronic circuit for the smart stretchable bandage that Yuk and Zhao developed. Credits:Photo: John Freidah

In 2017, the research team was approached by Nabzdyk, who at the time was a fellow in critical care medicine and cardiothoracic anesthesiology at Massachusetts General Hospital and Harvard University. Nabzdyk had research experience in wound healing and novel biomaterials. After seeing Zhao present at a conference, Nabzdyk saw an opportunity to apply Zhao and Yuk’s work on bioadhesive hydrogels to tissue and organ healing.

“Despite decades of research, the most common modes of sealing tissue defects are sutures and staples — both rather antiquated and traumatic approaches to tissue approximation,” says Nabzdyk. “The bioadhesive work that Hyunwoo and Xuanhe have been developing has broad implications for various scenarios of organ defect repairs, hemostasis, and implantable adhesive electronics.”

Using Nabzdyk’s connections, Yuk conducted over 30 interviews with surgeons. These interviews with end users reminded Yuk of his two years in hospitals with his brother.

“I realized that so many of the problems my brother experienced, like uncontrollable bleeding and dozens of scars, could possibly have been solved with these hydrogel materials,” adds Yuk.

The research team started exploring the mechanics of sealing wet tissues. Together with Ellen Roche, assistant professor of mechanical engineering, and graduate student Claudia Varela, they created a bioadhesive patch that can seal organs in a matter of seconds. This double-sided tape could potentially replace sutures, preventing the leakage of blood and reducing the risk of infection, pain, and scarring.

“Working on this research is personally very fulfilling. I feel like I have found my purpose as an engineer,” says Yuk.

He admits that to have true impact, the bioadhesive tape needs to move from the laboratory to the operating room.

To navigate the uncharted territory of regulations, standards, and investors, Yuk, Zhao, and Nabzdyk formed a team, named SanaHeal, that sought guidance and seed funding from organizations including the MIT Deshpande Center for Technological Innovation and MIT Venture Mentoring Service. These programs helped Yuk polish his ability to communicate about SanaHeal, a skill set that helped him win the graduate award at the Collegiate Inventors Competition.

In addition to winning at the Collegiate Inventors Competition, Yuk has received a number of accolades including being named one of Forbes 30 Under 30, receiving the Materials Research Society Gold Graduate Student Award, and getting first place at MIT’s de Florez Awards. According to his collaborators, these honors are well-deserved.

“Driven by the genuine need to improve his younger brother’s health, Hyunwoo has been working long hours over the last six-and-a-half years — co-filing over 10 patent applications, leading or co-leading over 15 papers including two in Nature, and motivating and caring for other team members.” Zhao says. “I cannot wait to see how Hyunwoo and SanaHeal will impact his family, other patients, and the world.”

“Hyunwoo stands out even amongst his already brilliant peers. I have not worked with anyone who at such an early stage in their career has had such a long list of academic accomplishments and advanced level of scientific thinking,” Nabzdyk adds. “Despite all his hard work and drive, Hyunwoo himself is a sweet and caring person, a gentle and humble soul.”

With his doctoral studies coming to a close, Yuk is looking to expand SanaHeal so it can have real impact in saving lives or helping those who, like his brother, have suffered traumatic injury.

“It feels like we are ready to step forward to the real battlefield,” he says. “I’ve grown from the mindset of an academic research to someone who is more translationally minded and focused on the social impact our work can have.”

With the help of a 3D printed salt template, ETH researchers have succeeded in producing magnesium scaffolds with structured porosity that are suitable for bioresorbable bone implants.

Tissue engineers create artificial organs and tissues that can be used to develop and test new drugs, repair damaged tissue and even replace entire organs in the human body.