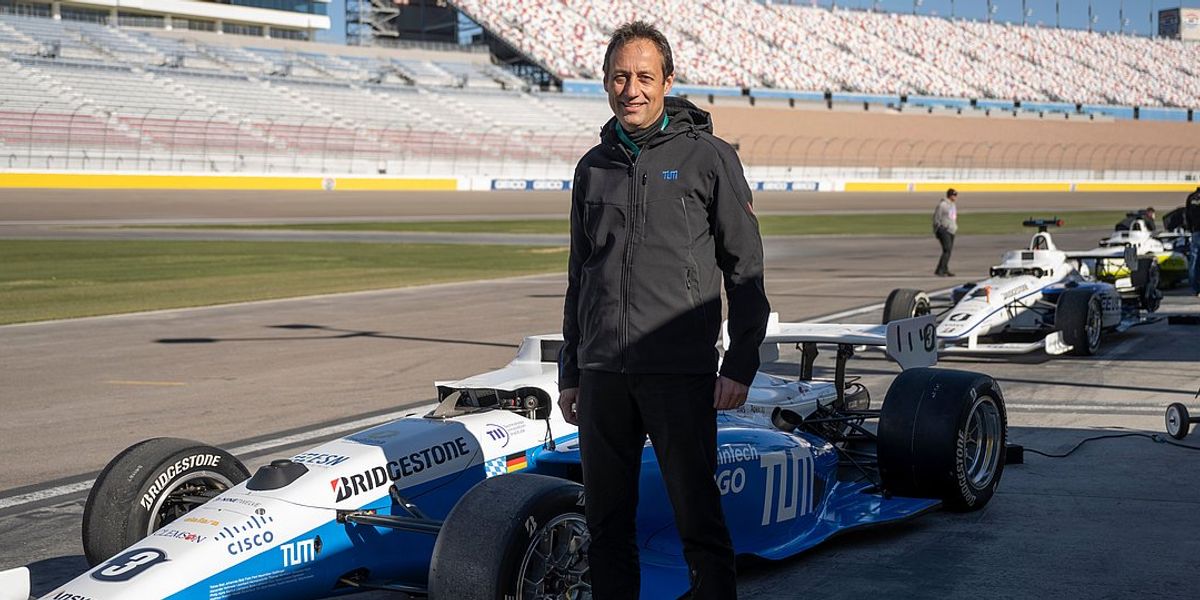 Prof. Lienkamp, what gave you the idea of entering your team in the two Autonomous Challenges in the USA?

The story began back in 2005, as information scientist Sebastian Thrun from Stanford University won the DARPA Grand Challenge, which was until then highly renowned as the only race for autonomous vehicles, held in the Nevada desert. At the time I was working at Volkswagen and built the car for him. Then came the 2007 Urban Challenge in California, a race for autonomous cars on a paved course under realistic traffic conditions, where once again three Volkswagen vehicles from various universities made the finals. Sebastian Thrun then had the idea of staging speed races similar to Formula 1 on a real race track: That was the birth of the Autonomous Challenge concept. And it went without saying that I wanted to participate together with a TUM team.

The autonomous vehicles which are currently being tested for street use already contain an enormous amount of AI. What's the difference between the software you use in the race cars and the systems already in use?

The race track doesn't have traffic laws or points of reference like marked lanes, traffic lights or traffic signs. Ultimately we're dealing with "unpredictable" objects, in our case the other race cars. We have to detect them and make predictions about where they'll move, and that all at speeds of over 250 km/h. We're able to do this because our software doesn't concentrate on strictly complying with traffic regulations, as is the case with other vendors. Instead, our software calculates the probable locations of the other objects which it then uses to calculate the optimum solution for our own movements.

How exactly does your software do that?

Our approach uses conventional sensor technologies with lasers, cameras and radar. The software knows the race course and detects the other vehicles. That means it can predict the most probable trajectory, i.e. what location on the course the other vehicle will move to at what point in time, and can then plan its own movements accordingly. Here the computing speed of the software plays an important role. That's decisive when it comes to safely executing aggressive maneuvers and reacting spontaneously to critical situations.

The fact that we made the software generally available as open source code and thus let other teams work on it was enormously helpful as well. That speeds up the development process so that soon the number of people around the world who will be able to work on our code will surpass the development capacities of all the automobile manufacturers put together. Ultimately, though, the software and the car are only as good as the teams behind them. I have an extraordinarily good team whose members worked very hard and well beyond the call of their normal everyday duties to make this success happen. 15 doctoral candidates moved this entire project ahead over the course of four years, and four team leaders made sure the teams succeeded in the individual phases.

Formula 1 is the best-known auto racing format in the world. Do you think it's possible that Formula 1 will be completely driverless sometime in the future?

That's both a technical and emotional discussion which affects the spectators more than anything else. Fans always like to bond with particular driver personalities and identify with them in competition. When I see the constantly growing enthusiasm for E-Sports, I think at some point we'll see both. In technical terms of course we always have to ask when it will be realistic to actually replace the driver. After our experience in Indianapolis, we believe this could be possible by 2025. We can even imagine sending one of our autonomous cars to a real Formula 1 race to compete against human professionals.

How high do you think the chances are that an autonomously driven car could beat a human driver?

In its present form our software has already reached the level of an amateur driver. When we talk about professional-class races, experience shows we're about half a second behind. So it will probably take a couple more years before our autonomous vehicles are able to beat racing pros. You can compare it to a chess game against the computer: In the beginning the AI was only able to beat hobby players. It took quite a while before it was possible to beat the chess world champion. But it's definitely possible.

After these great successes in Indianapolis and Las Vegas – What comes next?

The competition will pretty much continue to CES next year. We'd like to compete once again. We want to put what we've learned in the races back on the street – for example with an autonomous shuttle during the Oktoberfest. And we've founded our own software company “driveblocks” which is industrializing the whole thing and making it ready for series production. That means our expertise will soon be for sale.

How to Choose the Right LiDAR Sensor for Your Project

A Primer on Lidar for autonomous vehicles

Holography and LIDAR on the cheap with nanoparticle gel

"The machine as an extension of the body"

How to Choose the Right LiDAR Sensor for Your Project

LiDARs have grown in popularity in recent years as better manufacturing techniques and mass production have lowered the price of this technology.

A Primer on Lidar for autonomous vehicles

Autonomous vehicles, the imminent future that everyone is looking towards has implications in day-to-day life of an average joe commuting between work and home, to mission critical life-saving applications.

Holography and LIDAR on the cheap with nanoparticle gel

Magnetic nanoparticles coated in amino acids can modulate light inexpensively at room temperature, and the findings have applications in autonomous vehicles.