Prepa­ra­tions for a drop test, Credit: © DLR. All rights reserved

The Japan Aerospace Exploration Agency (JAXA) Martian Moons eXploration (MMX) mission will have a German-French rover on board when it is launched in 2024. The rover will land on the Martian moon Phobos and explore its surface for approximately three months. Initial landing tests are currently underway at the German Aerospace Center (Deutsches Zentrum für Luft- und Raumfahrt; DLR) Landing and Mobility Test Facility (Lande- und Mobilitätstest Anlage; LAMA) in Bremen. Using a first preliminary development model, the engineers are determining how robust the design of the approximately 25-kilogram rover must be to withstand an impact on the moon's surface after a free fall of about 40 to 100 metres. 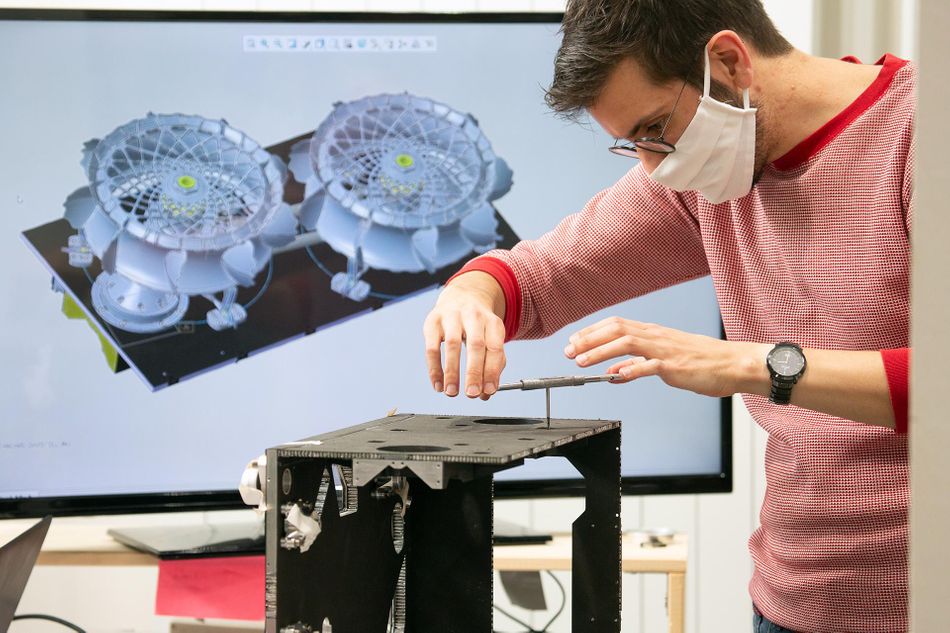 "Under laboratory conditions, we drop the preliminary model of the MMX Rover from a height of five centimetres onto a changeable surface at various angles," explains Test Manager Michael Lange from the DLR Institute of Composite Structures and Adaptive Systems. "In this way, since Phobos has only approximately two thousandths of Earth's gravity at its surface, we can simulate the intensity of the impact for the rover structure." A particular challenge is that the free-falling rover could arrive at the surface in any orientation, possibly also hitting a rock. "To simulate this situation, we are using two hemispheres with diameters of two and nine centimetres that are positioned in a bed of sand, in addition to a flat plate," says Michael Wrasmann from the DLR Institute of Space Systems. "The exact location of the landing on the surface of Phobos is a matter of chance and we are using these analyses to prepare for the various possible scenarios." 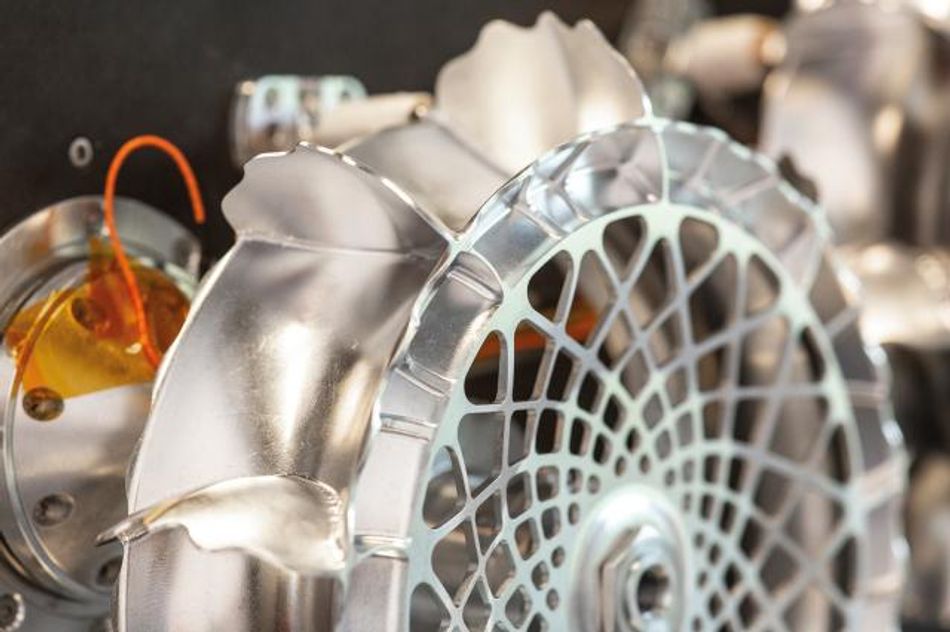 Cores made of aluminium honeycomb

The preliminary test model in the laboratory already resembles the final MMX Rover, with two mounted wheels and two dummy wheels and a mechanical safety system for launch and landing . It is being used to detect and address potential structural weaknesses in as much detail as possible. The rover's 47.5-centimetre by 55-centimetre by 27.5-centimetre housing is a lightweight construction comprising precisely stiffened sandwich components with outer layers made of carbon-fibre-reinforced polymers (CFRP) and cores made of aluminium honeycomb. In addition to the laboratory tests, extensive computer simulations are also being carried out to cover a wide range of other landing situations. In order to improve the accuracy of the mechanical simulation model, tests on the vibration behaviour of the rover structure are also being carried out as part of the campaign. The findings of the experiments will help the researchers to define the design of the MMX Rover in more detail. "In 2021, we plan to test a significantly more representative structural model equipped with all the components of the motion system. This consists of four wheels attached to movable legs and a foldable mechanism at the rear of the rover. If the rover lands on its side, this mechanism will bring it into a position where it can autonomously move into the final driving orientation and deploy its solar panels," explains DLRs overall Project Manager for the MMX Rover, Markus Grebenstein from DLR’s Robotics and Mechatronics Center (RMC) in Oberpfaffenhofen. 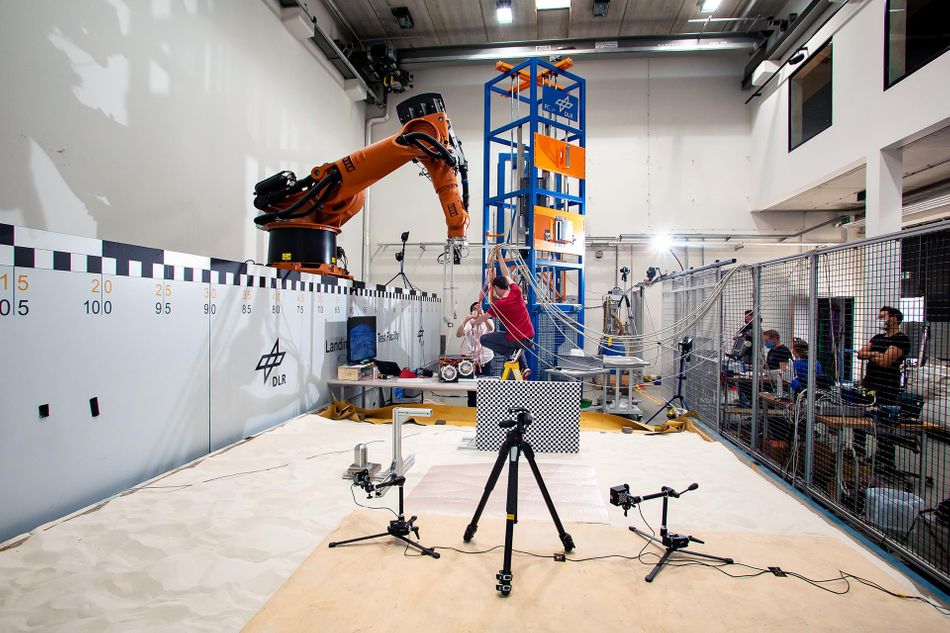 In addition to the structural stresses caused by the landing, the rover will be exposed to extreme environmental conditions. Phobos heats up from -150 to +50 degrees Celsius within a day-night cycle that lasts just over seven hours. The interior of the rover must be actively maintained at a comparatively constant temperature to ensure the quality of the scientific measurements. “For this reason, extensive tests of the temperature behaviour of the rover will also be carried out in 2021 using a thermal model,” Grebenstein continues.

The launch of the rover with the JAXA Martian Moons eXploration (MMX) mission is scheduled for 2024, with insertion into Mars orbit in 2025. The mission's targets are the two moons Phobos and Deimos, which might be asteroids captured by the Red Planet or may have formed as a result of the collision of a larger body with Mars. The formation mechanism of the Mars, Phobos and Deimos system is one of the keys to a better understanding of planet formation in the Solar System. The landing of the MMX rover as part of the mission is planned for late 2026 or early 2027. It will spend approximately 100 days analysing the surface properties of the Martian moon in detail and thus contribute to solving the scientific puzzle concerning its origin. 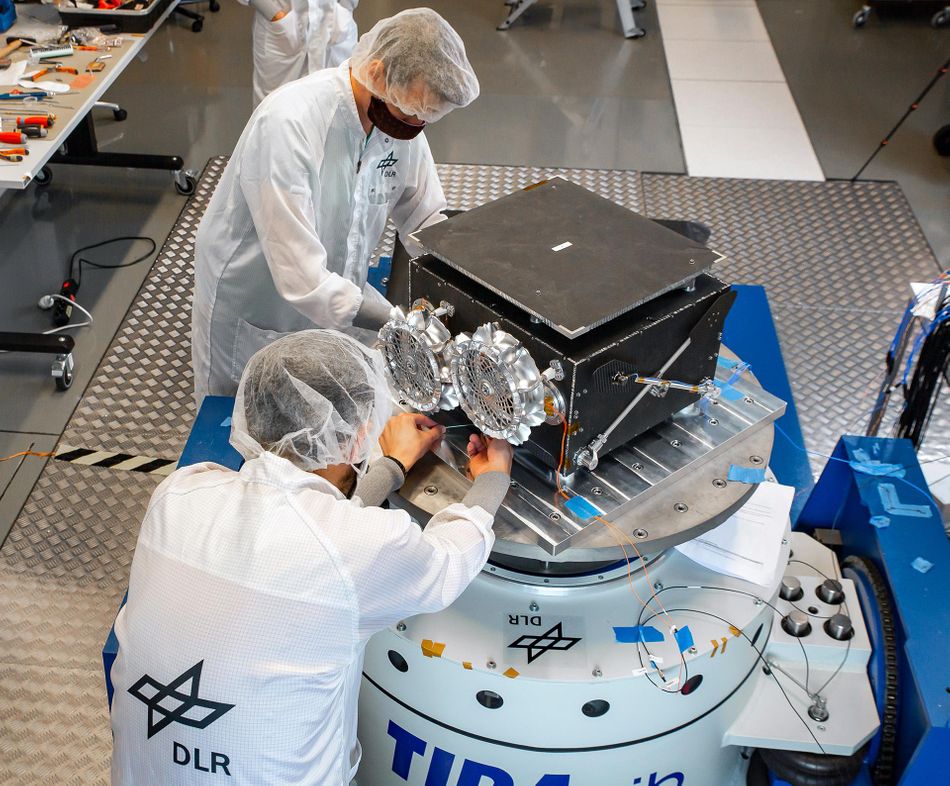 The German-French MMX Rover is being designed and built under the joint management of DLR and CNES (Centre National d'Études Spatiales). DLR is responsible for the development of the rover structure and the entire locomotion system, which also contributes to the reorientation and enables uprighting, as well as two instruments, a Raman spectrometer and a radiometer, each measuring the composition and properties of the surface. CNES is responsible for the camera systems for spatial orientation and exploration on the surface and for the investigation of mechanical soil properties, as well as development of the central service module including the rover's on-board computer and the power and communication system. After landing, the rover will be operated by control centres at DLR and CNES. 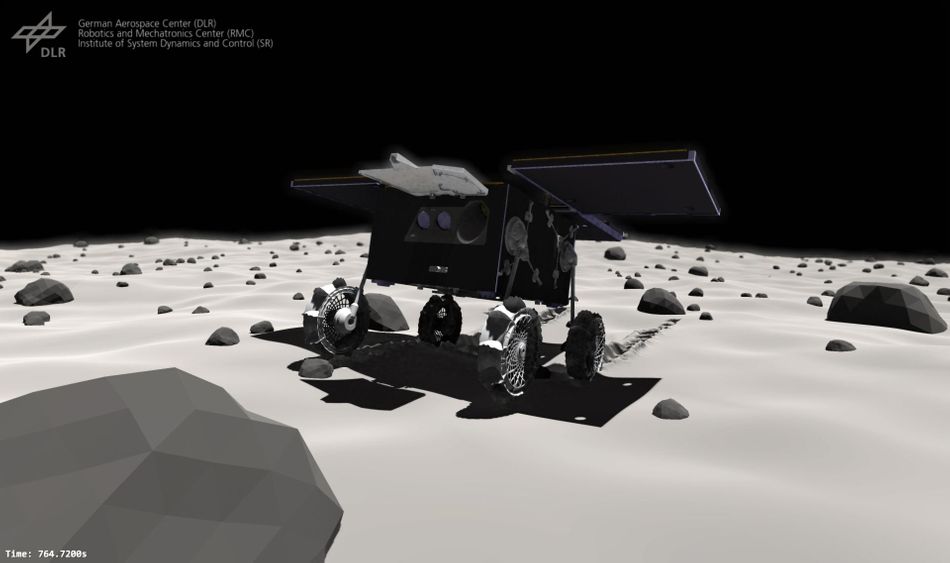 The MMX mission continues the many years of successful collaboration between the partners JAXA, DLR and CNES. It is following in the footsteps its successful predecessor mission, Hayabusa2, in which JAXA sent a spacecraft to the asteroid Ryugu with the German-French Mobile Asteroid Surface Scout (MASCOT) lander on board. On 3 October 2018 MASCOT sent spectacular images back to Earth showing a landscape with large amounts of debris and rocks, but almost no dust – which scientists had expected to find on Ryugu. Hayabusa2 collected samples from Ryugu and is currently bringing them back to Earth. The asteroid samples are contained in a capsule that is scheduled to land in Australia on 6 December 2020 and will then be examined in the laboratory.

The first helicopter attempting to fly on another planet is a marvel of engineering. Get up to speed with these key facts about its plans.

Did you know NASA's next Mars rover has a nearly identical sibling on Earth for testing? Even better, it's about to roll for the first time through a replica Martian landscape.