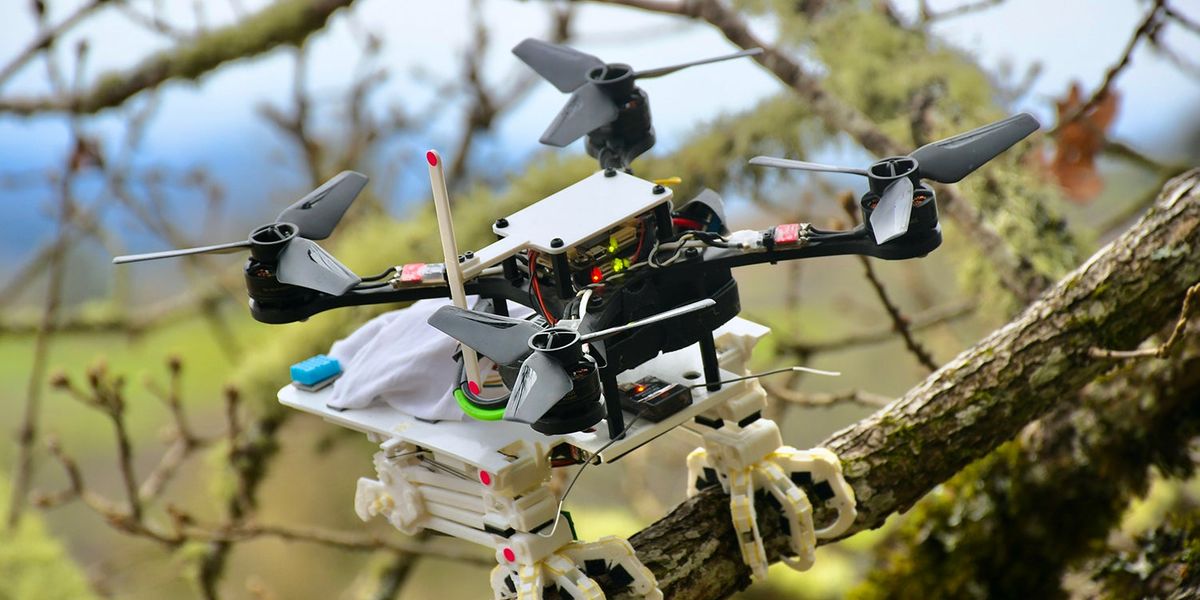 With feet and legs like a peregrine falcon, engineers have created a robot that can perch and carry objects like a bird.

Like snowflakes, no two branches are alike. They can differ in size, shape and texture; some might be wet or moss-covered or bursting with offshoots. And yet birds can land on just about any of them. This ability was of great interest to the labs of Stanford University engineers Mark Cutkosky and David Lentink – now at University of Groningen in the Netherlands – which have both developed technologies inspired by animal abilities.

With feet and legs like a peregrine falcon, engineers have created a robot that can perch and carry objects like a bird.

“It’s not easy to mimic how birds fly and perch,” said William Roderick, PhD ’20, who was a graduate student in both labs. “After millions of years of evolution, they make takeoff and landing look so easy, even among all of the complexity and variability of the tree branches you would find in a forest.”

Years of study on animal-inspired robots in the Cutkosky Lab and on bird-inspired aerial robots in the Lentink Lab enabled the researchers to build their own perching robot, detailed in a paper published Dec. 1 in Science Robotics. When attached to a quadcopter drone, their “stereotyped nature-inspired aerial grasper,” or SNAG, forms a robot that can fly around, catch and carry objects and perch on various surfaces. Showing the potential versatility of this work, the researchers used it to compare different types of bird toe arrangements and to measure microclimates in a remote Oregon forest.

A bird bot in the forest

In the researchers’ previous studies of parrotlets – the second smallest parrot species – the diminutive birds flew back and forth between special perches while being recorded by five high-speed cameras. The perches – representing a variety of sizes and materials, including wood, foam, sandpaper and Teflon – also contained sensors that captured the physical forces associated with the birds’ landings, perching and takeoff.

“What surprised us was that they did the same aerial maneuvers, no matter what surfaces they were landing on,” said Roderick, who is lead author of the paper. “They let the feet handle the variability and complexity of the surface texture itself.” This formulaic behavior seen in every bird landing is why the “S” in SNAG stands for “stereotyped.”

Just like the parrotlets, SNAG approaches every landing in the same way. But, in order to account for the size of the quadcopter, SNAG is based on the legs of a peregrine falcon. In place of bones, it has a 3D-printed structure – which took 20 iterations to perfect – and motors and fishing line stand-in for muscles and tendons.

Each leg has its own motor for moving back and forth and another to handle grasping. Inspired by the way tendons route around the ankle in birds, a similar mechanism in the robot’s leg absorbs landing impact energy and passively converts it into grasping force. The result is that the robot has an especially strong and high-speed clutch that can be triggered to close in 20 milliseconds. Once wrapped around a branch, SNAG’s ankles lock and an accelerometer on the right foot reports that the robot has landed and triggers a balancing algorithm to stabilize it.

During COVID-19, Roderick moved equipment, including a 3D printer, from Lentink’s lab at Stanford to rural Oregon where he set up a basement lab for controlled testing. There, he sent SNAG along a rail system that launched the robot at different surfaces, at predefined speeds and orientations, to see how it performed in various scenarios. With SNAG held in place, Roderick also confirmed the robot’s ability to catch objects thrown by hand, including a prey dummy, a corn hole bean bag and a tennis ball. Lastly, Roderick and SNAG ventured into the nearby forest for some trial runs in the real world.

Overall, SNAG performed so well that next steps in development would likely focus on what happens before landing, such as improving the robot’s situational awareness and flight control.

There are countless possible applications for this robot, including search and rescue and wildfire monitoring; it can also be attached to technologies other than drones. SNAG’s proximity to birds also allows for unique insights into avian biology. For example, the researchers ran the robot with two different toe arrangements – anisodactyl, which has three toes in front and one in back, like a peregrine falcon, and zygodactyl, which has two toes in front and two in back, like a parrotlet. They found, to their surprise, that there was very little performance difference between the two.

For Roderick, whose parents are both biologists, one of the most exciting possible applications for SNAG is in environmental research. To that end, the researchers also attached a temperature and humidity sensor to the robot, which Roderick used to record the microclimate in Oregon.

“Part of the underlying motivation of this work was to create tools that we can use to study the natural world,” said Roderick. “If we could have a robot that could act like a bird, that could unlock completely new ways of studying the environment.”

Lentink, who is senior author of the paper, commended Roderick’s persistence in what proved to be a years-long project. “It was really Will talking with several ecologists at Berkeley six years ago and then writing his NSF Fellowship on perching aerial robots for environmental monitoring that launched this research,” Lentink said. “Will’s research has proven to be timely because there now is a 10 million dollar XPRIZE for this challenge to monitor biodiversity in rainforests.”

Stanford exoskeleton walks out into the real world

The Assured Autonomy Research Initiative, as the project is called, aims to improve the safety and reliability of sUAS by creating a redundant flight control system

Researchers have developed a real-time approach that can help prevent incidents like the large-scale disruption at London’s Gatwick Airport in 2018, where possible drone sightings at the perimeter of the airport caused the cancellation of hundreds of flights.