Flexibly combining different energy storage technologies and connecting the battery modules to the power grid via a grid-friendly inverter - that is the concept of the LeMoStore project. In the newly started joint project, the Karlsruhe Institute of Technology (KIT) is working with partners from science and industry. LeMoStore aims for a maximum service life of the battery modules and a stable power supply with a high proportion of renewable energies. The Federal Ministry of Economics is funding LeMoStore with around 1.7 million euros.

The share of renewable energies in the electricity mix is increasing. Since solar and wind energy fluctuate, i.e. fluctuate due to time and weather, high-performance energy storage systems are required in the public power grid to ensure a stable supply. Conventional concepts with established technologies, such as lithium-ion batteries, combine many battery cells into one large energy store. Similar to photovoltaic systems, this is connected to the power grid via an inverter - an electronic circuit that converts direct current into alternating current.

The research project “Lifetime-Optimized Integration of Modular Energy Storage in Power Grids”, LeMoStore for short, is pursuing a new approach: The concept provides for several small battery modules based on different storage technologies to be flexibly combined and efficiently connected to the power grid via a grid-friendly inverter. "Charging and discharging power are strategically divided in order to achieve the maximum service life of the battery modules and at the same time to meet the application-specific requirements for the power grid," explains Professor Marc Hiller, member of the management team at KIT's Electrotechnical Institute (ETI).

In the joint project LeMoStore, the KIT works with the Technical University of Aschaffenburg (TH AB) and the companies BMZ Germany GmbH and BATEMO GmbH as partners as well as with the companies HBK - Hottinger Brüel & Kjær GmbH, Linde Material Handling GmbH, KION Battery Systems GmbH (KBS) and Mainsite GmbH & Co. KG as associated partners. The project started on June 1, 2021 and is scheduled to run for three years. The Federal Ministry for Economic Affairs and Energy (BMWi) is funding LeMoStore with around 1.7 million euros.

“We are working out a modular construction kit, so to speak, with innovative Power Electronic Storage Blocks (PESB). In this way, battery modules can be combined individually, which enables a high degree of flexibility, ”explains Professor Marc Hiller from KIT. To do this, the researchers use a so-called modular multilevel converter (MMC). This inverter consists of numerous power electronic assemblies. The battery modules integrated in the MMC cells are the core of the research work in the laboratory for power electronics and electrical machines at TH AB. Thanks to the interconnection and control of the PESB, the converter system can convert direct current into alternating current and vice versa with high efficiency. At the same time, the desired power consumption and output of the individual battery modules can be precisely controlled. Used battery modules (for example from electric vehicles) can also be used without reducing the performance of the overall system. Researchers at the South and North Campus of the KIT are jointly developing the control and an optimized energy management system. BMZ Germany GmbH is responsible for the selection, testing and dimensioning of the chemical storage cell for the battery module. BATEMO GmbH is developing a battery model that takes into account the current state of charge and the increasing aging of the batteries in order to operate the entire system as economically as possible. The consortium includes the companies Linde Material Handling GmbH, 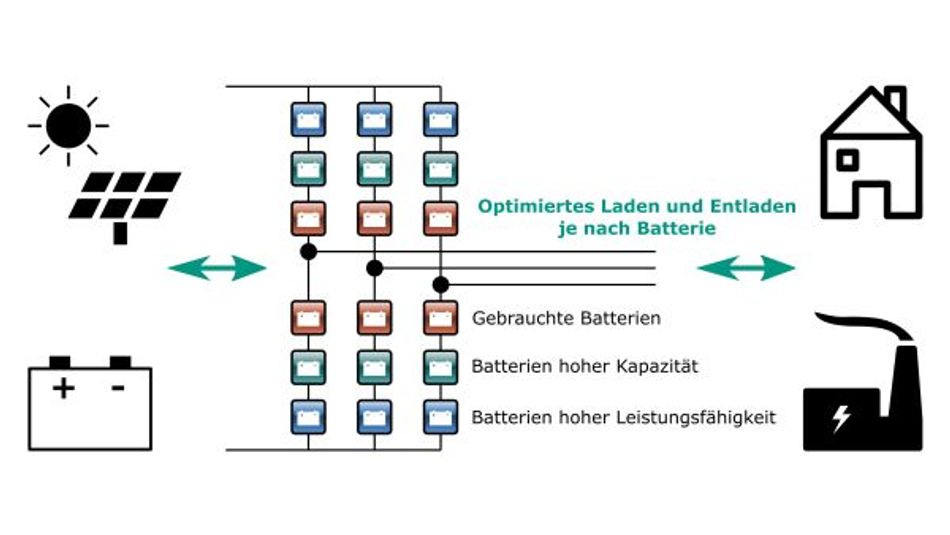 The scientists model an overall system in order to determine the optimal energy distribution in real time. As part of the project, they implement the entire system as a demonstrator. For testing, they use the Power Hardware in the Loop (PHIL) infrastructure, which is part of the Energy Lab 2.0 at KIT. With the help of PHIL emulators, alternating current networks up to 1 kV and direct current networks up to 1.5 kV can be simulated. The realistic network environment can be simulated in the PHIL test environment. The researchers can use it to test the LeMoStore demonstrator in all operating states and to validate and verify its functionality. The precise and highly dynamic measuring technology required for this is provided by the partner HBK - Hottinger Brüel & Kjær GmbH.

The LeMoStore project thus not only shows the additional potential of lithium-ion batteries within the power grid, but also contributes to solutions for the energy transition by realizing the possibilities of an optimized interaction of storage and converter technologies using established hardware.

A 'universal descriptor' will help determine the best chemicals to use, reducing time in the lab — and costs — necessary for the development of new batteries, new research in Vijay Ramani's lab shows

Article 3 of our Energy Storage Solutions series: A state-of-the-art Battery Monitoring System allows you to extract the highest quantity of charge from your battery pack and manage the charge and discharge cycles in a safer way extending battery life.