Lithium-air batteries were thought promising in the 1970s as a potential power source for electric vehicles, offering energy densities that rival gasoline and significantly surpass conventional lithium-ion batteries. However, scientists over the last few decades have been unable to overcome challenges to practical application of this technology, including reversible charging and low cyclability that results in battery degradation over few uses.

A research team from MIT, Harvard University, and Cornell University has found a way to isolate and study one enigmatic molecule that may be responsible for the breakdown of key components in Li-air batteries — lithium superoxide.

“The key to trapping lithium superoxide is by using a confining shell of quinone—a molecule used as an energy carrier in biology,” says Matthew Nava PhD '17, lead author of a paper on the work, published recently in PNAS. Nava, who is now a postdoc at Harvard University working in the laboratory of Patterson Rockwood Professor of Energy Daniel G. Nocera, contributed to the work as a researcher in the lab of Henry Dreyfus Professor of Chemistry Christopher Cummins, who is a senior author of the study; along with Shiyu Zhang from MIT; Katharine Pastore and Kyle Lancaster from Cornell University; and Xiaowen Feng and Daniel Nocera of Harvard. 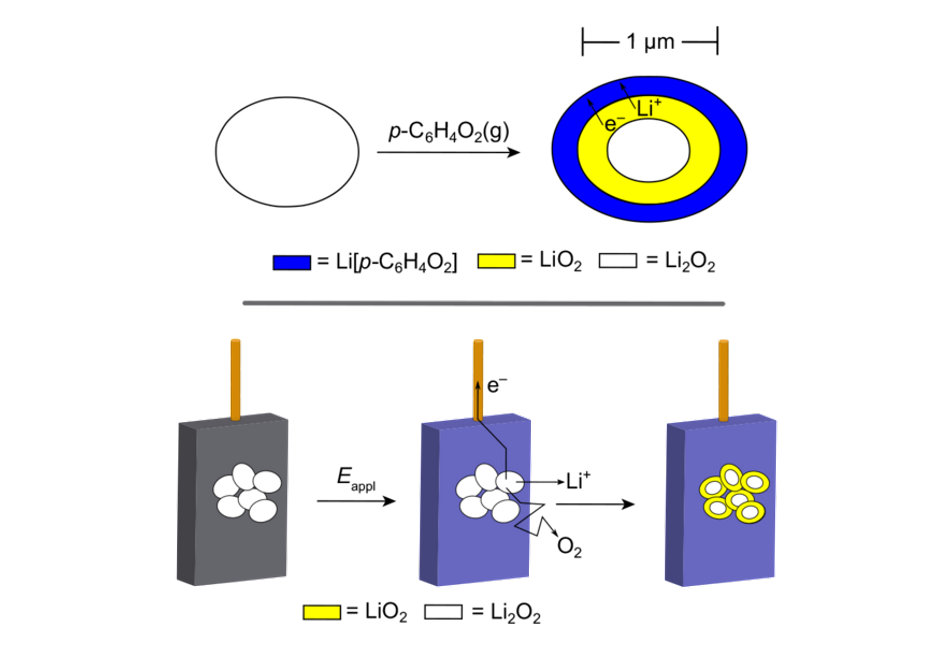 Top panel shows the analogy between the work and a functioning battery, while the bottom shows what happens during the charging of a lithium-air battery. Credits: Photo courtesy of the researchers.

Like many discoveries, this one began as an accident. While a graduate student in the Cummins group, Nava noticed that lithium peroxide turned blue when it got close to quinone, representing a rare color change of two reactant solids. Although they knew that the lithium superoxide intermediate should be present in this new material, it was difficult to prove, as the intermediate was buried in a shell of highly colored quinone, prone to detonation.

Lithium–air batteries operate by electron transfer from a high-surface-area cathode to oxygen gas during discharge, generating lithium peroxide deposits, the crucial storage material for this class of batteries. Lithium superoxide, formed during charging and discharging, is too unstable and short-lived at room temperature for scientists to reliably study; thus, being able to generate and stabilize this crucial intermediate is an important step toward developing a viable lithium-air battery.

“The limited cyclability [of li-air batteries] indicate that our understanding of the metal oxides that form the energy storage unit of these batteries is incomplete,” says Nava. “This work demonstrates how encapsulation or physical confinement with specific materials might be a powerful method to prevent electrolyte and cell degradation in these batteries and increase cell cyclability.”

As the world slowly transitions to renewable energy sources, problems of intermittency and the challenges of converting renewable energy into usable fuels need to be solved. Batteries may play a crucial role in the need for reliable and efficient energy storage, and this discovery may have provided a vital key to unlocking the way forward.

On the road to the super-battery

A research team led by the Technical University of Munich (TUM) has taken an in-depth look at the internal workings of batteries during charging and discharging. Their findings may help optimize charging processes.