NASA’s Dragonfly mission, which will send a rotorcraft relocatable lander to Titan’s surface in the mid-2030s, will be the first mission to explore the surface of Titan, and it has big goals.

On July 19, the Dragonfly science team published “Science Goals and Objectives for the Dragonfly Titan Rotorcraft Relocatable Lander” in The Planetary Science Journal. The paper’s lead author is Jason Barnes, Dragonfly deputy principal investigator and a professor of physics at the University of Idaho.

The goals for Dragonfly include searching for chemical biosignatures; investigating the moon’s active methane cycle; and exploring the prebiotic chemistry currently taking place in Titan’s atmosphere and on its surface. 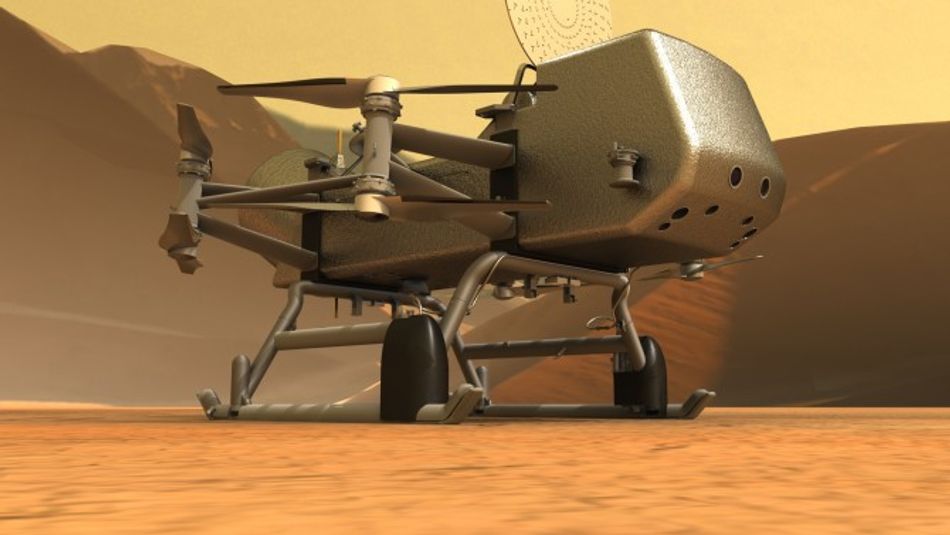 NASA’s Dragonfly mission, which will send a rotorcraft relocatable lander to Titan’s surface in the mid-2030s, will be the first mission to explore the surface of Titan. Johns Hopkins/APL

“Titan represents an explorer’s utopia,” said co-author Alex Hayes, associate professor of astronomy in the College of Arts and Sciences and a Dragonfly co-investigator. “The science questions we have for Titan are very broad because we don’t know much about what is actually going on at the surface yet. For every question we answered during the Cassini mission’s exploration of Titan from Saturn orbit, we gained 10 new ones.”

Though Cassini has been orbiting Saturn for 13 years, the thick methane atmosphere on Titan made it impossible to reliably identify the materials on its surface.  While Cassini’s radar enabled scientists to penetrate the atmosphere and identify Earth-like morphologic structures, including dunes, lakes and mountains, the data could not reveal their composition.

“In fact, at the time Cassini was launched we didn’t even know if the surface of Titan was a global liquid ocean of methane and ethane, or a solid surface of water ice and solid organics,” said Hayes, also director of the Cornell Center for Astrophysics and Planetary Science and the Spacecraft Planetary Image Facility in A&S.

The Huygens probe, which landed on Titan in 2005, was designed to either float in a methane/ethane sea or land on a hard surface. Its science experiments were predominantly atmospheric, because they weren’t sure it would survive the landing. Dragonfly will be the first mission to explore the surface of Titan and identify the detailed composition of its organic-rich surface.

“What’s so exciting to me is that we’ve made predictions about what’s going on at the local scale on the surface and how Titan works as a system,” Hayes said, “and Dragonfly’s images and measurements are going to tell us how right or wrong they are.”

Hayes has been working on Titan for almost the entirety of his career. He’s particularly eager to answer some of the questions raised by Cassini in the area of his specialty: planetary surface processes and surface-atmosphere interactions.

“My primary science interests are in understanding Titan as a complex Earth-like world and trying to understand the processes that are driving its evolution,” he said. “That involves everything from the methane cycle’s interactions with the surface and the atmosphere, to the routing of material throughout the surface and potential exchange with the interior.” 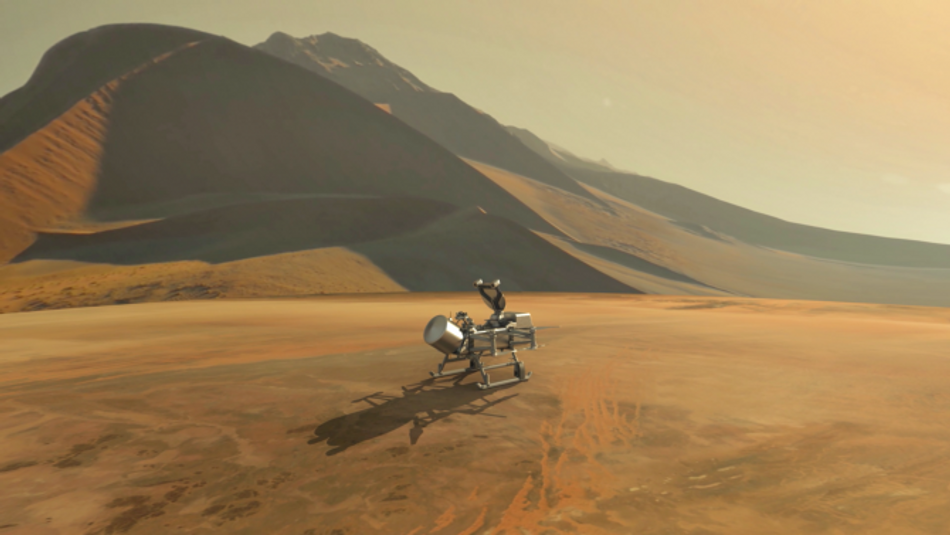 Artist's impression of Dragonfly in flight over Titan. Johns Hopkins/APL

Hayes will be contributing significant expertise in another area as well:  operational experience from Mars rover missions.

“The Dragonfly mission benefits from and represents the intersection of Cornell’s substantial history with rover operations and Cassini science,” Hayes said. “It brings those two things together by exploring Titan with a relocatable moving craft.”

Cornell astronomers are currently involved in the the Mars Science Laboratory and Mars 2020 missions, and led the Mars Exploration Rovers mission. The lessons learned from these rovers on Mars are being relocated to Titan, Hayes said.

Dragonfly will spend a full Titan day (equivalent to 16 Earth days) in one location conducting science experiments and observations, and then fly to a new location. The science team will need to make decisions about what the spacecraft will do next based on lessons from the previous location – “which is exactly what the Mars rovers have been doing for decades,” Hayes said.

Titan’s low gravity (around one-seventh of Earth’s) and thick atmosphere (four times denser than Earth’s) make it an ideal place for an aerial vehicle. Its relatively quiet atmosphere, with lighter winds than Earth, make it even better. And while the science team doesn’t expect rain during Dragonfly’s flights, Hayes noted that no one really knows the local-scale weather patterns on Titan – yet.

Dragonfly’s search for chemical biosignatures will also be wide-ranging. In addition to examining Titan’s habitability in general, they’ll be investigating potential chemical biosignatures, past or present, from both water-based life to that which might use liquid hydrocarbons as a solvent, such as within its lakes, seas or aquifers.

A levitating vehicle might someday explore the moon, asteroids, and other airless planetary surfaces.

Now uncocooned from its protective carbon-fiber shield, the helicopter is being readied for its next steps.