What is our project?

Researchers are continually looking for the fastest, strongest, most efficient, and lowest-cost ways to deploy actuation to carry out their intended functions in the robotic field. To this end, the new field of soft robotics or artificial muscles is currently investigating new actuators ideas that could emulate the properties of muscles that allow for fast adaptability and control in unstructured environments. To fill this void, our research group, Dynamic and Active System Lab (DASL) at Northern Arizona University, has exploited the possibility to create compliant actuators by drawing, twisting, and coiling polymer tubes.

They are named ‘cavatappi’ artificial muscles based on their resemblance to the Italian pasta (see Fig.1). Cavatappi artificial muscles can contract more than 50% of their initial length and exhibits mechanical contractile efficiencies near 45%. They have also been demonstrated to generate a maximum specific work and power of 0.38 kilojoules per kilogram and 1.42 kilowatts per kilogram, respectively. Given the hydraulic or pneumatic activation source, these devices have the potential to substantially outperform similar thermally activated actuation technologies regarding actuation bandwidth, efficiency, modeling and controllability, and practical implementation.

Fig. 1. Cavatappi pasta (A) and the actuators developed (C-H) from the straight drawn polymer tubes (B)

Cavatappi artificial muscles were initially inspired by twisted and coiled polymer actuators (TCPAs), which were revolutionary when they first came out because they were powerful, lightweight, and cheap. But they are very inefficient (approximately two percent) and slow to actuate because they are thermally driven, and temperature is usually a slow driver. For cavatappi, we have got around these shortcomings by twisting and coiling tubes that use pressurized fluid to actuate, making these devices more likely to be adopted and implemented in bioinspired applications. These devices respond about as fast as the fluid can enter the actuators. However, the significant advantage is their efficiency. It has been demonstrated an actuator contractile efficiency of up to about 45% and a total system efficiency of 21%, which is a high number in soft actuation.

These tubes can be configured as torsional actuators (Fig. 2B) when twisted or linear actuators when helically coiled (Fig. 2C), similar to TCPAs. This asymmetric behavior of cavatappi is related to the microstructure of the material. After drawing (anisotropy enhancement) (see Fig. 2A) and twisting (internal fibers reorientation), hydraulic or pneumatic pressure applied inside the tube, results in localized untwisting of the helical microstructure. This untwisting manifests as a contraction of the helical pitch for the coiled configuration. 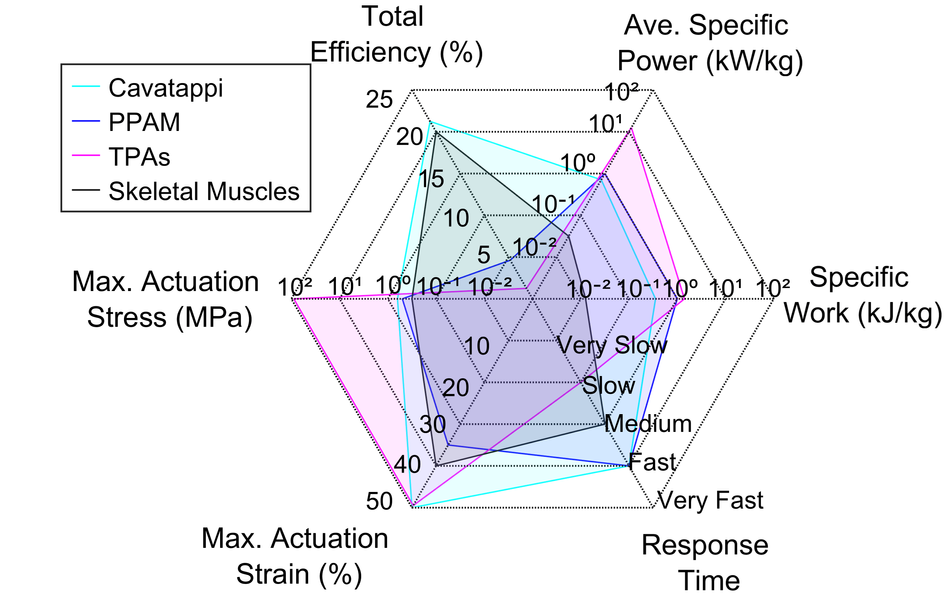 Fig. 3. Artificial muscles performance comparison along with those skeletal muscles.

Our team believes that this technology could be used in soft robotics applications, conventional robotic actuators (for example, for walking robots), or even potentially in assistive technologies like exoskeletons or prostheses. So far, we have presented a few demonstrations (robotic hand and arm); however, their simplicity, low-cost ($0.9/m of cavatappi muscle), lightweight, flexibility, efficiency will allow their fast development and we expect to see that future work will include the use of cavatappi artificial muscles in many applications. 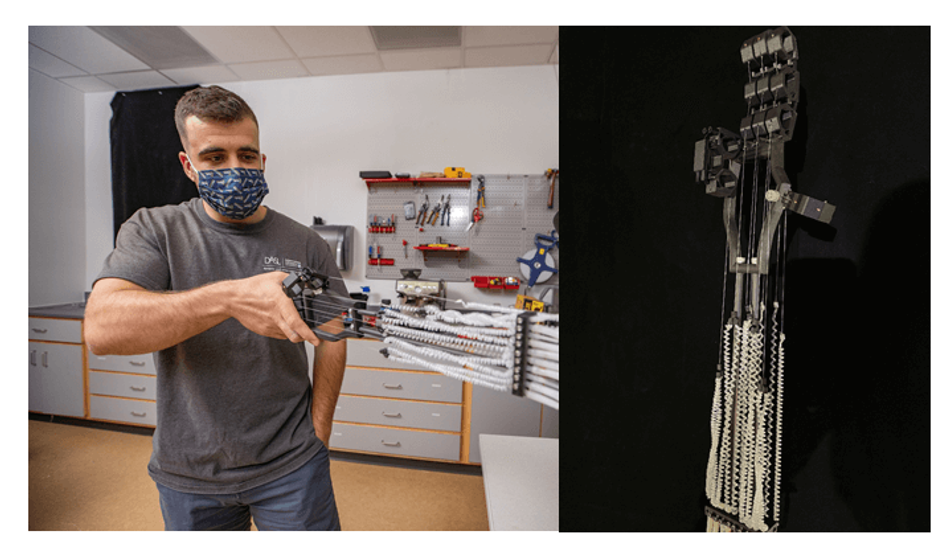 What problem does our project solve?

As there is a new tendency for robots to transition to more biological forms that allow for safer human-robot interactions, new soft actuation technologies are emerging fast. Although traditional robots powered by electric motors or hydraulic pistons can fulfill most of the tasks found in the industry, their rigid form limits how they can be deployed in biomimetic applications. This limitation sets boundaries between human and robot interactions, integrations, and even augmentations safely.

The flexibility of cavatappi will allow them to be used on applications over corners/joints such as a knee, elbow, or ankle because they can be placed under a curved deformation and still actuate. Their simplicity also presents an advantage in applications. Because cavatappi are fabricated from soft PVC tubing, the same tube length could consist of sections where the drawn precursor tube is coiled-twisted, straight-twisted, or simply kept as the original straight drawn configuration. Hence, a single tube length with a coiled section in the middle could serve as (1) the plumbing from the pressure source, (2) the actuator, and (3) the tendon running to the point of force application. Such an implementation would decrease the overhead mass and complexity from fittings, increase reliability by eliminating leaks, and decrease maintenance.

Finally, cavatappi artificial muscles present minimal or negligible volumetric changes during actuation, which would make them volumetrically efficient when configures in parallel, similar to those muscles’ fiber bundles found in nature.

What is the current state of the sector?

Interest in emulating the properties of biological muscles that allow for fast adaptability and control in unstructured environments has been of interest in the past few decades. The field of soft robotics is evolving rapidly as new soft actuator designs are created every year with the goal to guarantee a world where humans and robots can partner up to improve people’s lives.

The main challenges in the sector are on controlling these new soft actuation technologies because material-based models can be complicated to achieve since some of these actuators present viscoelastic effects, similar to biological muscles. However, the trade-off is totally fair as such material properties are the key factors that allow soft actuators to mimic the desired actuation properties of biological muscles.

In general, accurate models and control strategies have started being presented in the past few years, and promising advances have been done in this field.

Who is working on this project?

This research has been conducted at the Dynamic and Active Laboratory by Diego Higueras-Ruiz, a graduate bioengineering Ph.D. student at Northern Arizona University under the advising of Michael Shafer and Heidi Feigenbaum.

"As the principal researcher of this project, I would like to inspire other students to believe in their innovative/crazy ideas and always give them a try. In my case, I believed that flexible polymer tubes could be processed to create artificial muscles and after many attempts, I found a way to fabricate useful biomimetic actuators”. Diego said.

Technology is available for licensing opportunities. 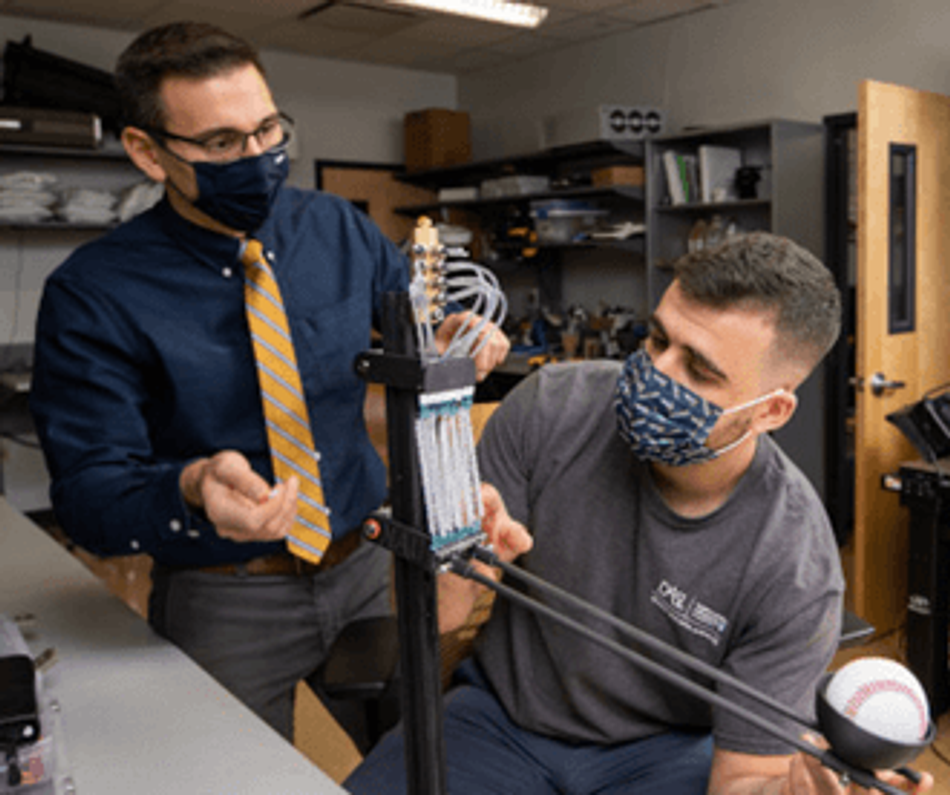