In the last decade, robots started to use artificial intelligence and deep neural networks to analyze and process data to recognize and predict patterns– later becoming a vital part of the healthcare system. Starting with early detection of diseases, assisting people with disabilities, provision of telemedicine services to performance of surgery, robot-assisted surgery is an invasive technique that assists surgeons to perform complicated surgical procedures. However, it is very important to know patients’ perception of having surgical procedures performed on them by robots and what are the reasons for people to trust the robots being used in surgical intervention. In the paper, “Do People Trust in Robot-Assisted Surgery? Evidence from Europe” the team reports that “as the experience of using robots increases, the predictive coefficients related to information, attitude, and perception of robots become more negative” [1].

Autonomous anastomosis has been one of the challenging soft tissue surgeries as they require intricate imaging, tissue tracking and surgical planning techniques along with precise execution in unstructured environments. While in a laparoscopic setting, these surgeries introduce more challenges as they require high maneuverability and repeatability under limited access and visibility of the target tissue. To solve these challenges faced by surgeons, robot-assisted surgeries play a vital role in reducing complexity and improving efficiency. A team of researchers affiliated with the University of North Carolina, John Hopkins University in Baltimore and Children’s National Hospital in Washington proposed an enhanced autonomous strategy for laparoscopic soft tissue surgery and demonstrated robotic laparoscopic small bowel anastomosis in phantom and in vivo intestinal tissues.

In the paper, “Autonomous robotic laparoscopic surgery for intestinal anastomosis” the researchers developed a smart tissue autonomous robot (STAR) with several autonomous features including a tissue-tracking system, detecting the breathing motion of tissues, detecting robot tool failure, controlling camera motion and many more [2]. All of these autonomous features make the system highly autonomous in deformable environments unlike the existing works of low autonomy in complex tasks or high autonomy in simpler tasks. The main objective was to increase overall accuracy while reducing operator workload and maintaining safety for patients to trust robot-assisted surgeries.

Another contribution made by the researchers is a machine learning technique to track tissue movement in response to patient breathing. This will help the robot to operate under motion constraints which lacked in the previous work for open surgical intestinal anastomosis [3]. “We demonstrate implementation of such soft tissue robotic surgeries in a series of in vivo survival studies via porcine models for laparoscopic bowel anastomosis,” the team notes in the research article. 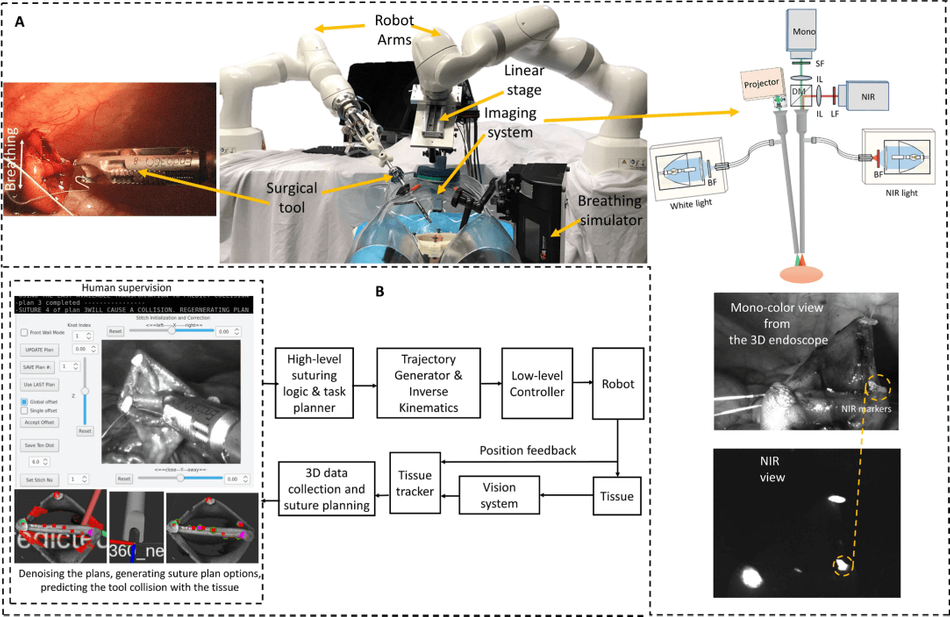 The STAR architecture consists of a KUKA LBR Med robot with integrated motorized Endo 360 suturing tool for robotic suturing and a KUKA LBR Med robot that carries an endoscopic dual-camera system consisting of a NIR camera and a 3D mono-color endoscope. The onboard camera system is incorporated for autonomous tracking of biocompatible NIR markers on the target tissue and constructing a 3D surface of the tissue, which is used for suture planning. The STAR system also allows tracking of the breathing motion of a patient

“The 2D view of the camera was also used as visual feedback for the operator when supervising the autonomous control (Fig. A). The view is provided from the 3D mono-color endoscope when it is not running in the point cloud collection mode, which can be confusing to the operator.”

The general workflow of the enhanced autonomous STAR system starts with initiating a planning sequence using the GUI (Fig. B) that uses a tissue-tracking algorithm to generate two suture plans (for stationary tissue), which are then filtered for noise and STAR predicted tool-tissue collision. Once the plan is approved, the suture placement routine takes place by moving the tool to the location of the first planned suture. As precision is very important for such complex surgeries, the STAR system detects if the change in tissue position is greater than 3mm compared with the current surgical plan, it notifies the operator and goes back to step 1 of initiating a new suture planning.

“In the instances when a planned stitch was not placed correctly or if the suture did not extend across two tissue layers, the operator repeated the last stitch with a slight position adjustment via the GUI before the STAR continued to execute the suture plan. It is worth noting that although direct intervention from the operator was used to correct missed stitches, most of the workflow was completed in an autonomous manner,” the team argues. "This strategy can be expanded in future works whereby the STAR system autonomously detects, adjusts, and repeats a missed stitch to result in a completely autonomous anastomosis procedure."

More details on the performance of the STAR system can be found in the research work available in the ScienceRobotics journal under closed-access terms.

In July, Andrey Filchenkov delivered a talk on machine learning in medicine at a conference at ITMO University. ITMO.NEWS talked to the researcher to learn more about what stands in the way of progress and why machines won’t be able to fully substitute for medical specialists.

On Redundancy And The Unavoidable Trade-offs At Surgical Robotics

Cutting surgical robots down to size