Until recently, conventional robots have utilized rigid materials and fabrication methods. Ironically, traditional robots are relatively weak and brittle, when compared with biological organisms, which utilize soft adaptive tissues to produce movement. A new approach to robotics has taken shape in the form of soft robotics and biomimicry.

So, what does “soft” robotics mean? If you ever stayed up late as a child and remember watching old science fiction movies, as I did, your immediate concept of a “Robot” is typically a large, metal creature, lumbering about. In sharp contrast to this classic robot concept, soft robots are flexible and agile; think of a ballerina or an athlete. Obviously, modern robots have advanced from this stereotype, however our best robot is still not capable of the nuanced movements and physical strength of a human.

A key component to producing a robot that more closely replicates the movement of a human, starts with the actuation system. An actuator is any mechanism that can convert some form of energy into physical movement, similar to how our muscles work. Typically, servo motors are used to produce movement in most robotic systems. However, servo motors are bulky, have a low power to weight ratio(when compared to muscle tissue) and are non-compliant. Essentially, compliance of a material means that it has some give to it, like a rubber band. You may not realize it, but the human body is capable of withstanding incredible forces.

As demonstrated at the 2015 DARPA Robotics Challenge, a humanoid robot struggled to accomplish physical tasks that any average human would be able to do with ease. Common bumps and bruises that humans experience, would be catastrophic to most modern robots. Our ability to adapt to different physical environments is the template that will be used to create future robots.

Engineers have sought a multitude of materials and fabrication methods in order to replicate the attributes of biological muscle tissue. I have also spent close to 20 years attempting to create an artificial muscle actuator, with limited success. So, what makes muscle tissue so special and replication of its attributes so elusive? Well, for starters, nature has had a 560 million year head start. Additionally, each of our muscles is a compact and powerful actuator that is made of soft, self-healing tissue. Our muscle tissue affords us dynamic movement and uses an efficient chemical fuel as a power source, glucose. Muscle tissue is composed of thousands of contractile fibers-within each fiber are up to 100,000 molecular units that synchronously shorten in length with a tremendous amount of force and velocity. This force and velocity enables basic movement and locomotion.

Extensive research has been conducted to create an artificial muscle actuator which can replicate or exceed biological muscle tissue, with varying levels of success. Several types of technologies that have been explored include: Electroactive polymers (EAPs), Shape-memory metal alloy wires/liquid crystalline elastomers (SMAs), the Mckibben air muscle (Pneumatic artificial muscles), nylon fiber (torsional actuators) and Carbon fiber (PDMS rubber/torsional actuators). While all of these types of artificial muscle actuators, possess some of the sought after attributes of biological muscle, none of them are a complete solution in and of themselves. In order to fully appreciate the vast landscape of artificial muscle research and current innovations-each of these technologies will be further discussed; including history, fabrication techniques, advantages, drawbacks and future applications. 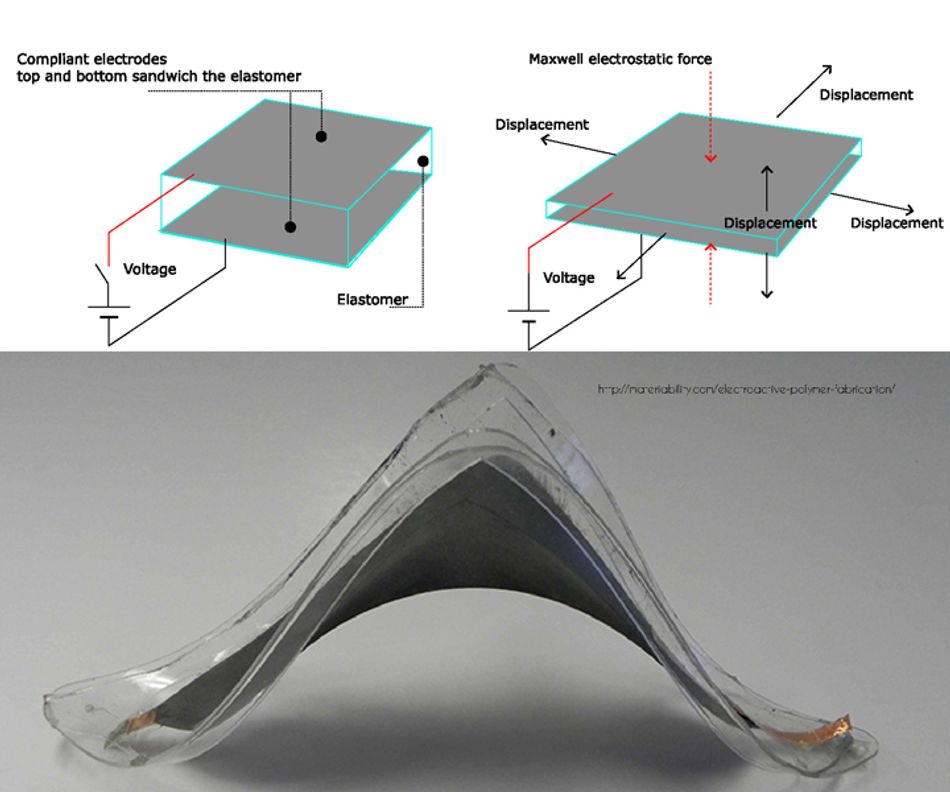 EAP technology is based upon the principle of generating a motive force in polymeric materials via an applied electrostatic field. One of the basic principles behind this technology is static electricity, if you have ever heard the crackle when you remove laundry from the dryer or accidentally, “shocked” your friend when walking, you have experienced static electricity. The electroactive effect occurs when a high voltage is
applied to a flexible material, the electric static field that is generated is strong enough to produce movement in the material.

While EAPs can embody, several permutations, the main focus of this discussion will be on the most commercially viable configurations which include, dielectric elastomers and ionic polymer-metal composites. EAP research started as early as the 1800s, however it wasn't until the turn of the century that EAP technology was realized for practical applications.

Dielectric elastomeric architecture involves an elastomeric film or cross sectional area of polymeric material, coated with an electrically conductive layer on either side. This configuration yields a compliant capacitor, where in, the conductive coating serves as a pair of electrodes. When an electrical field is applied to the DEA, changes in the electric field distribution of the electrodes generate a mechanical strain via Coulombic charge interaction of the compliant electrodes. Essentially, the conductive electrodes become
electrostatically attracted and repelled in specific regions, causing the material to compress and expand. Additionally, the strain deformation state can be held in a static position via a constant DC voltage; analogous to an isometric muscle contraction.

Composition of a DEA is relegated to a suitable elastomeric material with high elastic modulus; typically silicone or acrylic elastomers are used. During the fabrication process, elastomeric film of a predetermined thickness, is stretched upon a rigid frame in order to provide bidirectional static prestrain(stretch) of the elastomeric film. This prestrain fabrication technique has been shown to significantly increase the  mechanical efficiency and responsiveness of DEAs. The electrically conductive coating, typically comprises conductive carbon grease or paste, applied to either side of the elastomeric film to provide diametrically opposed electrodes. This fabrication process can also be repeated several times, with each elastomeric film/electrode layer, “stacked” onto the subsequent layer in order to provide an actuator capable of exerting much larger forces.

IPMC actuators are characterized by synthetic polymers engineered with positively charged metal ions, which are randomly arranged in an aqueous, polymer matrix. Typically, a noble metal coating is applied to the polymer-metal matrix in order to provide positive/negative electrodes(orientation of cathode/anode is based upon the terminal electrical wires attachment). If you remember from Chemistry class, noble
elements are those that do not play well with other elements or resist chemical interaction. The positive metal ions partially entangle with water molecules and any inherent, negatively charged ions within the polymer matrix. When an electrical field is applied, the conjugated metal ions are attracted to the negatively charged metal electrode. This ionic migration of entangled water molecules provides an osmotic pressure shift resulting in mechanical strain across the polymer matrix membrane. Conversely, mechanically bending or deformation of the polymer matrix can produce electrical potential and output voltage, which can be advantageous for energy harvesting and biomedical sensors.

Edge Over Other Actuators

Possessing many biomimetic attributes has warranted continued research into EAPs development. Similar to biological muscle tissue, Dielectric Elastomers have an inherent ability to store large amounts of mechanical energy and contract with a large amount of usable force. Another appealing attribute is measured by how well an actuator can operate under continued stress and adaptability under varied conditions. A crucial element when considering building a humanoid robot that can work along side humans. With this in mind, DEAs have been shown to operate within standard room conditions, without the need for additional considerations. A crucial element for any biomimetic actuator is the ability to respond quickly when activation stimuli is applied, DEAs continue to excel with rapid response activation times measuring in the milliseconds.

Additionally, Ionic Polymer-Metal Composites bring a unique set of properties to the table, including bi-directional actuation. Dependent upon the polarity of the activation voltage applied, IPMCs can reverse actuation direction, contributing further to adaptable mobility. Due to the unique chemistry of IPMCs, the mechanism of movement is attributed mostly to molecular motion, which allows for low activation voltages. An attribute that is extremely appealing in the quest to create a sustainable, autonomous
robot. Configuration of IPMCs is not only constrained to simple membranes. There complaint nature allows the material to be rolled up into compact cylinders, with the ability to bend or extend. A quality that is important in order to approximate various muscle shapes and sizes, inherent in biological organisms. 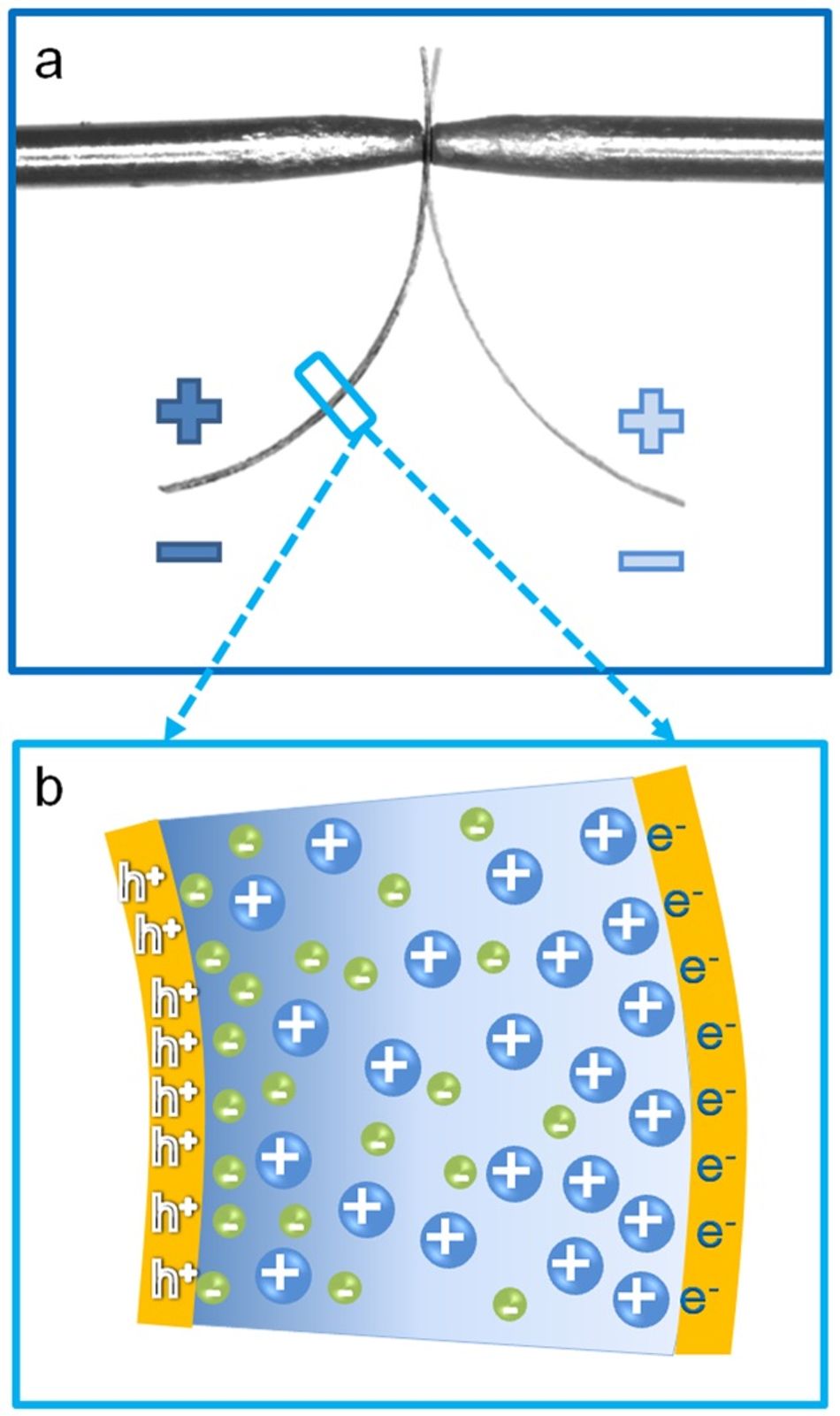 (a) Optical image of the bending actuation of the EAP actuator under AC electric
signals.

(b) Schematic of bending actuation mechanism.

Challenges In The Field

While EAPs do posses several remarkable properties, we must also evaluate the engineering challenges faced in the development of EAPs for practical applications. One such hurdle to overcome for any robotic system is power consumption, especially within the context of realizing a self-contained humanoid robot. Unfortunately, this is a major con for DEAs, which require thousands of volts of electricity to operate. With the current state of battery technology this is far from ideal. EAP longevity is also limited due to the high voltage field, often exceeding the breakdown threshold of the polymer material. While IPMCs require minimal activation voltage, additional considerations are required for typical usage. Ironically, not unlike a biological muscle, IPMCs also require encapsulation in an impermeable membrane to prevent dehydration of the polymer matrix. In addition to IPMCs low actuation force, the most critical disadvantage remains
the current inability to commercially, mass produce, a consistent ionic polymer. Until these challenges can be overcome, a viable EAP artificial muscle actuator remains elusive.

What's in store for EAP technology? While an EAP based artificial muscle actuator seems unlikely in the immediate future. EAP technology is currently in development towards, biomechanical energy harvesting. Specifically, IPMC films can be attached to key flexing areas of the human body in order to harvest kinetic energy.
So, next time you go to the gym, you can burn calories and charge your cell phone. This technology could
also turn out to be invaluable for Soldiers in the midst of combat with little to no recharge options. The structure and mechanism of DEAs has found a practical application within the realm of virtual reality systems. An array of actuator “pixels” can be utilized for graphic displays for the visually impaired and possibly for theme park applications, such as virtual-haptic, hybrid environments. The National Science Foundation is continuing research towards an artificial muscle application, however. With the aid of 3-D printing technology, IPMC technology may prove to one day be a suitable artificial muscle solution. This is the first article in a series about artificial muscles, created by Samuel Manriquez.

How to design and control robots with stretchy, flexible bodies

Optimizing soft robots to perform specific tasks is a huge computational problem, but a new model can help.

Interesting discussion with Hod Lipson, the head of Creative Machines Lab, Columbia University in New York. In this episode, Can robots be Self-aware? Can robots design other robots and self-repair? Why should we evolve robots to do tasks that animals do so well?

EPFL engineers have developed a silicone raspberry that can help teach harvesting robots to grasp fruit without exerting too much pressure.