Free space optical communication has attracted considerable attention from researchers for a variety of applications. Because of the complexity associated with the existing modulation techniques such as amplitude, phase, and frequency modulation, free-space optical communication systems use intensity modulation with direct detection [1,2]. Several applications such as wide-field lock-in detection for sensitive measurements, mode-locking in lasers, and phase-shift time-of-flight imaging (LiDAR) today require the intensity of the free-space signal to be modulated for a single frequency. However, specific applications typically require a particular frequency at which the signal should be modulated, but for many applications a higher frequency is desirable.

Generally, these single-frequency free space intensity modulations should exhibit low optical insertion loss, high modulation efficiency, and a larger acceptance angle. Achieving all of these parameters at megahertz frequency can be challenging. For modulation at gigahertz frequency, the existing research work shows that Bragg cells-based approach has a narrow acceptance angle, electroabsorption modulators (using the quantum-confined Stark effect) have limited modulation efficiency, and Pockel cells (longitudinal and transverse) require bulky crystals. A team of researchers affiliated with the Stanford University, California and Chalmers University of Technology, Gothenburg have carried out work to design a new single-frequency free-space intensity modulator that can achieve a wide acceptance angle, a lower insertion loss, and improved modulation efficiency in the megahertz frequency range [3].

“Existing lidar systems are big and bulky, but someday, if you want lidar capabilities in millions of autonomous drones or in lightweight robotic vehicles, you’re going to want them to be very small, very energy efficient, and offering high performance,” explains Okan Atalar, a doctoral candidate in electrical engineering at Stanford and the first author on the new paper in the journal Nature Communications that introduces this compact, energy-efficient device that can be used for lidar. 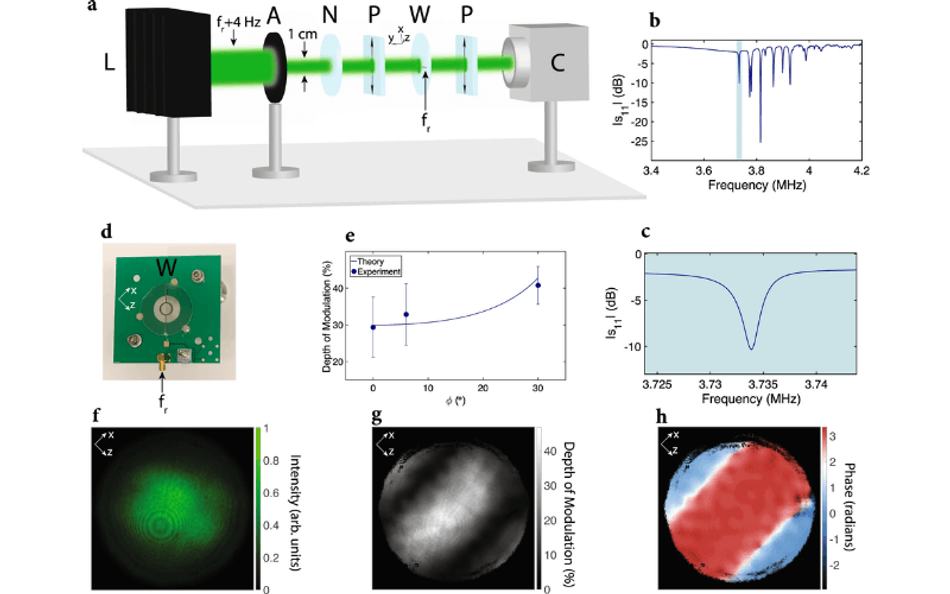 “Critically, lithium niobate is piezoelectric. That is when electricity is introduced through the electrodes, the crystal lattice at the heart of its atomic structure changes shape. It vibrates at very high, very predictable, and very controllable frequencies. And, when it vibrates, lithium niobate strongly modulates light – with the addition of a couple of polarizers, this new modulator effectively turns light on and off several million times a second,” the team explains in the Stanford University blog post. “What’s more, the geometry of the wafers and the electrodes defines the frequency of light modulation, so we can fine-tune the frequency,” Atalar says. “Change the geometry and you change the frequency of modulation.”

In the experimental setup to demonstrate the intensity modulation, they coated the top and bottom surfaces of a double-sided polished LN wafer with tin oxide (ITO) to behave as transparent surface electrodes. To measure and verify the intensity modulation efficiency and that the acoustic mode profile matches the simulation, the coated wafer is placed between the optical polarizers along with a laser beam of 532nm wavelength is passed through the polarizer, wafer electrode region, and polarizer as shown in the figure. 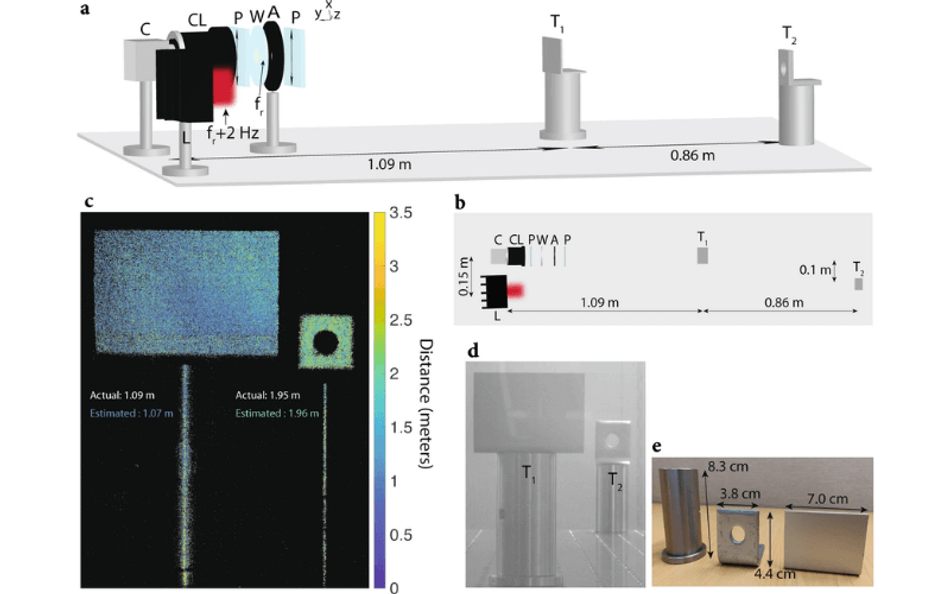 The proposed design of the intensity modulator is used for a phase-shift-based ToF imaging of which the setup consists of a standard camera and a modulator. The targets in the scene at different distances reflect back to the receiver with different phases that are related to the distance, space of light in the air, and the intensity modulation frequency. A laser of 635nm wavelength is intensity-modulated at 3.733702 MHz and is used to illuminate the target. The proposed intensity-modulator is located between two optical polarizers. With the ToF imaging setup, the target distances are measured to centimeter-level accuracy.

“The impact for the proposed modulator is enormous; it has the potential to add the missing 3D dimension to any image sensor, they say. To prove it, the team built a prototype lidar system on a lab bench that used a commercially available digital camera as a receptor. The authors report that their prototype captured megapixel-resolution depth maps while requiring small amounts of power to operate the optical modulator.”

“A future of small-scale lidar with standard image sensors – and 3D smartphone cameras – could become a reality,” Atalar said noting the future works to reduce energy consumption by at least 10 times the threshold reported in the paper.

With some foresight, most CAD design layout packages can accommodate castellated edge designs.

LiDAR is a technique used for measuring distances with laser light. In a study published in Nature, researchers at EPFL show a new way to speed up a type of LiDAR engine by using photonic circuits.