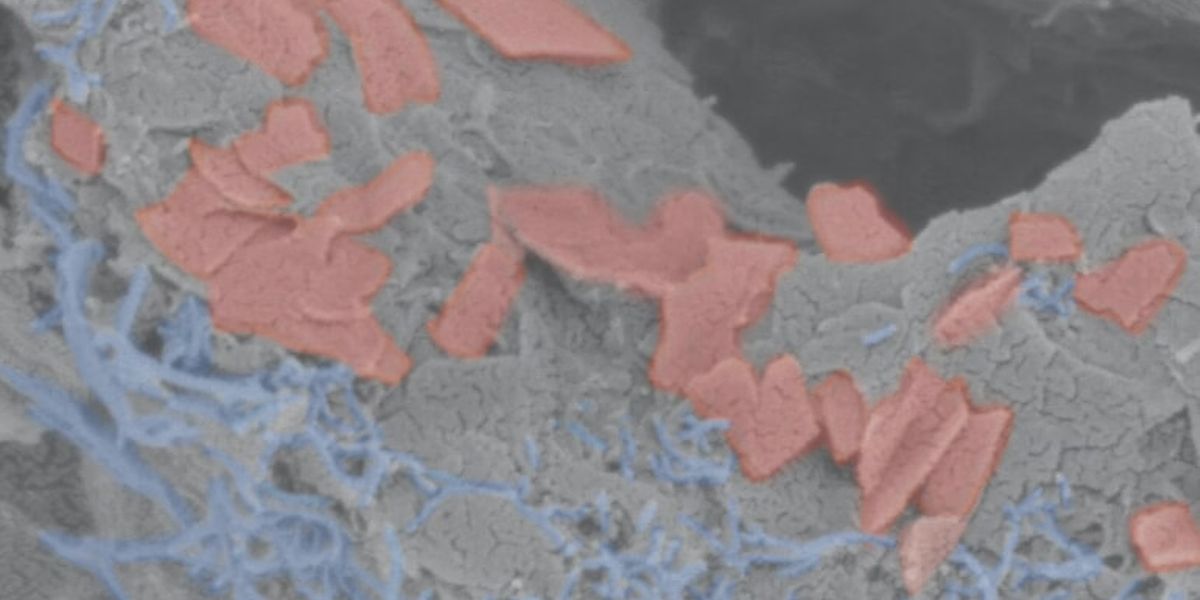 The scaffold consists of a soft hydrogel (gray) that contains carbon nanotubes (blue) and graphene flakes (red) as conductive materials to transmit electrical impulses throughout the scaffold. (Wyss Institute at Harvard University)

Hydrogel-based scaffolds could be used for better brain-computer interfaces

Brain-computer interfaces (BCIs) are a hot topic these days, with companies like Neuralink racing to create devices that connect humans’ brains to machines via tiny implanted electrodes. The potential benefits of BCIs range from improved monitoring of brain activity in patients with neurological problems to restoring vision in blind people to allowing humans to control machines using only our minds. But a major hurdle for the development of these devices is the electrodes themselves – they must conduct electricity, so nearly all of them are made of metal. Metals are not the most brain-friendly materials, as they are hard, rigid, and don’t replicate the physical environment in which brain cells typically grow. 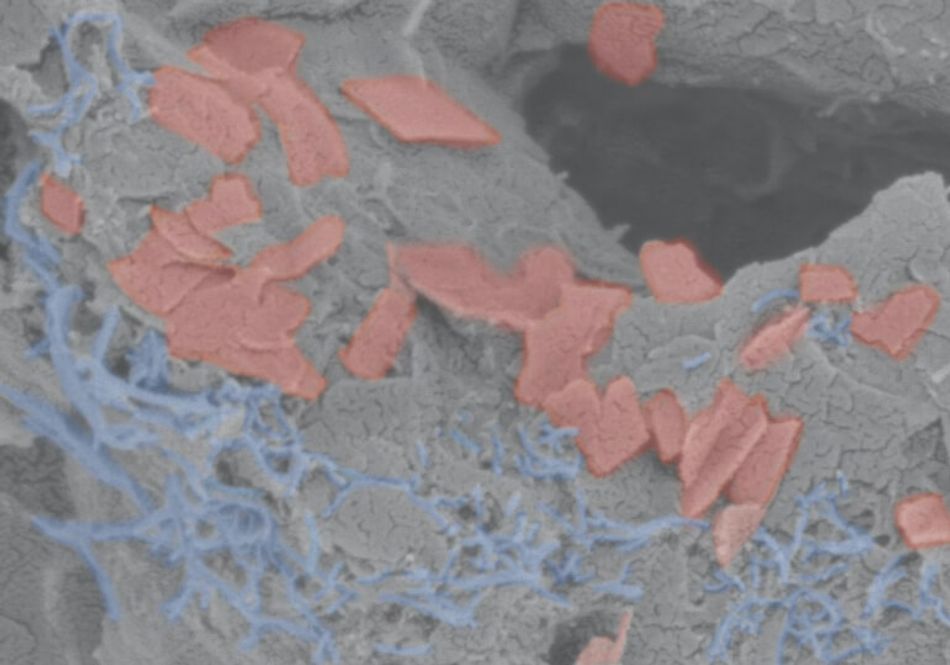 The scaffold consists of a soft hydrogel (gray) that contains carbon nanotubes (blue) and graphene flakes (red) as conductive materials to transmit electrical impulses throughout the scaffold. (Wyss Institute at Harvard University)

That problem now has a solution in a new type of electrically conductive hydrogel scaffold developed at the Harvard John A. Paulson School of Engineering and Applied Sciences (SEAS), the Wyss Institute at Harvard University, and MIT. Not only does the scaffold mimic the soft, porous conditions of brain tissue, it supports the growth and differentiation of human neural progenitor cells (NPCs) into multiple different brain cell types for up to 12 weeks. The achievement is reported in Advanced Healthcare Materials.

“This conductive, hydrogel-based scaffold has great potential. Not only can it be used to study the formation of human neural networks in vitro, it could also enable the creation of implantable biohybrid BCIs that more seamlessly integrate with a patient’s brain tissue, improving their performance and decreasing risk of injury,” said first author Christina Tringides, Ph.D. ‘22, a former graduate student at the Wyss who is now a Postdoctoral Fellow at ETH Zürich.

Out of one, many

Tringides and her team created their first hydrogel-based electrode in 2021, driven by the desire to make softer electrodes that could “flow” to hug the brain’s natural curves, nooks, and crannies. While the team demonstrated that their electrode was highly compatible with brain tissue, they knew that the most compatible substance for living cells is other cells. They decided to try to integrate living brain cells into the electrode itself, which could potentially allow an implanted electrode to transmit electrical impulses to a patient’s brain via more natural cell-cell contact.

To make their conductive hydrogel a more comfortable place for cells to live, they added a freeze-drying step to the manufacturing process. The ice crystals that formed during the freeze-drying forced the hydrogel material to concentrate in the spaces around the crystals. When the ice crystals evaporated, they left behind pores surrounded by the conductive hydrogel, forming a porous scaffold. This structure ensured that cells would have ample surface area on which to grow, and that the electrically conductive components would form a continuous pathway through the hydrogel, delivering impulses to all the cells.

The researchers varied the recipes of their hydrogels to create scaffolds that were either viscoelastic (like Jell-O) or elastic (like a rubber band) and soft or stiff. They then cultured human neural progenitor cells (NPCs) on these scaffolds to see which combination of physical properties best supported neural cell growth and development. 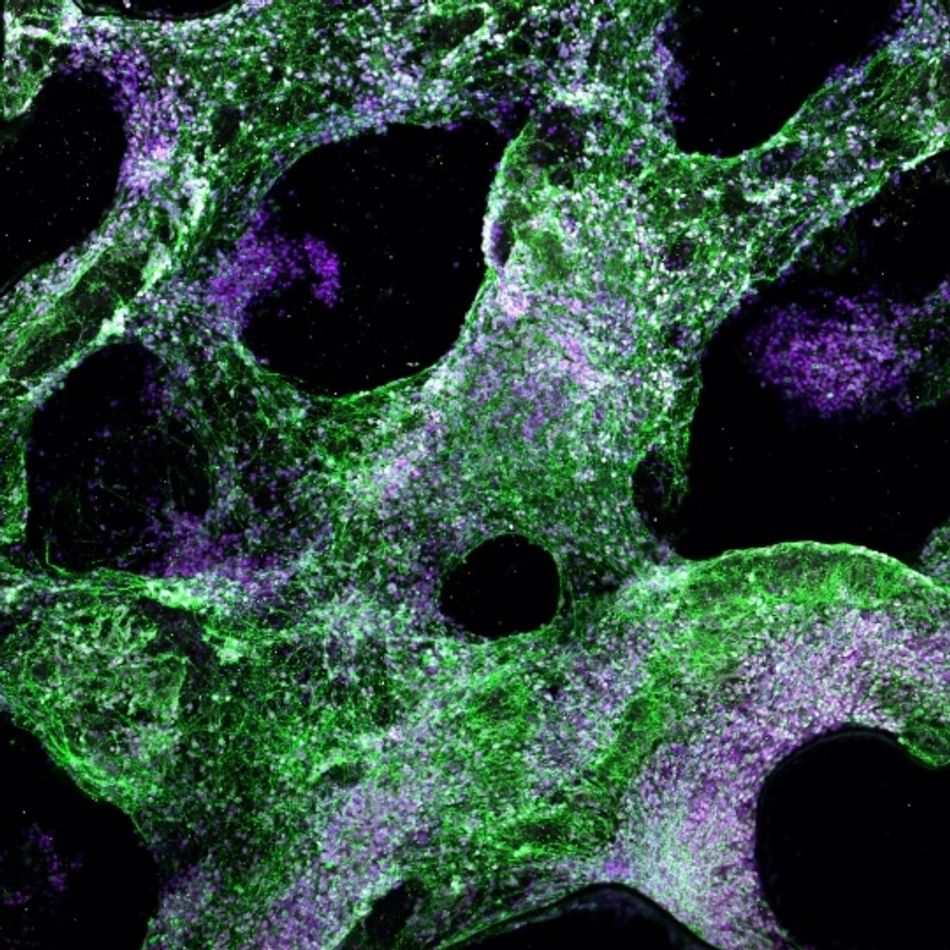 When grown on a viscoelastic hydrogel scaffold, human neural progenitor cells differentiate into multiple cell types that are found in the human brain, including oligodendrocytes (green) that produce myelin (white). (Wyss Institute at Harvard University)

NPGs grown on gels that were viscoelastic and softer formed networks of lattice-like structures on the scaffold and differentiated into multiple cell types with specific features after five weeks. Cells that were cultured on elastic gels, in contrast, had formed clumps that were largely composed of undifferentiated NPCs. The team also varied the amount of conductive materials within the hydrogel material to see how that affected neural growth and development. The more conductive a scaffold was, the more the cells formed branching networks (as they do in vivo) rather than clumps.

The researchers then analyzed the different cell types that had developed within their hydrogel scaffolds. They found that astrocytes, which support neurons both physically and metabolically, formed their characteristic long projections when grown on viscoelastic gels vs. elastic gels, and there were significantly more of them present when the viscoelastic gels contained more conductive material. Oligodendrocytes, which create the myelin sheath that insulates the axons of neurons, were also present in the scaffolds. There was more total myelin and longer myelinated segments on viscoelastic gels than on elastic gels, and the thickness of the myelin increased when there was more conductive material present in the gels.

Finally, the team applied electrical stimulation to the living human cells via the conductive materials within their hydrogel scaffold to see how that impacted cell growth. The cells were pulsed with electricity for 15 minutes at a time, either daily or every other day. After eight days, the scaffolds that had been pulsed daily had very few living cells, while those that had been pulsed every other day were full of living cells throughout the scaffold.

Following this stimulation period, the cells were left in the scaffolds for a total of 51 days. The few cells left in the scaffolds that had been stimulated daily did not differentiate into other cell types, while the every-other-day scaffolds had highly differentiated neurons and astrocytes with long protrusions. The variation in electrical impulses tested did not seem to have an effect on the amount of myelin present in the gels.

Tringides is continuing work on the conductive hydrogel scaffolds, with plans to further investigate how various types of electrical stimulation could affect different cell types, and to develop a more comprehensive in vitro model. She hopes that this technology will one day enable the creation of devices that help restore function in human patients who are suffering from neurological and physiological problems.

“This work represents a major advance by creating an in vitro microenvironment with the right physical, chemical, and electrical properties to support the growth and specialization of human brain cells.  This model may be used to speed up the process of finding effective treatments for neurological diseases, in addition to opening up an entirely new approach to create more effective electrodes and brain-machine interfaces that seamlessly integrate with neuronal tissues. We’re excited to see where this innovative melding of materials science, biomechanics, and tissue engineering leads in the future,” said the Wyss Institute’s Founding Director Don Ingber, M.D., Ph.D. Ingber is also the Judah Folkman Professor of Vascular Biology at Harvard Medical School and Boston Children’s Hospital, and the Hansjörg Wyss Professor of Bioinspired Engineering at SEAS.

Neurofeedback Gets You Back in the Zone

Brainsight startup develops neurotechnology-based playtesting: "We have no time for bad games"

Neurofeedback Gets You Back in the Zone

Brainsight startup develops neurotechnology-based playtesting: "We have no time for bad games"

When they first met at the TUM Think.Make.Start young entrepreneurs program, Vladislav Samoilov and Philipp Zent quickly found common ground: they are both passionate gamers. And now they are also entrepreneurs. Their startup – called Brainsight – could revolutionize the world of playtesting.

One step closer to an adaptive connection with the brain, which makes advanced prostheses and regenerative medicine possible